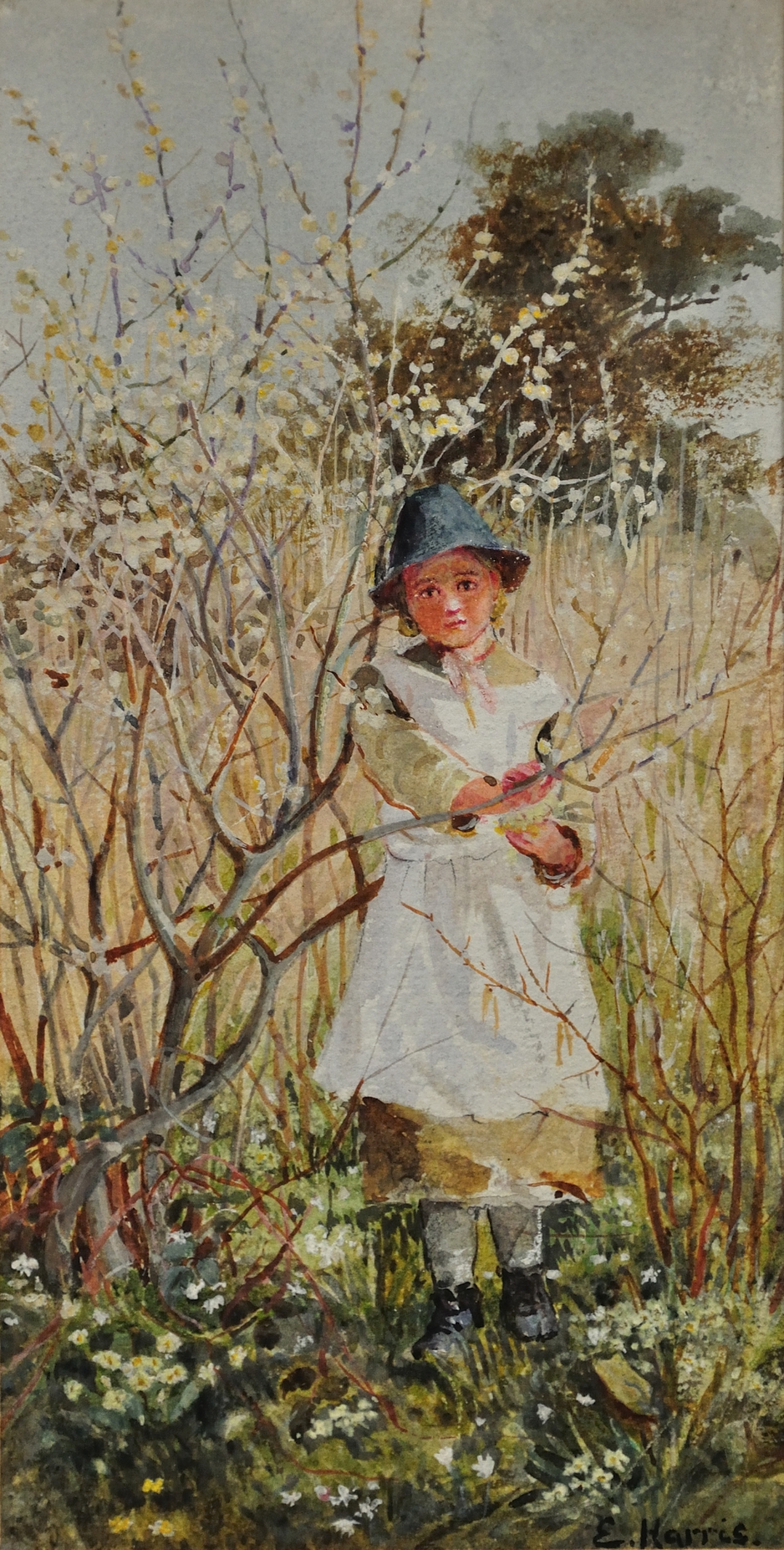 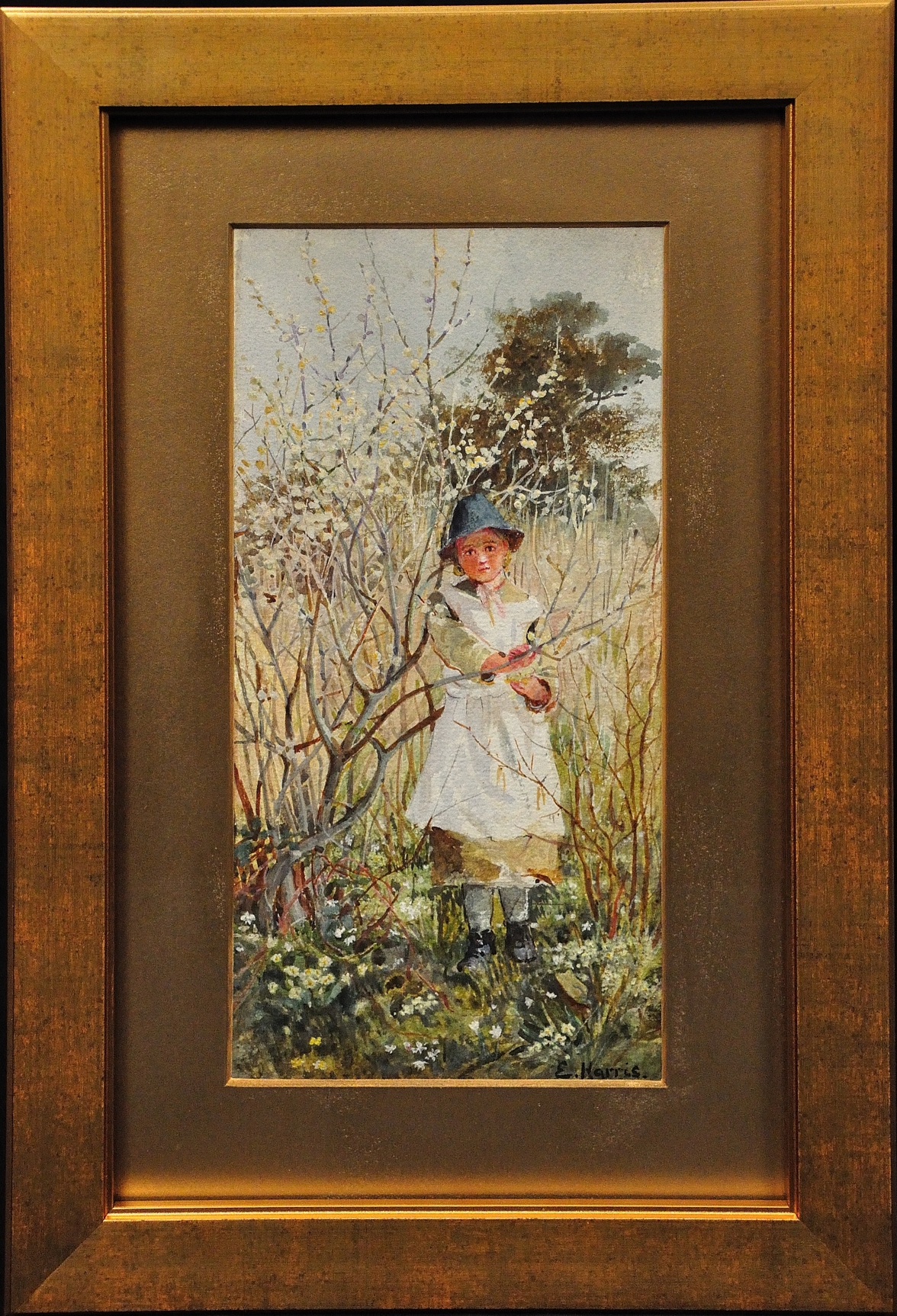 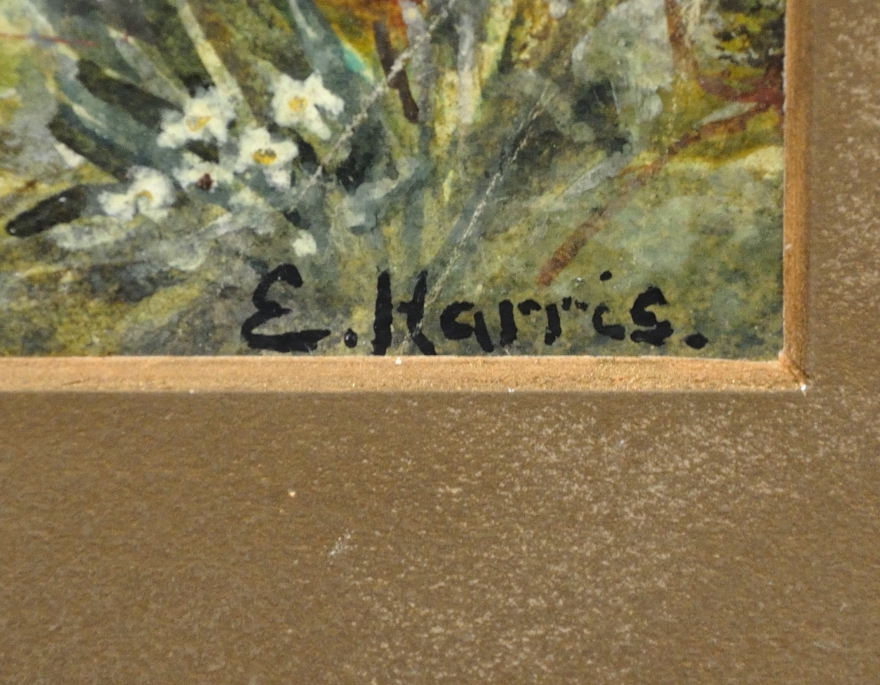 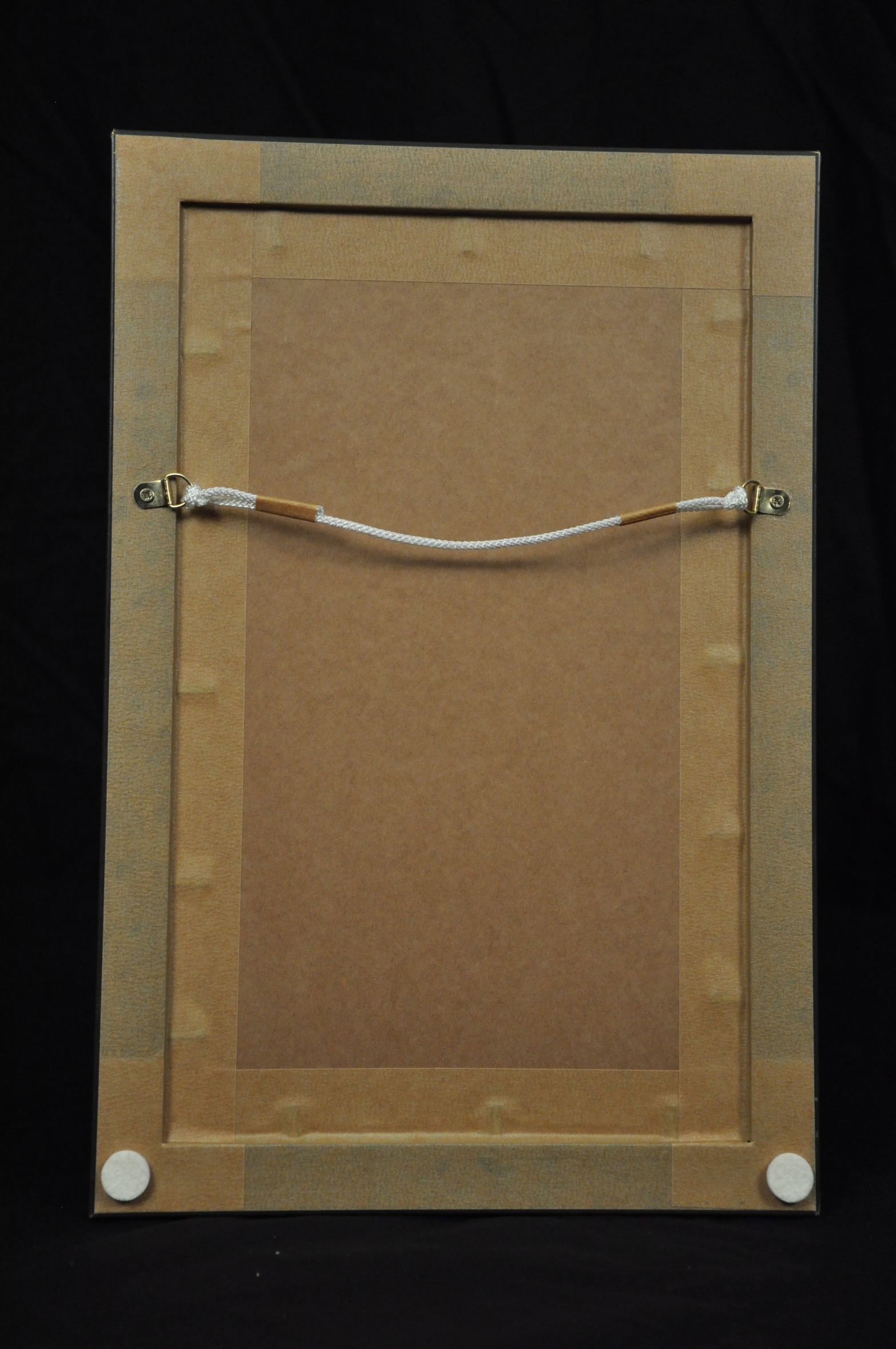 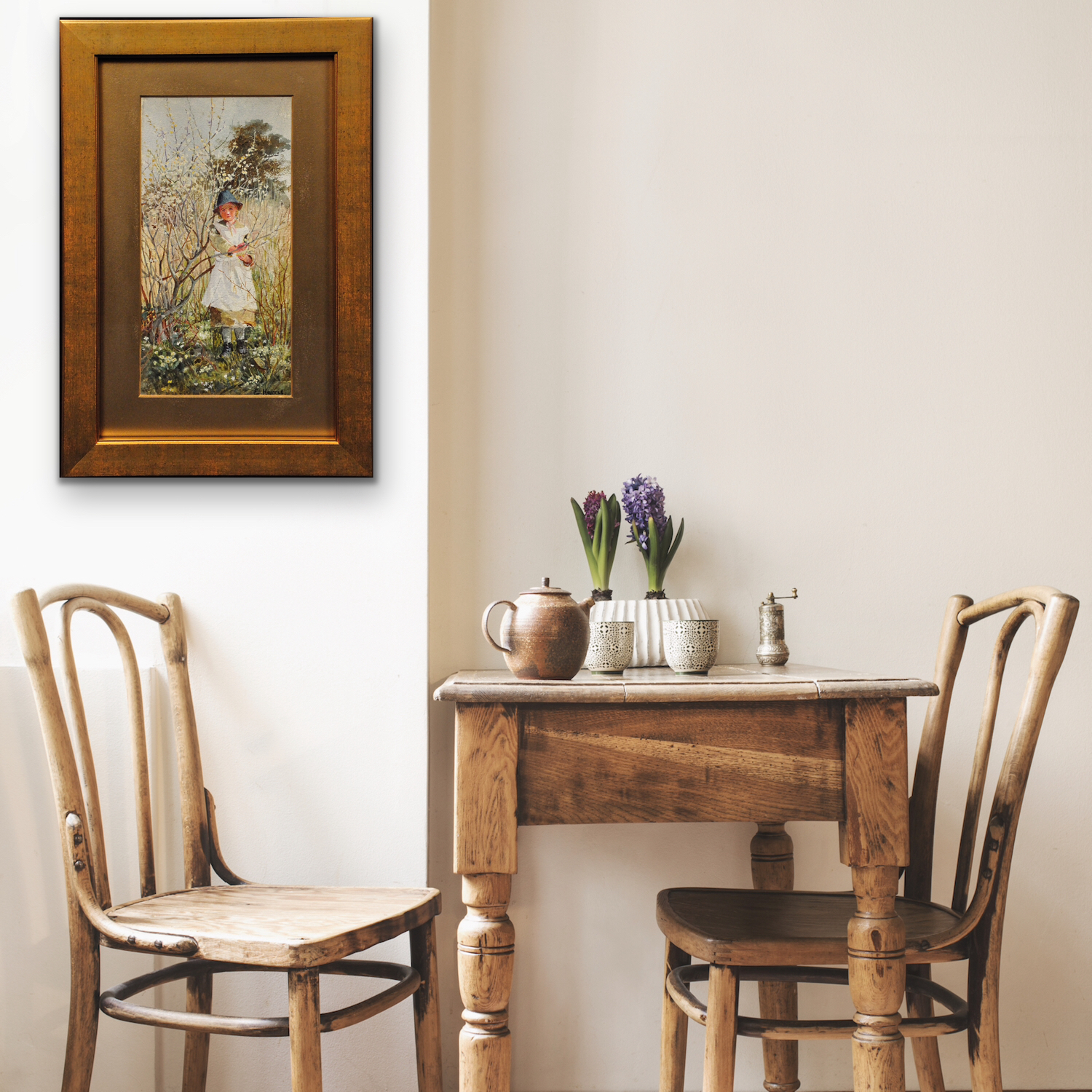 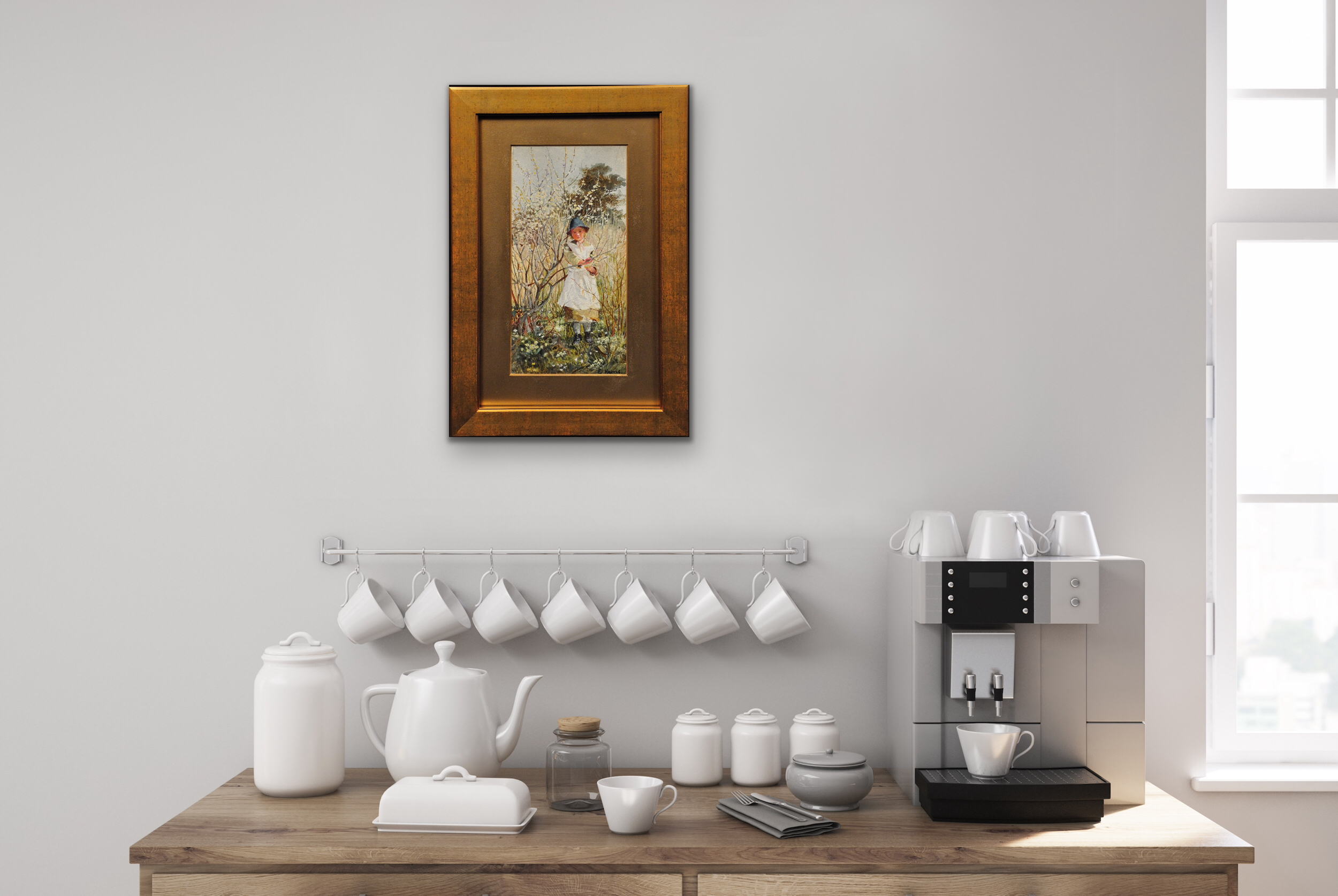 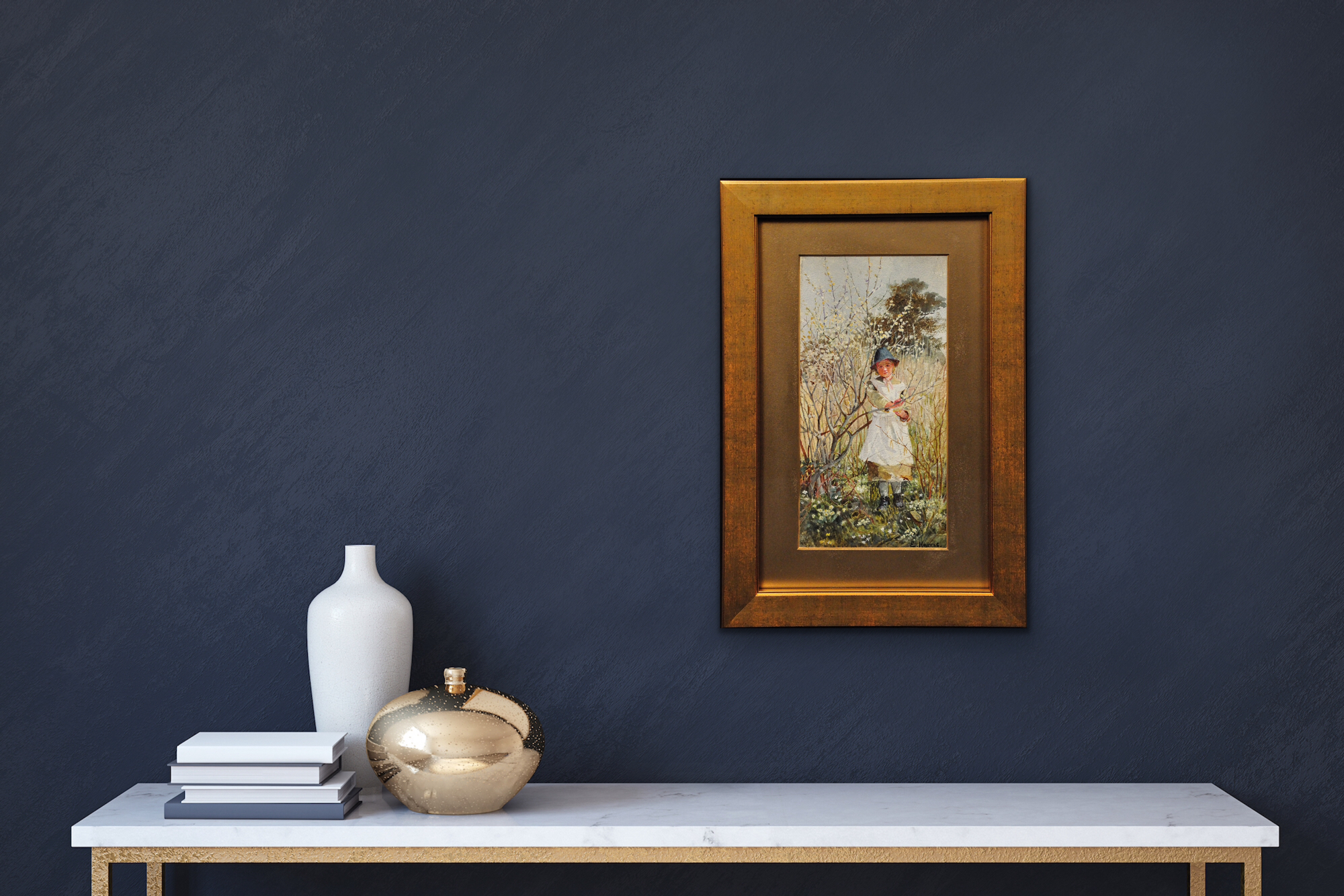 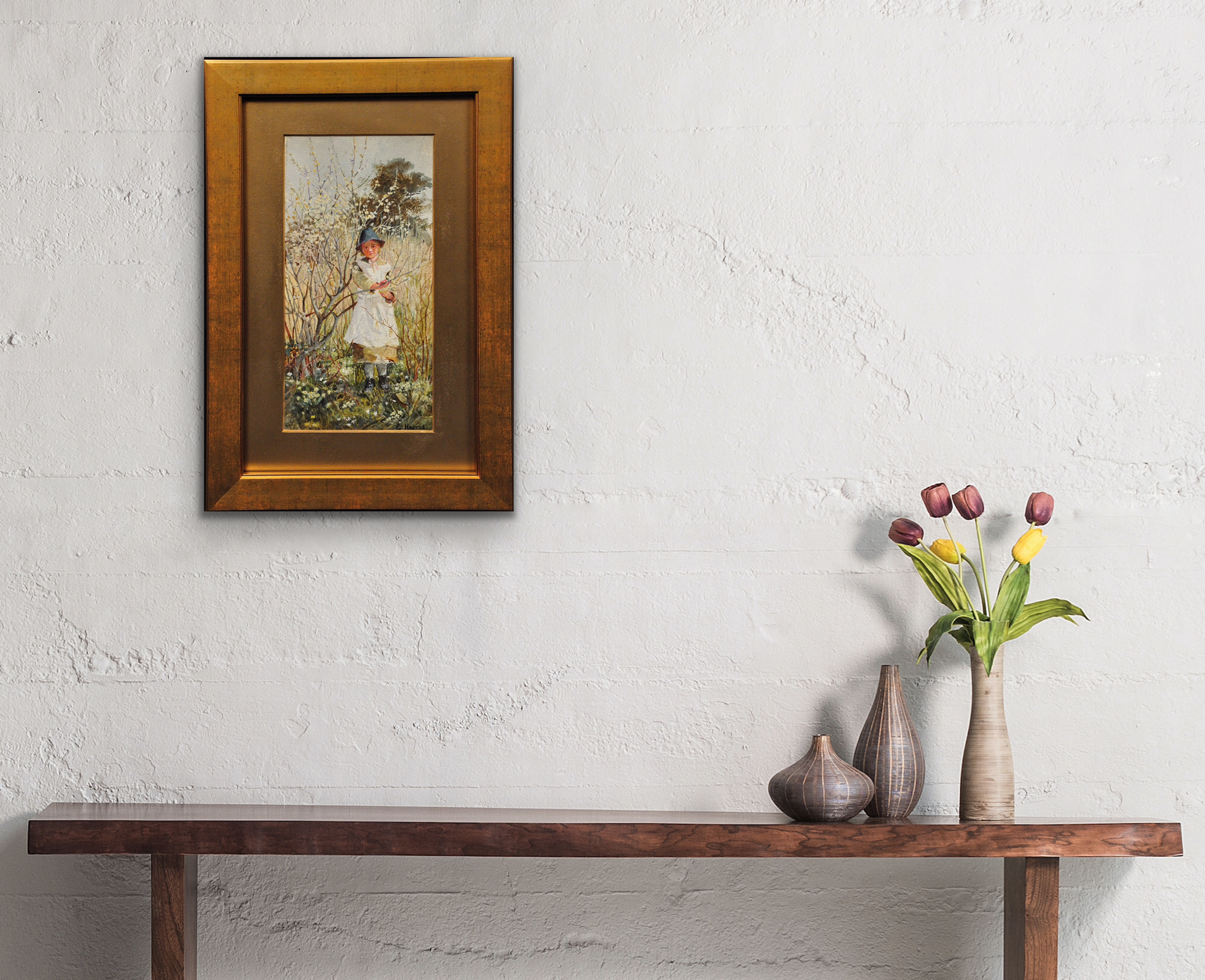 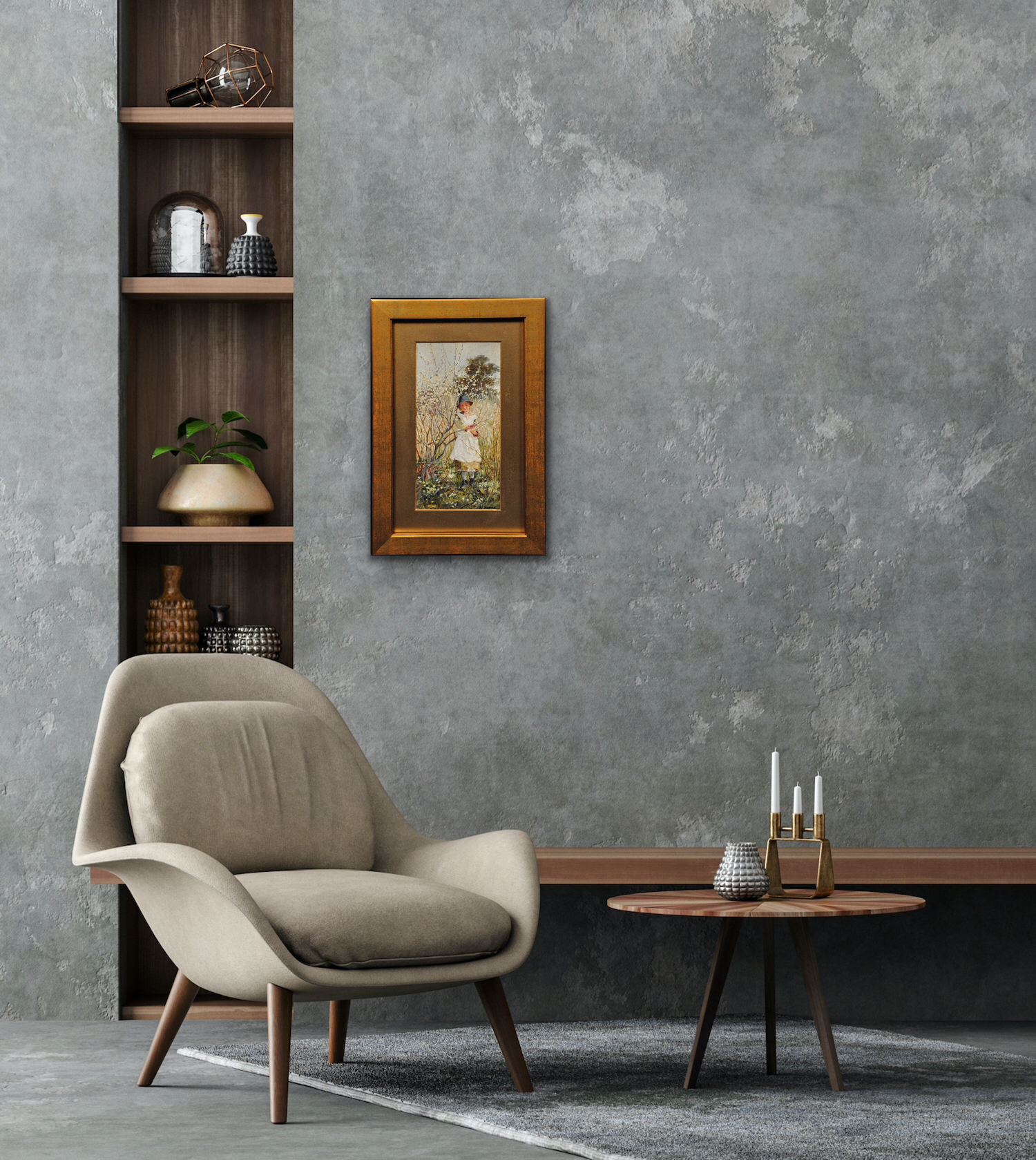 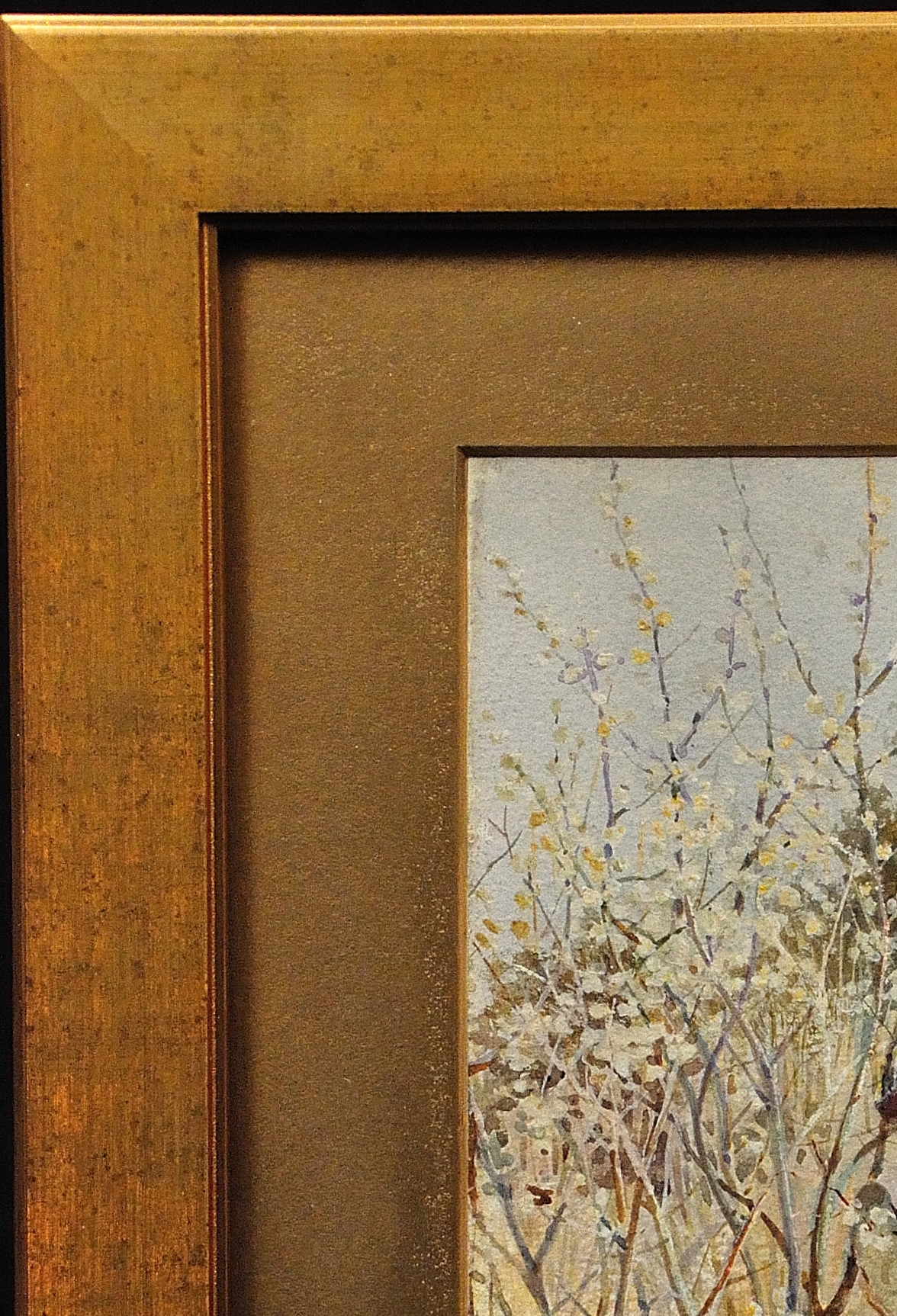 Available for sale from Big Sky Fine Art; this original painting by Edwin Harris dates from the end of the 19th century.
The watercolour is presented and supplied in a sympathetic contemporary frame (which is shown in these photographs), with its’ original mount and behind glass.
This antique painting is in very good condition, commensurate with its age. It wants for nothing and is supplied ready to hang and display.
The watercolour is signed lower right.
Previously with Messrs. S.H. Biles, 120 Victoria Street, Bristol.

Edwin Harris was one of the first pioneers of the Newlyn School of artists, and friends and contemporary of many of the greatest artists of his day. His own style was modest and charming; his works are figurative, or of cottage interiors. His work was exhibited in some of the leading London galleries, including the Royal Academy from around 1882 onwards.

Edwin Harris was born in Ladywood, Birmingham and educated at Old Edgbaston School where he formed a life-long friendship with the artist, William Arthur Breakspeare. At the age of fourteen in 1869 he entered the Birmingham School of Art, where he was a student friend of Walter Langley and then spent two years as an assistant Master, taking private pupils (amongst whom was Kate Bunce) before attending Verlat's Academy, Antwerp in 1880. Other notable artists were his contemporaries here, including William John Wainwright and Frank Bramley.

During his time at Antwerp there Harris began to exhibit small figure studies, which received favourable comment at the exhibitions of the Royal Birmingham Society of Artists, and he was later elected to membership of the Society. On his return to Birmingham in 1881 he took a studio in Paradise Street where Langley and Wainwright were working. It is probably at Harris' studio that the first meetings were held that led to the formation of the Birmingham Art Circle.

Harris first visited Newlyn in Cornwall in 1881 but did not settle at that time. Like many artists of his circle he then spent a couple of summers in Brittany. In 1882 he spent time at Pont Aven, where he met Elizabeth Armstrong (later Forbes) Whilst in France he and his colleagues ran out of money, and undertook portraits of their landlords in lieu of rent.

Harris returned to Newlyn in 1883 with his first wife and his arrival, together with that of Walter Langley has been said to the graduation of Newlyn from a colony to a School. He was a prominent part of the art scene there, and one of the few artists to set up home as a family, having married relatively young. Many visitors enjoyed his civilized hospitality. From 1884-87 the family lived in Cliff Castle Cottage. Harris’ wife was the niece of an influential art dealer from Birmingham and thus he enjoyed a good outlet for his work. Edwin and his wife had a son, born in 1884 and baptised at St. Peters, Newlyn on 24th June 1885. Tragically, his young wife died only three years later after a grueling period of illness which upset all who knew her and left Edwin distraught. Elizabeth Armstrong was one of those who nursed her and whilst at Cliff Castle she first made the acquaintance of Stanhope Forbes, whom she later married.

After his wife's death Harris moved with his son and a nurse to Belle Vue House, Newlyn where Elizabeth and her mother also lodged. Forbes was also to join them there after Elizabeth and Stanhope were married.

In 1895 Harris left Newlyn finally, and met his second wife, Sally Cornwell, a Penzance girl and mutual friend of Walter Langley, in Plymouth. They spent the following three years, in Cardiff, Newport and Bristol where Harris concentrated on portraiture. Sally's close friend, Ethel Pengelly, left in Penzance after their marriage, became the second wife to Walter Langley, who was widowed at forty-three.

In 1898 Harris returned to Birmingham where he continued to paint portraits. He died, age 50, on 5 January 1906 in Cleeve Prior, near Evesham, Worcestershire.

Harris’ work exudes a quiet domesticity; his mood is light and gentle, sentimental even. He painted domestic scenes of great charm, based on careful observation. His work typically portrays pleasure in simple family relationships, and children at play.

This original watercolour painting depicts a young girl, perhaps aged around six to ten years old, picking white spring blossom from a small tree. She is wearing a blue bonnet tied under her chin with a pink bow, a white pinafore over a cream or yellow dress and black boots. She is in a meadow, with grass and wild flowers underfoot. There are branches of blossom in the foreground and other hedgerow in the background. The sky is pale blue, and it is obviously early spring. It is a rather charming and uplifting scene.