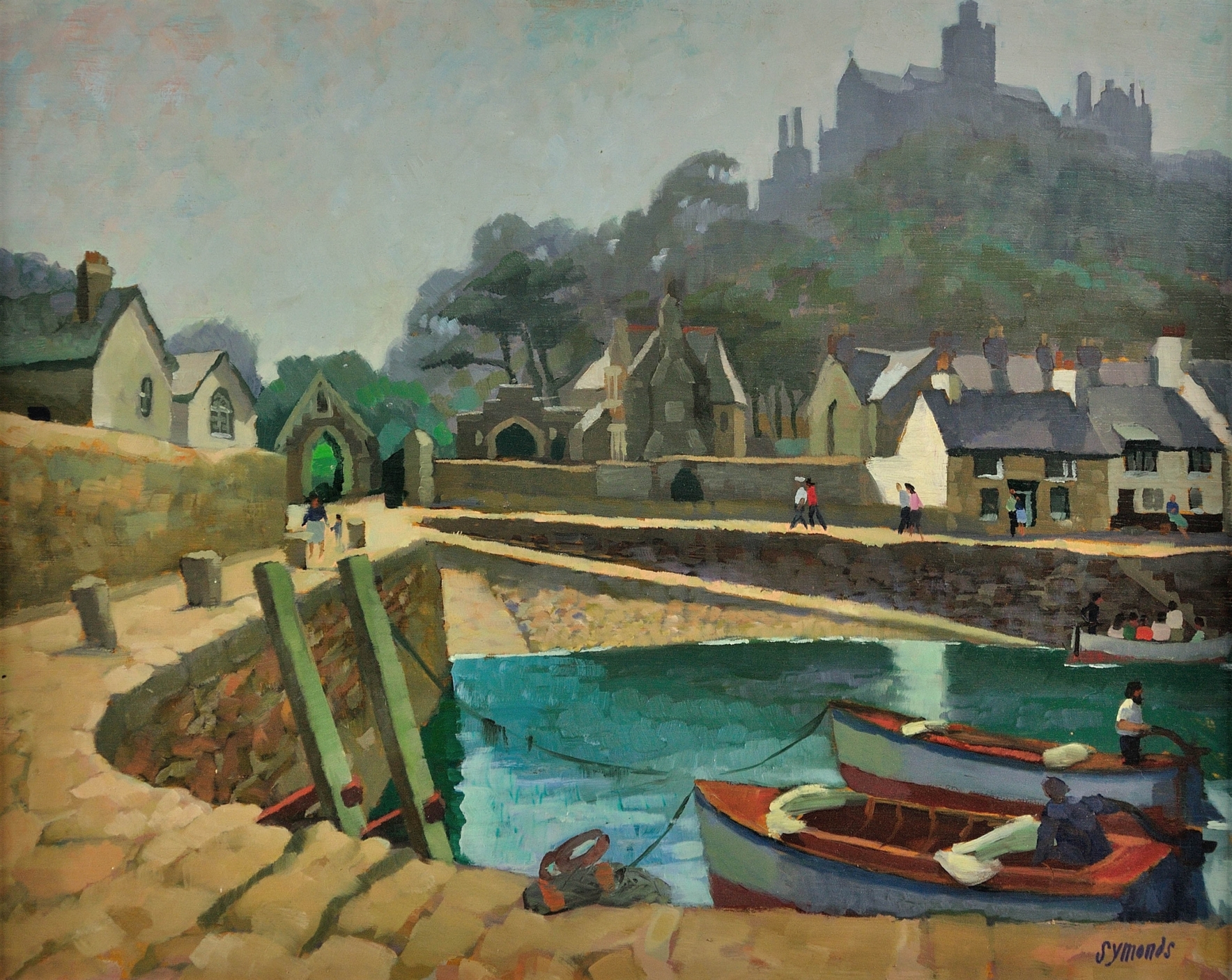 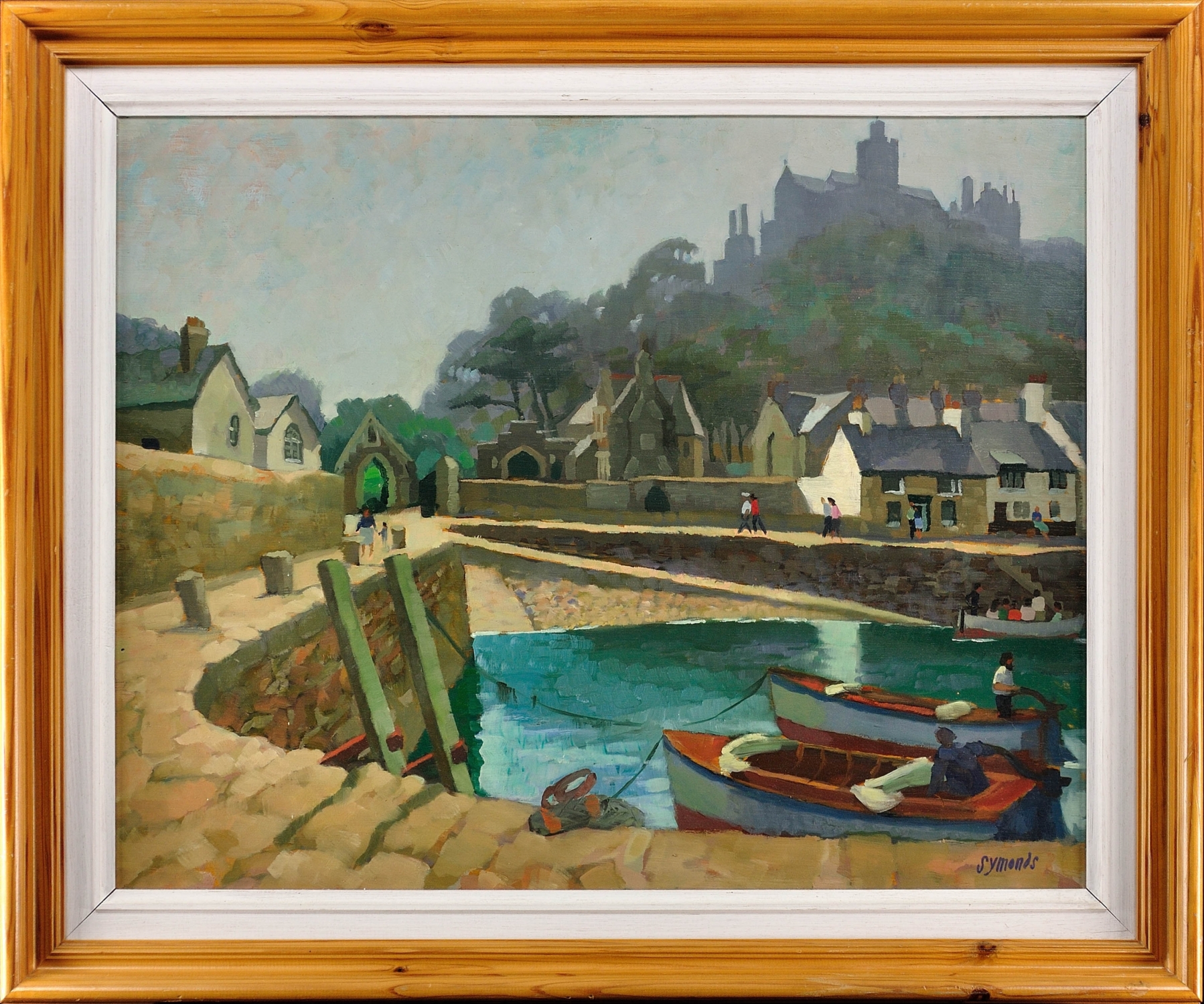 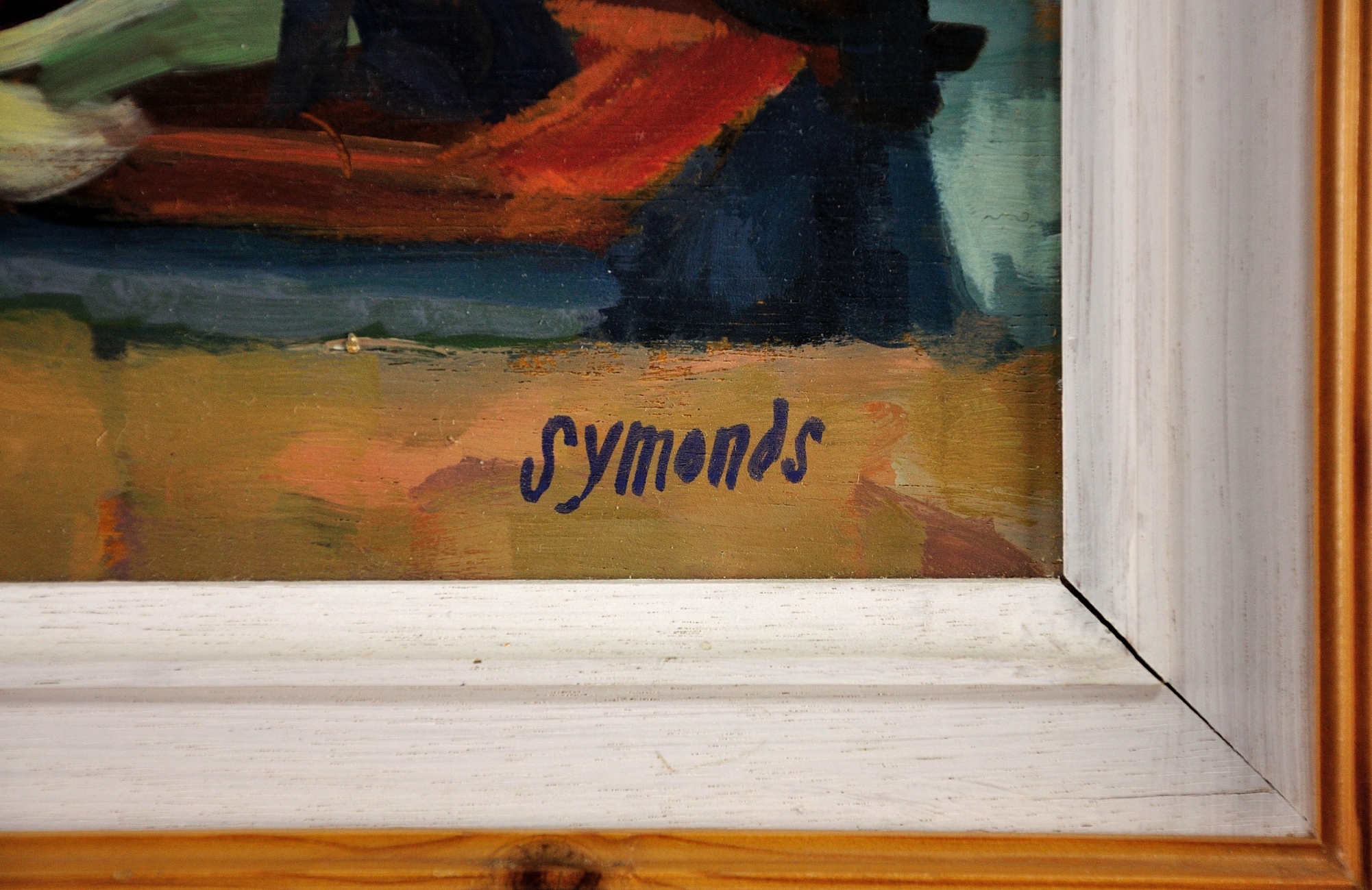 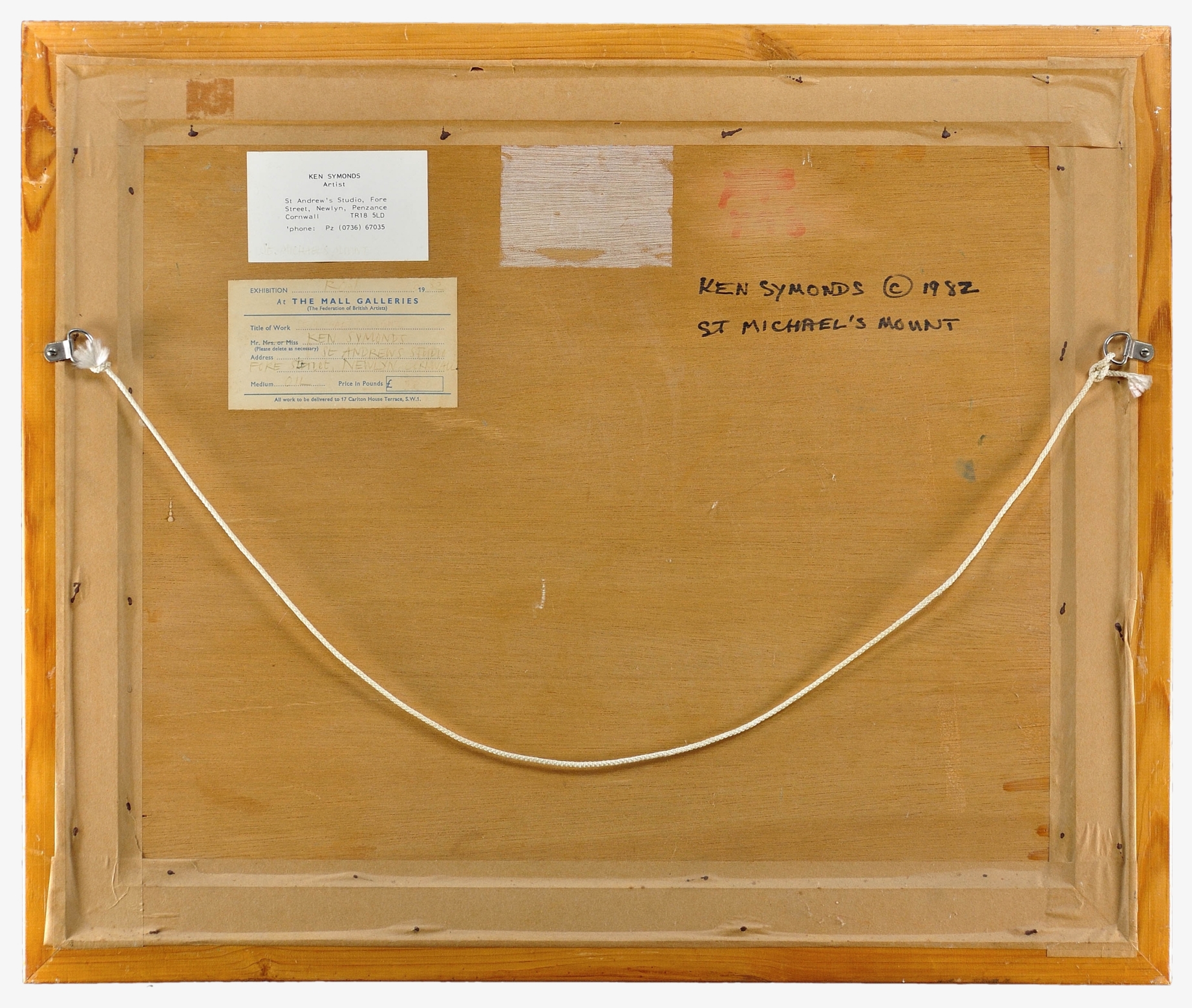 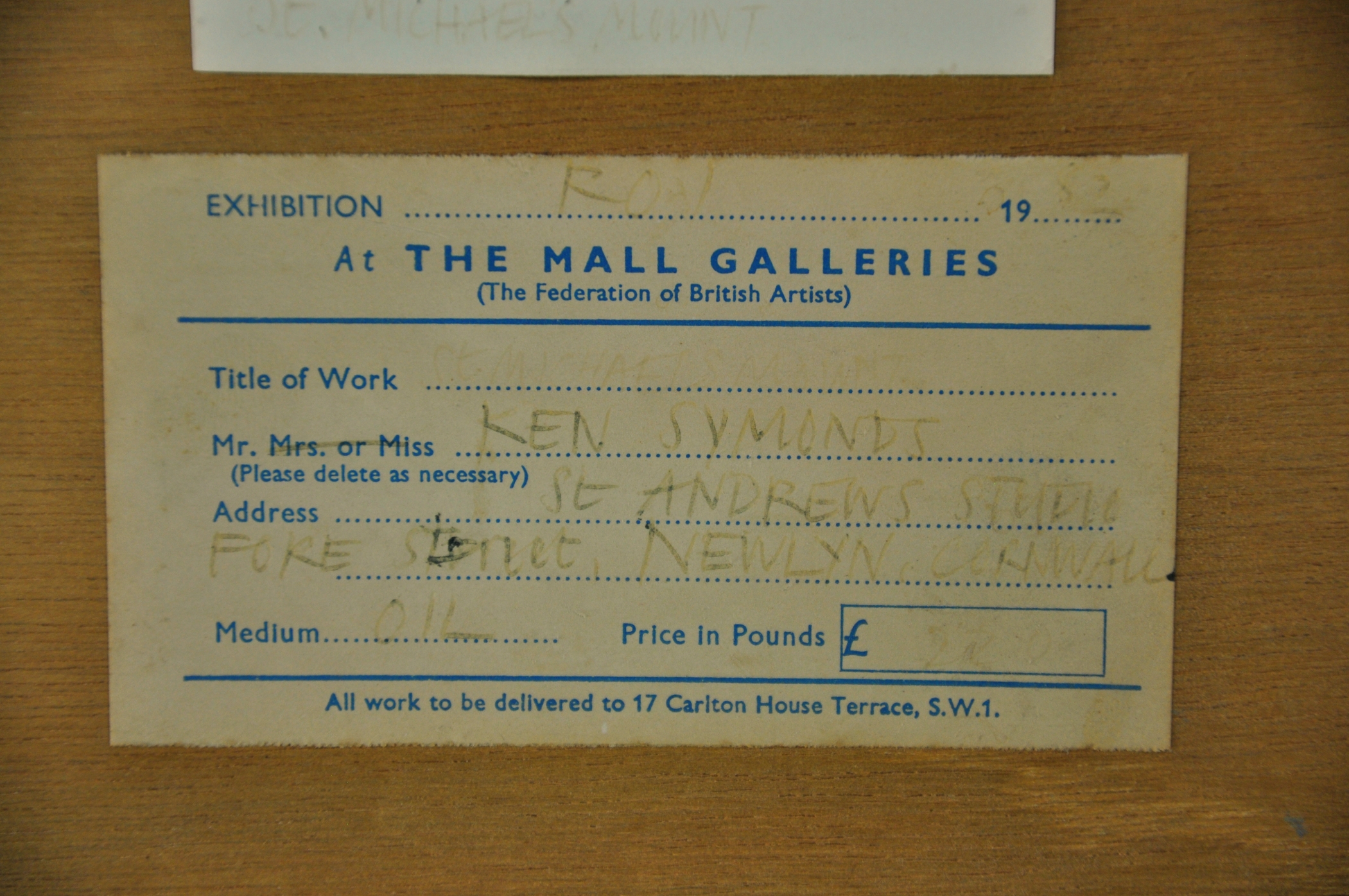 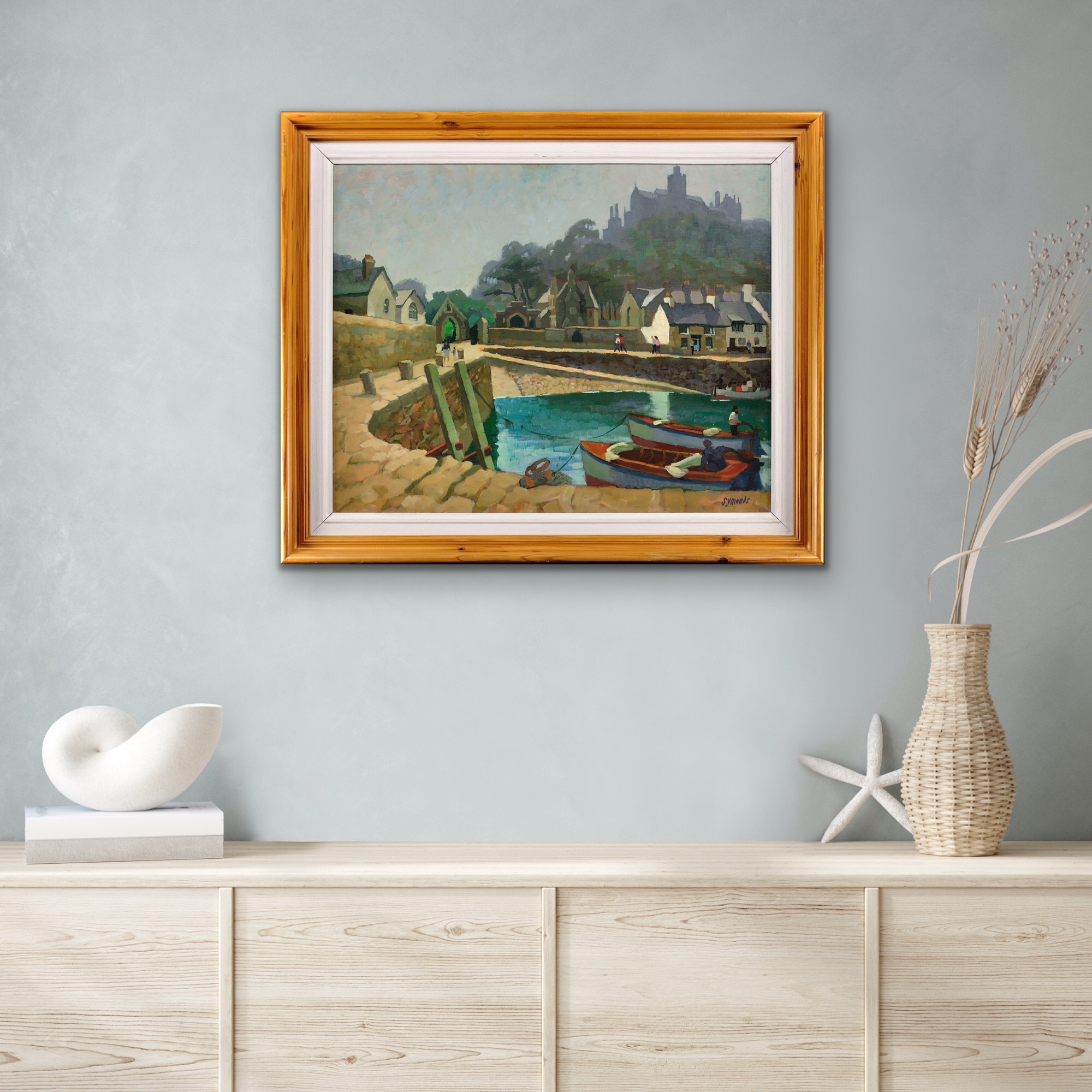 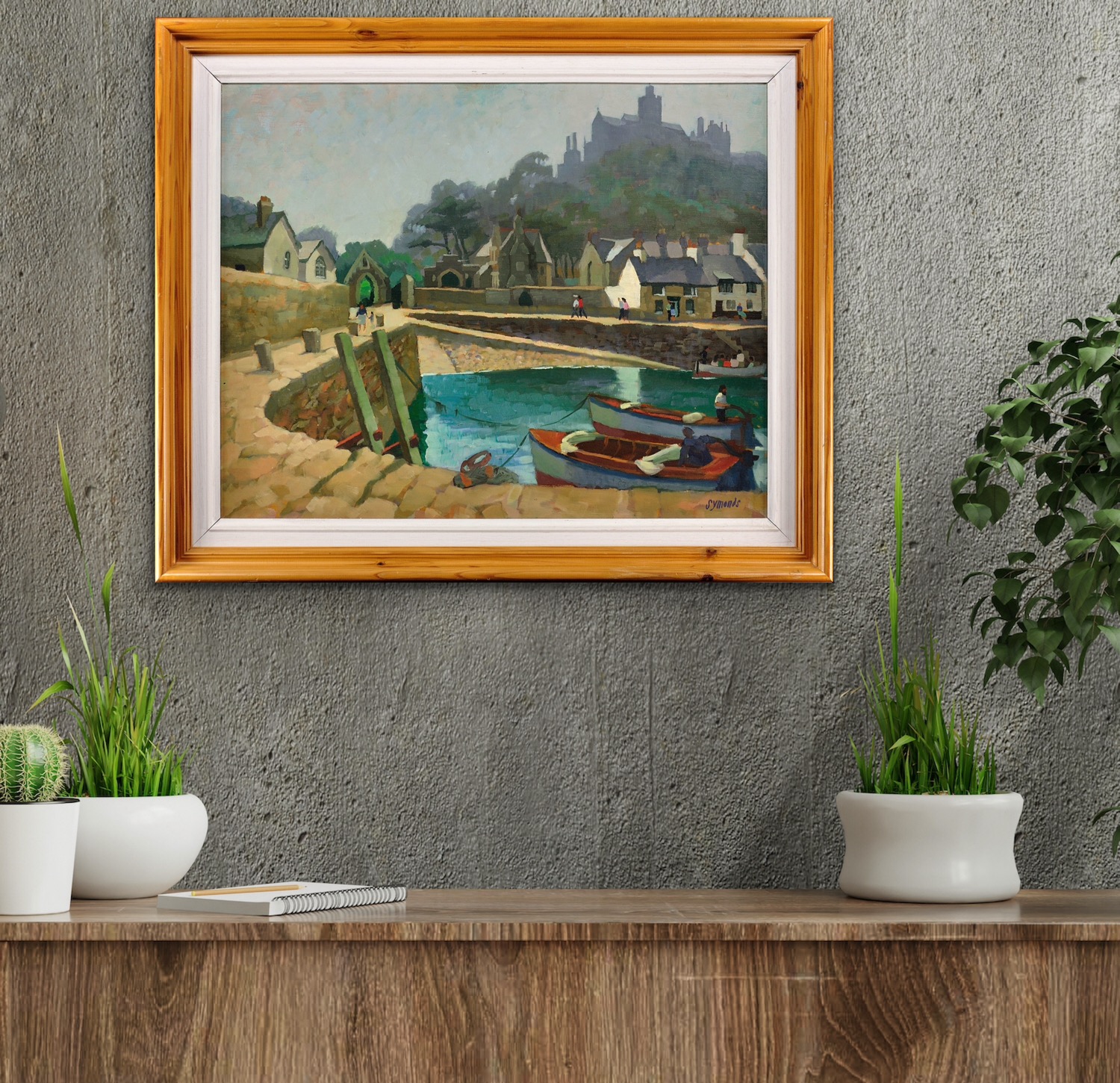 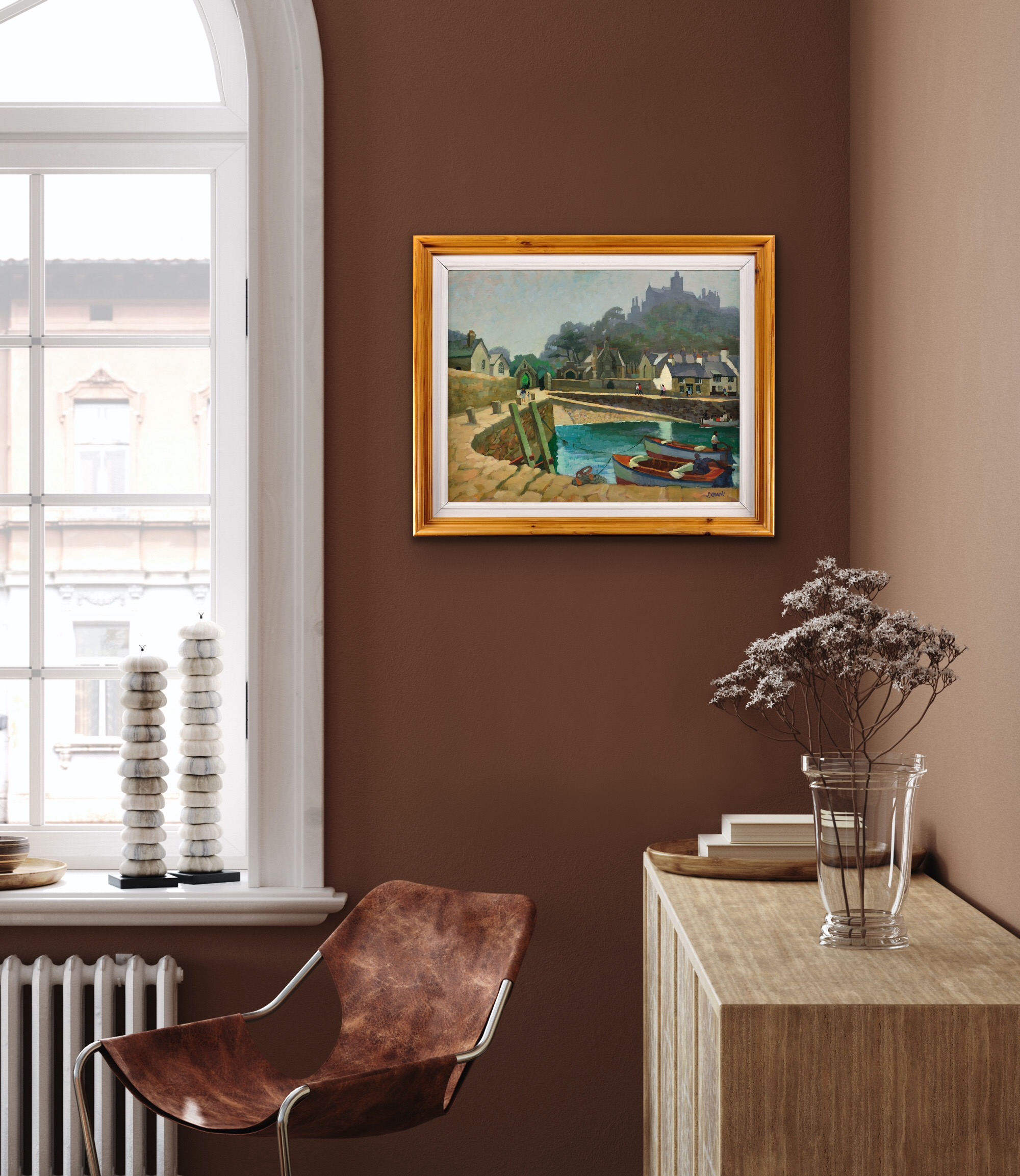 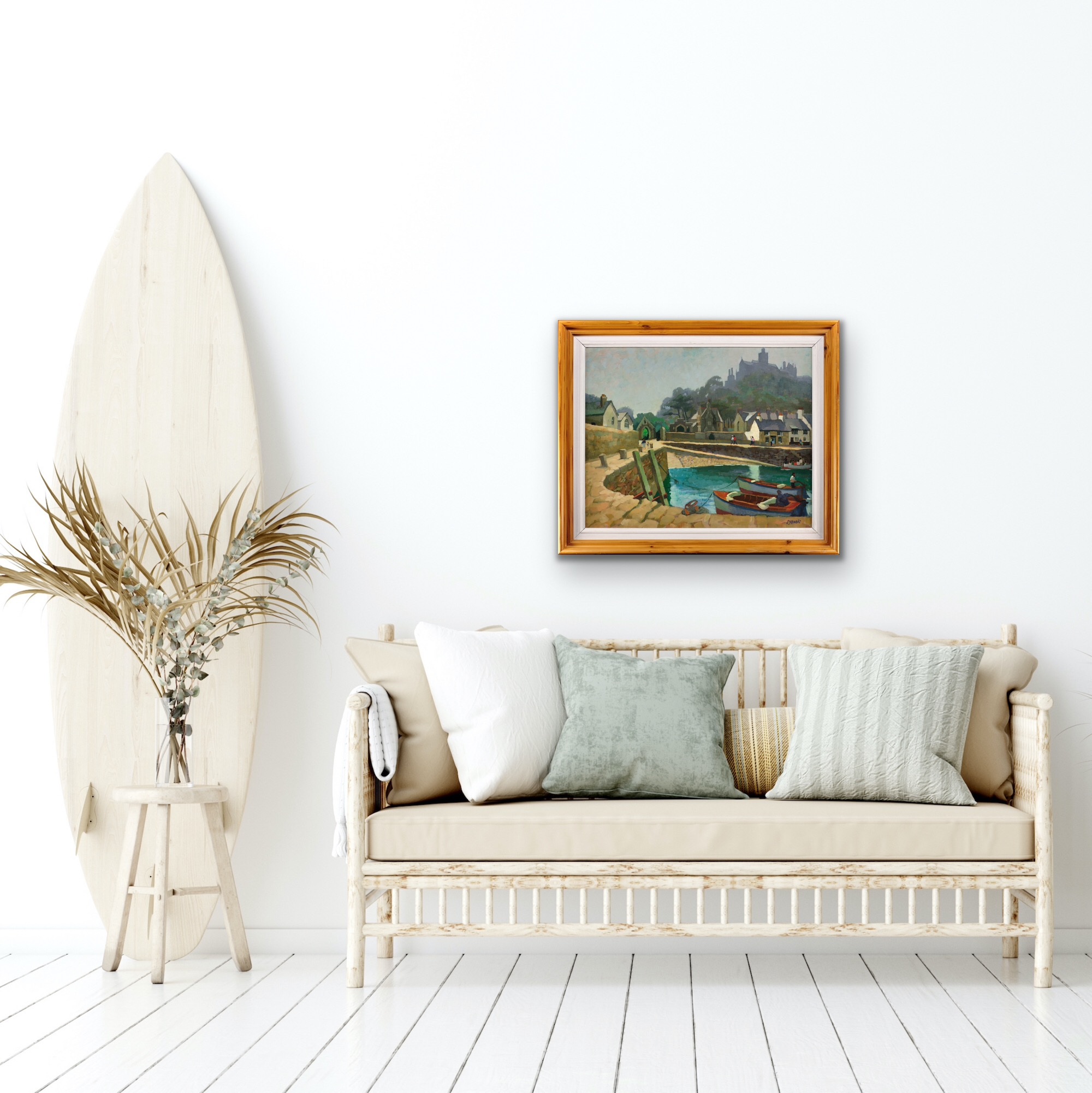 Available for sale from Big Sky Fine Art; this original oil painting by Ken Symonds dating from 1982.
The painting is presented and supplied in its original wooden frame and mount (which is shown in these photographs).
This vintage painting is in very good condition, commensurate with its age. It wants for nothing and is supplied ready to hang and display.
The painting is signed lower right.
A label on the reverse shows the piece was exhibited at The Mall Galleries in August 1982 and the other label is the that of the artist’s studio address in Fore Street, Newlyn TR18 5LD.

Ken Symonds was a highly respected and accomplished artist, who spent the later part of his life living and painting in Cornwall. He is well known for his nudes and interiors, but also for portraits and landscapes. He painted and exhibited across the UK, Europe, America, Africa and Asia. His work is widely held in both public and private collections internationally.

Ken was born in Swindon, Wiltshire and worked for some years for the Great Western Railway based at Swindon before the Borough of Swindon awarded him their first grant to attend art school. He then moved to London where he studied art at Regent Street Polytechnic School. Here, he met his wife, Jane, who later became a formidable force at the Newlyn Art Gallery. Ken initially made a living as a freelance artist as an illustrator and designer of book jackets. He travelled extensively, and worked for a publisher in Africa. Ken also studied for his teaching diploma at London University and then taught for two years in Barnet, Herts.

In 1960 Ken and Jane Symonds moved to West Cornwall, where they became an integral part of the artistic community. Ken joined both the Penwith Society and the Newlyn Society of Artists and often exhibited with them both. He was the Chairman of the Newlyn Art Society for the five-year period when it combined with the Penzance Gallery, Orion, to effect a stronger financial base. Ken taught at the Penzance School of Art, the St Ives School of Painting and took private lessons in his own studio too.

In 1980 Ken and Jane moved into a large old church in Newlyn, which they converted into a marvellous living and working space. This had panoramic views over the bay towards St Michael’s Mount. The landscape of West Cornwall in which Ken lived provides a central theme to much of his work, including many coastal scenes, lighthouses, cliffs, moors, hamlets and disused tin mines. One of his paintings was presented to Prime Minister Margaret Thatcher for the No 10 Downing Street art collection, in commemoration of the gift of Cape Cornwall to the National Trust.

Over the years Ken painted less in oils and most of his later works are in watercolour or pastels. In 1990 he was invited to become a member of the Pastel Society. His work has shown on the continent and in America as well as throughout the UK and was included in the 1992 RWA show Artists from Cornwall.

This original oil painting on artist’s board, dated 1982, depicts the harbour of St. Michael’s Mount, Marazion, Cornwall, which was once a flourishing seaport. St. Michael’s Mount as seen from the shore of the mainland is one of the most popular subjects for British artists, but this scene captures the harbour area of the Mount in a more intimate way. This piece showcases the use of light and tonality that define Ken Symonds’ innate style. The colours are bright and clear and there is a mellowness about the piece. The vantage point is from low down on the curve of the harbour wall, from where we see three small wooden boats, floating on calm turquoise blue waters. There is a single figure in the two nearest boats and a handful of pedestrians on the harbour walls. On the opposite side of the harbour there is a cluster of modest dwellings, still inhabited, although the resident population on the island has reduced from its peak of just over 200 people in the 1800s to around 30 nowadays. High on the rocks towering above the village we see the outline of the ancient castle, silhouetted against the pale blue sky. This is a charming view of the island, which takes us directly into the heart of this fascinating and historically significant place.

St Michael’s Mount is a tidal island of 17 acres in Mount’s Bay, Cornwall. The island is a civil parish for governance purposes and is linked to the town of Marazion by a causeway which is passable on foot between mid-tide and low-water. Today the island is owned and managed by the National Trust in conjunction with the St Aubyn family, who have had their home in the castle there since approximately 1650.

St Michael’s Mount is thought to have been the site of a monastery from the early 8th to early 11th centuries. It was gifted to the Benedictine order of Mont Saint Michel by Edward the Confessor but was later reduced to being a secular chapel. For many years it was a destination for pilgrims. The earliest buildings still on the summit date back to the 12th century.

Historically, St Michael’s Mount is the Cornish counterpart of Mont-Saint-Michel on the Normandy coast, which is somewhat larger but shares the same conical shape and tidal island characteristics. 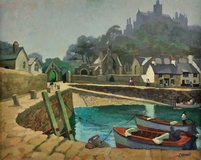