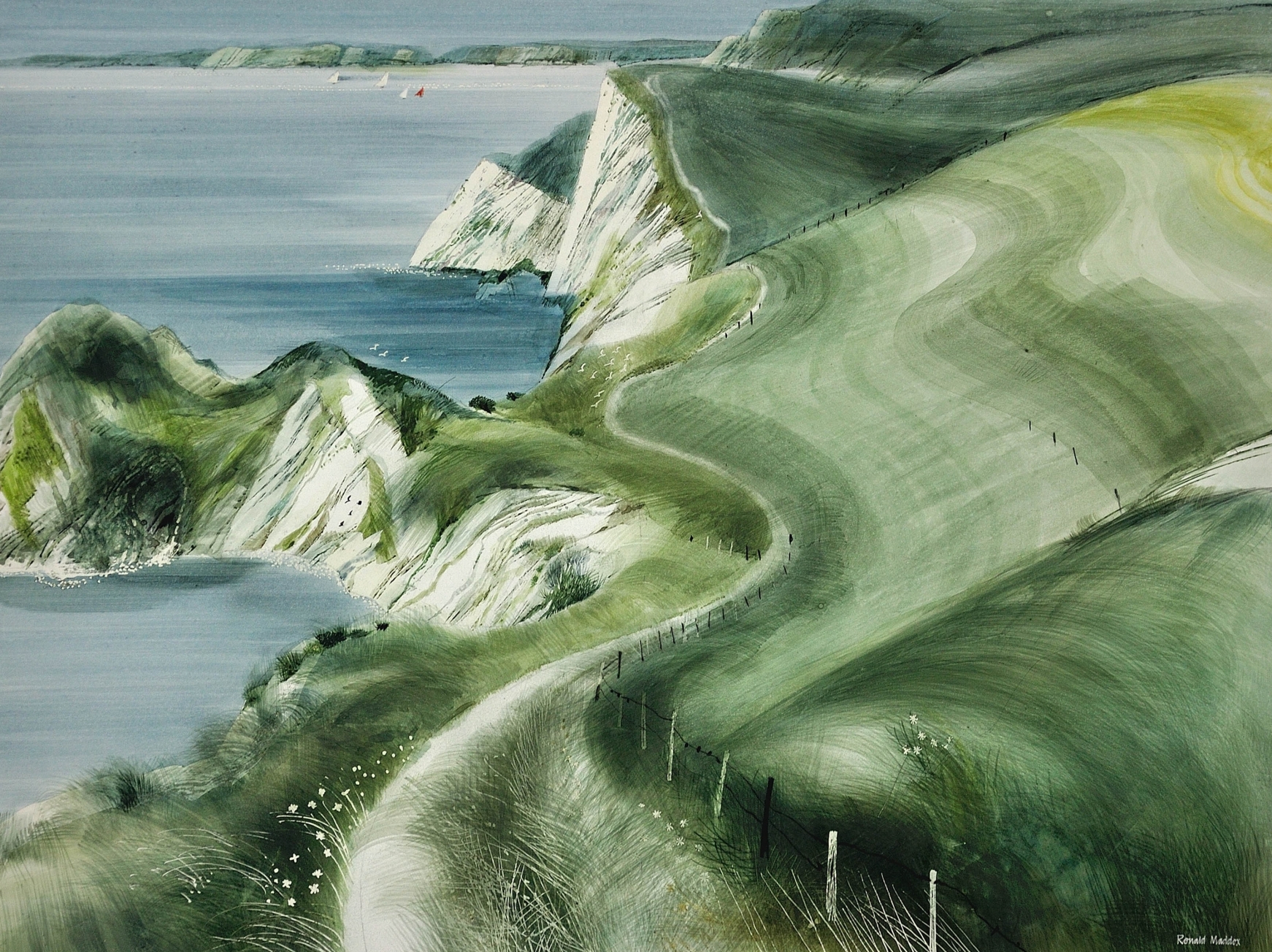 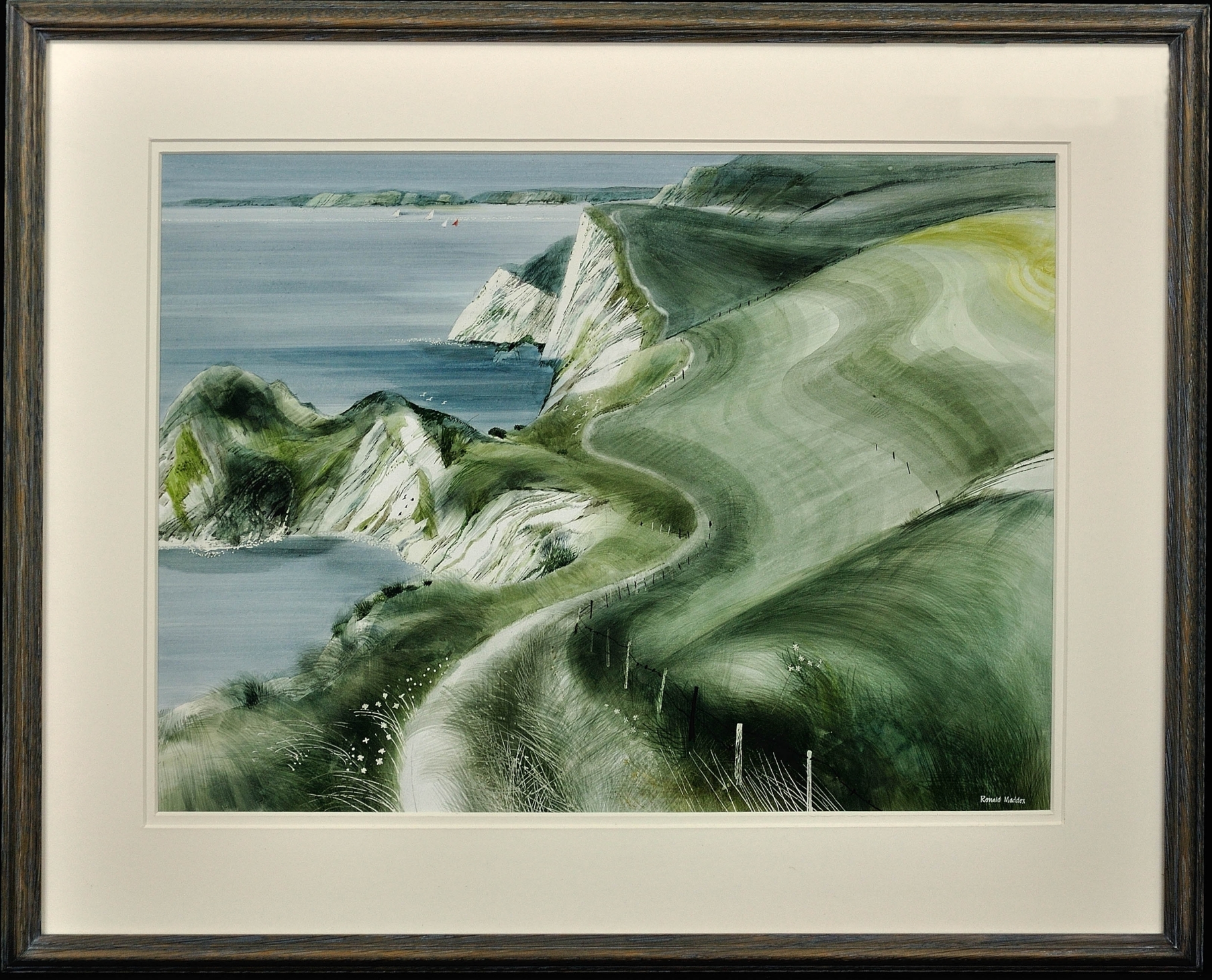 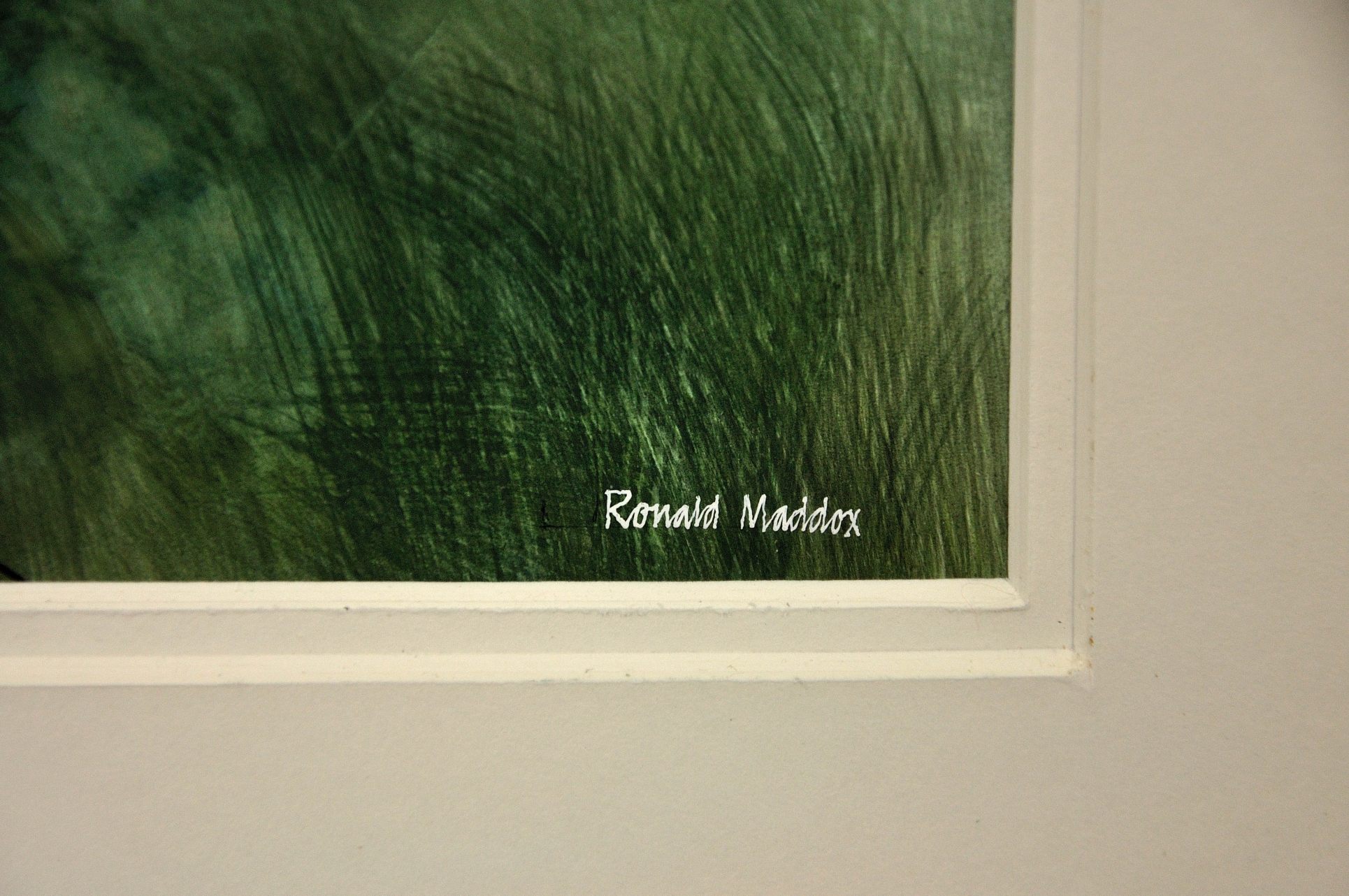 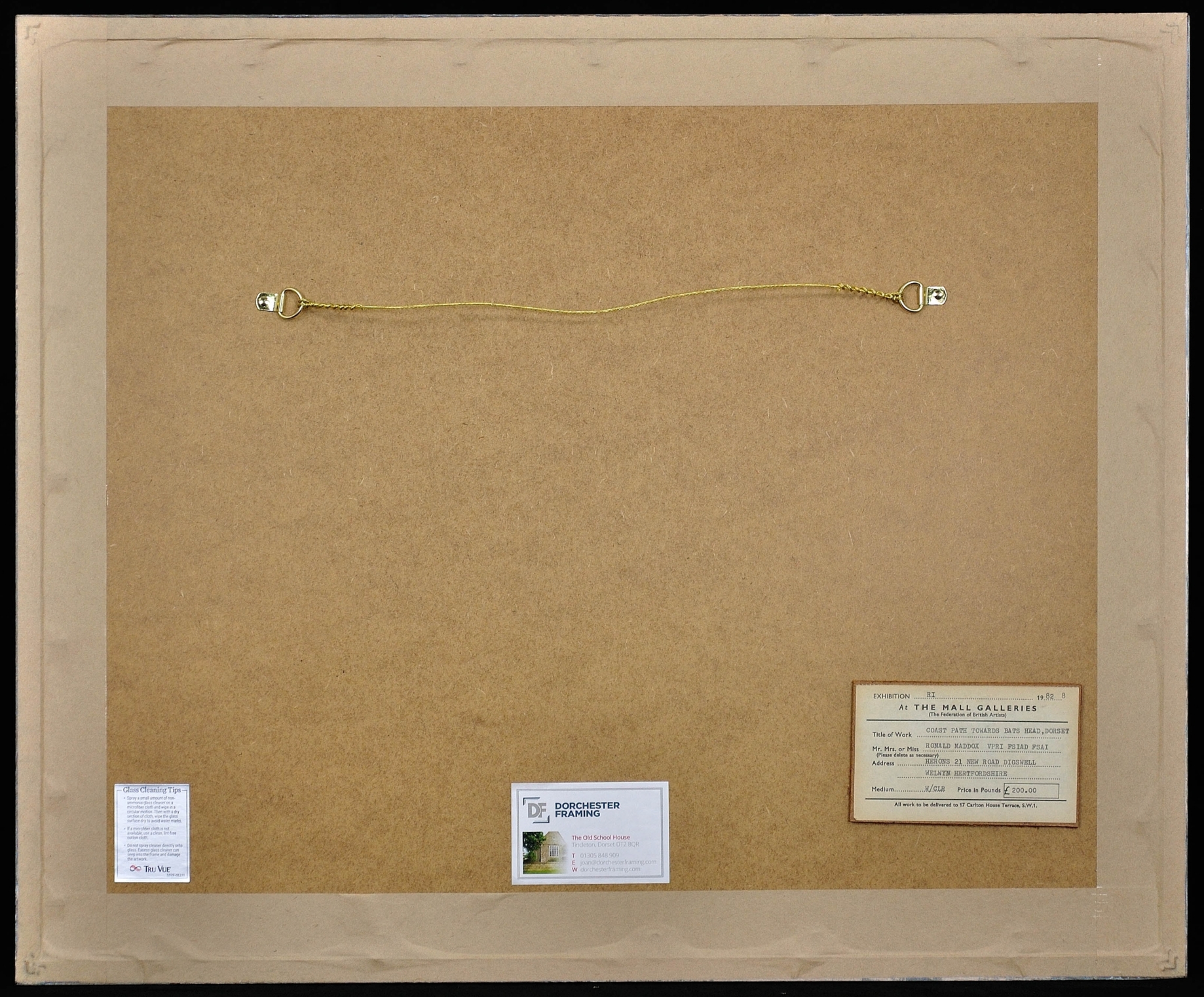 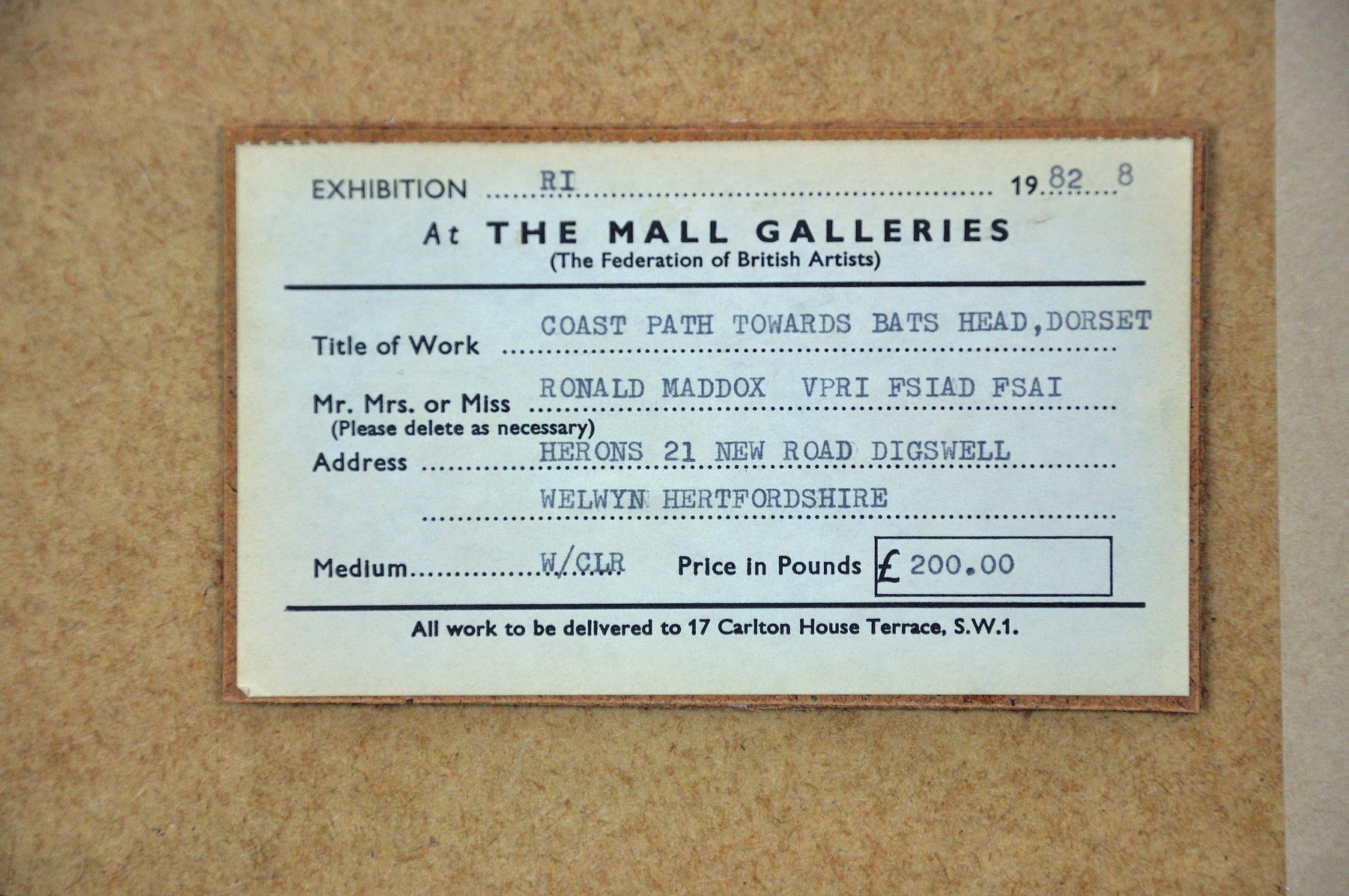 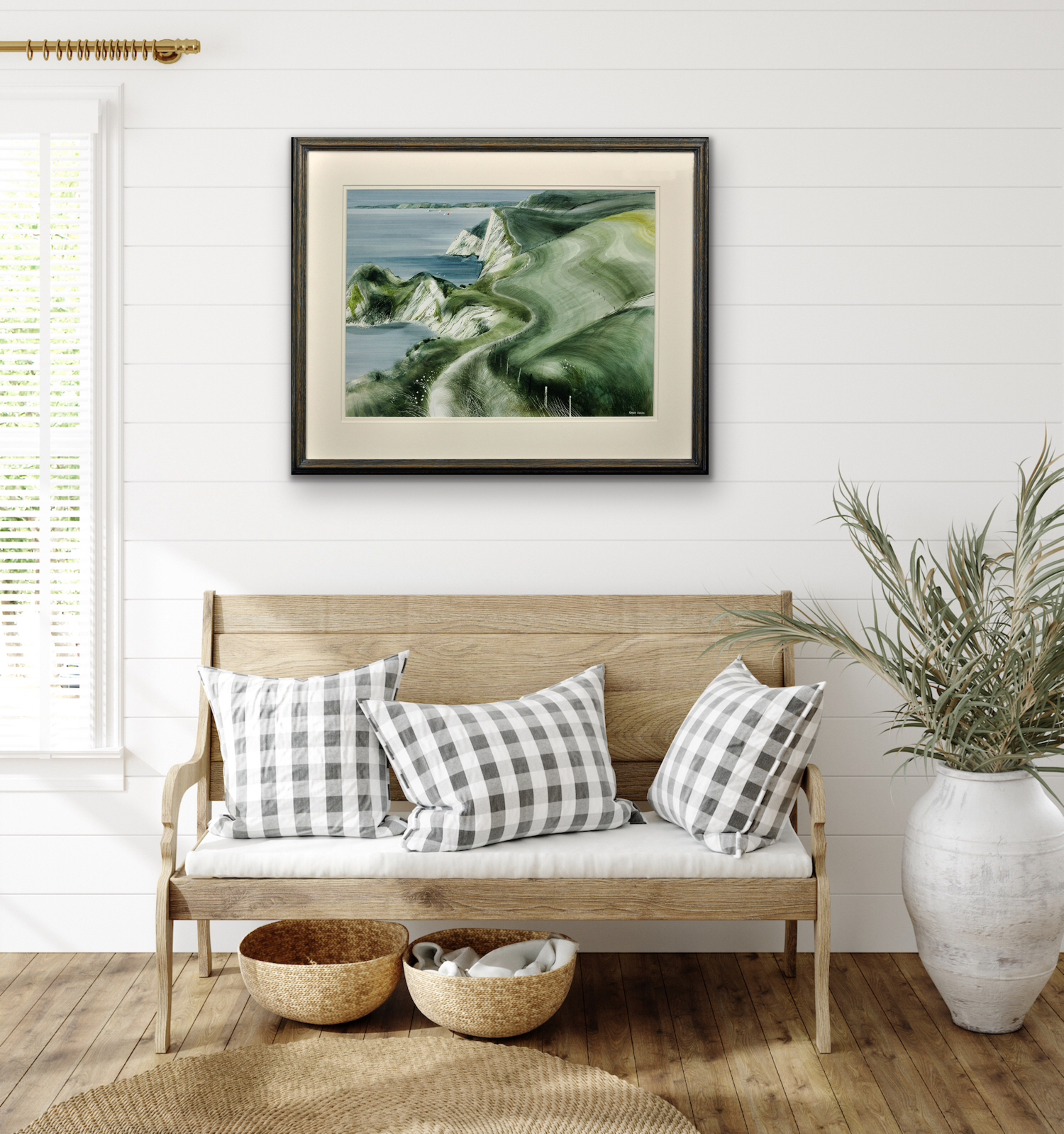 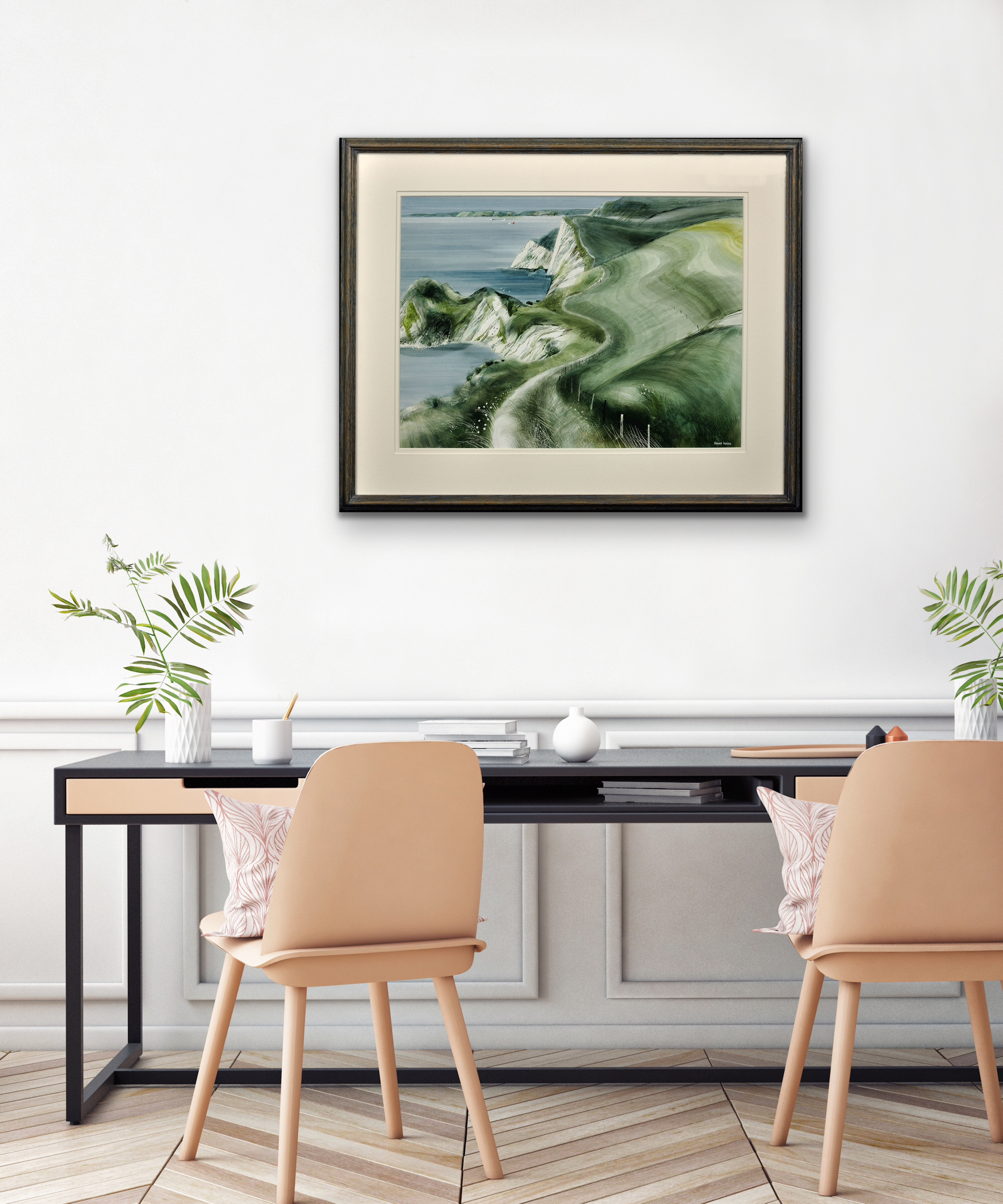 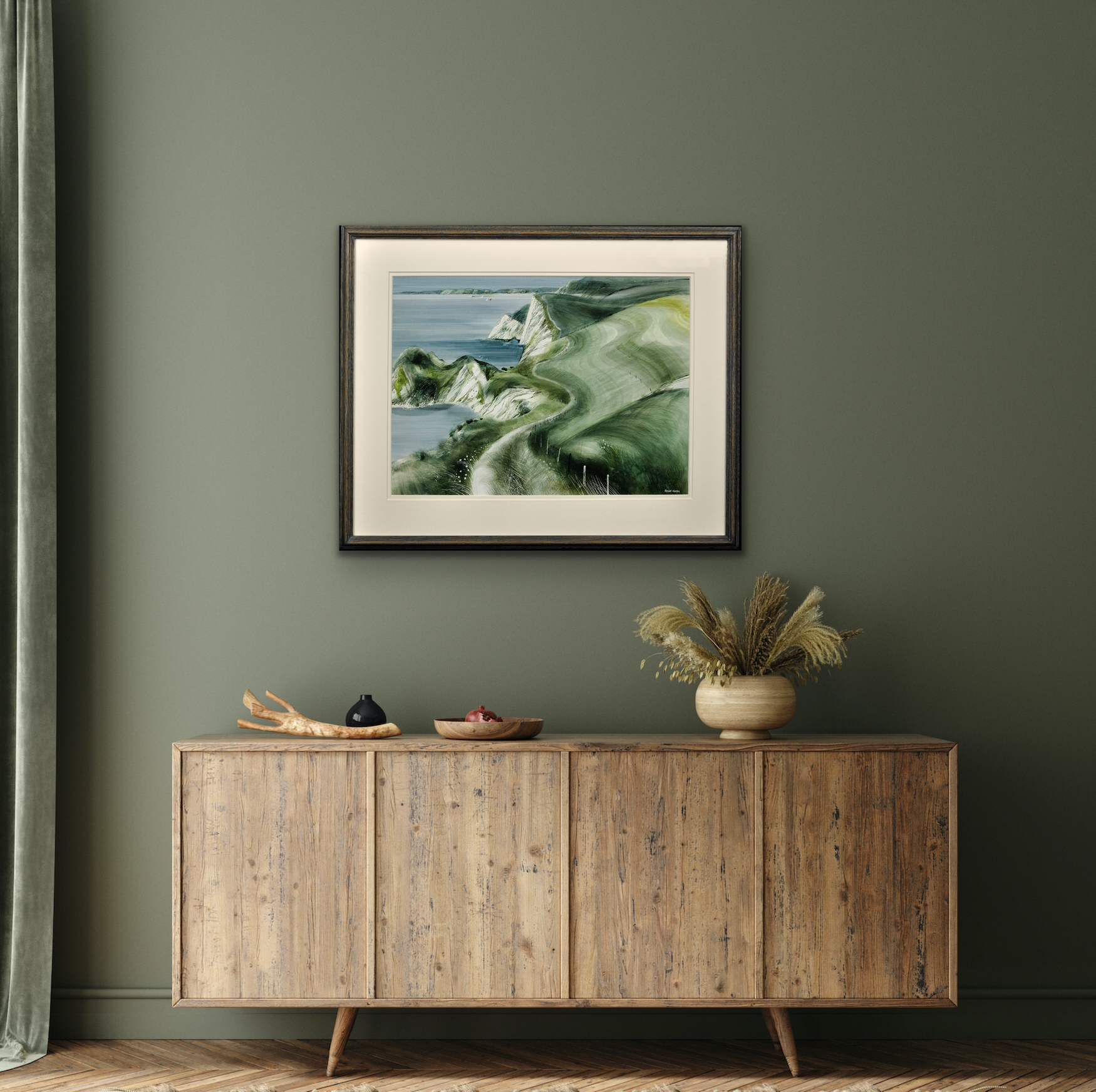 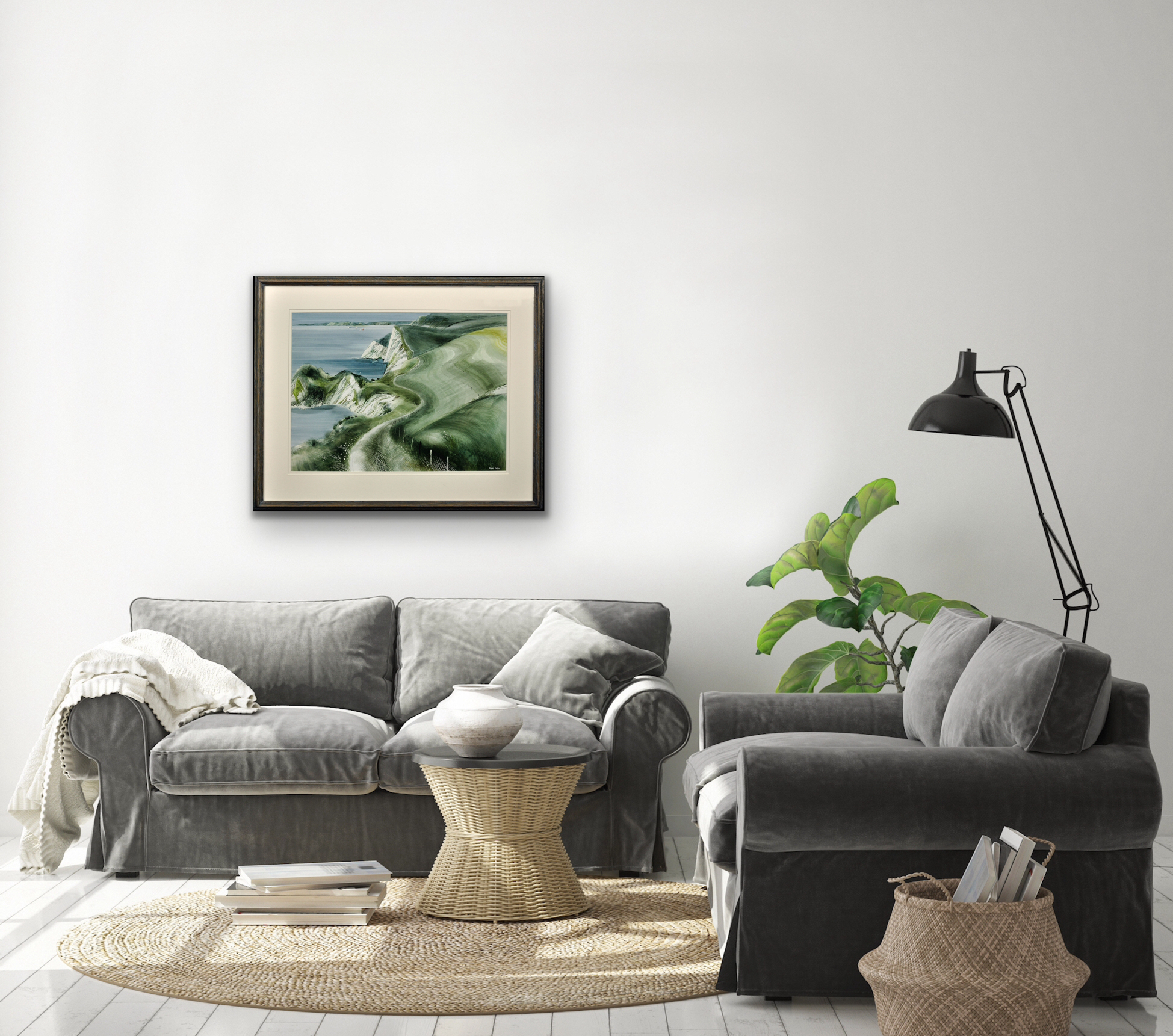 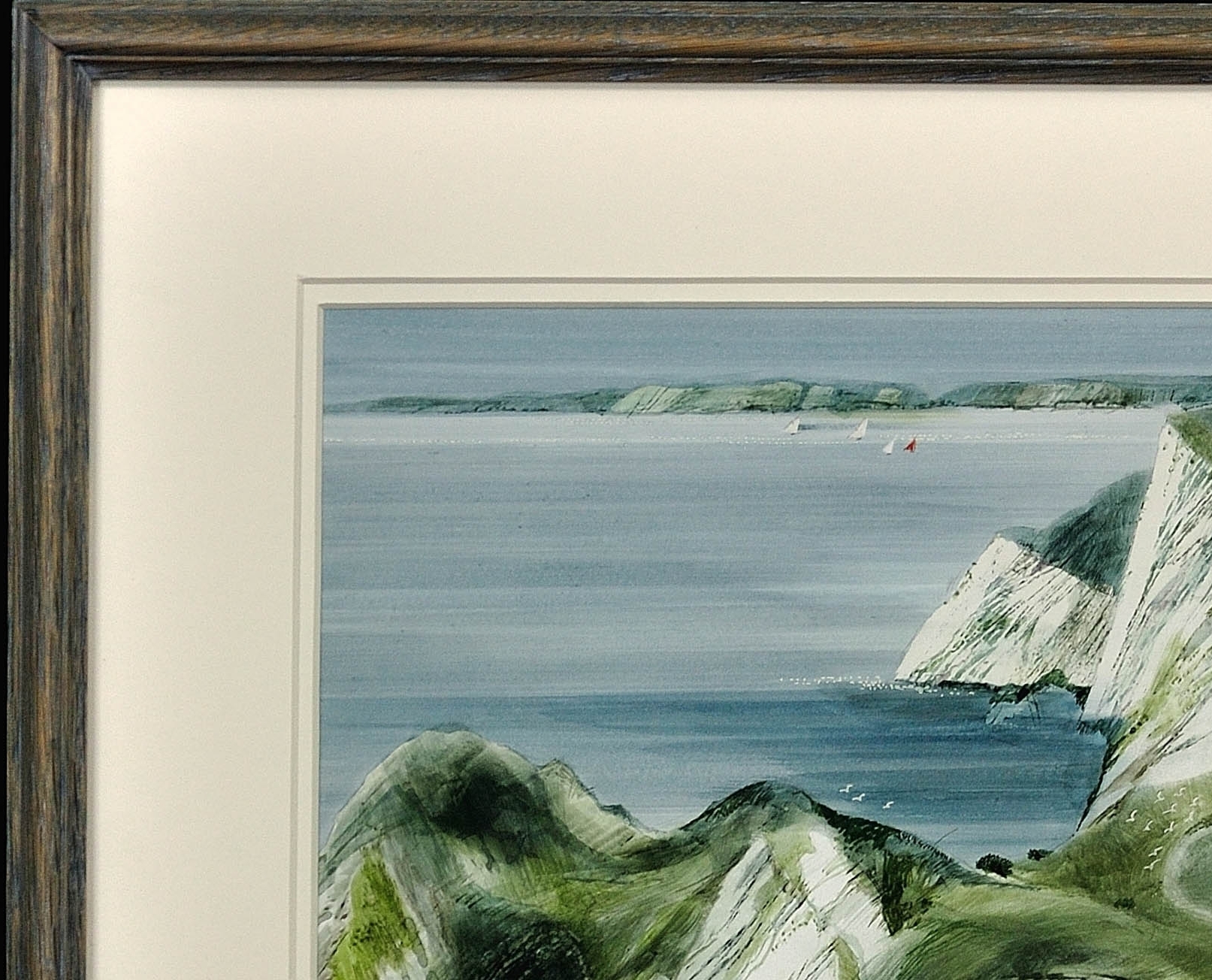 Available for sale from Big Sky Fine Art; this original painting by Ronald Maddox dates from 1982.
The watercolour is presented and supplied in a sympathetic and contrasting contemporary frame to suit the subject colouration (which is shown in these photographs) and behind non-reflective Tru Vue UltraVue® UV70 glass.
This vintage piece is in superb condition. It wants for nothing and is supplied ready to hang and display.
The watercolour is signed lower right.

Provenance: The painting was exhibited at the Royal Institute of Painters in Water Colours at The Mall Galleries at 17 Carlton Terrace, SW.1 , London in August 1982. The exhibition label from the previous backboard of the painting has been retained and affixed to the rear of the new backboard.

Ronald Maddox was an accomplished and successful British artist, designer and illustrator.

He was born in Purley, Surrey and studied at St. Alban School of Art from 1945 to 1948. He then served with the Air Ministry Design Service, during which time he attended Regent Street Polytechnic in London from 1949-51, before completing his studies at the London College of Printing. His tutors included Henry Trevick, Raymond Sheppard, and Christopher Saunders.

From 1953 to 1962 Maddox worked as an art director for advertising agencies in London. He then worked as a freelance artist illustrator and graphic designer. Between 1972 and 1989 Maddox worked extensively for the Post Office and the Royal Mail, and the Isle of Man postal authority. He designed stamps, stamp book covers, first day presentation packs, posters and charts. His stamps typically feature British architecture, rural life and the countryside. He also produced posters for British Rail and painted pictures that were used as carriage panel prints, and illustrated several books.

Maddox received many awards for his work as an artist and designer, including the Winsor & Newton /RI 150th Anniversary Award in 1981 and the Members’ Award in 1991. He was a Hunting Group Finalist several times and won the Design Council Award in 1973 and the Rowland Hilder Award for the Most Outstanding Landscape in 1990.

Maddox excelled at architectural work, reproducing the textures and patterns of buildings, but he is perhaps best known for his topographical art works, which explore the shapes and design of landforms. He loved nothing more than to walk in the countryside and capture its beauty. He wrote, “over many years I have been fascinated by the pattern and form of the landscape in Britain, the result of its geological formation and centuries of weathering.” He liked to carry a minimum of equipment with him in a rucksack, so that the distance he could cycle or walk was not inhibited. He would start his works by making a quick pencil sketch of the landscape, then increasing the size a little with a small watercolour painting. He would take this home and later work on the image in his studio, increasing the size and palette again. He noted “There is nothing more satisfying that coming home with one or two spontaneous paintings, however small, that have captured the subtle colours of an English landscape”. He said that his work was influenced by the works of John Piper, Eric Ravilious, John Nash and Edward Burra (landscapes).

Maddox exhibited his original paintings in many mixed shows in London and regional galleries, including the Royal Academy, the Pastel Society, the Royal Society of British Arts and the Royal Watercolour Society. In 1992 Maddox shared a show at the 1992 Lichfield Festival with Sir Hugh Carons. Today, examples of his work are in the collections of the Fry Gallery and the Tate. His work is also held in many prestigious private collections, having been acquired by HM Queen Elizabeth the Queen Mother, the Sultanate of Oman, Barclays Banks, the BBC, British Rail and the Post Office.

Maddox lived with his wife in Digswell, Welwyn, Hertfordshire. He died on 4 November 2018 at the age of 88 and his obituary featured in the Times. In addition to being an outstanding artist he was remembered as being kind and charming and entertaining company. His work will live on in his original art, and in his stamps, which lie in their millions in albums around the world.

This original watercolour painting by Ronald Maddox is of the Jurassic Coastline in Dorset. It features the winding South West Coast Part, looking westwards towards Batshead. This section of the coast path is in the region of Durdle Door and Lulworth Cove. We see the white chalk cliffs and beautiful undulating coastline, forming rocky coves and bays. There are three seagulls flying in the mid-ground and a few small yachts in the distance. The sea and the sky are shades of blue and the land is grassy, in shades of green. Overall, this is both an interesting and mellow image.

For deliveries to EU countries, we will pay the VAT so you don't have to - prices are inclusive of EU VAT.
With respect to import customs duties for your EU country we will send the consignment using the appropriate Common Customs Tariff number 970110000 which provides the benefit of ZERO CUSTOMS DUTIES courtesy of the UK - EU Trade & Co-operation Agreement.

For deliveries outside of the UK and EU countries you will be liable for any import duties to the country of destination and any local sales taxes appropriate to the delivery address, if they are applicable - we will ship the consignment with the appropriate harmonized commodity code and with an accurate invoice. The appropriate Common Customs Tariff number is 970110000 if you need to check before purchasing. All duties and taxes, if any, will be collected by the courier or delivery company and they will charge a modest standard administration charge for performing this function on your behalf. 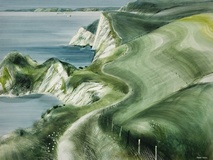