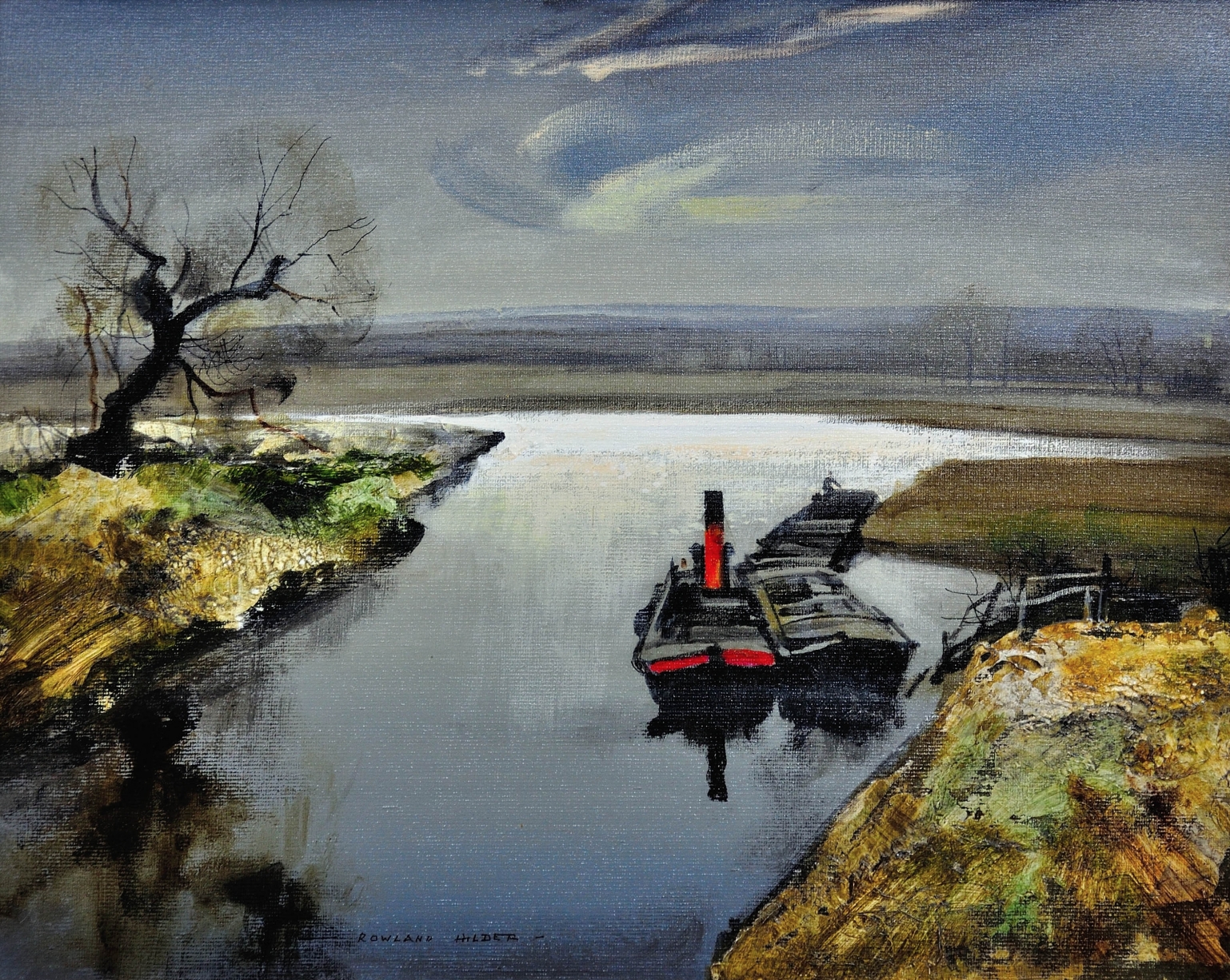 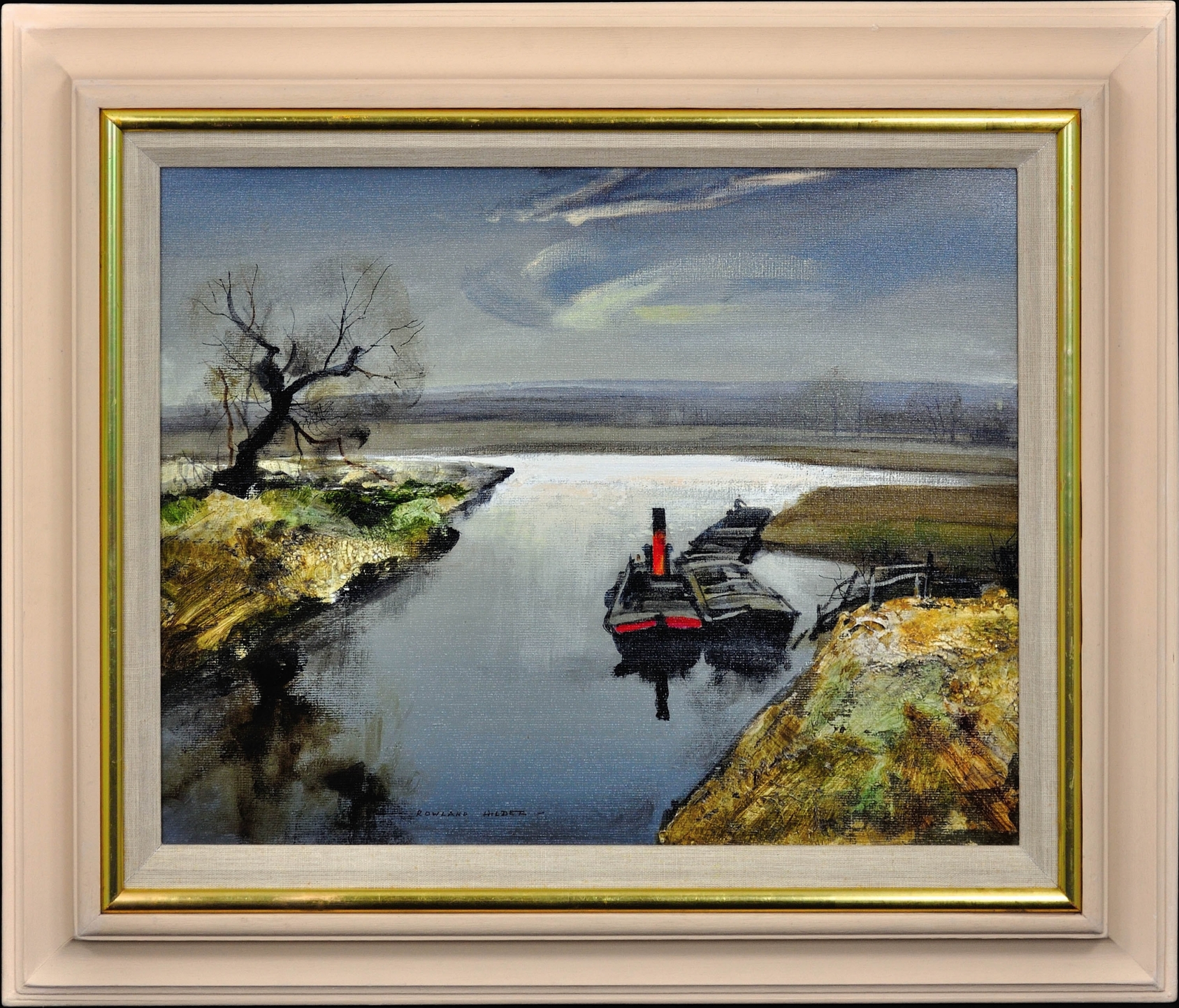 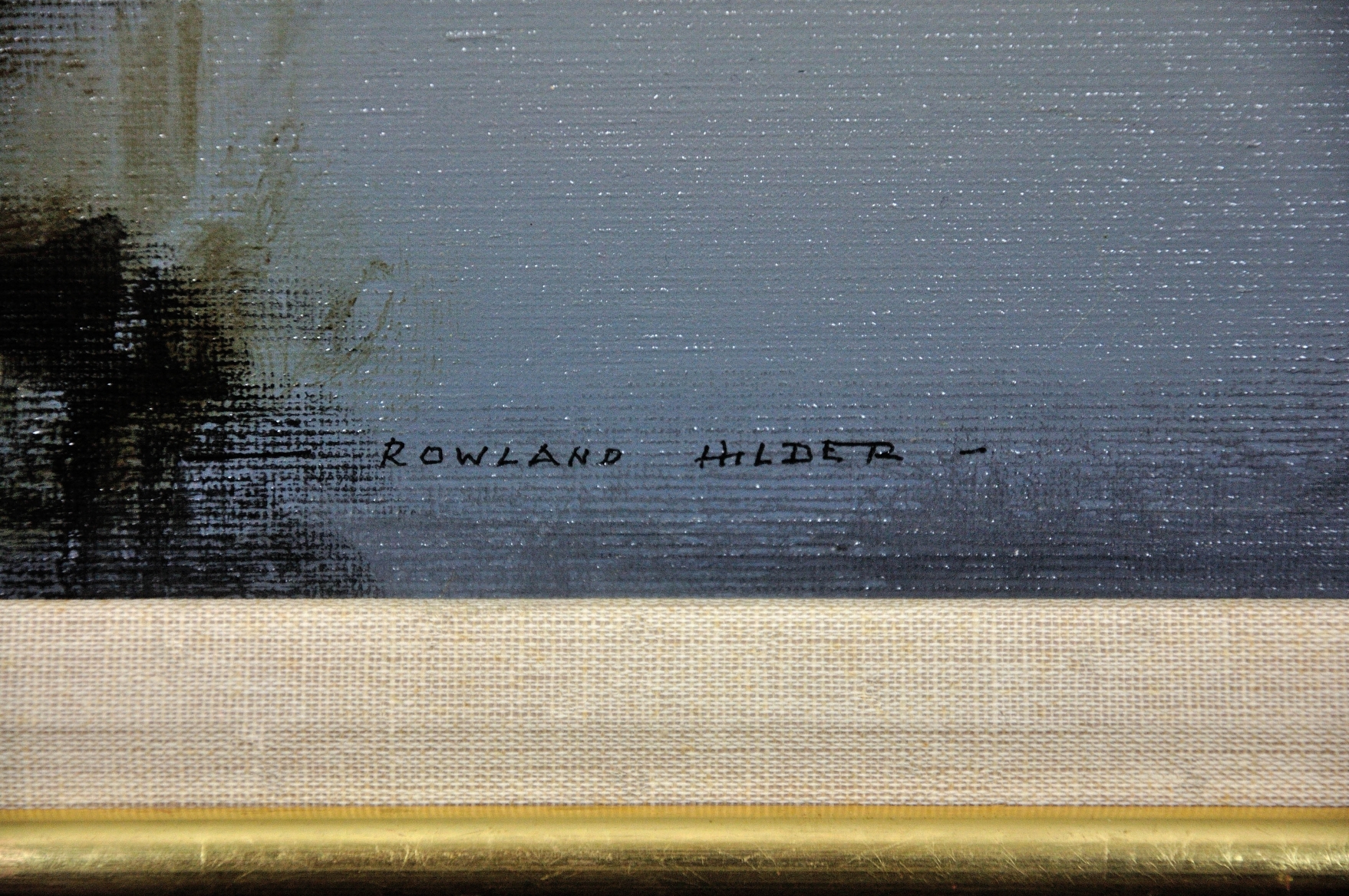 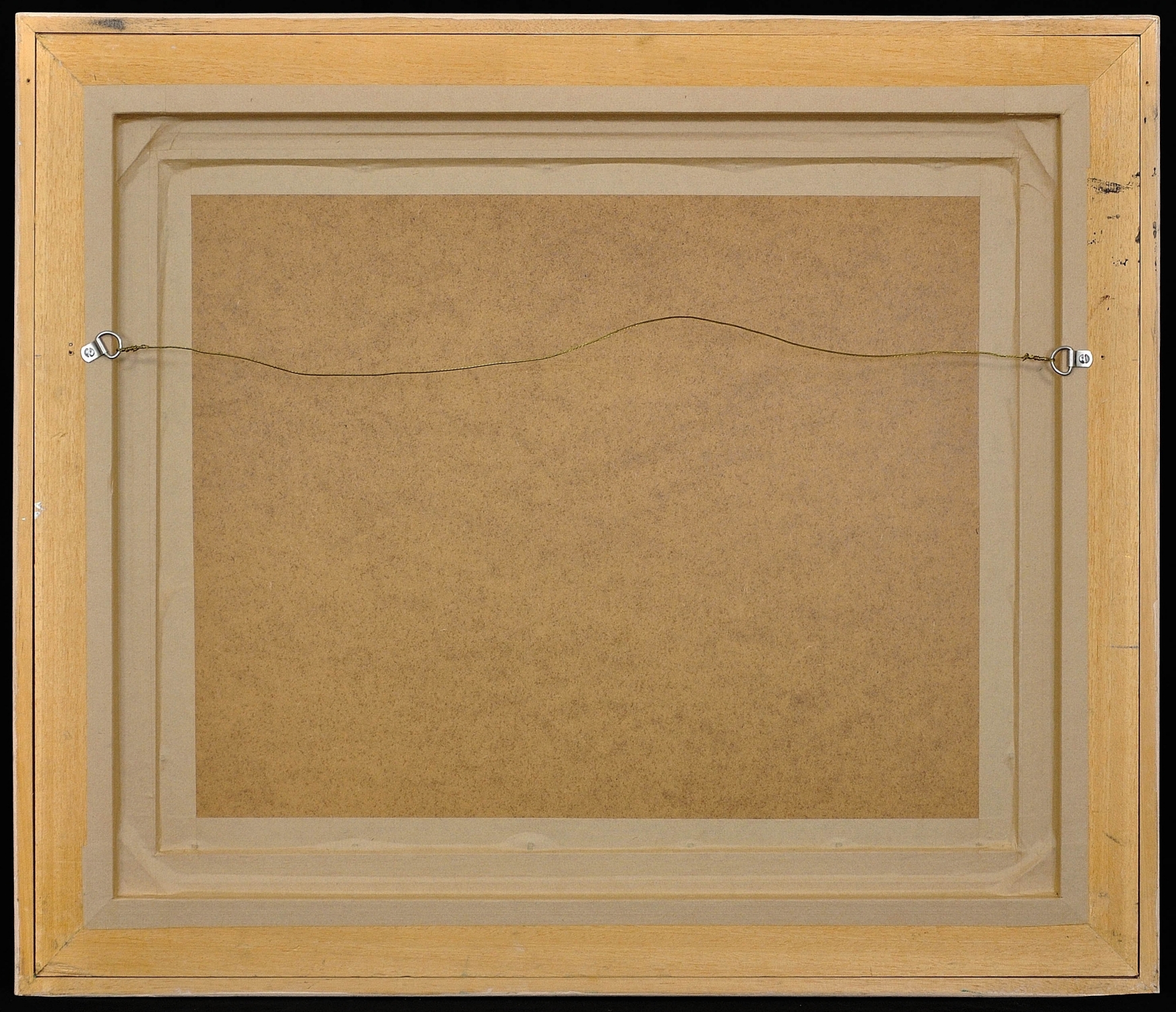 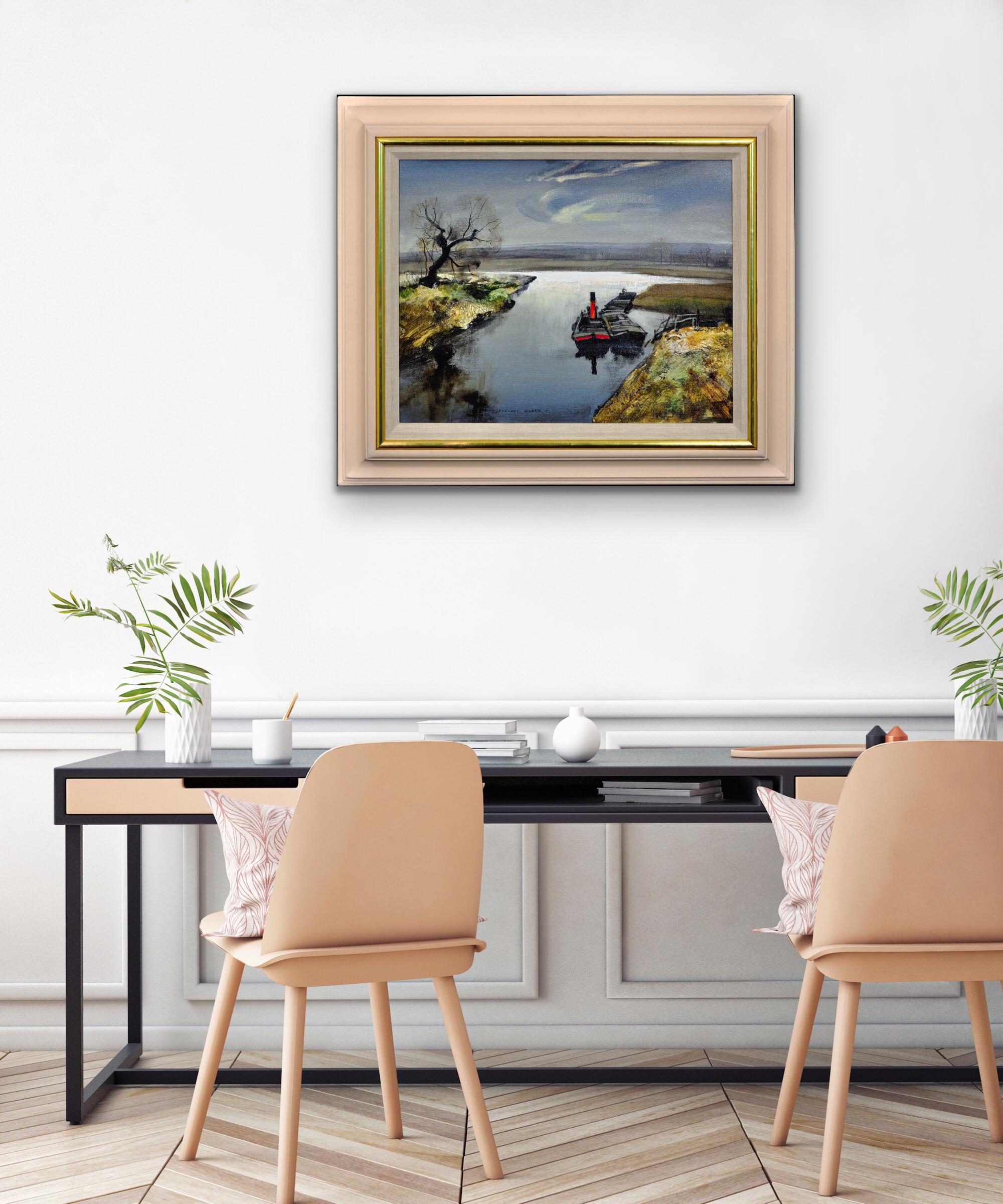 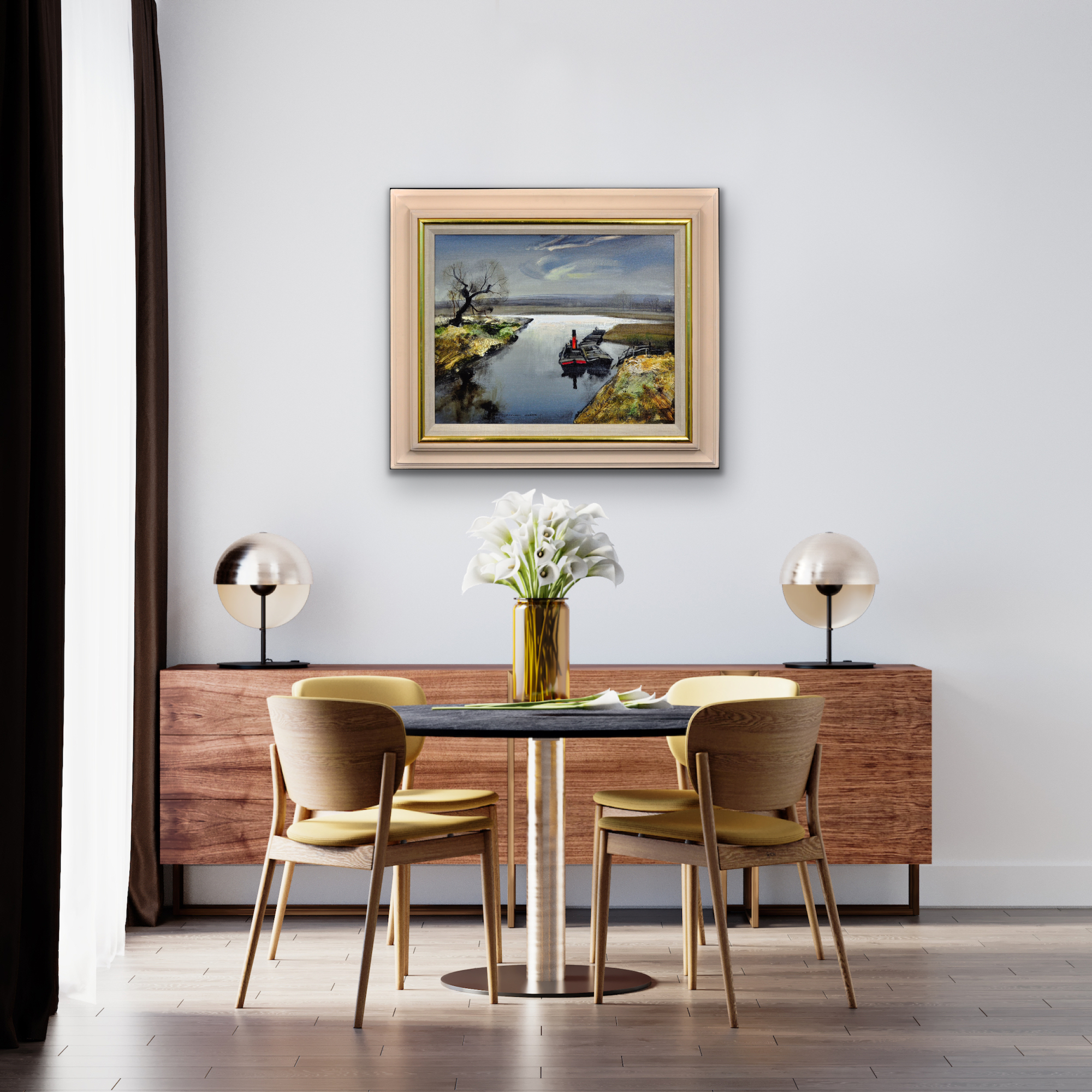 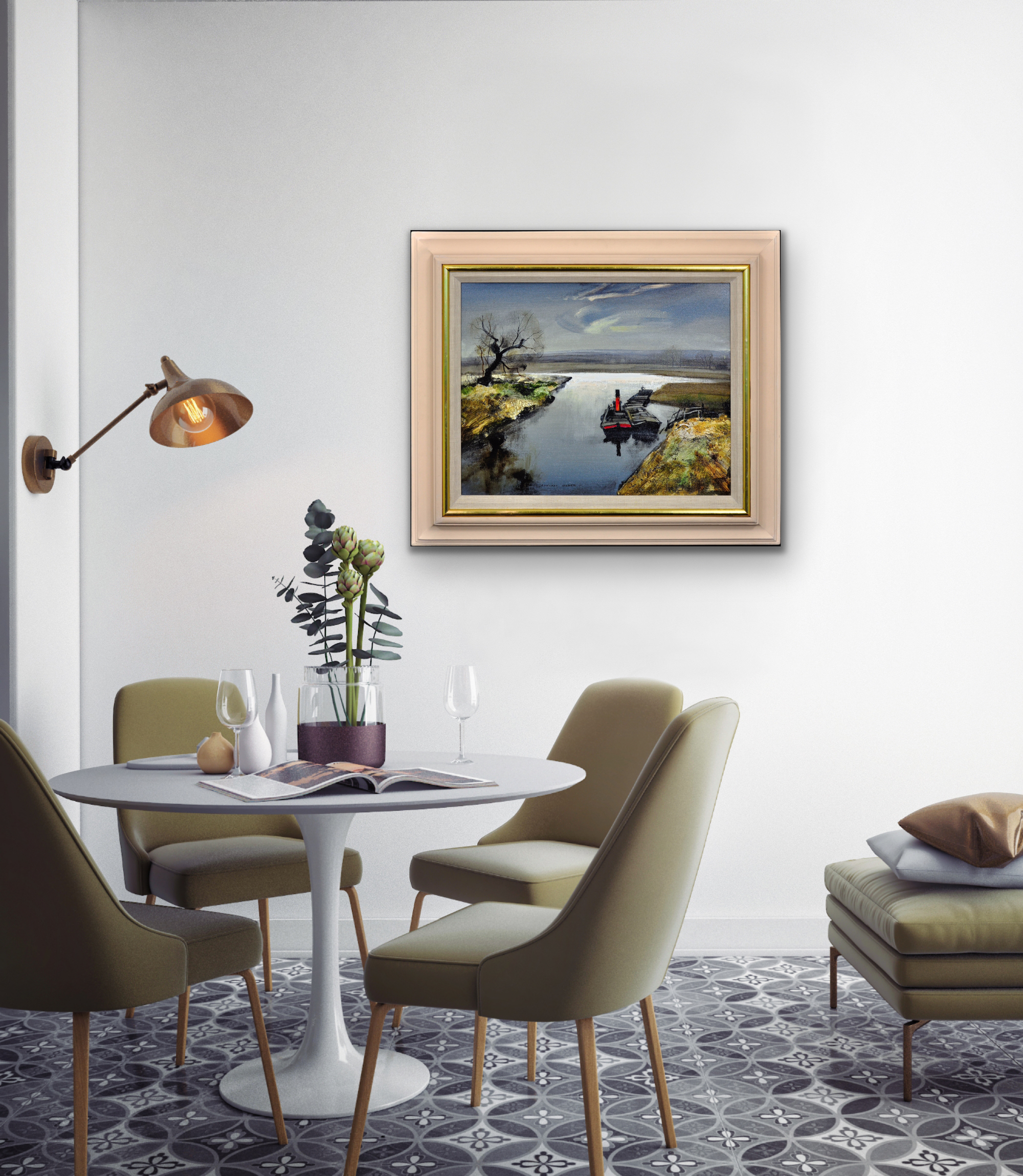 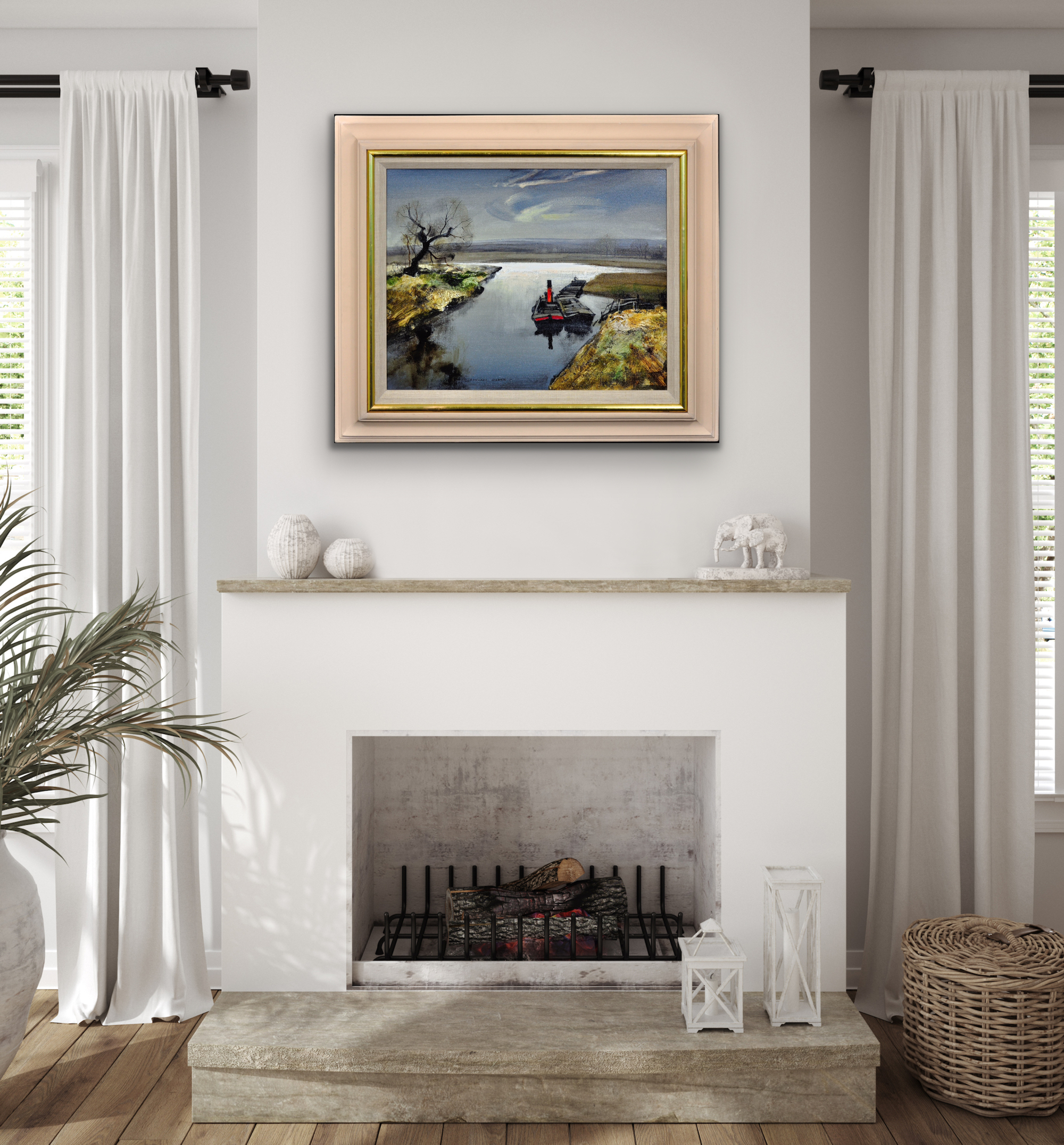 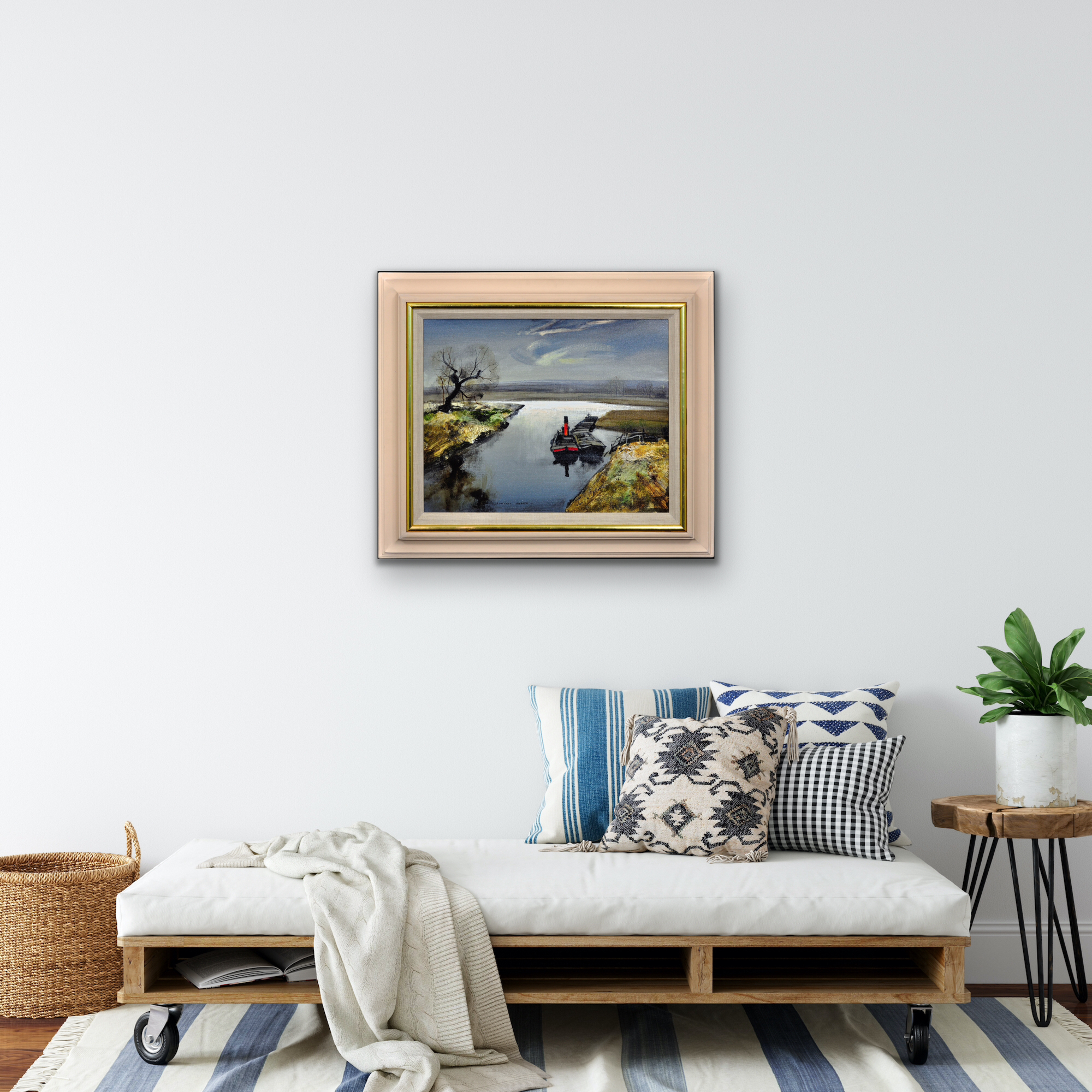 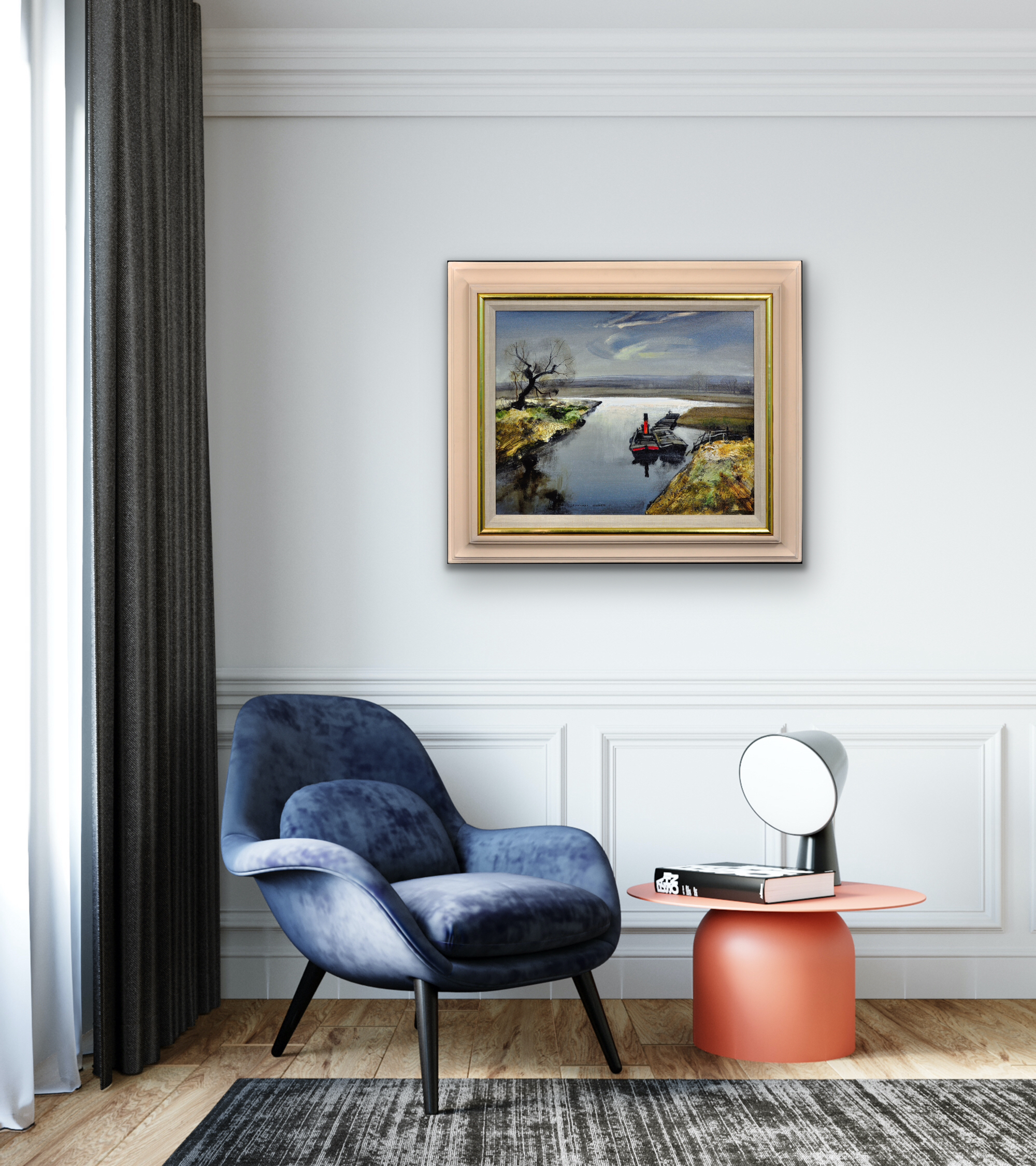 Available for sale from Big Sky Fine Art; this original oil painting by Rowland Hilder dating from the 1950s.
The painting is presented and supplied in its’ original frame (which is shown in these photographs).
The painted surface has benefitted from cleaning and conservation, which took place in 2021 on our instructions.
This vintage painting is in very good condition, commensurate with its age. It wants for nothing and is supplied ready to hang and display.
The painting is signed lower left.
Provenance: From the personal art collection of Art Dealer and Thackeray Street, Kensington Gallery owner Duncan Campbell 1943 – 2011.

Rowland Hilder was a highly accomplished and popular artist and who is recognised world-wide as an ambassador of English landscape and seascape.
He was born on 28 June 1905 at Great Neck, Long Island, USA. His parents were Roland and Kitty Hilder (née Fissenden). Rowland began his education at Morristown, New Jersey and was first introduced to art when his father took him to the mansions of the resident New York millionaires.
Following the outbreak of World War 1 his English father decided to return to his native county of Kent and to enlist in the British army. The family therefore returned home on the Lusitania in 1915. Rowland Hilder’s education continued at Aske’s, Hatcham, New Cross, South London. One of his teachers noticed his talent for drawing and encouraged him to apply for Goldsmiths’ College School of Art. He subsequently trained there Under E.J. Sullivan from 1922-25. It was here that he met botanical artist Edith Blenkiron. They later married and had two children.
Hilder was later to lecture at Goldsmiths’ College between the wars, as well as teaching at the Central School of Arts and Crafts, the Royal College of Art and Farnham School of Art.
Hilder career as a book illustrator began when he was commissioned by Oxford University Press as a book illustrator. His decorative end papers and drawings for Treasure Island won him The Times illustrators award. He illustrated several other books, including Moby Dick. In 1929 he was commissioner by Shell to illustrate Then and Now, a travel guide, which started a long relationship with the company with posters sponsored by them. In 1953 he and his wife were commissioned to create the Shell Guide to Flowers of the Countryside. Demand for this publication was so great that Shell set up an office to deal with correspondence and 13 million plates were published. This work, in which Rowland painted the landscapes and Edith painted the flowers, was serialised in the colour magazines Picture Post and Illustrated, reaching a readership of millions each week. Hilder also became a cover artist for Radio Time.
During the Second World War Hilder was an army Camouflage Officer and illustrated the Army Manual on Camouflage. He then became a mainstay of the Ministry of Information, producing posters, illustrations and drawings for press advertisements.
After the war Hilder turned to popularising his art and set up the Heron Press to produce calendars and greetings cards. His work became very popular with a vast audience who loved his nostalgia for an unchanged landscape. By 1951 he was the most popular landscape artist of the time. In 1960 the publishers Royle took over the Heron Press and Hilder became its consultant art adviser. His career as a commercial illustrator virtually ended and he was able to devote his time to painting for painting’s sake.
Hilder exhibited at the leading London galleries, including the Royal Institute, the Royal Academy and the Fine Art Society. He was elected a member of the Royal Institute in 1938.
Hilder served as President of the Royal Institute of Painters in Watercolour between 1964 and 1974 and was awarded the OBE in 1986.

Rowland Hilder spent most of his life living with his family at Blackheath in London and his recreations included music and badminton. He was also a great sailor and kept a coastguard’s cottage at Shell Ness, at the mouth of the river Swale, as a base for his marine painting.

Hilder enjoyed a long and fruitful association with the countryside of the North Downs, from when he used to cycle into Kent as a student to his later years. He was the first to see the drama and picturesque beauty of the oast houses in Kent with their white caps and surrounding orchards. One of his most notable works is The Garden of England, which he worked on over several years and which was the most popular work at the exhibiition Landscape in Britain 1850-1950, staged at the Hayward Gallery in London in 1983. He is also recognised for his paintings of the Thames with its sailing vessels and old buildings. Hilder has been called the ‘Turner of his generation” and according to the Dictionary of National Biography ‘The description “Rowland Hilder country” (attached primarily to the weald of Kent) evokes a landscape as distinctive and personal as ‘Constable’s country” along the Suffolk Stour’. This is a remarkable tribute indeed.

Today, Hilder’s work is highly collectable and is represented in several public collection at home and abroad. His work Cable Ship, Greenwich was purchased by the National Gallery of Australia.

This is a very serene painting of an open barge on the River Bure in Norfolk. The touches of red on the funnel and bow of the vessel bring the work to life, in a landscape of otherwise muted tones. The faded grass on the banks of the river suggest that it is perhaps the end of winter; there is a large tree on the left bank, bereft of leaves, silhouetted against the cool blues and greys of the sky, and reflected back into the water below. The river is perfectly still, branching in the background, running horizontal across the painting. The overall image is one of peace and tranquility, with a suggestion that spring is not far away. 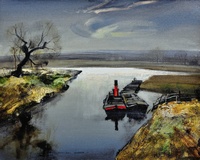