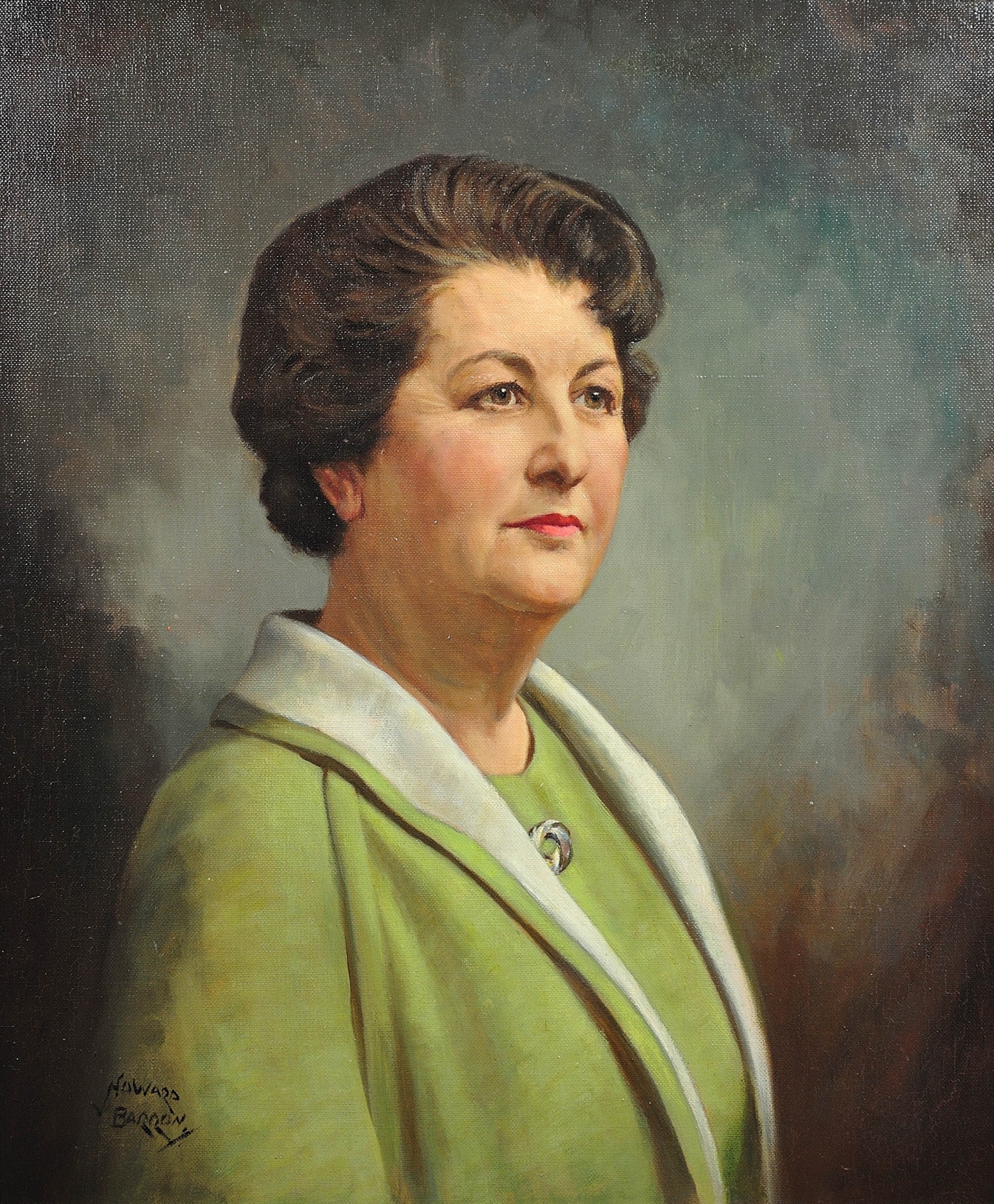 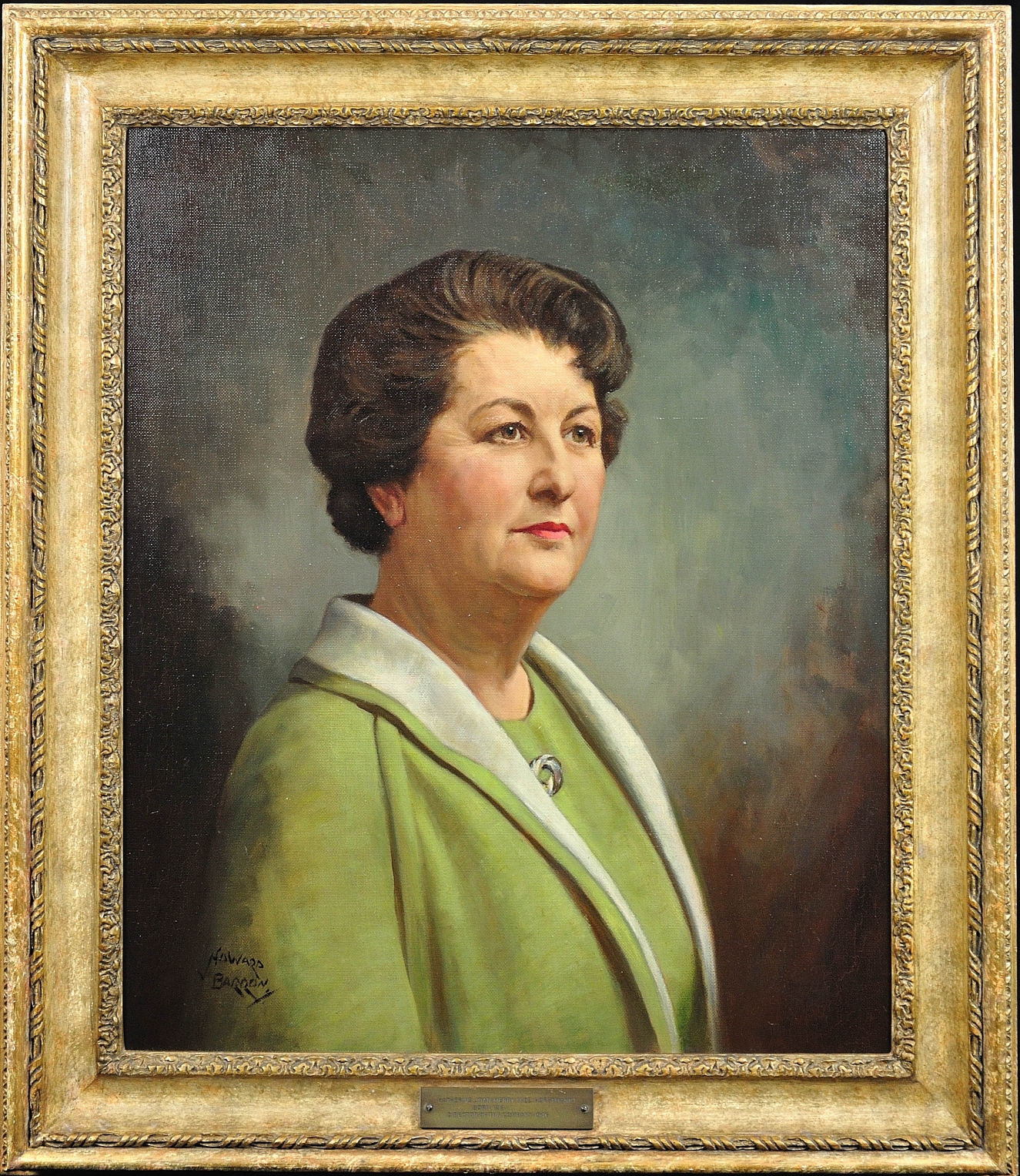 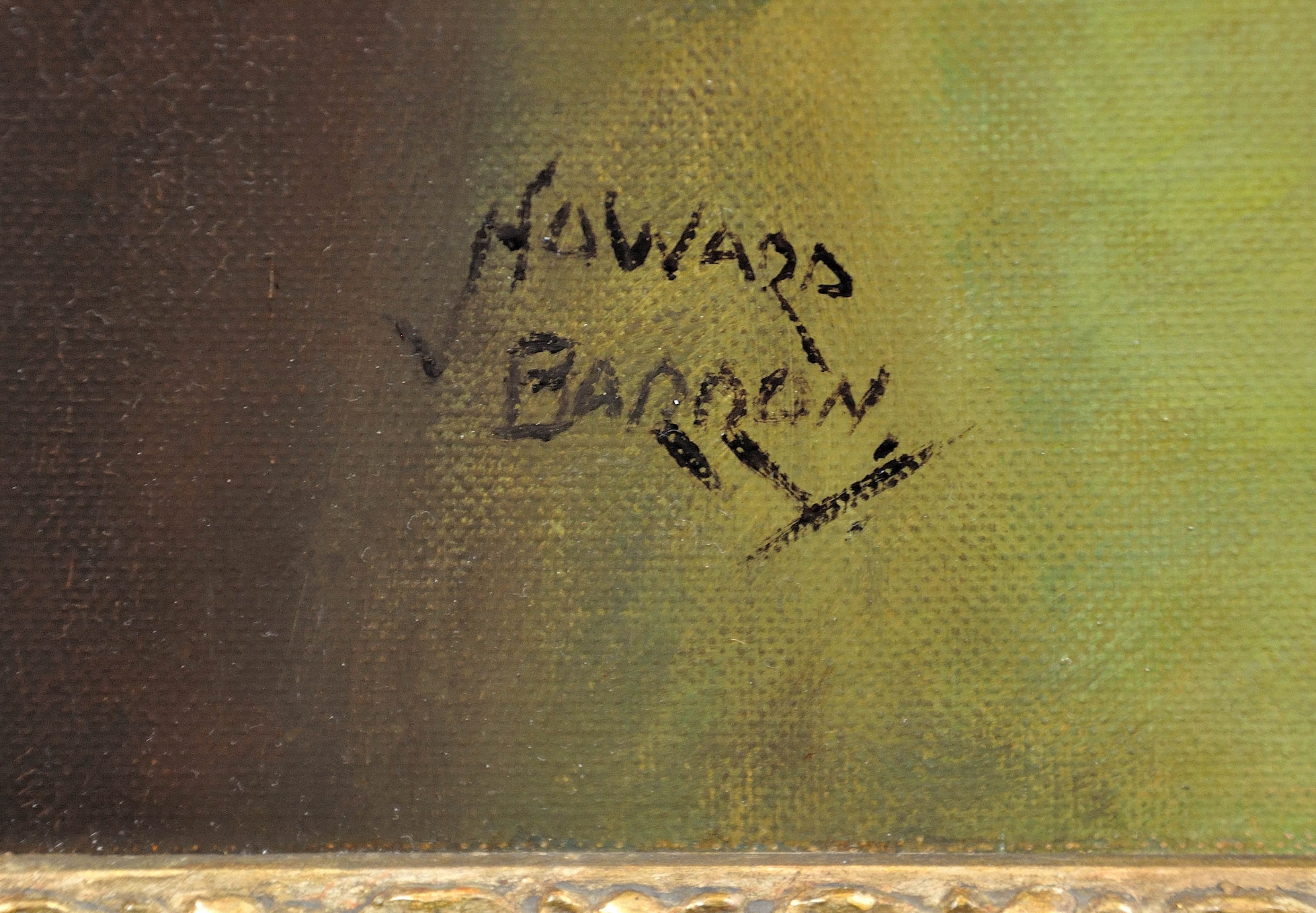 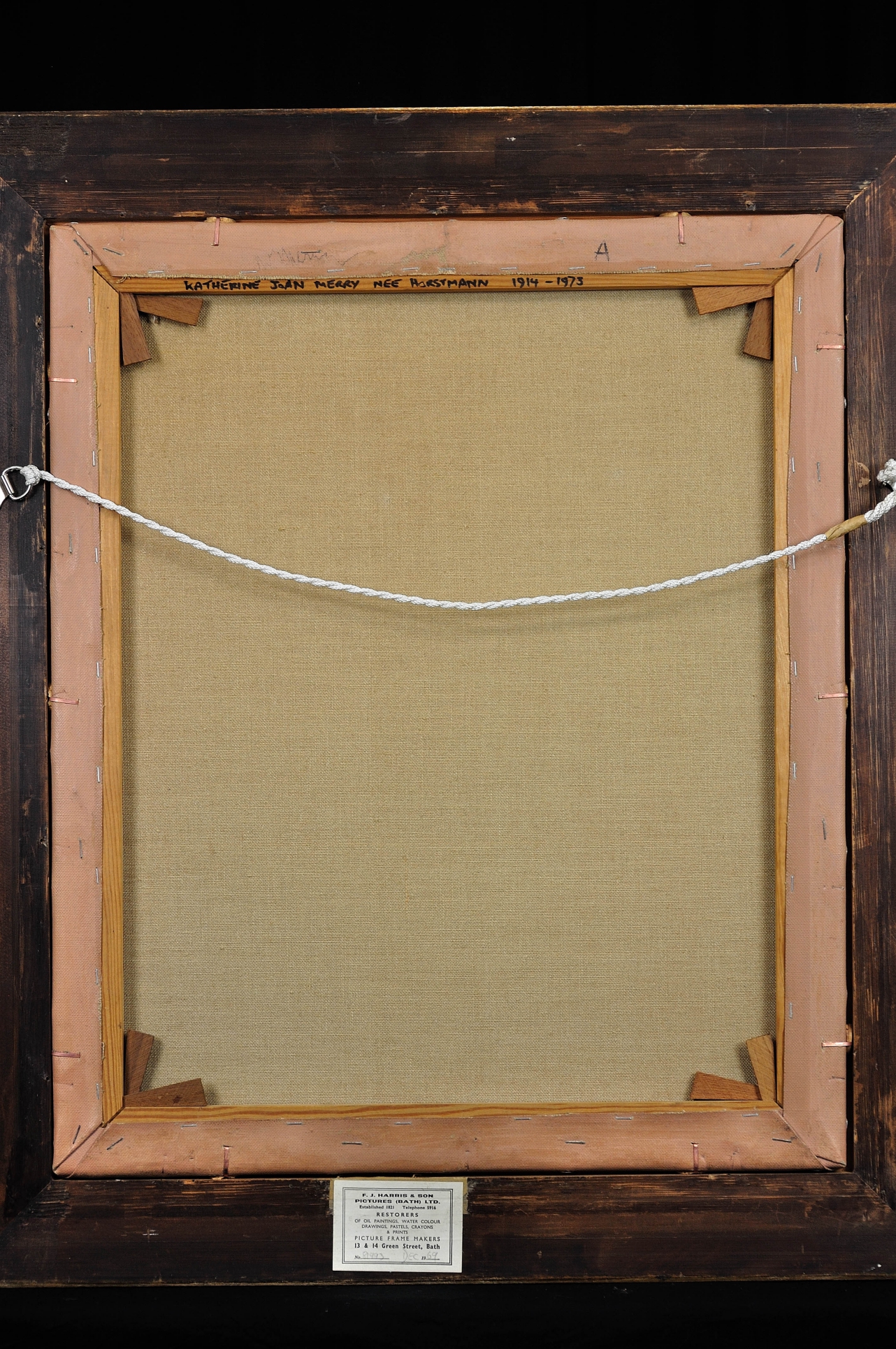 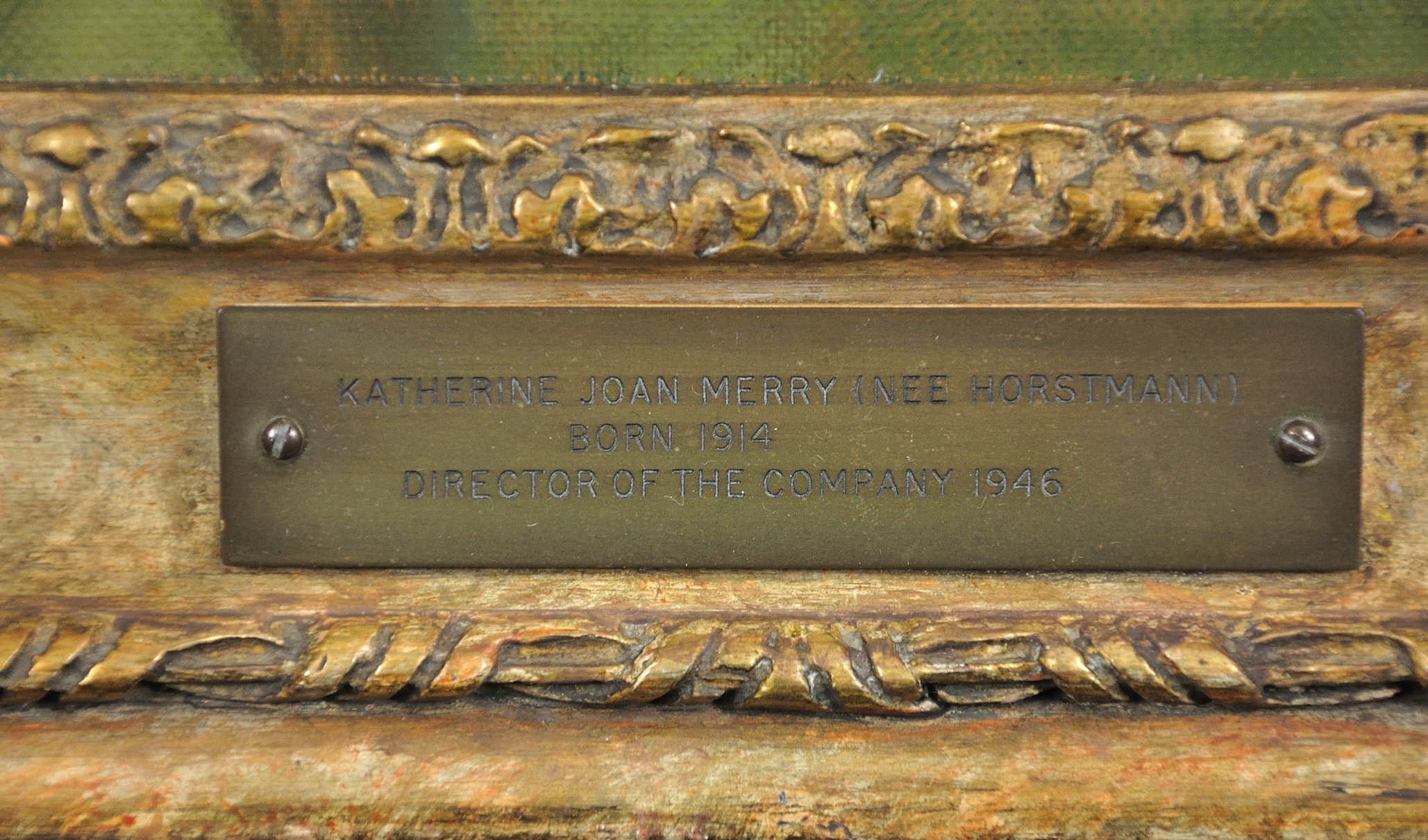 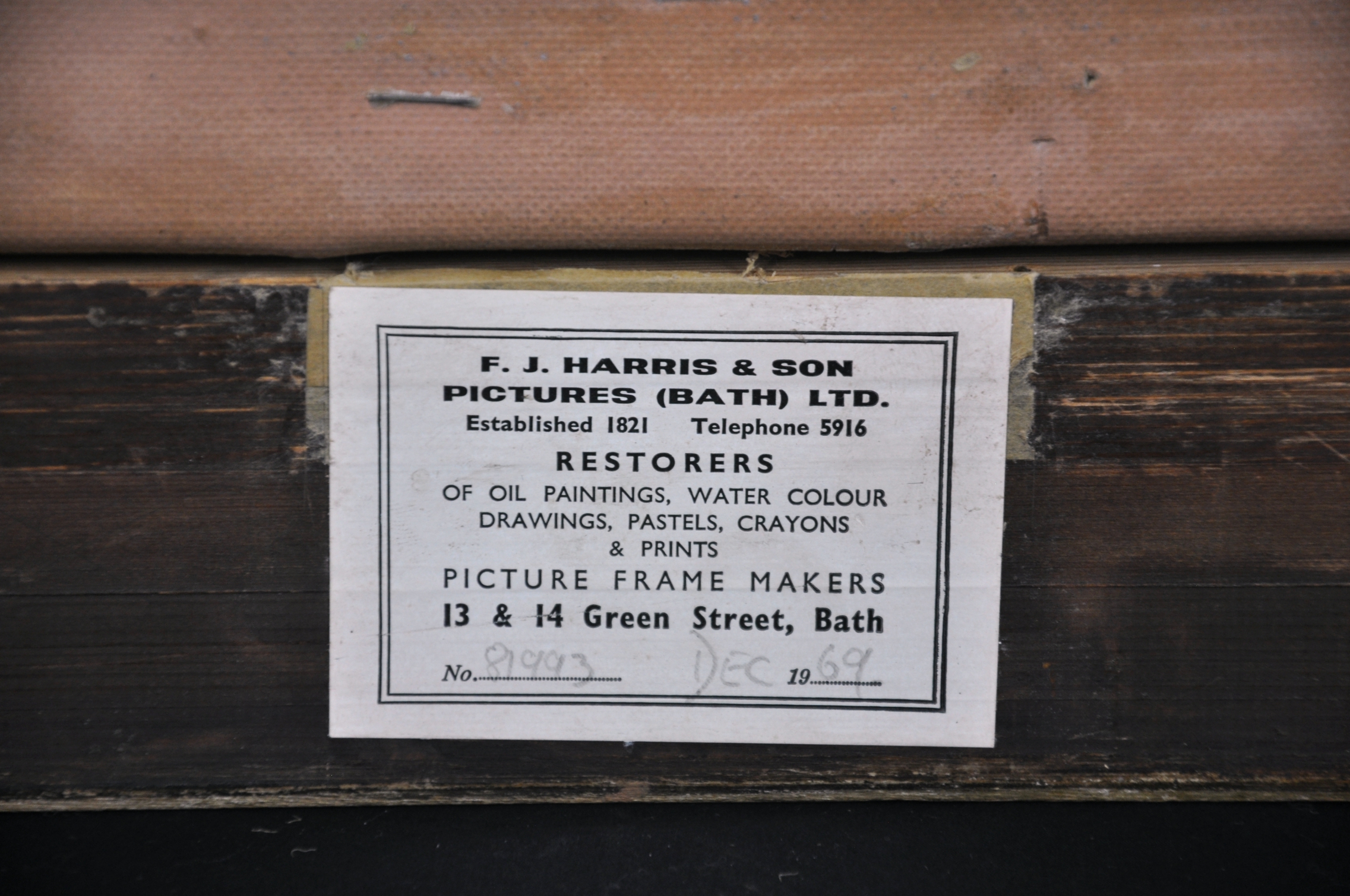 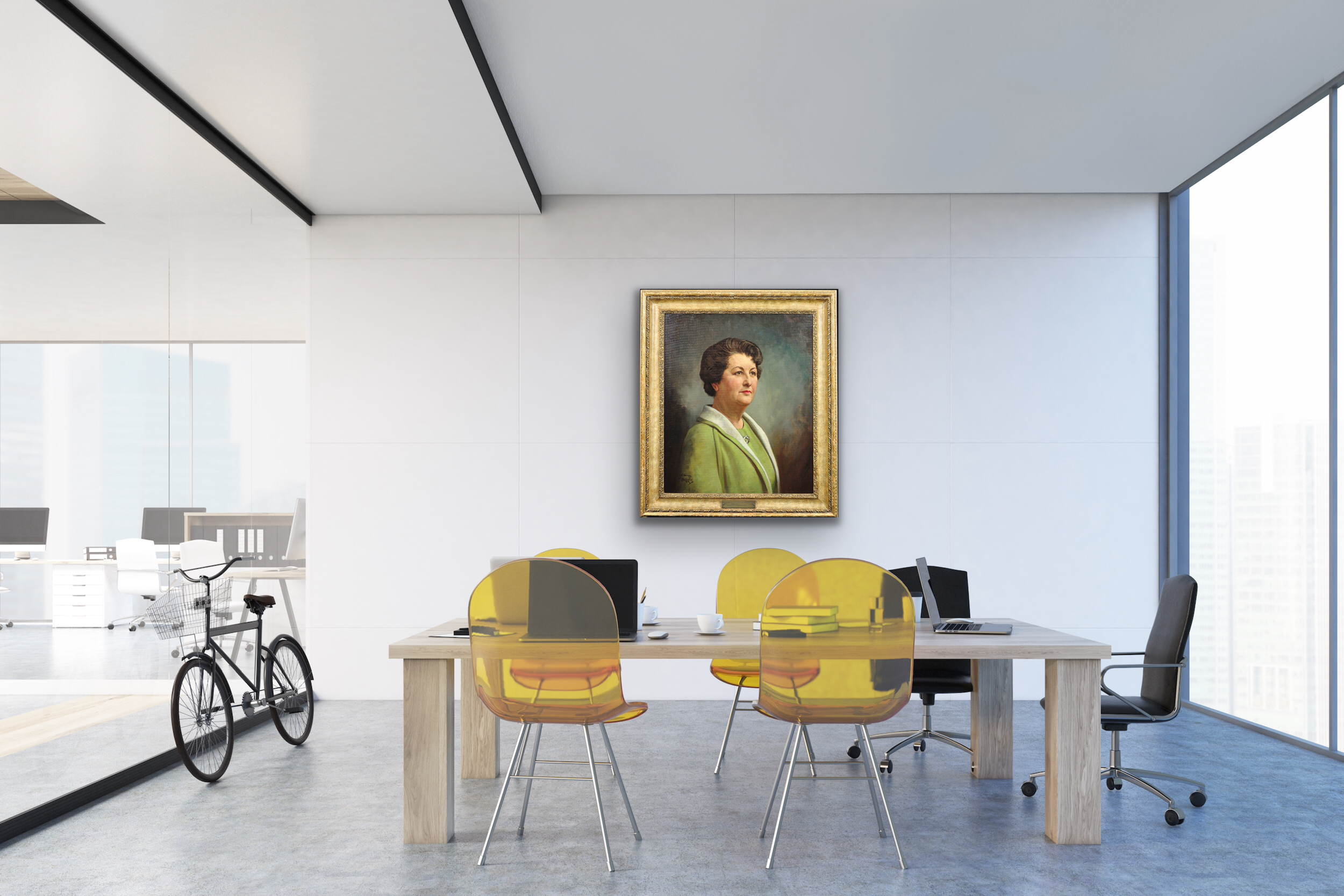 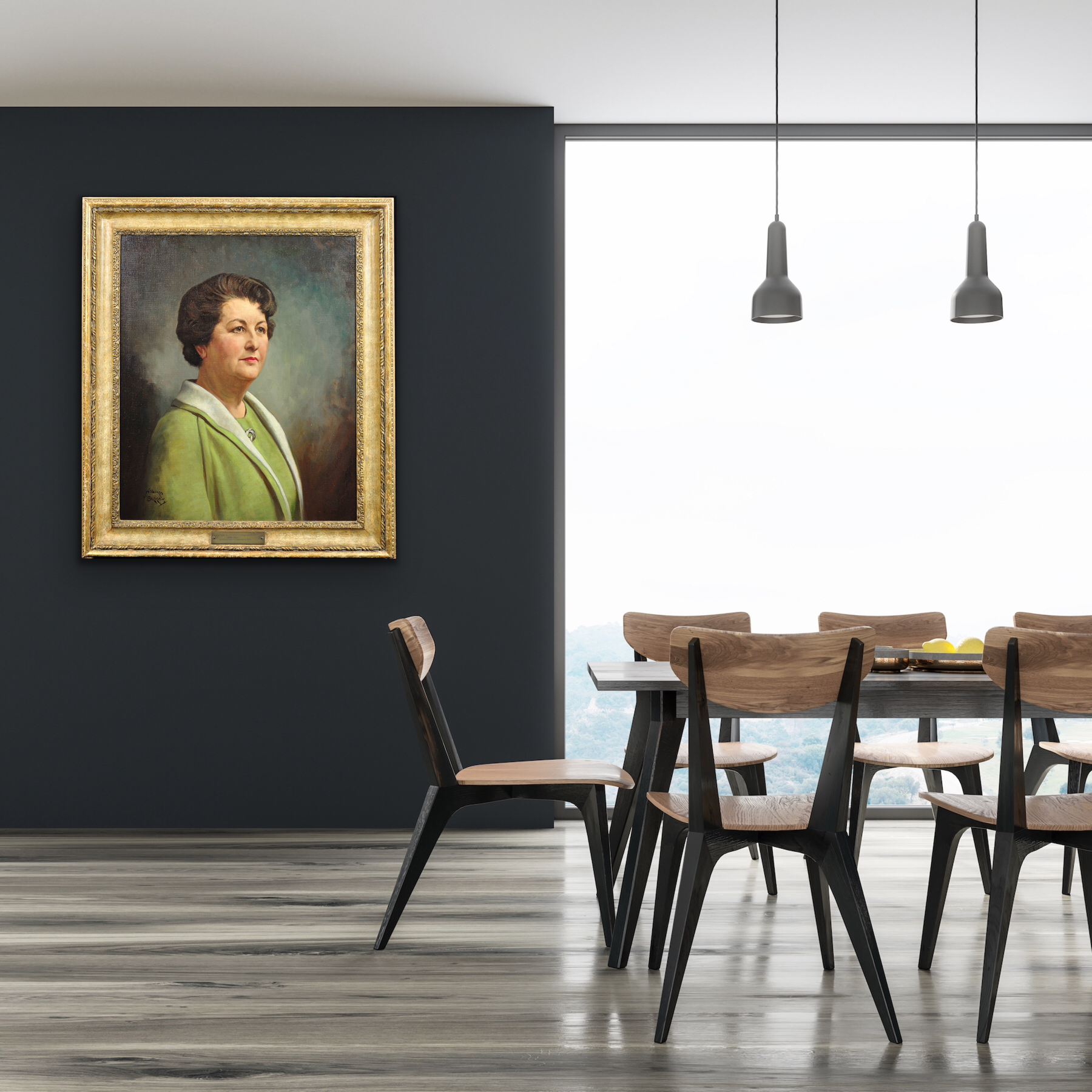 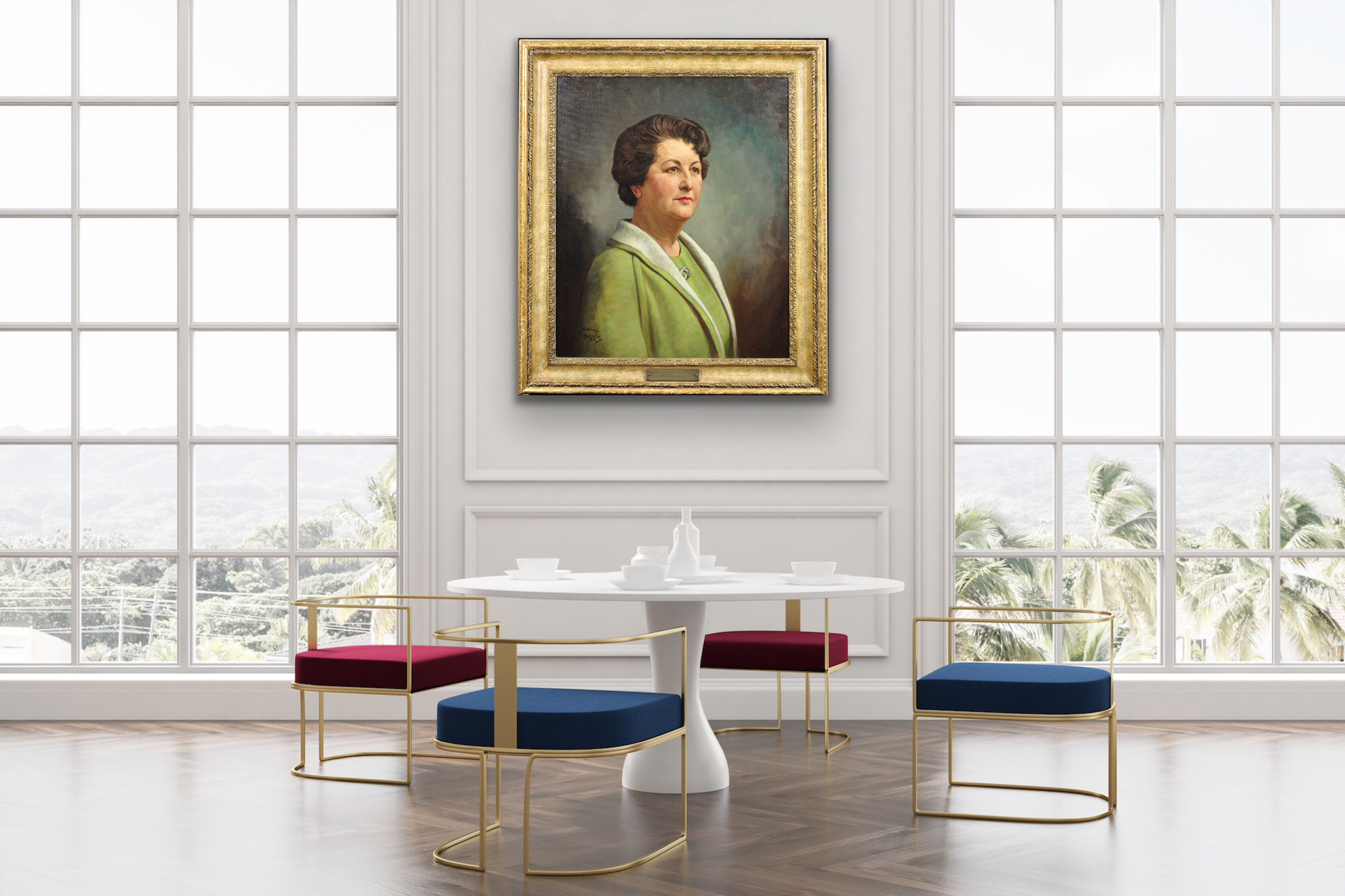 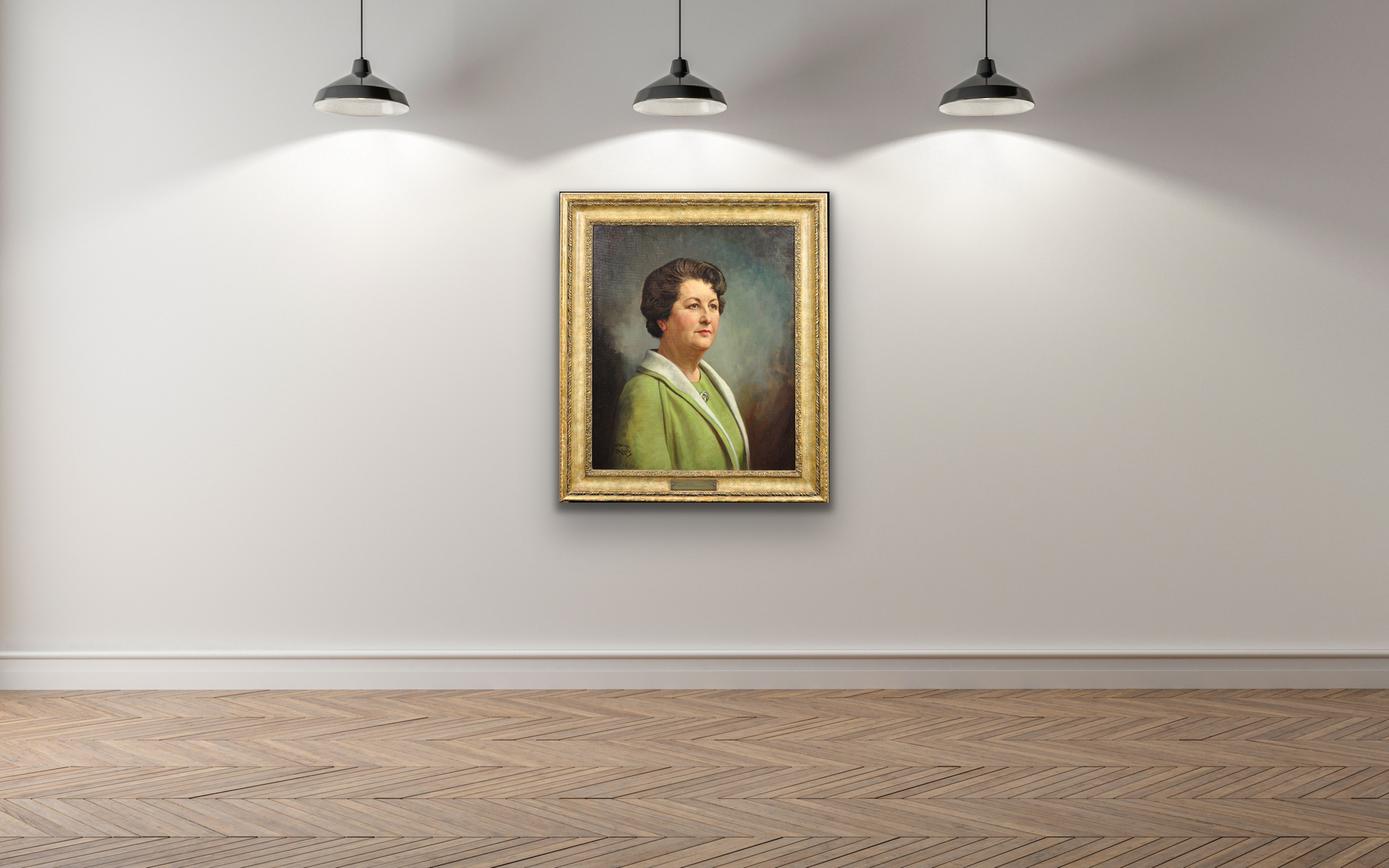 For sale from Big Sky Fine Art; this original oil painting portrait by Howard Barron dating from 1946 is presented and supplied in its original frame (which is shown in these photographs).
The painted surface has benefitted from cleaning and conservation, which took place in 2020 on our instructions.
This antique painting is in very good condition. It wants for nothing and is supplied ready to hang and display.
The painting is signed lower left.
Provenance: Loaned to and exhibited at The Museum of Bath at Work in the city of Bath from 2009 to 2019. Previously with FJ Harris & Son Pictures (Bath) Ltd, 13 & 14 Green Street, Bath in December 1969 for framing.

Howard Barron was an English/Australian painter and draughtsman. He was born in Sidcup, Kent and educated at Christ’s Hospital, Horsham but migrated to Australia in 1924. He studied in Australia with Will Ashton from 1928-49 and quickly gained a reputation as one of a younger generation of Australian landscape painters. By 1933 his Afternoon, Kangaroo Valley had been purchased by Art Gallery of New South Wales. Throughout the 1940s he was prolific and successful, working in the Newcastle area, around the Hawkesbury, Murrumbidgee and Wollondilly rivers and near Armidale. He was a finalist in the Archibald Prize several times in the 1940s and became an associate member of the Royal Art Society of New South Wales.

Barron returned to England in the late 1940s and practiced widely as a portrait painter. He continued his art studies with Robin Guthrie and Ralph Middleton at the City and Guilds Art School 1950-51. In 1954 he won a silver medal at the Paris Salon and in 1965 he held his first solo exhibition in Britain at the Qantas Gallery.

He lived for a time in Cornwall, where he was elected to membership of a number of art societies including the St. Ives Society of Artists and the International Institute of Art and Letters. He exhibited with the St. Ives Society and also at the Royal Institute of Oil Painters and the Fine Art Society. He also lived in Copthorne, Sussex for some years before returning to Australia in the late 1950s., where he lived until his death in 1991.

Although he made his name as a landscape and marine artist Barron became well known for his portraits of prominent men and women. After the Second World War he was commissioned to paint two portraits of Sir Winston Churchill. On three occasions he was commissioned to paint the Queen and his portrait of Dame Nellie Melba for the main hall of Australia House in London attracted considerable publicity. He also painted a stunning portrait of Florence Austral, another Australian opera singer who achieved an illustrious international career in the first half of the twentieth century. This painting was gifted to the National Portrait Gallery by the University of Newcastle, New South Wales, and is part of the gallery’s collections of twentieth century Australian divas. When four-year-old Monique Grobben of Weston, ACT, was named Miss Pears in 1978 part of her prize was a portrait of her by Howard Barron. He also painted the portraits of many business leaders and institutional heads, so it seems very fitting that he should have also painted Katherine Joan Merry (nee Horstmann).

Today the work of Howard Barron is widely represented in many UK and Australian collections, including the Imperial War Museum in Canberra, and in notable private collections.

The Horstmann company story is one of engineering success that began in 1828 when Gustav Horstmann was born in Westphalia, Germany. He emigrated around 1850 to become foreman of a clock and watchmakers in London. He then moved to Bath where he set himself up as a Watch and Clockmaker. In 1856 he won a prize ‘to devise the most accurate and fool proof device to measure the smallest item.’ This was a micrometer, the original of which is now in the Science Museum. Gustav then patented a device for ‘a new or improved mode of obtaining motive power, which power can be used for winding clocks, timepieces and other mechanisms and also for ventilating hothouses, green houses and all buildings where a uniform temperature is desirable’. He made several self-winding regulator clocks using this principle and then adapted his engineering knowledge and skills into other areas. The Horstmann factory in Bath thrived for many years and was managed by Gustav’s descendants. The now famous Horstmann cars were manufactured in Bath between 1913 and 1929. Approximately 1,500 original cars were made, of which only around nine still exist, seven in the UK and two in New Zealand. The family firm moved out of Bath a few years ago, but the company is now a world leader in the manufacture of heating and hot water controls and wireless controls.

Some of the history of this fascinating family and firm is shown at the Museum of Bath at Work on Julian Road, Bath, Somerset BA1 2RH, UK.

This commissioned portrait of Gustav Horstmann’s granddaughter, Katherine Joan Merry (nee Horstmann) b.1914 - d.1973 was performed by Howard Barron in 1946 when she held the office of Director of The Horstmann Gear Company Limited. The painting was hung in the company premises at the Newbridge Works in Bath, Somerset. She oversaw the transition from wartime production through a difficult hiatus to a major expansion in products and output for domestic and overseas markets in the 1950s.

She is shown from the head to the waist, in a composed and understated pose. She is a very pleasant looking middle-aged lady, with brown hair and brown eyes. She is wearing a pale green dress with matching jacket, with contrasting cream lapel and a simple classical silver coloured brooch. The composition is tastefully and carefully executed to produce a timeless portrait.