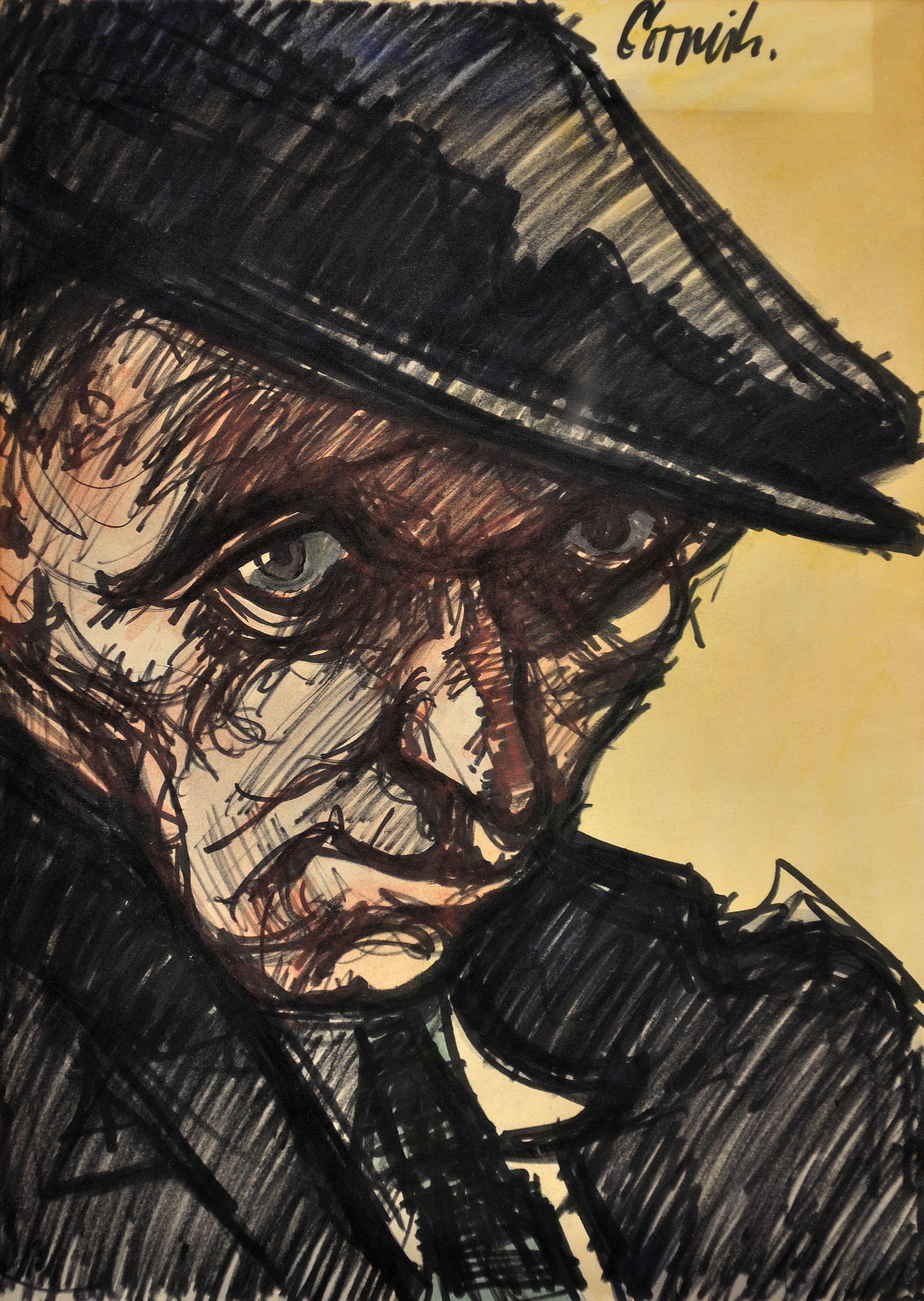 Sold by Big Sky Fine Art; this original drawing by Norman Cornish dates from 1962.
The work is presented and supplied in its’ original mount and glazed bare wood frame to maintain the historical links with the collector in mind. Gallery labels with inventory information are present on the reverse.
Previously with The Stone Gallery, St Mary’s Place, Newcastle Upon Tyne.

The internationally acclaimed artist Norman Cornish MBE was a coal miner, teacher and artist whose works commemorate the industrial past with humanity and warmth. He is famed for his unique insight into the mining world of the northeast of England and indeed regarded as the most celebrated mining artist; and his works are some of the the most sought-after contemporary works in the UK. He was a contemporary and friend of fellow artist L.S. Lowry. The lives of Cornish and his miner-artist contemporaries inspired the play The Pitmen Painters.

Norman Cornish was born on 18th November 1919 in Oxford Street, Spennymoor, County Durham, the eldest of nine children. His father was a miner. The family later moved to Bishops Close Street, a house with no inside sanitation, adjacent to the old ironworks and the gasworks. As a boy, Norman shared the terraced house with his parents and younger brothers, Tom, Jack and Jim. The conditions were primitive, and at the age of 7 Norman contracted diphtheria. The town was very much in decline with no major employers and most the of the men walked to collieries in nearby villages to work. When Norman was 14 his father lost his job. Norman, was obliged to leave school and went to work in the nearby Dean and Chapter Colliery at Ferryhill. His first working day was Boxing Day 1933.

Art was always a passion for Norman, who had drawn and painted from a young age. His early memories influenced his lifelong passion with the local social scene. The area in which he grew up suffered severe unemployment, which was compounded by the deprivation of the General Strike of 1926. When he entered life in the colliery this hectic activity also made an impression on him that was to be reflected in his paintings many years later.

Shortly after Norman started his mining career he was accepted as a member of the Spennymoor Settlement. This was a publically funded educational institution set up for the miners as a recreational centre with art and drama groups. It was run to provide a wide scope of education and interest for the otherwise impoverished community. Here, Norman learnt to paint, made friends with other well known mining artists and then began to exhibit his works locally. Indeed, Cornish later became the last surviving member of what became known as the “Pitman’s Academy”. He later wrote ‘The only tuition I got was from the Settlement. I didn’t have a lot of time, but I had to paint…it’s an itch that you have to scratch.”

During the Second World War Cornish worked as a miner, and also took on fire watch duties. He continued to paint when he could. In May 1953, Norman and his wife Sarah moved into another colliery house in Bishop’s Close Street and the family lived there until 1967, when they moved to Whitworth Terrace in Spennymoor, where Norman lived for the rest of his life.

After the war Cornish taught at Sunderland Art College, and showed his works at the Northern Academy and with the Stone Gallery, Newcastle upon Tyne. Later he exhibited with Nicholas Bowlby and at Tunbridge Wells.

In 1947 five of Norman's paintings were bought from the Settlement by Dr Revans, the Director of Education for the newly formed National Coal Board, and were destined for Hobart House, the NCB offices in London. The sale resulted in Norman being asked to co-organise an exhibition, 'Art by the Miner', in London's Oxford Street. Minister Edward Heath bought two of Cornish’s works, which was a source of wry amusement to the artist with his staunch socialist background.

Norman's keen observational eye for the interpretation of the everyday activities of the mining communities was recognised in 1962 when he was commissioned to paint a 30-foot mural typifying life in County Durham for the new County Hall in Durham City, officially opened in 1963 by Prince Phillip. Although Norman had been the subject of television documentaries previously, notably the Tyne Tees production 'Burning Heads' in 1960, it was in 1963 that his talents were broadcast nationally on the Monitor programme 'Two Border Artists', introduced by Sir Huw Wheldon.

In 1966, after 33 years of underground mining, Norman finally left the pits, suffering from a worsening back complaint. The decision meant that he had to find some means of supporting his family, although he was allowed to continue to live in his NCB house. Naturally Norman was concerned about his family's welfare and his ability to provide for his family with only his art, but his wife Sarah demonstrated huge confidence in him and actively encouraged him to
concentrate on his painting, reassuring him of her ability to cope with the
finances and the needs of their two teenage children, Anne and John.
Norman's increasing reputation as an artist enabled him to obtain a visiting
lectureship for one day per week at Sunderland College of Art, and this,
coupled with the sale of his pictures through The Stone Gallery, was sufficient
to sustain the family through these times of necessary frugality.

Within a few months of becoming a self-employed professional artist, Tyne Tees Television approached Norman and asked him to spend a week in Paris critically appraising the art of the French capital through the eye of the northern artist. The resulting programme was screened as 'Cornish in Paris'.

Spennymoor at that time was changing rapidly and many of the street scenes
that Norman painted there are the only record of a time and place that no longer exist. The value of Norman's work as a social historical document as well as an artistic oeuvre was becoming apparent and his significance as a major contemporary artist was reinforced in 1974 when he was awarded an honorary Master of Arts degree from Newcastle University.

In 1987, at the age of 65 Norman was persuaded to write his autobiography, A Slice of Life, which was published to coincide with his 70th birthday in 1989. Cornish reflects on his work, writing, "I made drawings of pub workers in days past because l was fascinated by the men standing at the bar drinking and talking, or sitting playing dominoes. I was attracted by the wonderful shapes that they make in their varied attitudes. I also realised that life would change in some ways. The local collieries have gone, together with the pit road. Many of the old streets, chapels and pubs are no more. A large number of the ordinary but fascinating people who frequent these places are gone. However, in my memory, and l hope in my drawings, they live on. I simply close my eyes and they all spring to life."

Melvyn Bragg wrote the introduction to Cornish’s autobiography and re-launched his Melvyn's 'Monitor' film of 1963, featuring Norman in the distinguished company of Stanley Spencer and Graham Sutherland.

On his 90th birthday he and his wife Sarah were guests of honour at Spennymoor Settlement for the launch of ‘The Quintessential Cornish” by by Dr. Robert McManners and Gillian Wales, and the Settlement mounted its most prestigious exhibition ever, finally allowing local people an opportunity to view Norman’s work in the town which was his home throughout his life.

Cornish was granted an honorary doctorate from Sunderland University in 2012 and received an MBE in the same year. He said of this ‘I am getting on in years, and when you get to my age, not much surprises you, but this has come as a complete shock.” He died on 1st August 2014 aged 94.

Norman Cornish belonged to a generation that struggled just to survive, but he had in irrepressible skill and a compassion for ordinary people which lives on through his works. Unlike his friend Lowry, Cornish painted real people, drawn from life, never posed, and he did so with grace and grit. Although he transcended the hardships of working life to become a highly successful artist, he never compromised his roots; the characters he drew reflect the life they have lived, but without malice or even disaffection. His works shows a profound understanding of human behaviour and interaction and the visual relationships that constitute a society.

In 2015 an early self-portrait by Norman Cornish sold at auction for almost twice its estimated price after a painting of his wife was discovered on the back. The discovery was made just hours before the painting was to be sold by Anderson and Garland in Newcastle. It had been valued at Ł7,000, but went under the hammer at Ł13,500. Mr. Cornish’s son John identified the woman as his mother Sarah.