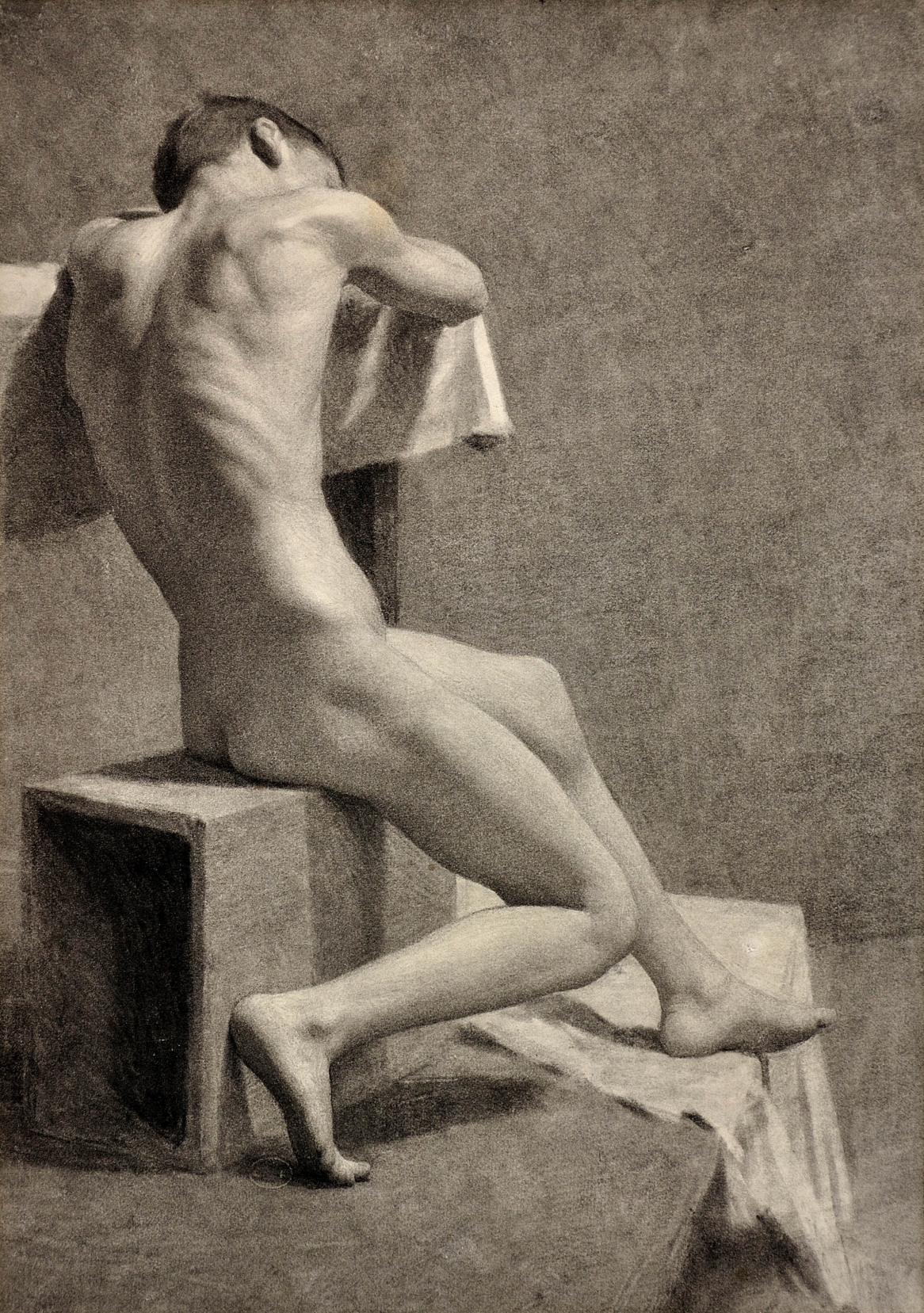 Available for sale from Big Sky Fine Art; this original drawing by Harold Knight dates by deduction to 1895.
The drawing is presented and supplied in a sympathetic contemporary frame (which is shown in these photographs), mounted using conservation materials and behind non-reflective Tru Vue UltraVue« UV70 glass.
This antique charcoal drawing is in very good condition, commensurate with its age. It wants for nothing and is ready to hang and display.
Embossed (ESK) blind stamp Examined School of South Kensington, which was the official stamp of the National Art Training School, which became the Royal College of Art in 1896.
The presentation retains the rectangular purple ink stamp inscribed Student's surname - Knight and Age 21, Registration No 3597, Subject No 8c2.
Provenance: Frederick Riley (1867-1915) an art teacher, by whom acquired from the artist when a student at Nottingham School of Art, 1888-1895; thence by descent.

Harold Knight was one of the outstanding portrait painters of his day and a leading figure in the art world. His paintings of women, nudes and other subjects, showed great sensitivity, a classical conception of beauty, grace and gentleness of line, and exceptional tonal values and smooth execution. Knight was, moreover, half of a remarkable couple as both he and his wife, Dame Laura Knight, were an impressive and powerful force in twentieth century art and gained international recognition. They remain firm favourites of art enthusiasts across the world.

Harold was born in Nottingham on 27 January 1874, the son of William Knight, an architect, and the second of five children. He was educated at the Nottingham High School before studying at the Nottingham School of Art where he was the star student of his day. He was known for his dedicated hard work and painstaking studies from the model. Whilst at the Nottingham School of Art he met Laura Johnson. She was 3 years younger than him and had had a troubled childhood. Whereas he was quiet and conscientious her temperament was impulsive, and she was attracted to the exotic and bizarre and capable of great bursts of energy. She was also parentless and in real poverty and over the next few years she was sustained by her friendship with Harold. The pair complimented each other well, and they married in 1903 at St. HelenaÆs Church, West Leake, Nottinghamshire. She, of course, went on to enjoy an exceptional career as an artist and became Dame Laura Knight.

In 1893, whilst at the Nottingham School of Art, Harold won a travelling scholarship from the British Institute which took him to Paris for a year, where he studied at the Acadķmie Julian under Jean-Paul Laurens and Benjamin Constant. Here he was much influenced by Impressionism. He also studied at the Royal College of Art.

In 1894 on his return from Paris Harold and Laura settled in Staithes, on the North Yorkshire coast, where he began painting landscape, seascapes and interior scenes featuring members of the local community. Until around 1907 the Knights lived mainly in Staithes, although they made several visits to Holland where, in Amsterdam, they spent some time studying the 17th century Dutch and Flemish art of Vermeer, Rembrandt and Hals. While staying in the artistÆs colony of Laren, Harold painted simple interior scenes with peasants and farm subjects in the manner of the artists of the Hague School.

After their return to England, Harold and Laura went to live in the artistsÆ colony of Newlyn in Cornwall. Initially Harold painted genre subjects as he had in Holland and Staithes using local people and Cornish landscapes executed plein air. Then, like his wife, he began to adopt a brighter palette, partly in response to the Cornish light. Around 1909 he embarked upon a more sophisticated series of paintings in well-furnished interiors, which he continued until the end of his life.

Until 1912 the Knights were able to rent the old farmhouse Trewarveneth with a big studio where Stanhope Forbes and Tom Goth had worked. They also had a painting hut on the coast at Lamorna. They then moved to Oakhill, a house in Lamorna converted from three cottages and bought a small car so they could make painting trips to Mousehole, Sennen Cove and St. Ives. The couple were associates of Alfred Munnings (Florence Munnings, his first wife, affectionately known as Blote became one of HaroldÆs models), who Laura adored but Harold did not, and Ella Naper, a stunningly beautiful artist who befriended them both but with whom Harold was infatuated. Both Harold and Laura Knight produced some of their finest work during these hedonic pre-war years, and their lives and those of their fellow artist at Lamorna are captured in the 2013 drama æSummer in FebruaryÆ.

The years that followed were more sombre. During the First World War KnightÆs principles led him to become a conscientious objector, which earned him the rebuke of many of his colleagues and former friends and put a strain in his mental and physical health, as he was required to work as a farm labourer. When the War ended, he and Laura moved to 9 Langford Place, St. Johns Wood, London, although they frequently returned to Cornwall to paint. From around 1930 he concentrated on his sensitive portrait work, for which he remained very much in demand, particularly by clients who were well known in public or social life.

In the early stages of his career Knight exhibited regularly at Nottingham CastleÆs local artists exhibition, then at the International Society. He also exhibited at the Paris Salon, where in 1925 he received a Silver Medal for his portrait of Ethel Barber.

Knight first exhibited at the Royal Academy in1896 and continued to exhibit there regularly, a total of 185 works during his lifetime. He also exhibited regularly at the Royal Society of Portrait Painters. In 1906 he had his first joint exhibition with his wife at the Leicester Galleries.

Knight was elected a member of the National Portrait Society, became an Associate of the Royal Academy in 1928 and was elected a Royal Accademian in 1937; a year after his wife had become the first woman ever to be elected as a Royal Accademian, making them the first husband and wife Accademians in the history of the Royal Academy. He was awarded the gold, silver and bronze medals at South Kensington, and won the South Kensington Scholarship, also the British Institute Scholarship in 1895 and a second medal at the Paris Salon in 1925.

Harold died at Colwall, near Malvern, Gloucestershire, on 3rd October 1961. He predeceased his wife by 9 years.

Both Harold and Laura Knight were an impressive and powerful force in twentieth century British art. As a couple they were fiercely committed to their life as artists. For many years they had little money and they certainly endured difficult and challenging times together, but in their later years, they also enjoyed the recognition they deserved.

As a quiet and gentle man Harold is often perceived to have been overshadowed in both his personal and artistic life by his more flamboyant wife, but his works are now equally appreciated for their exquisite style and sensitivity.

This original highly accomplished life study of a naked young man was executed by Harold Knight at the Nottingham School of Art when he was just 21.
At the time this drawing was produced only male students could attend the SchoolÆs Life Class. His fellow student (and later wife) recalled in her book Oil Paint and Grease Paint, 1936, ōIf the men worked from the living figure I had to go into the Antique Room, the hatred of those plaster figures stays with me todayģ I never got any benefit out of their studyö. After she left the School, Laura Knight employed Jack Price as a model. He was the first naked figure she drew and in lieu of a fee she gave him some of her studies to sell.

The piece was acquired from the artist by Frederick Riley, who was an art teacher at Nottingham School of Art and passed through his family. The drawing features a naked young man and three basic boxes or blocks. He is seated on the centre box, his feet are on the lower block and his upper torso is twisted away from the viewer, as he rests his heads on his lower arms on the highest block. There are white sheets draped over the blocks. There is therefore no significant background, detail
or context of age to distract the eye, merely the skilful depiction of the human body in the glory of youth. The subject of the drawing is almost certainly the half blind Jack Price, or Mark Wardley, both of whom were hired by the Nottingham School of Art as models for its Life Class.
This is an absolutely stunning piece, eloquently demonstrating KnightÆs sensitivity and early talent.