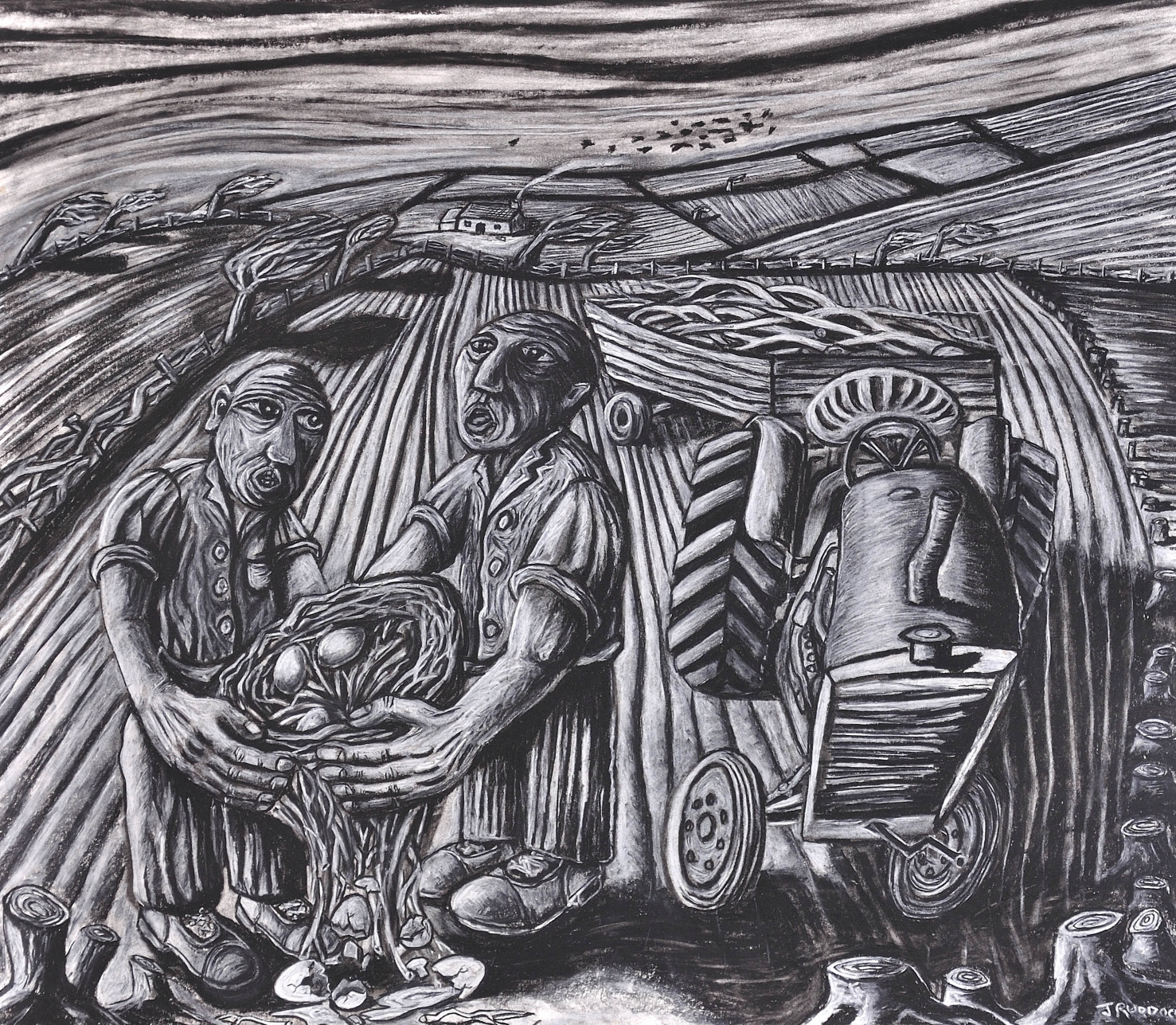 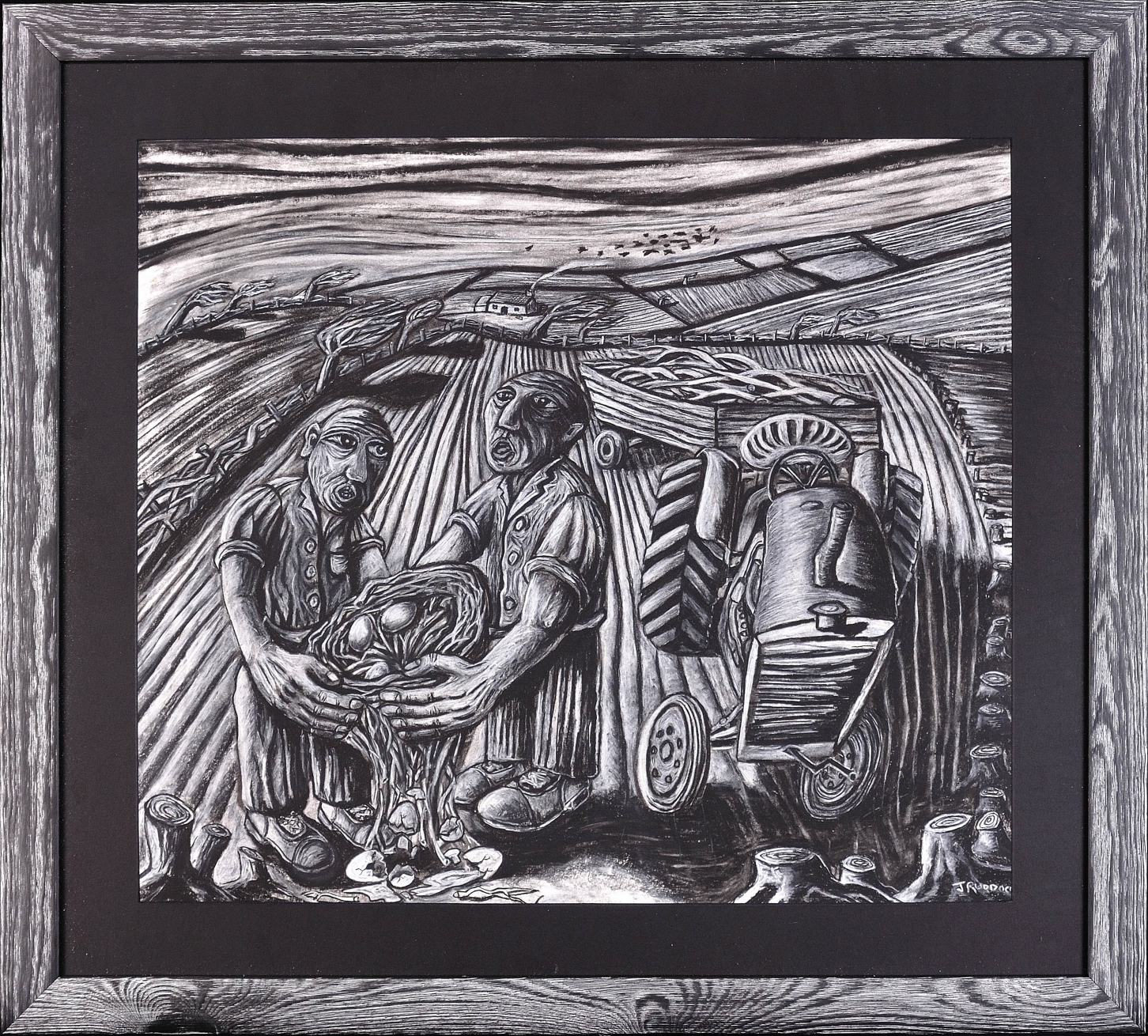 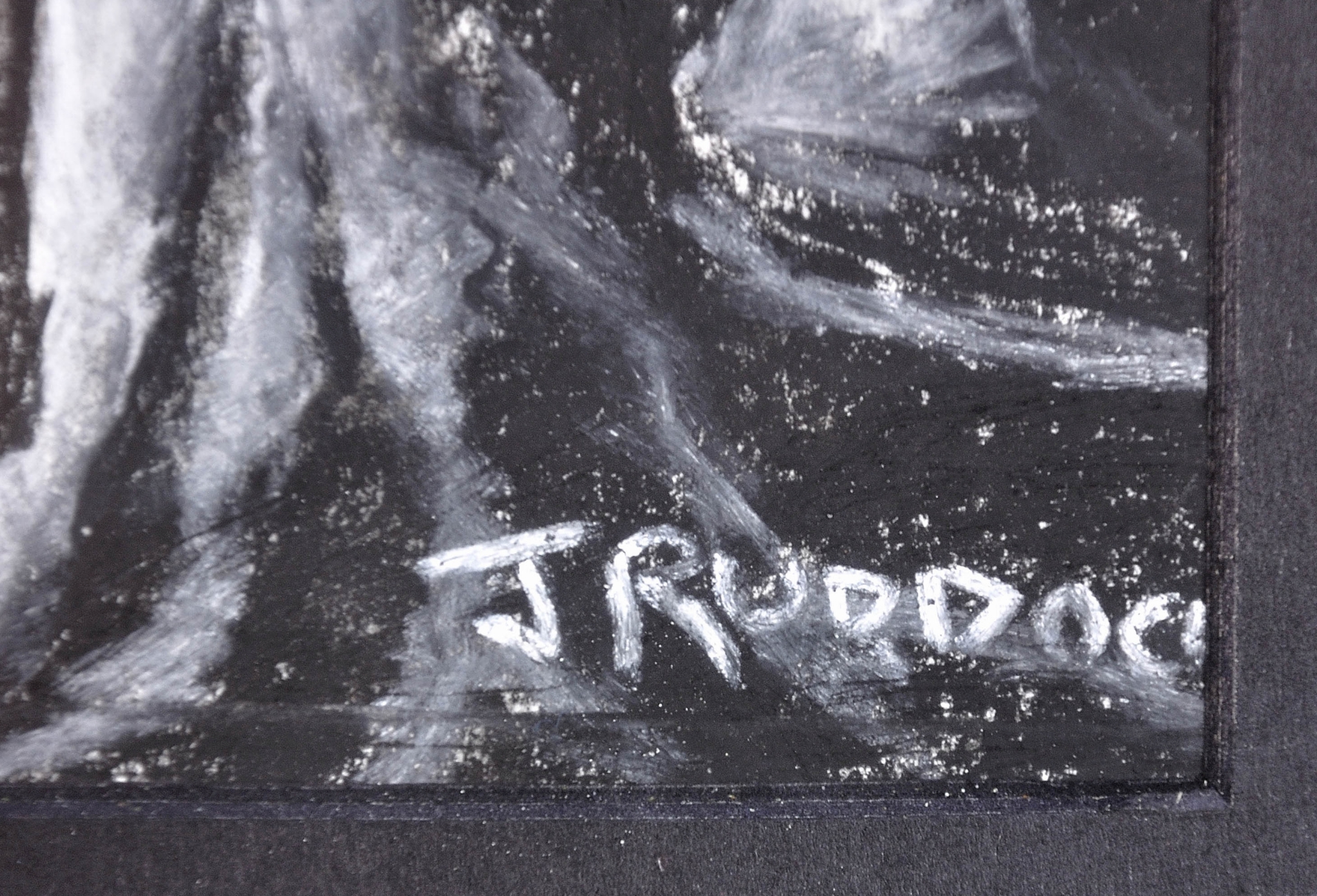 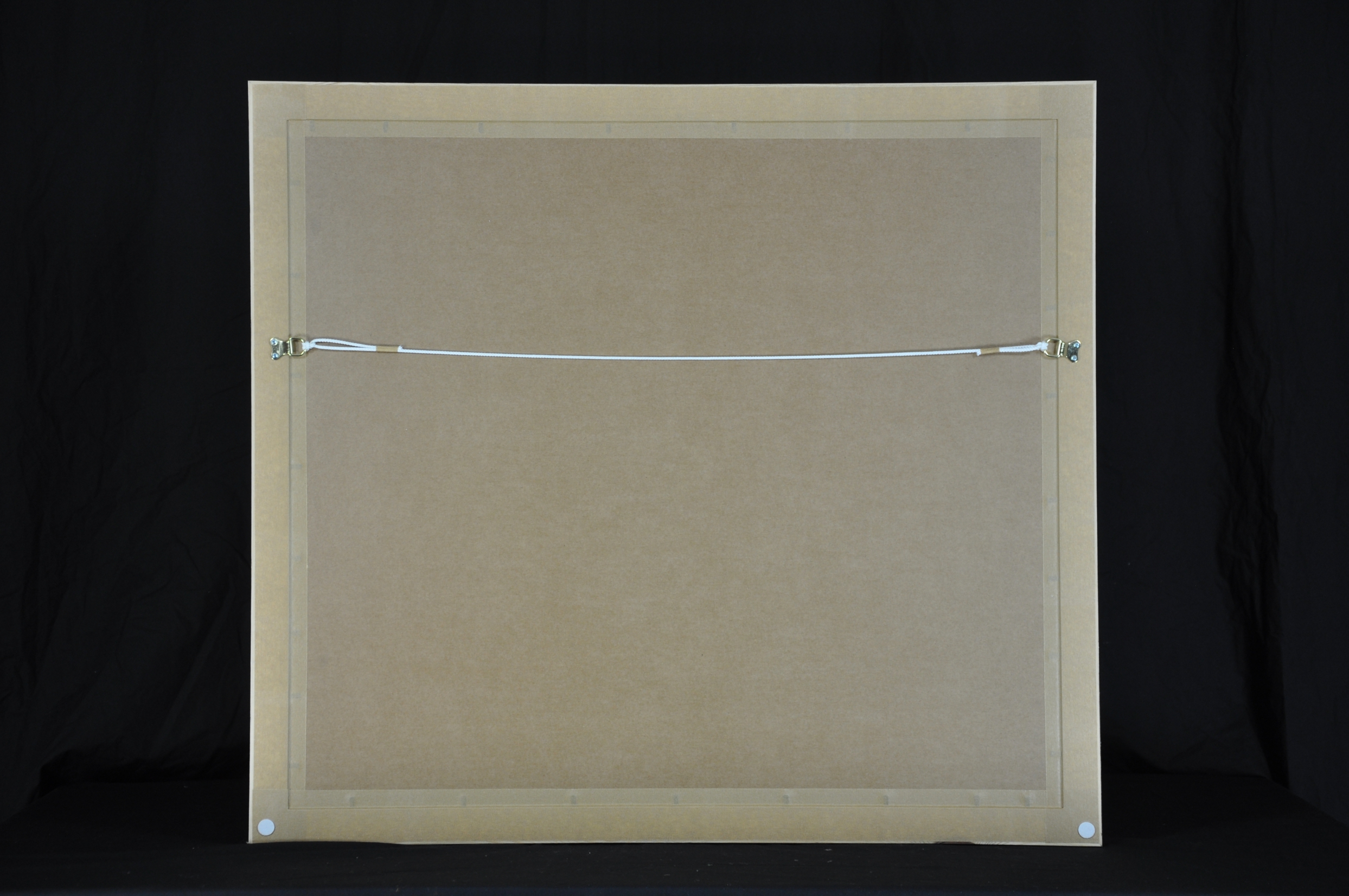 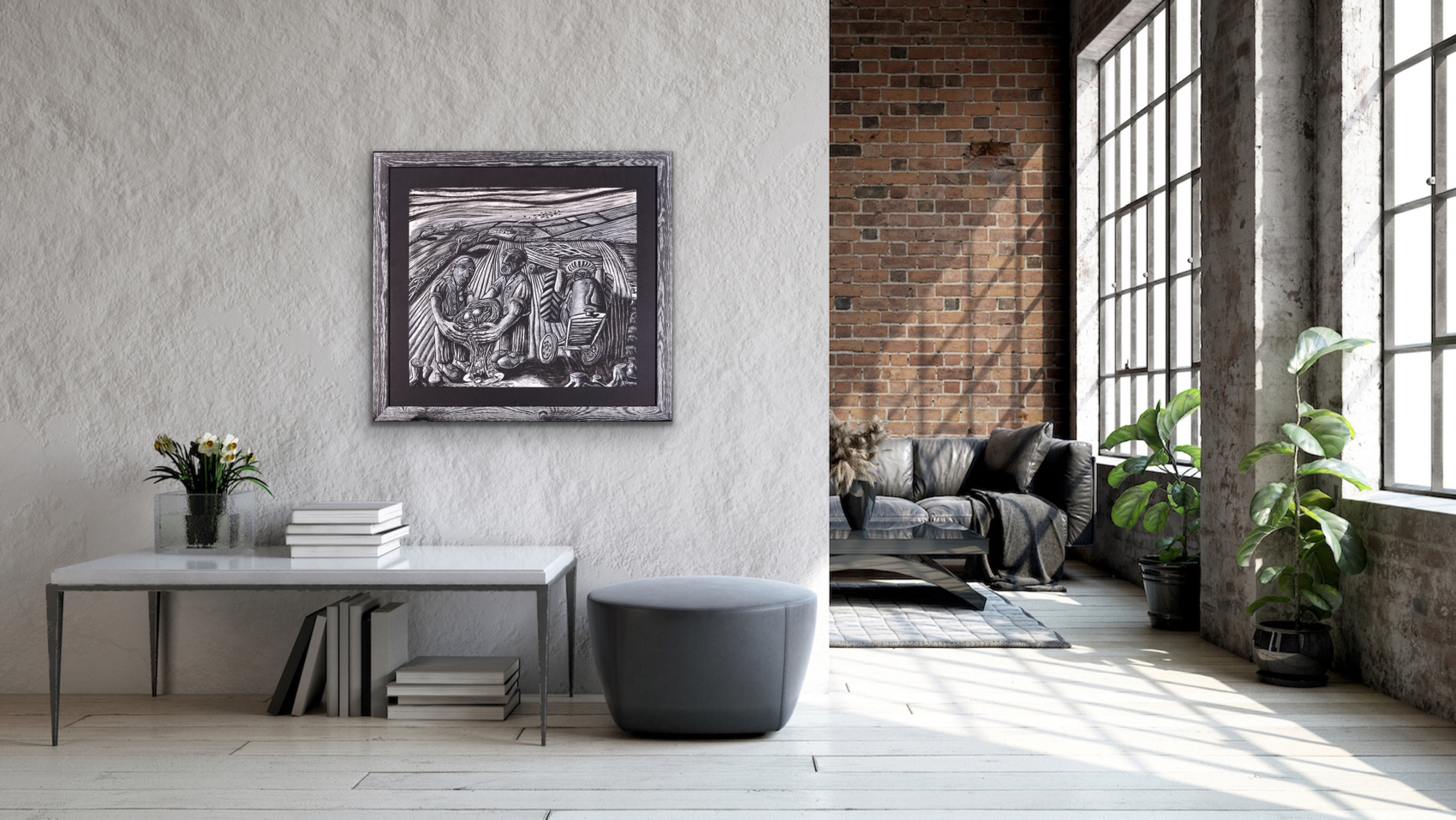 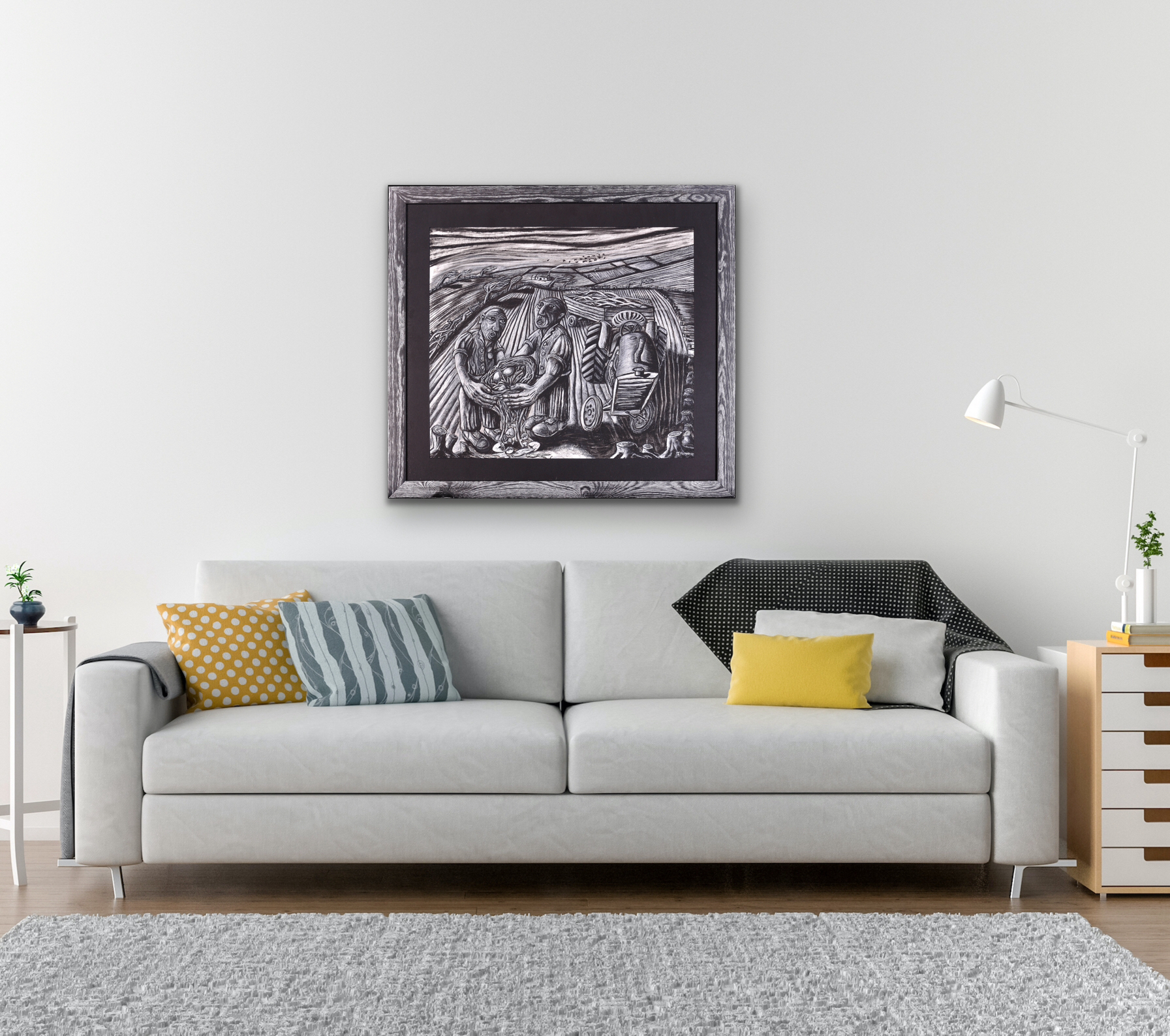 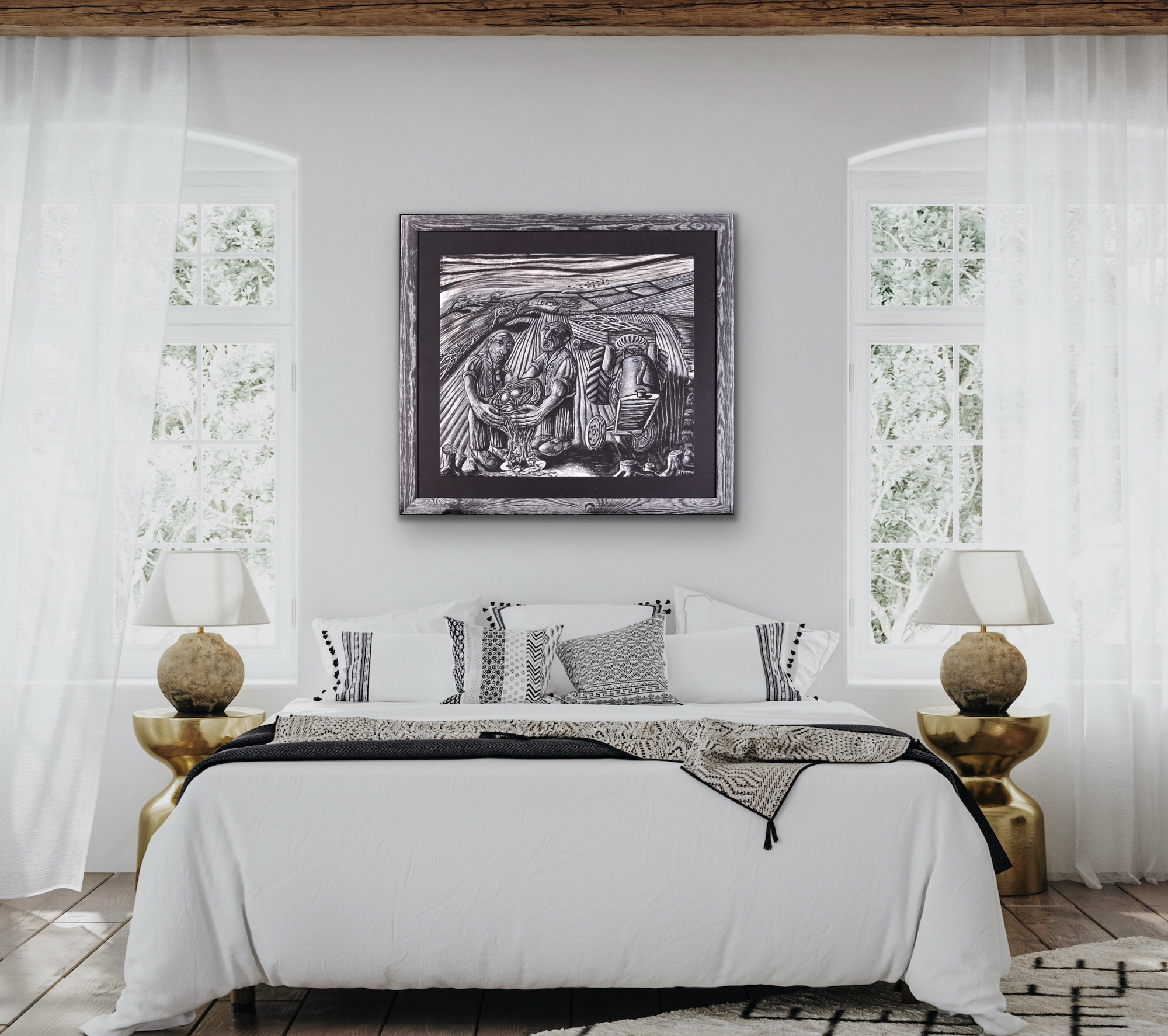 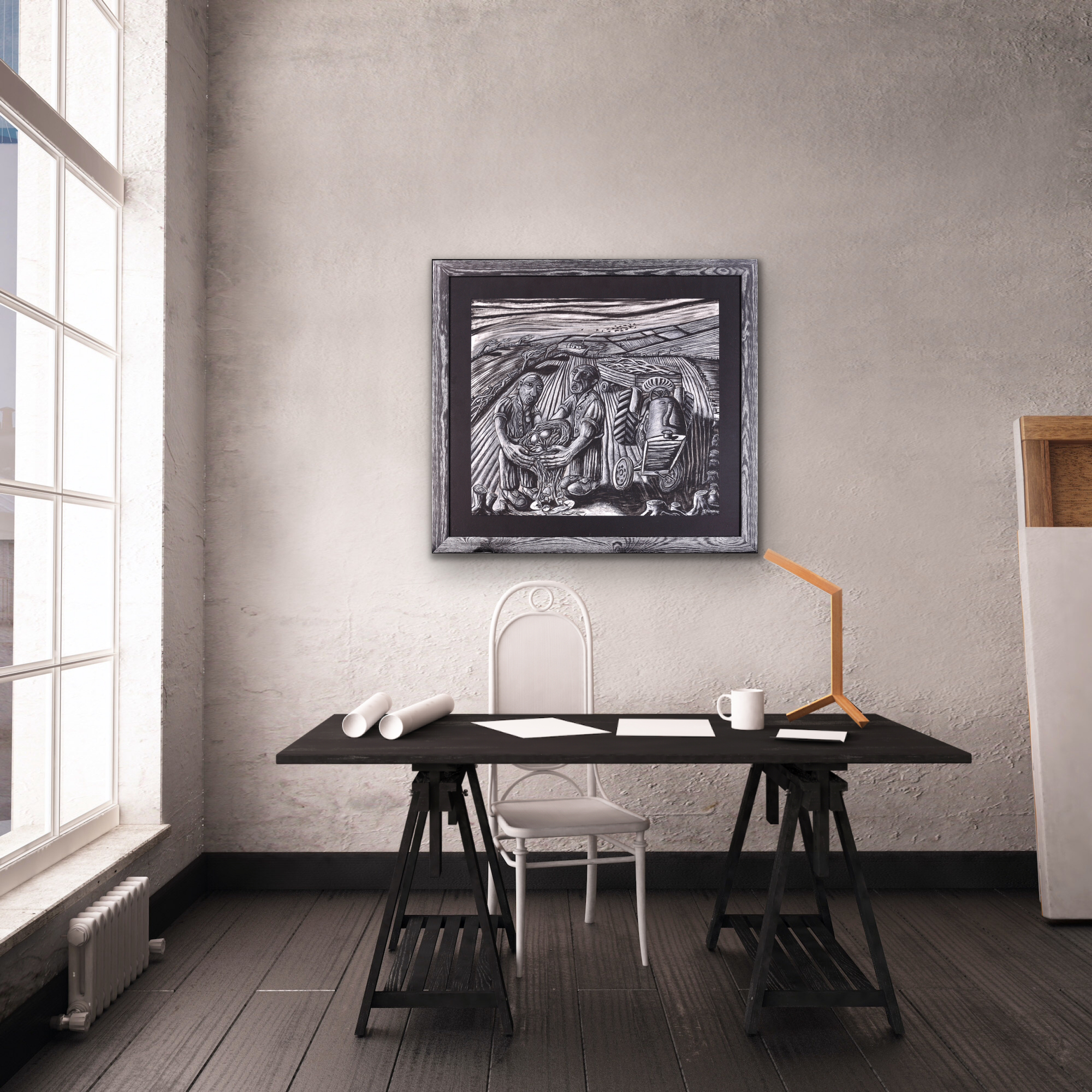 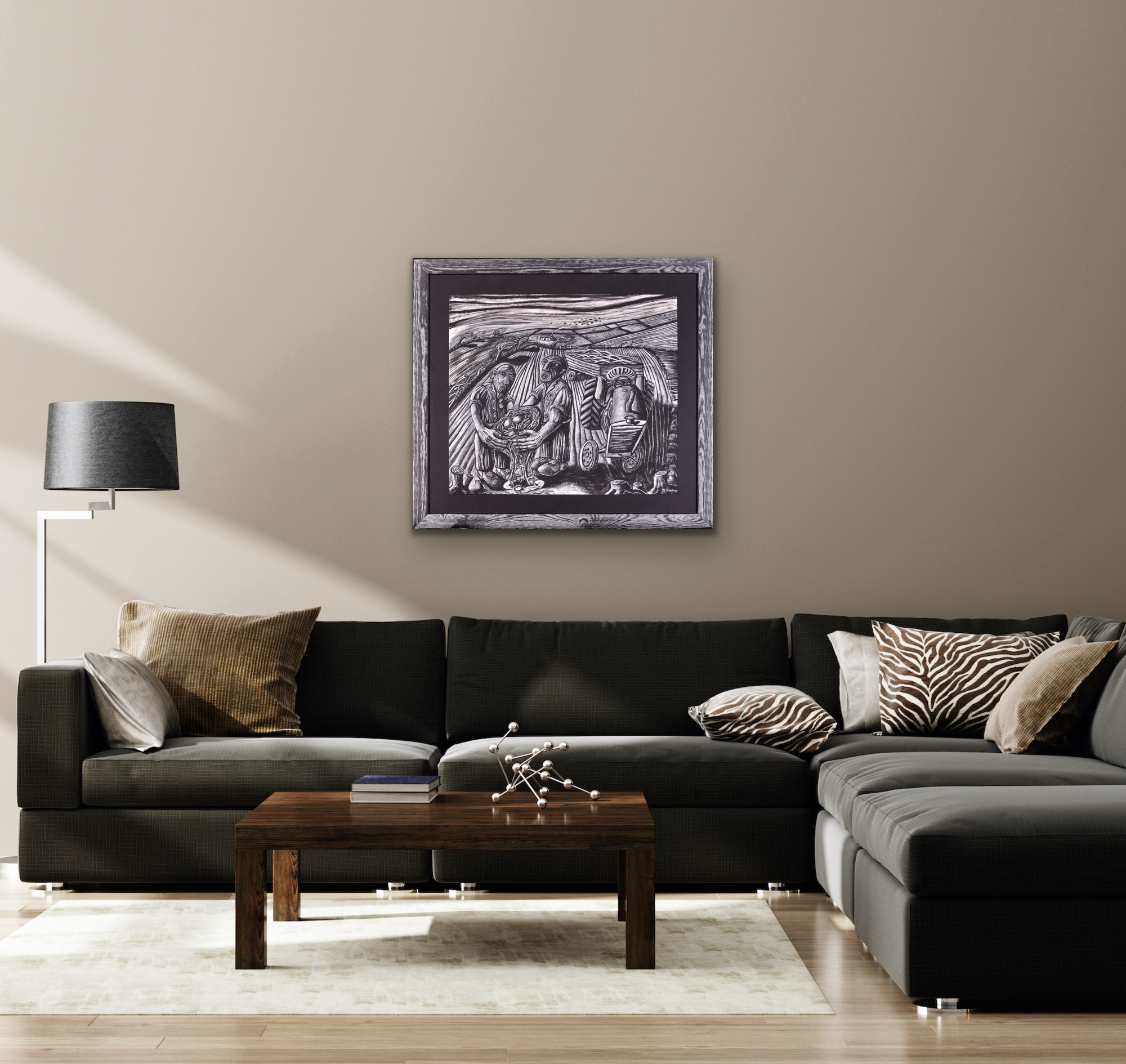 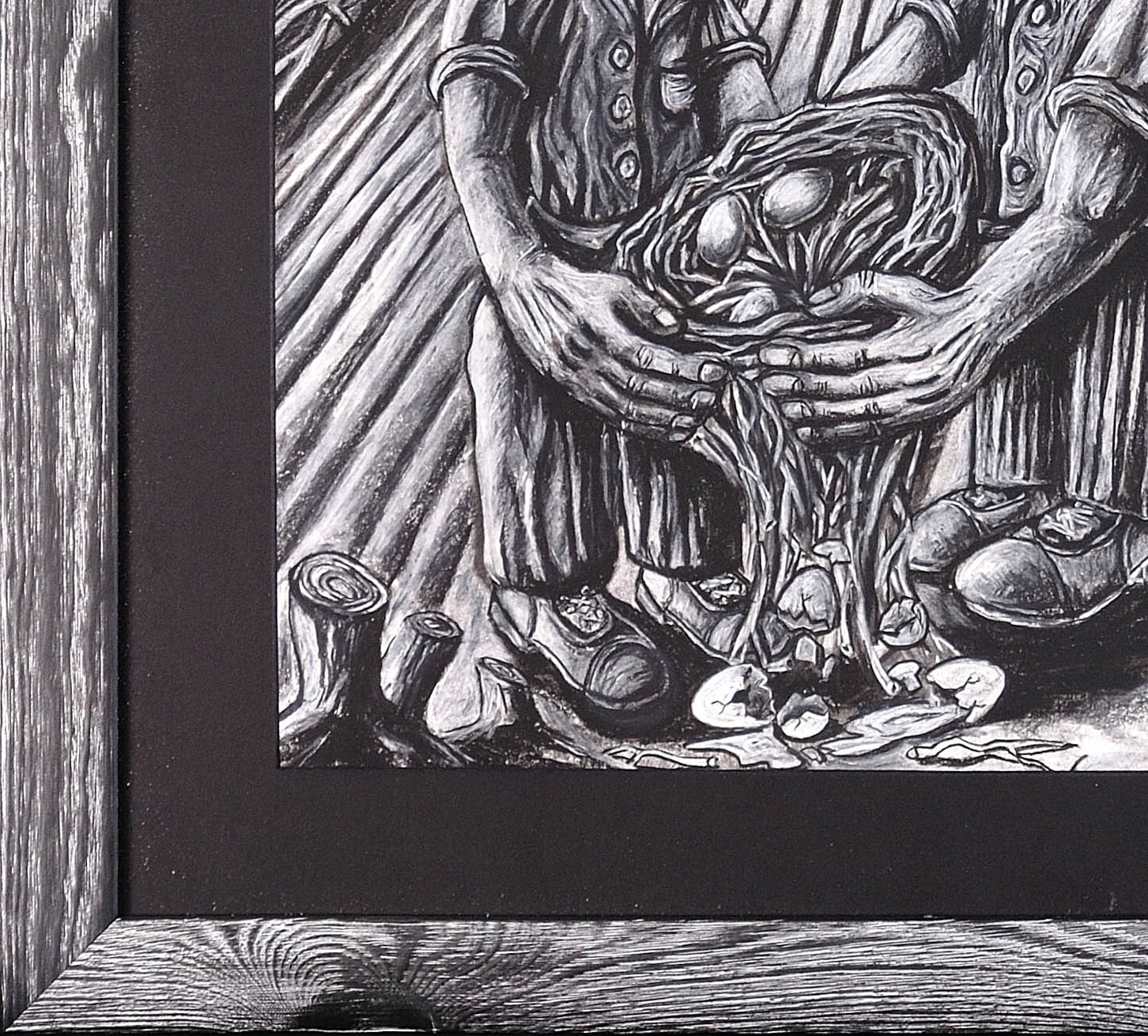 Available for sale from Big Sky Fine Art; this original mixed media artwork by Julian Ruddock; dating from the 1990s.
The work is presented and supplied in a sympathetic contemporary frame (which is shown in these photographs), mounted using conservation materials and behind non-reflective Tru Vue UltraVue® UV70 glass.
This vintage drawing is in very good condition, commensurate with its age. It wants for nothing and is supplied ready to hang and display.
Provenance: In the previous ownership of the artist Mabel Pakenham-Walsh 1937-2013 and then handed back to the artist after her passing.
The artwork is signed lower right.

Currently living and working near Aberystwyth, Ceredigion, on the west coast of Wales, Julian Ruddock is an exceptional British artist with a strong interest in the environment. This interest has found expression through the practice of landscape painting and the production of site-specific sculpture, mapping projects and installation work. He is interested in the production of works that investigate the interaction of natural environment with human histories, in particular the discourse on environmental art based practice and climate change. Indeed, this was the subject of his PhD at Aberystwyth University. Ruddock’s interest is to combine traditional means and modern media to foster awareness, enquiry and expression of the environment.

Between his studies, he has been employed as a Lecturer in Art and Art History at Coleg Ceredigion, previously teaching at Lifelong Learning, and the Aberystwyth School of Art. As a teacher and mentor he has been well respected and highly influential.

Throughout his career Ruddock has also worked as a self-employed artist and has taken part in a great many selected exhibitions throughout the UK, and also Australia.

Ruddock’s PhD was in practice-based Fine Art and the aim of his research was to develop projects that are based on art and science collaboration in relation to climate chance. This has taken him from rivers in Wales to the remote and arid regions of Southern Ethiopia.
The intentions of the art/science collaborations stem from an interest in landscape evolution, human impact on the environment and recognition of the need to communicate climate change research to a wider audience.

Recent years have seen increased collaboration between the sciences and arts, with conferences, galleries and residencies devoted to exploiting the mutual benefits that can arise from mingling the two
Spheres. Ruddock has been an active member of the Visualising Geomorphology Working Group, whose remit is the promote the science of geomorphology through engagement with the arts.

Recently, Ruddock joined a delegation of earth scientist to Ethiopia to record their research on climate change. The work centered around a remote region of Southern Ethiopia where the researchers collected sediment drill cores for analysis close to some of the world’s most important fossil and artefact sites. His role as part of the team was of an artist in residence and his images and film work played an important part in chronicling the work of the project. He also captured fascinating imagery of the local tribes people.

Ruddock said; “My biggest remit is to work with the scientists and get involved with the communication of their findings. The idea behind it all is that scientists are very good at doing the science, obviously, but it is artists who are good at the communication side. The project is looking at how climate might have affected human evolution hundreds of thousands of years ago. They think that there are various factors that
might have caused human change and human evolution at various points in history, and think that climate was a significant part of that.”

Ruddock reflects; “When we talk about climate change in the West we talk about where these effects are going to happen; actually they are happening in the places that didn’t cause the problem in the first place. So these people are getting increased droughts.”

An amazingly talented artist, with sound practical and academic credentials, Julian Ruddock is a man on a mission. His works are unique, and speak from both the head and heart. They are set to become very collectable amongst a generation that is waking up to their message.

This original pastel on paper echoes the artist’s strong environmental credentials. It is a lament for the lost hedgerows, the natural habitat of birds and other wildlife, decimated by modern intensive farming methods. In the foreground are two men, farmers, dressed in shirtsleeves and trousers. Between them they hold a large nest, perhaps the last nest. There are three eggs in the nest, but other eggs have already fallen out and broken, the contents spilling out on the bare earth. These are chicks that will never hatch, birds that will never sing. The men’s hands are disproportionately large, suggesting that these hands have a huge influence. The field behind the farmers is ploughed, but there in nothing growing and its hedges have been replaced by wooden fences. Along one side of the field, and into the foreground we see the thick stumps of trees, cut down by man. There is also a tractor, pulling a trailer, upon which are the stacked branches and trunks of trees, devoid of their leaves. In the distance are more fields, each of them devoid of hedgerows, and the wind whips over them, eroding the earth. A last flock of birds is flying away, into the horizon. There is nothing left here for them. There is a lonely cottage, with smoke coming from the chimney. Our gaze comes back to the men in the foreground, their faces are strained and sad; do they realise what they have done? And is it too late to change their ways? This image has a message for all of us, urging us to consider carefully how we treat our planet, with its finite resources and our wider responsibilities. 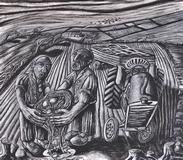