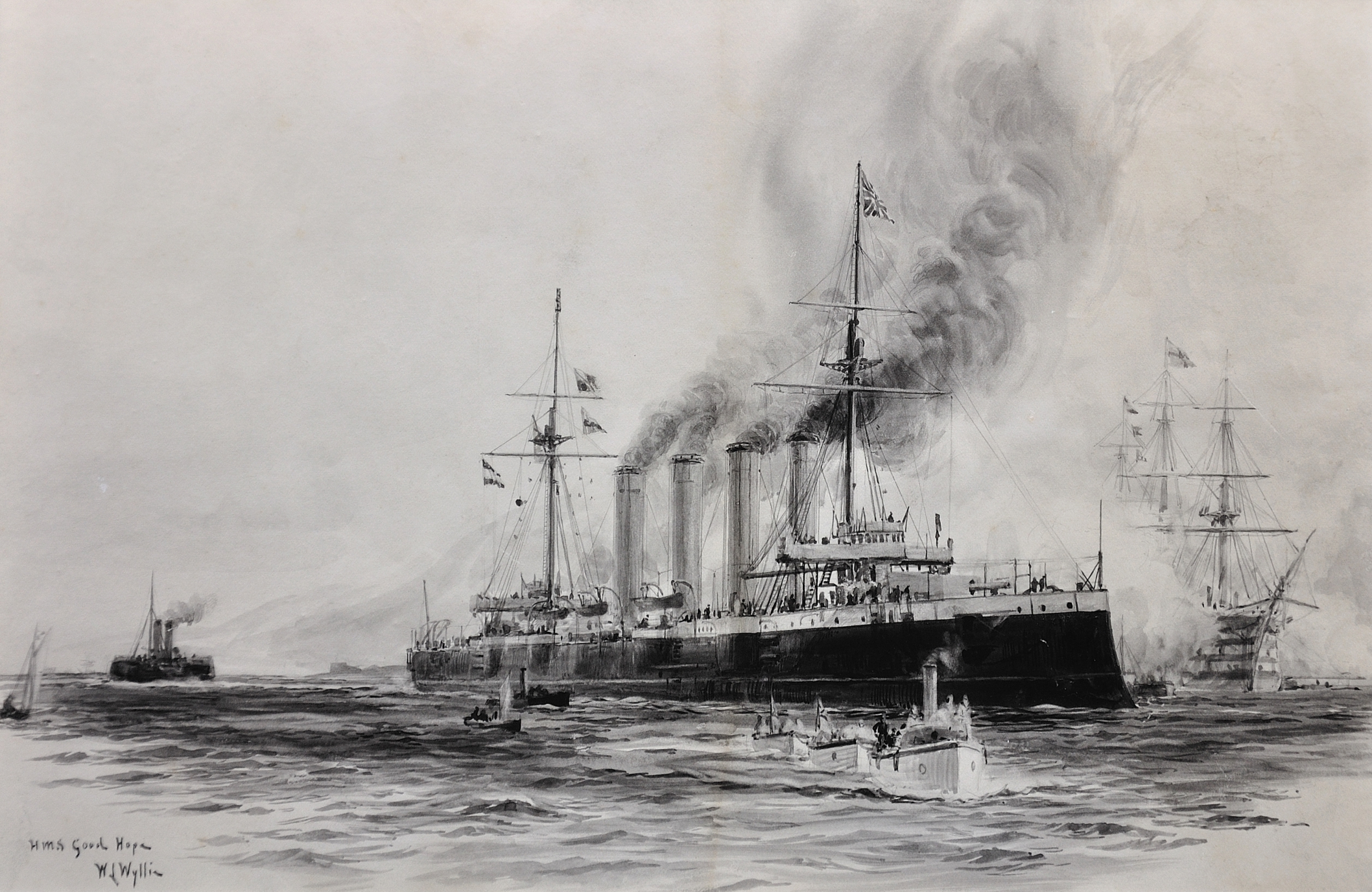 William Wyllie is regarded as Britain’s premier marine artist of the late Victorian and early twentieth century era. His twin loves of painting and sailing made for a lifetime’s work, which earned him huge prestige and respect during his lifetime. Today his work is well known through engravings and reproductions, original works being more rare. His pictures of the Thames Estuary and the shipping of Britain at the height of its Empire are among the most evocative and accurate existing.

William Wyllie was born, in London on 6th July 1851, into an artistic family. His mother was a singer and his father, William Morison Wyllie, was a genre painter of some means and standing. His brother C.W. Wyllie RBA, and his son Harold Wyllie, both became marine artists. The family was rather bohemian and spent their summers at Wimereux on the north coast of France and the rest of the year in their home in London.

Encouraged by his family Wyllie attended Haetherleys School of Art from the age of about 12. Later he studied at the Royal Academy Schools under Edwin Landseer, John Millais and Frederick Leighton. He was also greatly influenced by the work of Turner, whom he particularly admired and it was therefore apt that in 1869 he won the Turner medal for his own landscape painting. As part of his education he also learnt the art of boatmaking, and from his youth was a keen sailor. In 1869 Prince Jerome Napoleon witnessed Wyllie and his brothers rescue the crew of a schooner in distress off the coast of northern France.

Wyllie began his career in London, where he spent most of his time on or near the Thames, recording the life of the great river. He sailed the length of the river from London to the sea, and converted a barge into a studio, generally moored in the Pool of London, from which he worked. He also spent weeks away on sailing and painting trips to northern France and the Dutch canals. Wyllie painted studies of the moon, and of the city of London, but it was his unconventional paintings of the River Thames that made his name.

As a lover of sailing and ships Wyllie also became known for his naval and historical works. For many years he was employed as the marine illustrator for The Graphic and was sent by them to the United States in 1894.

Si Hugh Carson wrote of Wyllie’s skill in drawing boats “He drew them as a seaman would… accurately, affectionately and above all with that deep practical understanding of the fact born of experience, that seamanship is fun but it is also serious.”

During his life Wyllie’s interest and understanding of ships was appreciated; he was a guest of the White Star Company on their new liner Teutonic during important naval manoueuvres, and spent time on several Royal Naval ships, including a stay on the HMS Black Prince.

Wyllie had a full and busy personal life; in 1879 he married Marian Amy Caren and in 1885 they moved to Hoo Lodge in Rochester. They had five sons and two daughters. Whilst living on the Medway in Kent he became the foremost chronicler of the shipping of the lower Thames and Medway. He became marine painter to the Royal Victoria Yatch Club, Ryde

By 1907 the family had he had moved to Tower House at the entrance to Portsmouth Harbour, which they converted from a complex of stores and wharves into a dream house, with a studio right at the water’s edge from which Wyllie could sit and paint the passing ships.

The family became an important part of the social, academic, naval and artistic fabric of Portsmouth; Wyllie was a friend of Lord Baden Powell, at whose request he founded the Portsmouth Sea Scouts Troop. Wyllie was also a founder member of the Portsmouth Sailing Club.

During the Great War Wyllie became a De facto war artist. Two of his sons were killed in the First World War and both have memorials in Portsmouth Cathedral.

Prior to the war Wyllie had been a founder member of the Society of Nautical Research whose primary aims were the restoration of HMS Victory, which was gradually rotting away in Portsmouth Harbour, and the foundation of the National Maritime Museum. After the War HMS Victory was brought into dry dock and the restoration began. This inspired Wyllie to create a large panorama of the Battle of Trafalgar to be on permanent display close by the ship – a project which lasted nine months and culminated in the unveiling of the piece by George V. It is now in the Royal Naval Museum at Portsmouth. Later, Wyllie discovered in a Chatham Dockyard store the original battle-torn top sail carried by the Victory at Trafalgar- this is now also on permanent display in the Royal Naval Museum.

Wyllie continued to paint throughout his life. He was primarily a watercolour artist, but he also painted in oils, and was an accomplished etcher. He wrote a couple of books himself and illustrated several more. He also made posters for the Orient Company

Wyllie exhibited prolifically, some 201 works, during his lifetime, including regular exhibits at the Royal Academy from 1886, and at Suffolk Street, the New Water Colour Society and Grosvenor Gallery. Today his works are in the Tate, the National Maritime Museum and other major galleries.

Wyllie died in London on 6.4.1931, having suffered a heart attack. At the time of his death he was the country’s most famous marine artist. His funeral was held in Portsmouth Cathedral after which his coffin was carried to Point and placed abroad a cutter from HMS Nelson, which transported it to St. Mary’s Church in the grounds of Portchester Castle where Wyllie is buried alongside his wife and daughters

The work featured here is of HMS Good Hope, a 14,100-ton Drake-class armoured cruiser of the Royal Navy. She was completed at Portsmouth in 1901 and was active in the First World War. Tragically, she was sunk by German ships during the Battle of Coronel on 1st November 1914 off the Chilean coast, with the loss of her entire compliment of 900 men. 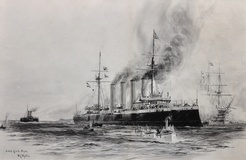