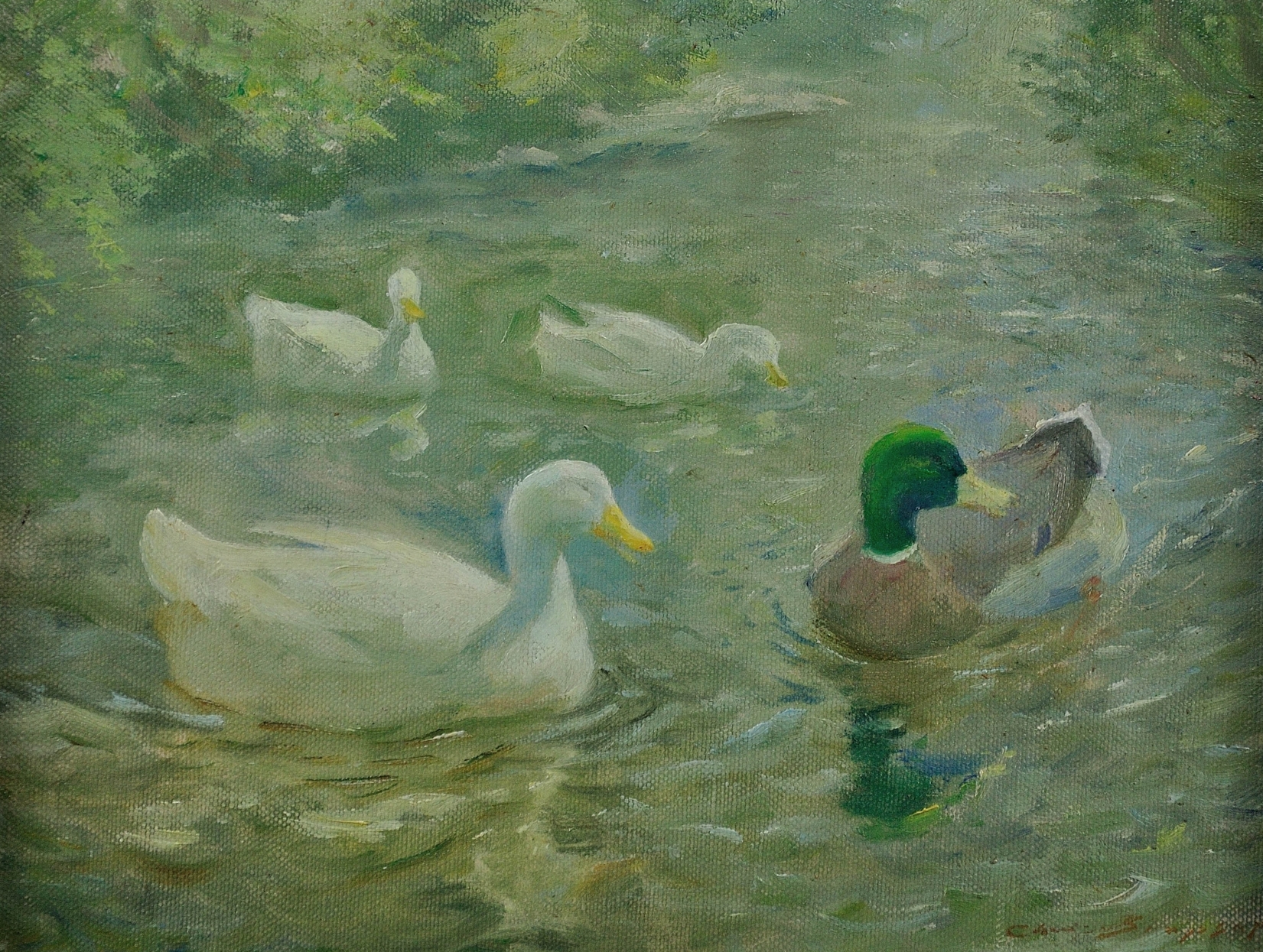 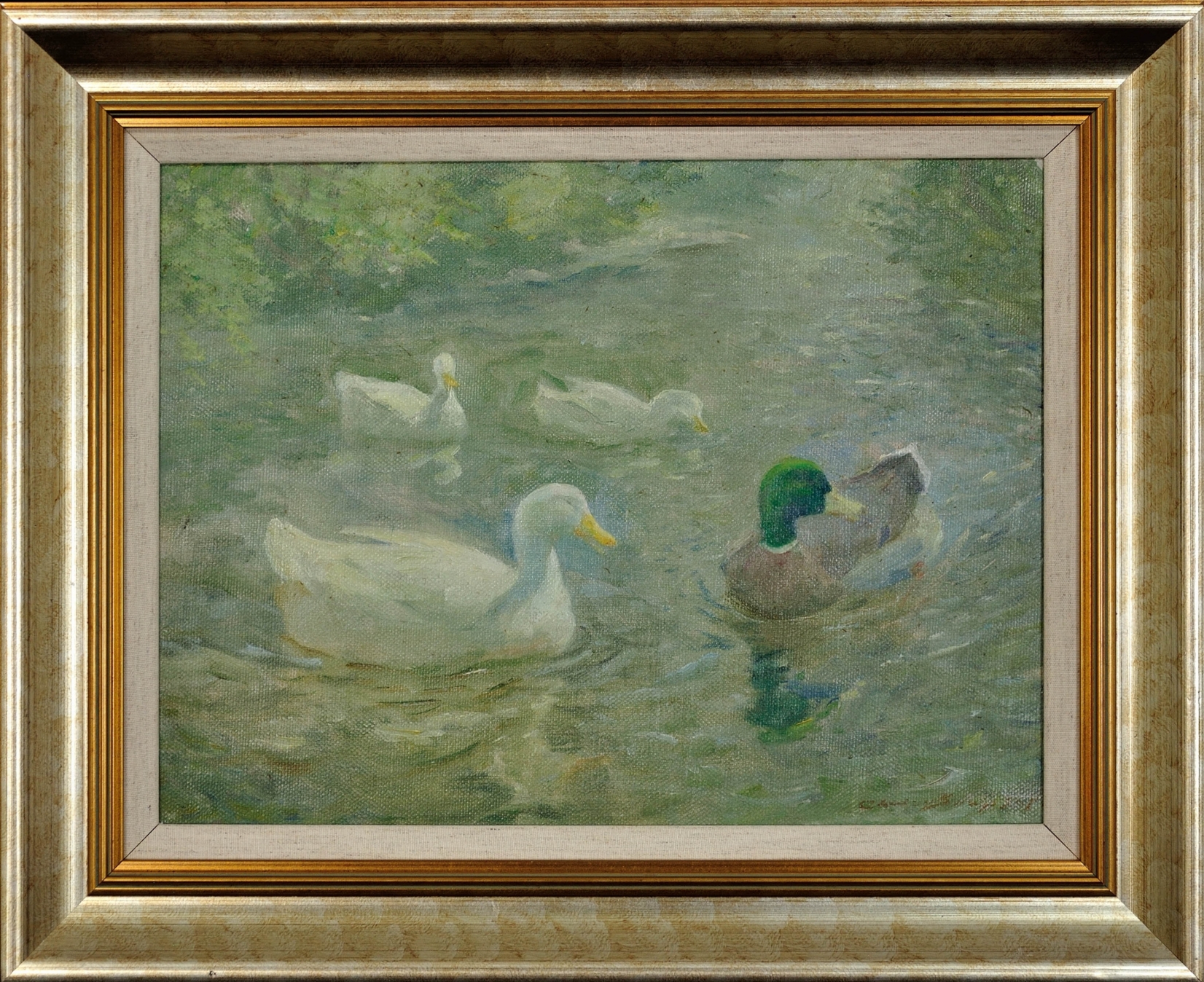 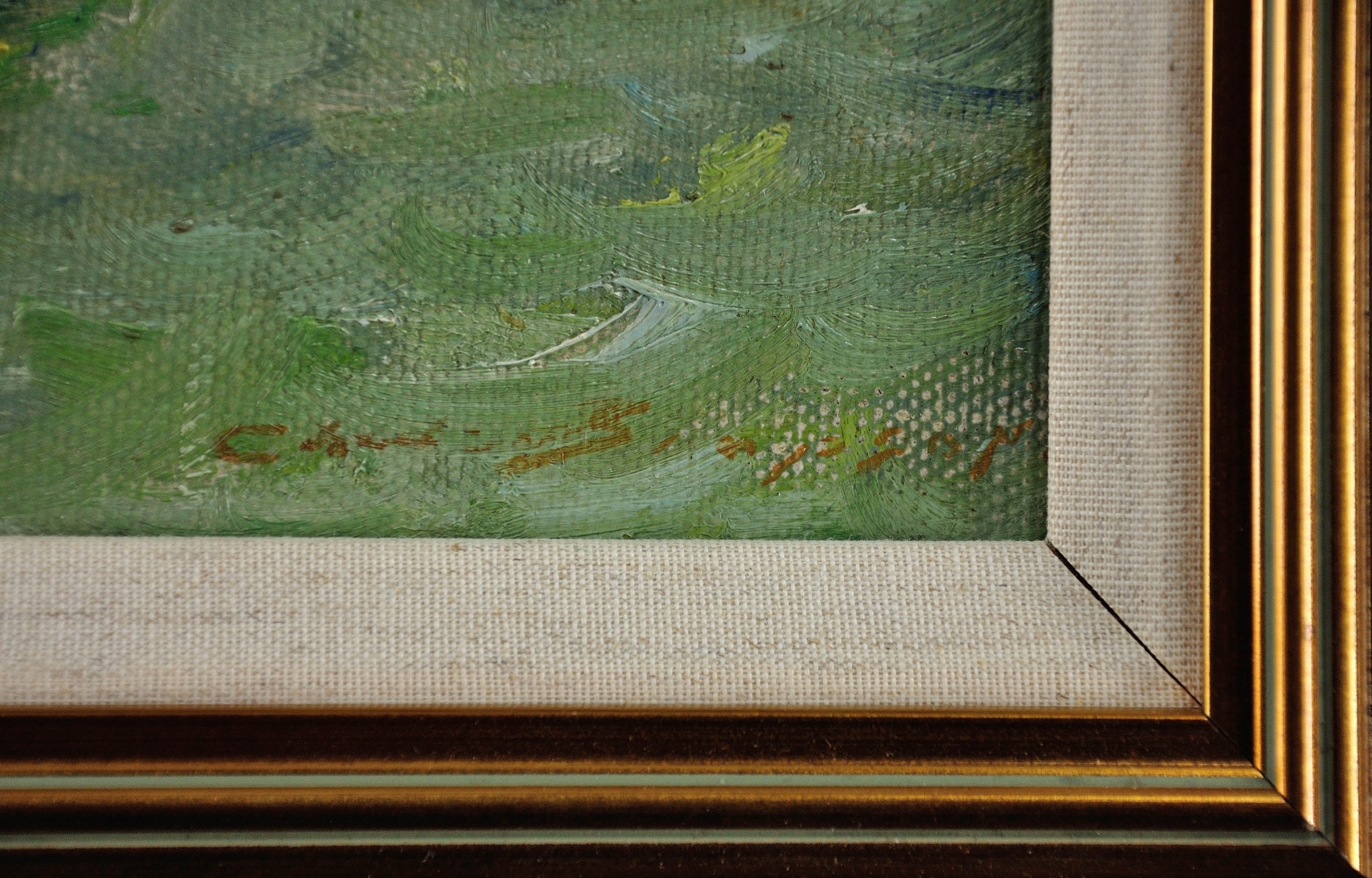 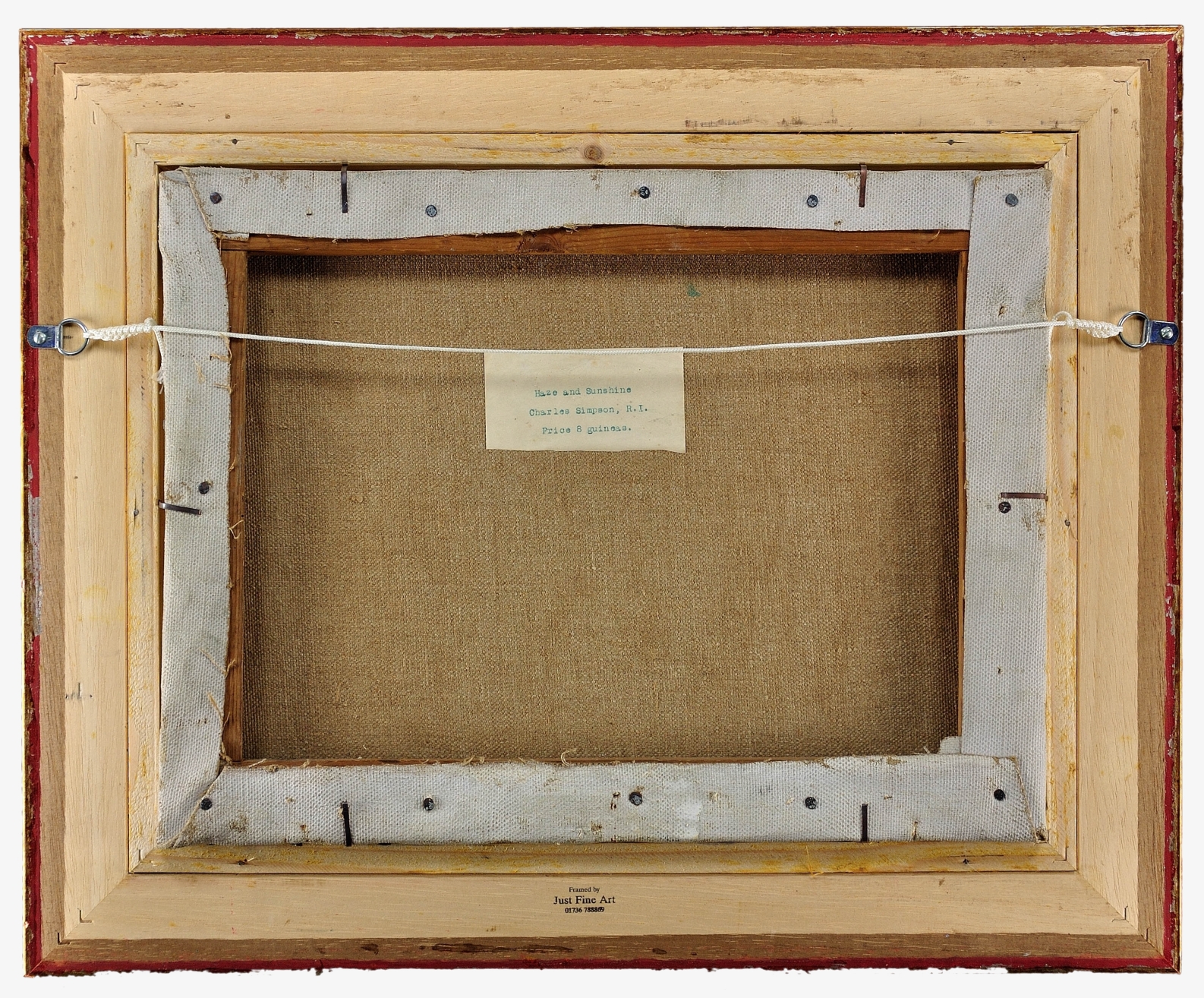 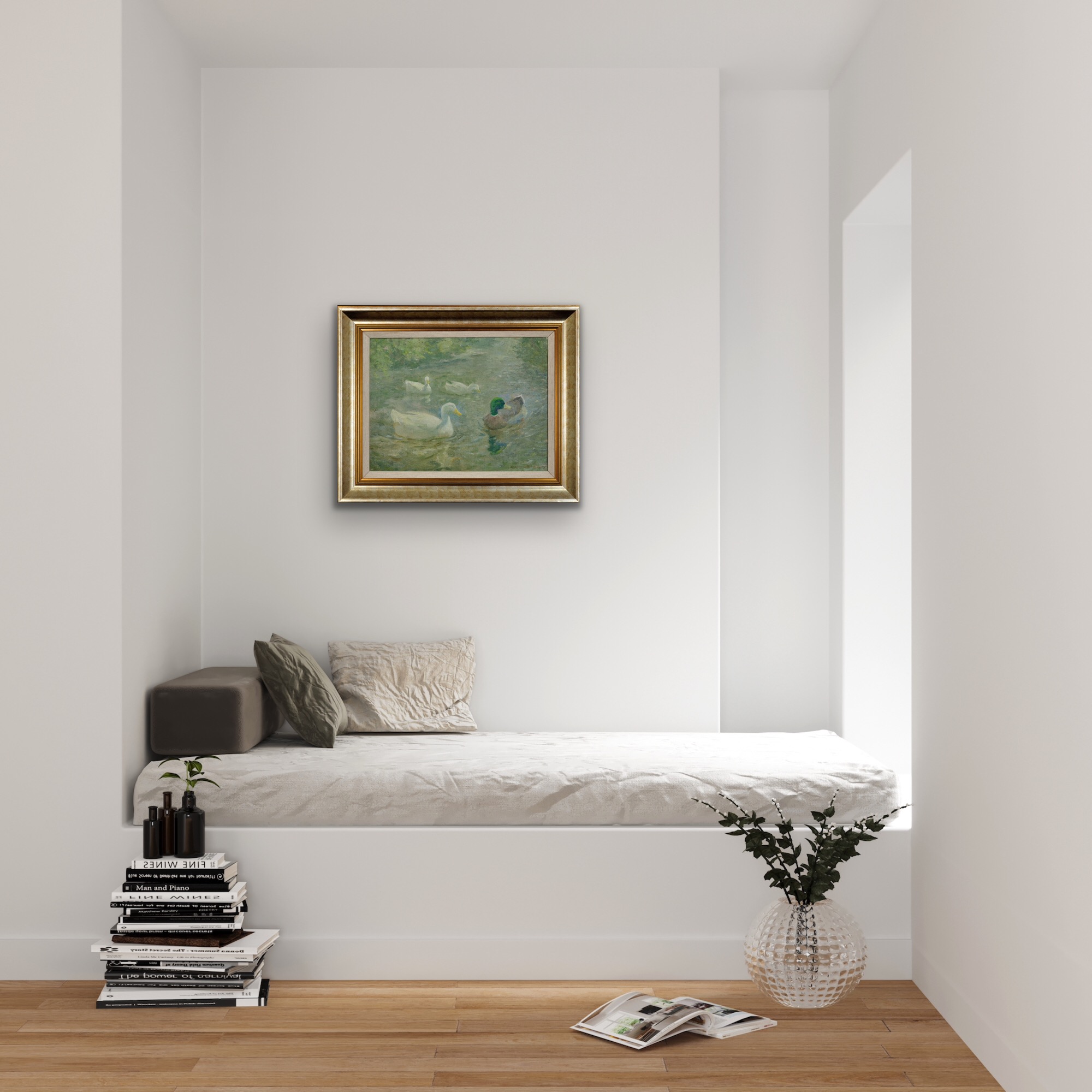 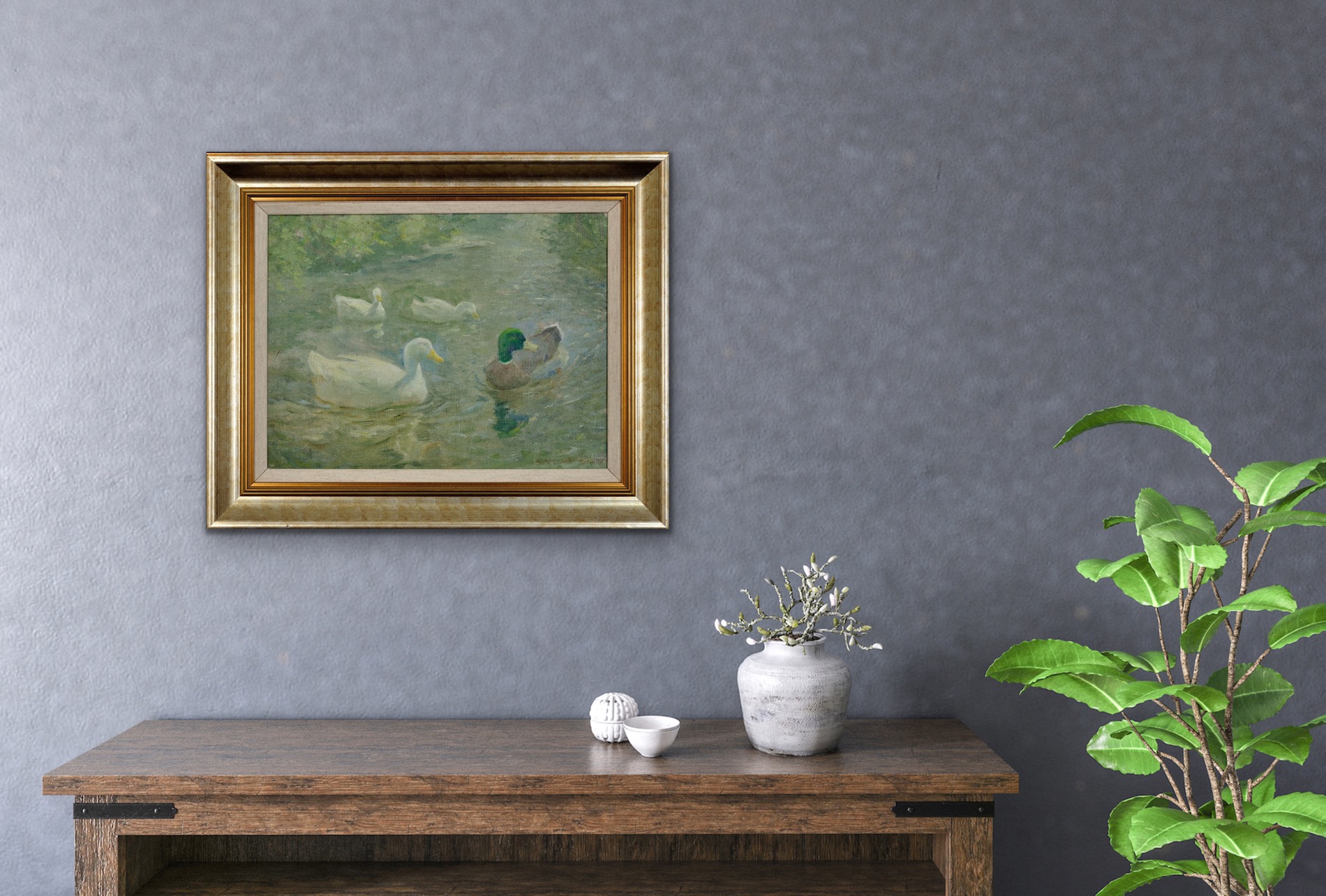 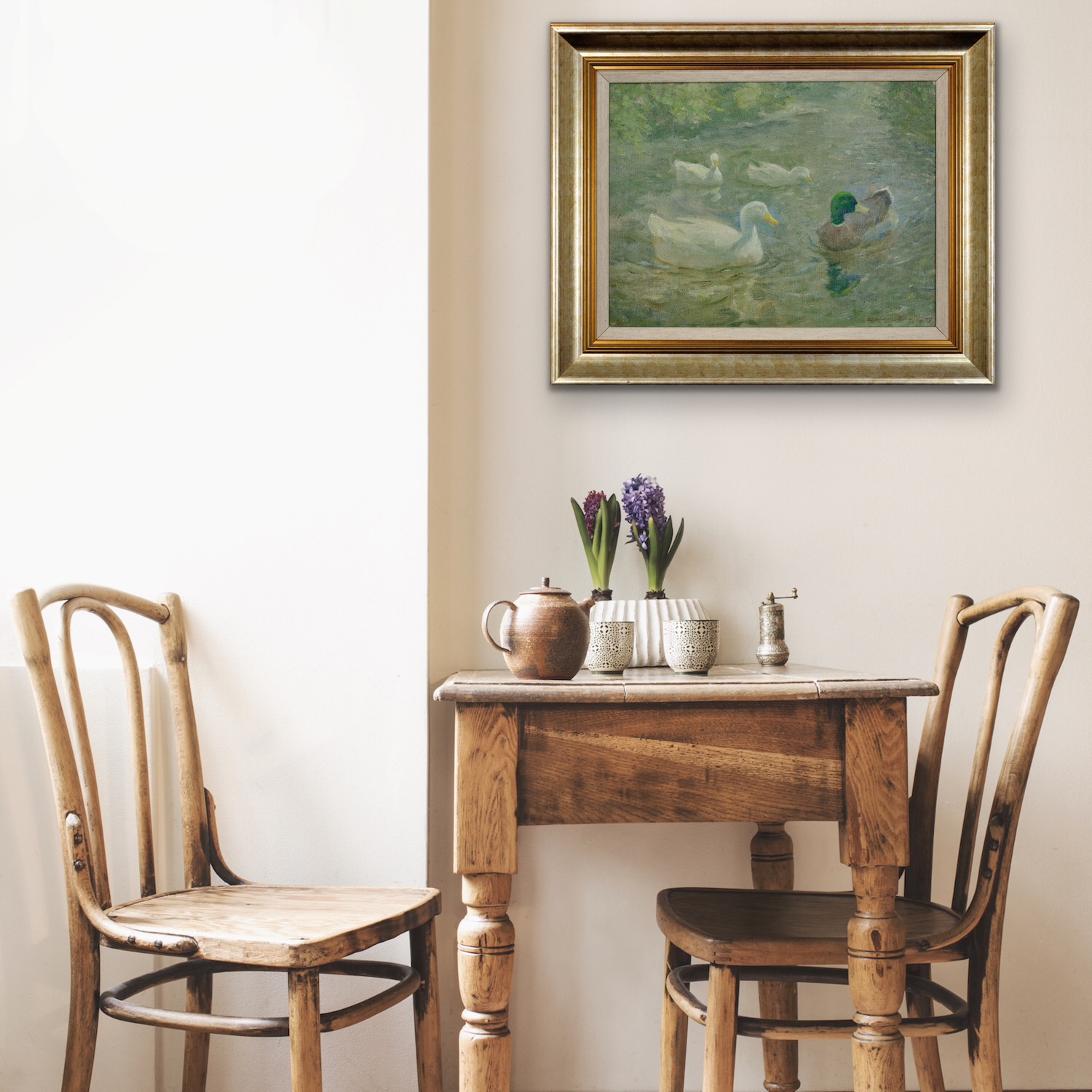 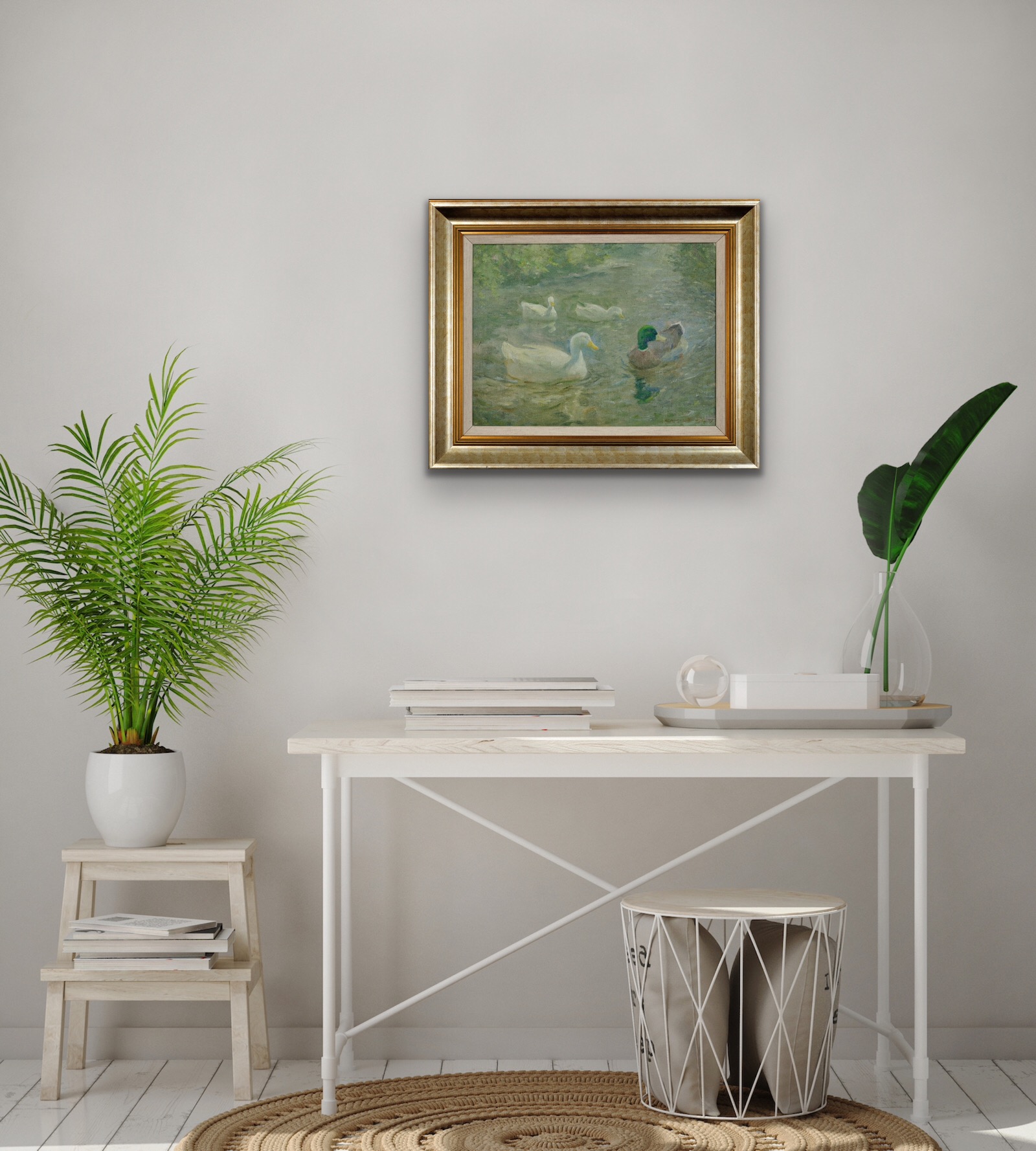 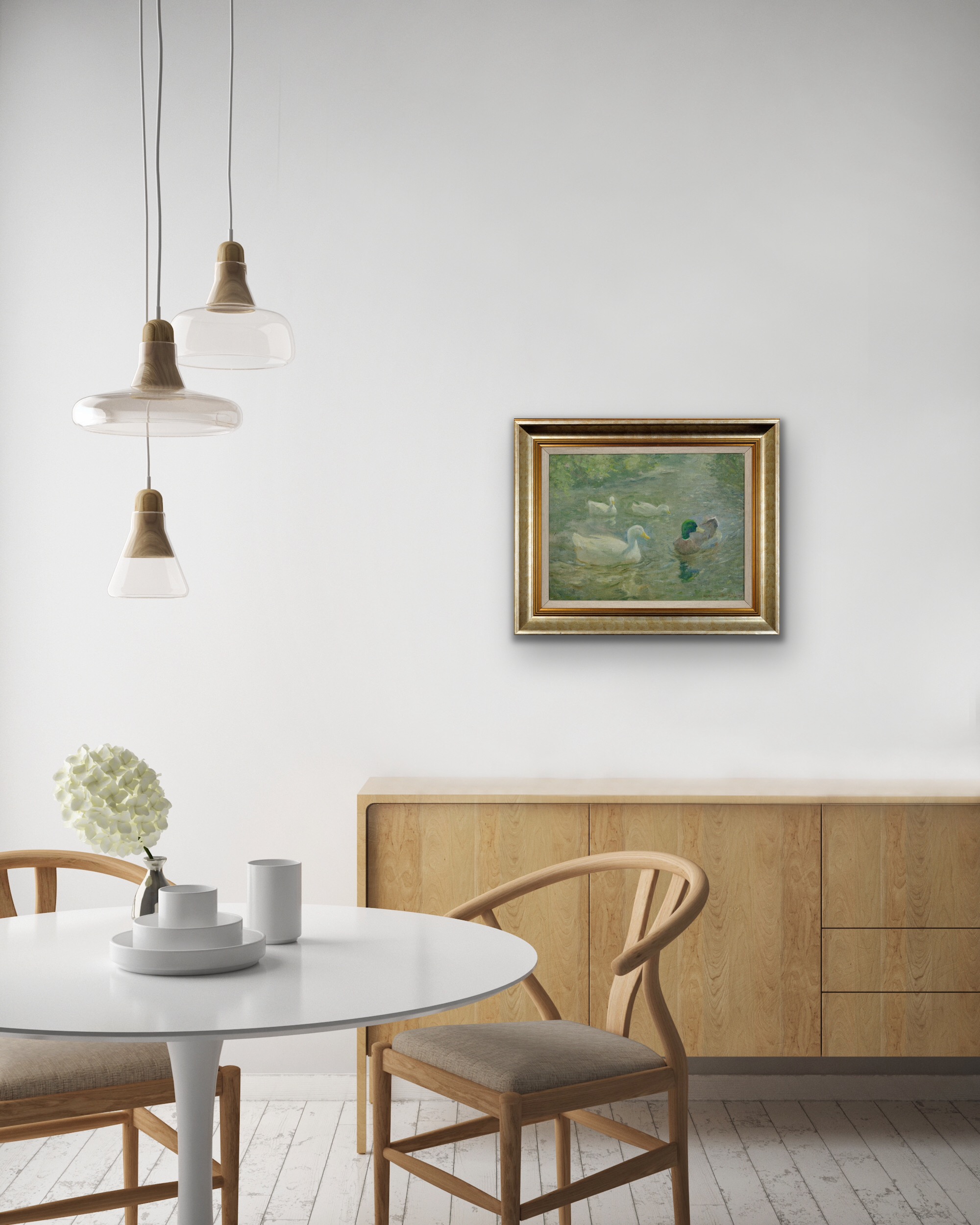 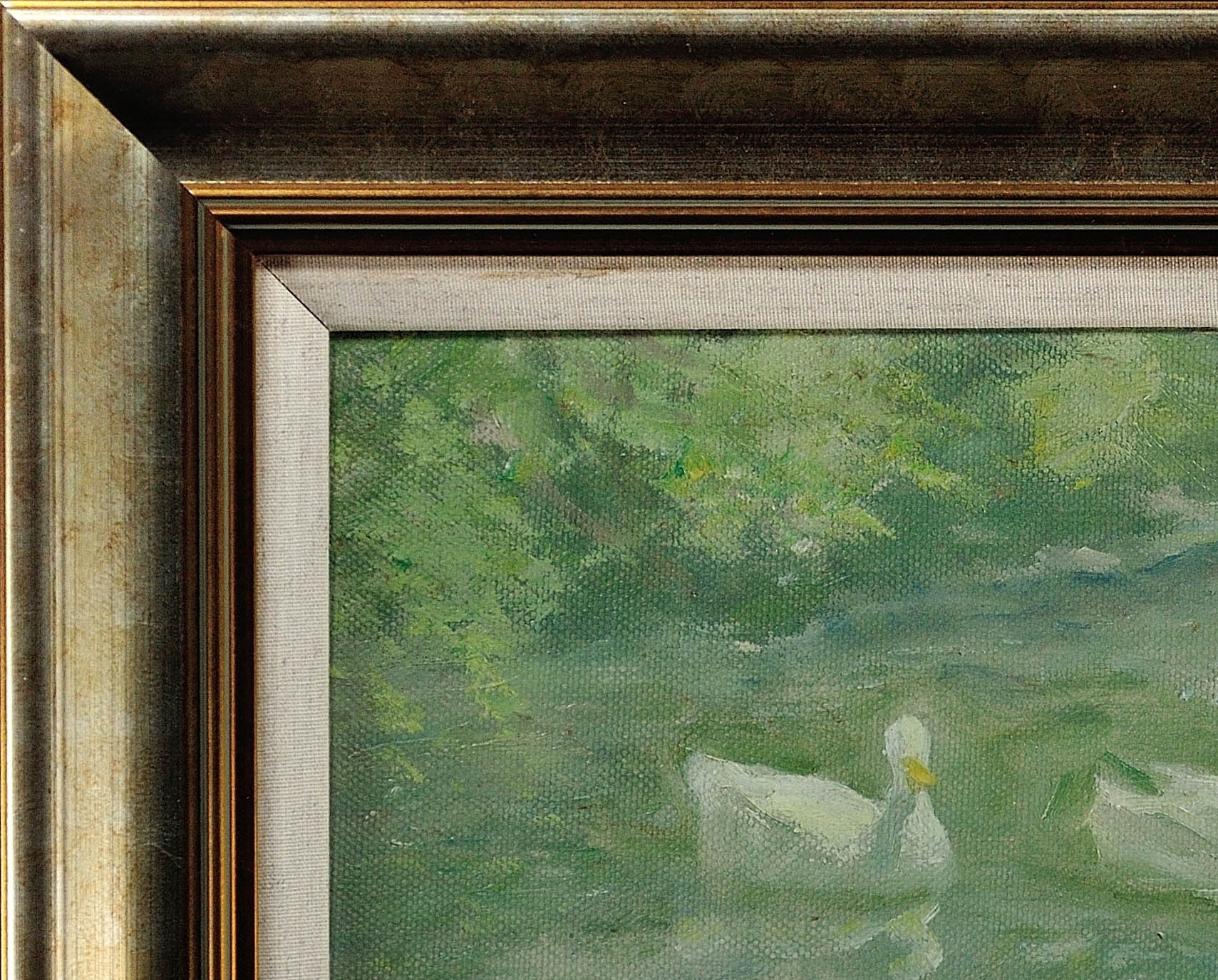 Available for sale from Big Sky Fine Art is this original oil painting by Charles Simpson dating from the 1940s.
The painting is presented and supplied in a wood frame that dates from the 1990s (which is shown in these photographs).
The painted surface and the canvas have benefitted from cleaning and conservation, which took place in previous ownership around the period of the framing.
This vintage painting is in very good condition, commensurate with its age. It wants for nothing and is supplied ready to hang and display.
The painting is signed lower right.
Provenance: From the personal collection of Ann (1946 - 2000) and Jonathan Grimble (1942 - 2021). Gallerist and art dealer working in St Ives and Marazion, Cornwall.

Charles Walter Simpson, known as Walter, was a leading figure in the Newlyn and St Ives art colonies in the early part of the twentieth century. He is perhaps best known in America for his horse paintings but is also widely acclaimed for his mastery of birds. It has been said that as a painter of wildfowl Simpson can have few rivals. He worked in oils, watercolours and tempera.
Walter was born at Camberley on 8th May 1855. His mother was Leonora (nee Devas) and his father was Major-General Charles Rudyard Simpson of the Lincolnshire Regiment. Initially Walter was educated by a private tutor, and he later attended the Herkomer School at Bushey.
As a youngster Walter was destined for a military career. However, this was prevented by a riding accident which affected both his hearing and sight. He had a considerable talent for drawing and determined to become an artist instead. Walter was initially largely self-taught, but then received guidance from family friends such as G.F. Watts and H.W.B. Davis, RA. He later studied for a short time under the renowned animal artist Lucy Kemp-Welch at Bishley, then with Sir Alfred Munnings, with whom he developed a life-long friendship, at Swainsthorpe. Munnings encouraged him to visit Cornwall, where he studied under Stanhope Forbes RA in Newlyn. Simpson’s first home in West Cornwall was Penzer House in Newlyn, where he was living in 1908. Finally, Simpson completed his studies at the Academie Julien in Paris in 1910.

On his return from Paris, Simpson moved to Cornwall again and became engaged to fellow artist Ruth Alison just a couple of days after first meeting her. They were married in 1913, living first in Newlyn and then in Lamorna at “Brodriggy”. They had a daughter, Leonora, born in 1914. In 1916 Simpson and his family moved to St. Ives to set up their own School of Painting, which they ran from numbers 1 and 2 Piazza Studios. During this period Simpson dominated the St. Ives art scene. The family moved back to London in 1924 but returned to Cornwall in 1931. Altogether, they moved between West Cornwall and London eleven times.
From his studio in Cornwall Simpson painted in earnest, often on a grand scale, producing wonderful large decorative canvases, specialising in wild ducks, gulls and other sea birds. He had a reputation as an outstanding animal and bird painter. Paget described Charles Simpson in 1945 as “undoubtedly the best bird painter living. He alone, of all artists past and present, can make his birds appear out of their backgrounds as one approaches them, or the light is increased as in nature…”. Simpson relished painting en plein air and Laura Knight commented, "He was so prodigal with paint, he could be traced by the colour left on the bushes!".
Simpson first exhibited at the Royal Academy in 1906, initially painting mainly non-sporting subjects. From then on, he was a regular contributor to the Royal Academy exhibitions. It was not until 1924, when a rodeo was held at Wembley during which he worked in the ring and produced a book call El Rodeo, that he turned to sporting painting. From then on, his sporting subjects include flat racing, steeplechasing, hunting, polo, fencing, carriage-driving, show jumping and almost any other sport undertaken on horseback. He painted many pictures of the Derby, Grand National and other sports meetings. Many of his hunting paintings were reproduced in Country Life magazine.

As well as exhibiting at the Royal Academy Simpson also exhibited at the Royal Institute and the Paris Salon, where he won a Silver Medal in 1923. He went on to win Gold Medals at the San Francisco International Exhibition of 1914 and the VIII Olympiad at Paris in 1924.

Simpson’s busy life of painting and teaching also extended to writing and illustrating books; “A Pastorale”, was published in a limited edition from his home in St. Ives, Cornwall, followed by “Leicestershire and its Hunts”, “The Harboro’ Country”, “Animal and Bird Painting” and “The Fields of Home”; he illustrated many other books.

During the Second World War Simpson worked on the land in Dorset, moving to Alverton in the Penzance area on his return to Cornwall. Simpson continued to play an important role in the Lamorna area and in the mid-1950s he helped to prevent the re-development of the Valley. A Royal Academy exhibition of his work was sent on tour of Municipal Galleries in 1956-68. Sadly, after the death of his wife Ruth in 1964 he never painted again.
Simpson died in Penzance on 3rd October 1971. A collection of his unpublished letters and papers is now held by the World Council of Anthropological Associations, and a full biography of the artist by John Branfield was published in 2005 by Samson & Co, to coincide with a major retrospective exhibition at Penlee House Gallery and Museum.
Today, his work is represented in a large number of public collections, including the Victoria and Albert Museum. His works can also be found in the major art galleries of Derby, Doncaster, Newcastle, Truro, Plymouth, Penzance, Sheffield, Bournemouth, Blackpool, Gateshead, Newport, Windsor and Paisley. He also has works in Christchurch and Dunedin Galleries, New Zealand.

One of Simpson’s masterpieces was “The Stream at Clapper Mill, Lamorna”, (Newport Art Gallery) which depicted one of his favourite subjects, the ducks on the stream at Lamorna. His 1945 oil painting “Ducks on the Water” was a study for this piece. The painting now offered by Big Sky Fine Art here is another example of the subject and clearly painted by an artist with a mastery of his subject. It is painted with a light touch, depicting four ducks on the water; three are pure white whilst the fourth is obviously a drake with his distinctive green head and darker grey plumage. All four have yellow beaks. What is captured so effortlessly is the movement of the ducks and the play of light upon the water. The effect of sunshine and haze on the ripples that brings to mind the simple timeless pleasure of watching the ducks on a summer’s afternoon. 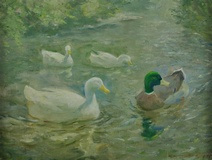