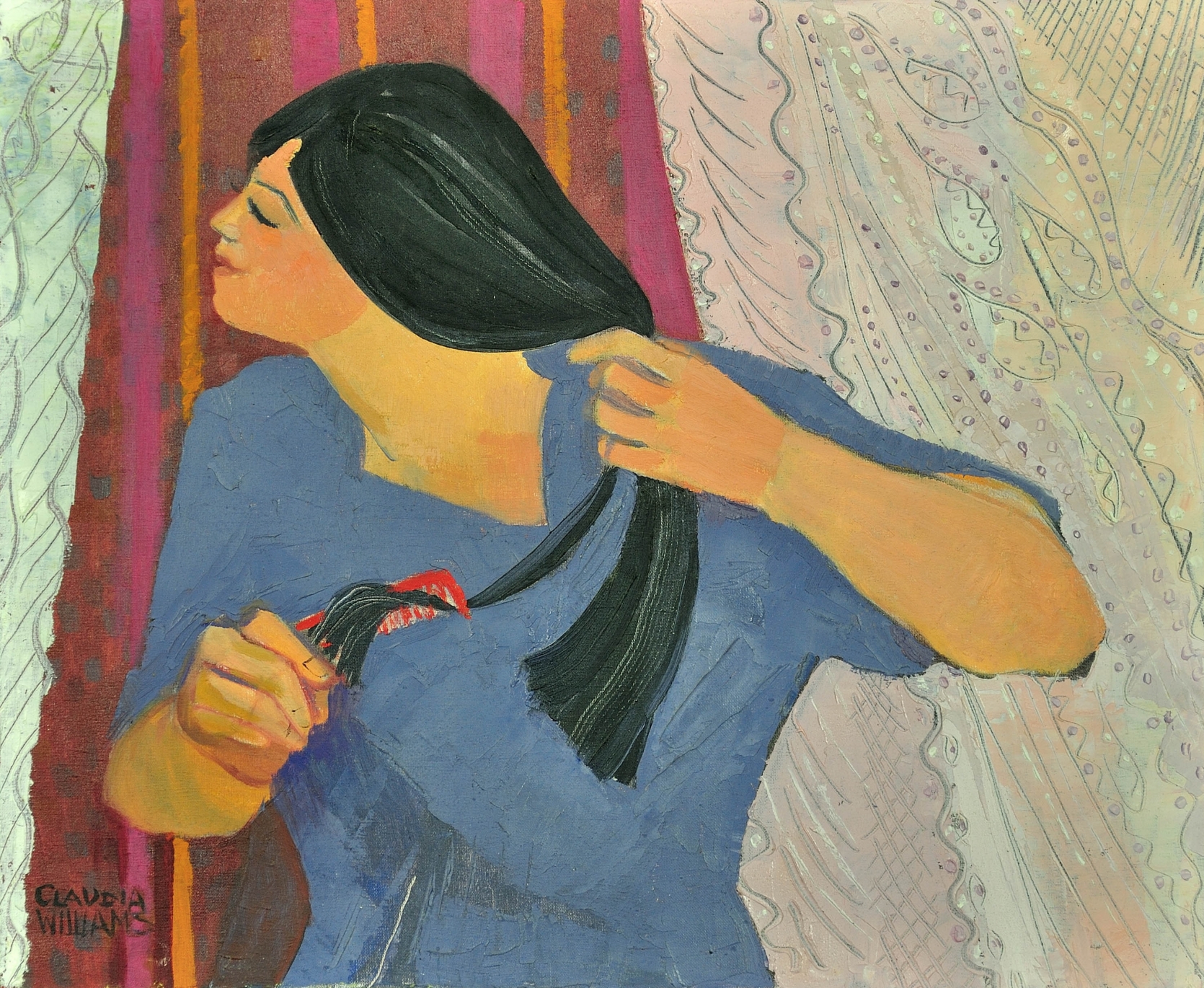 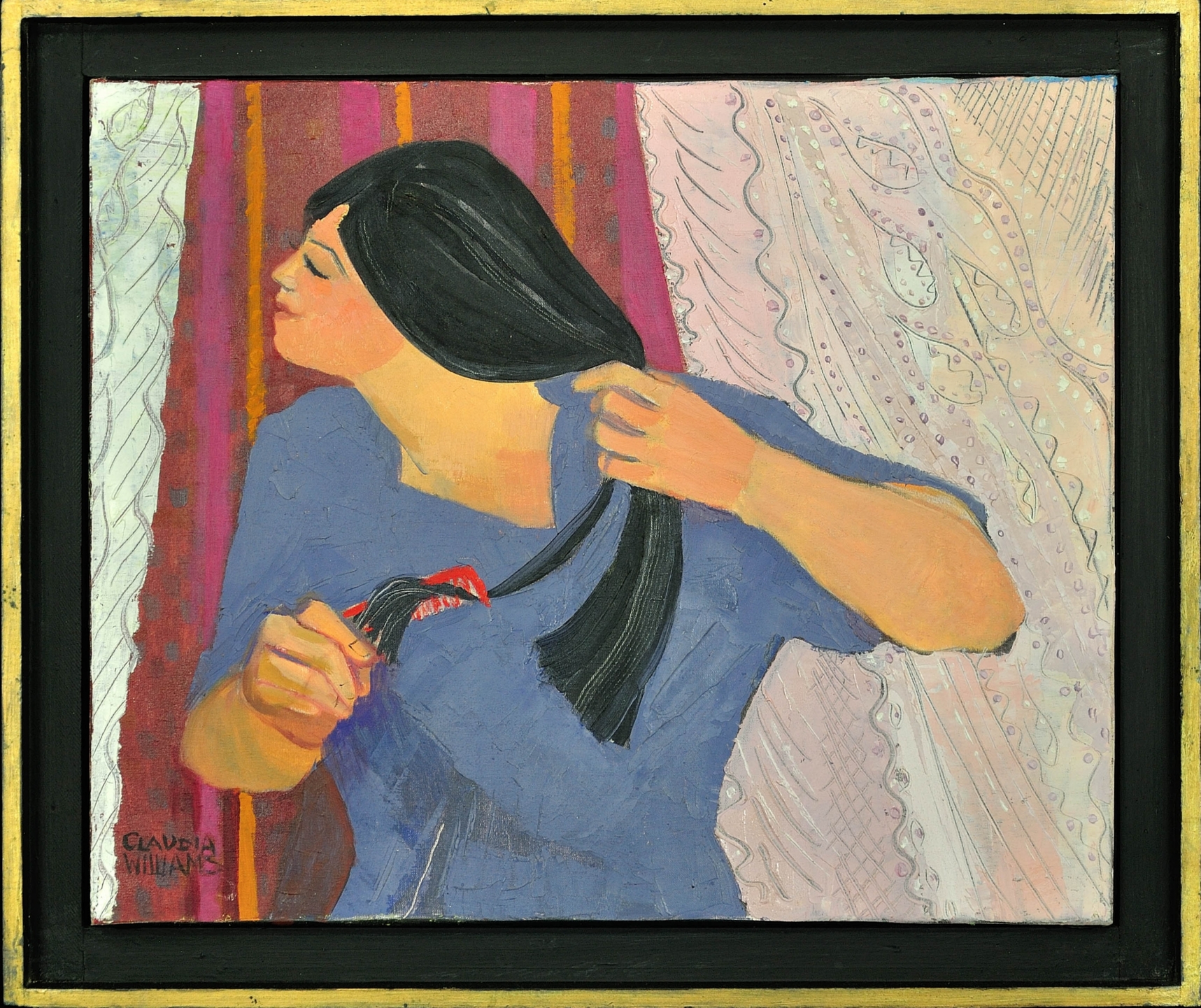 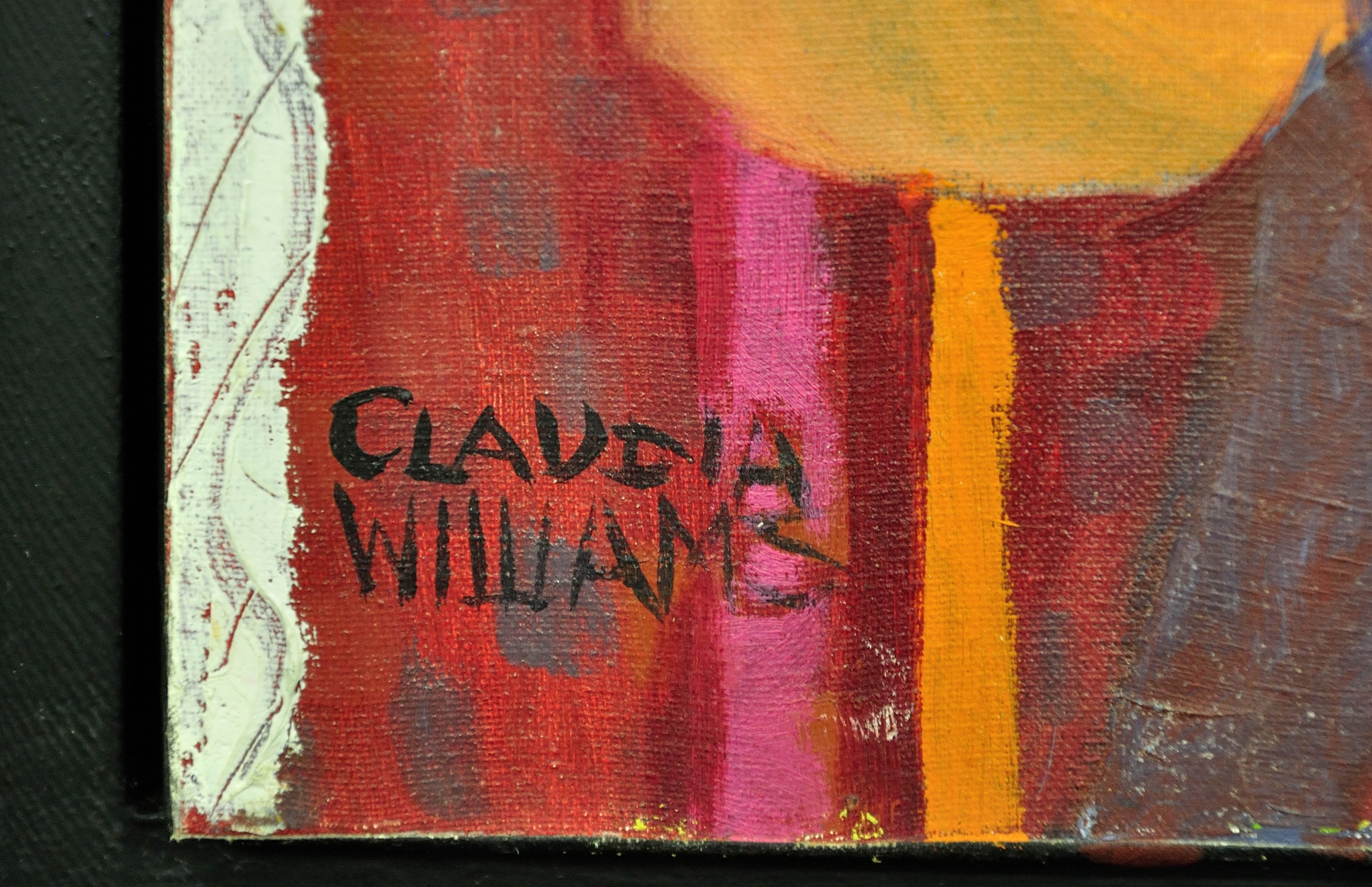 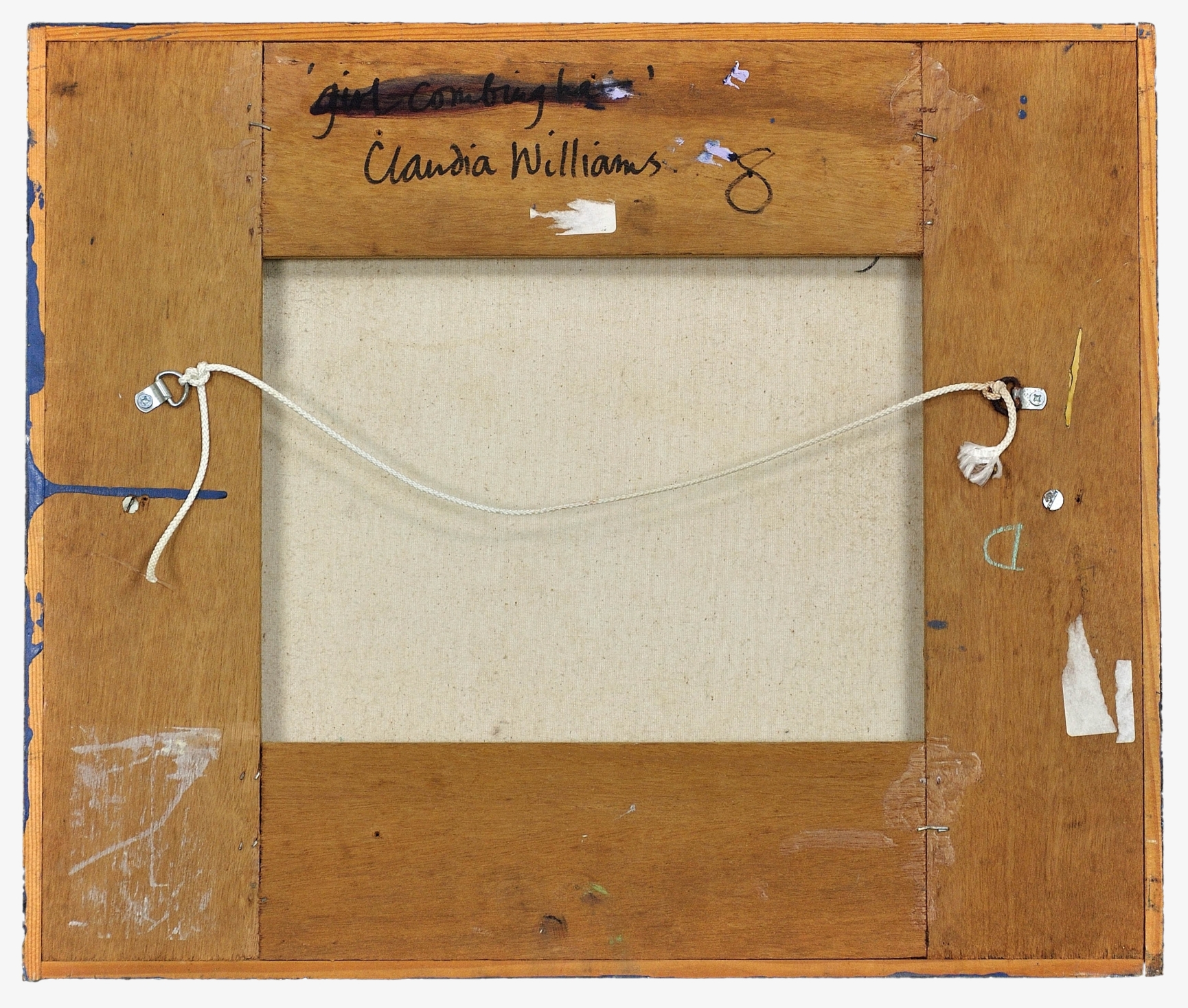 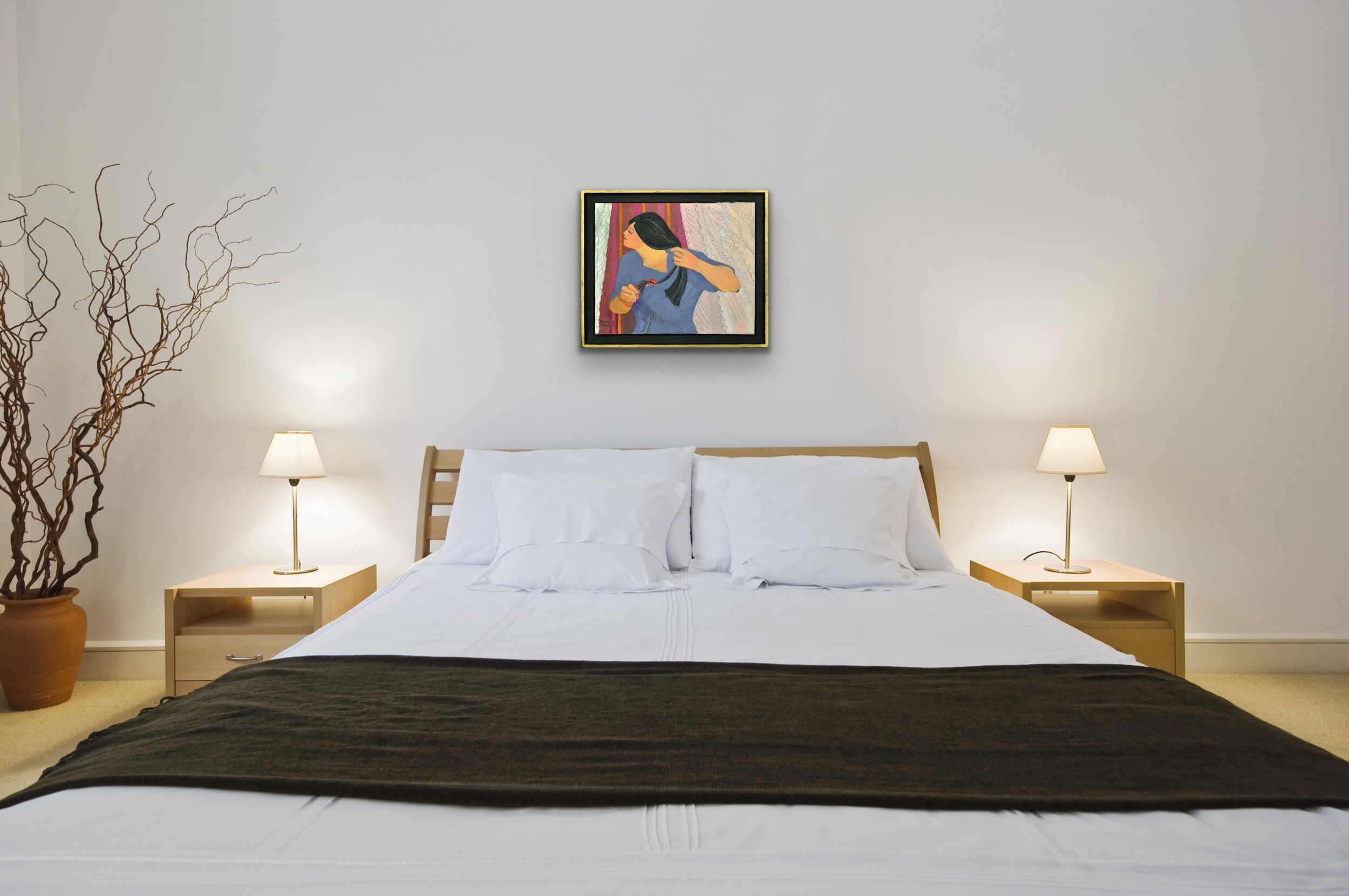 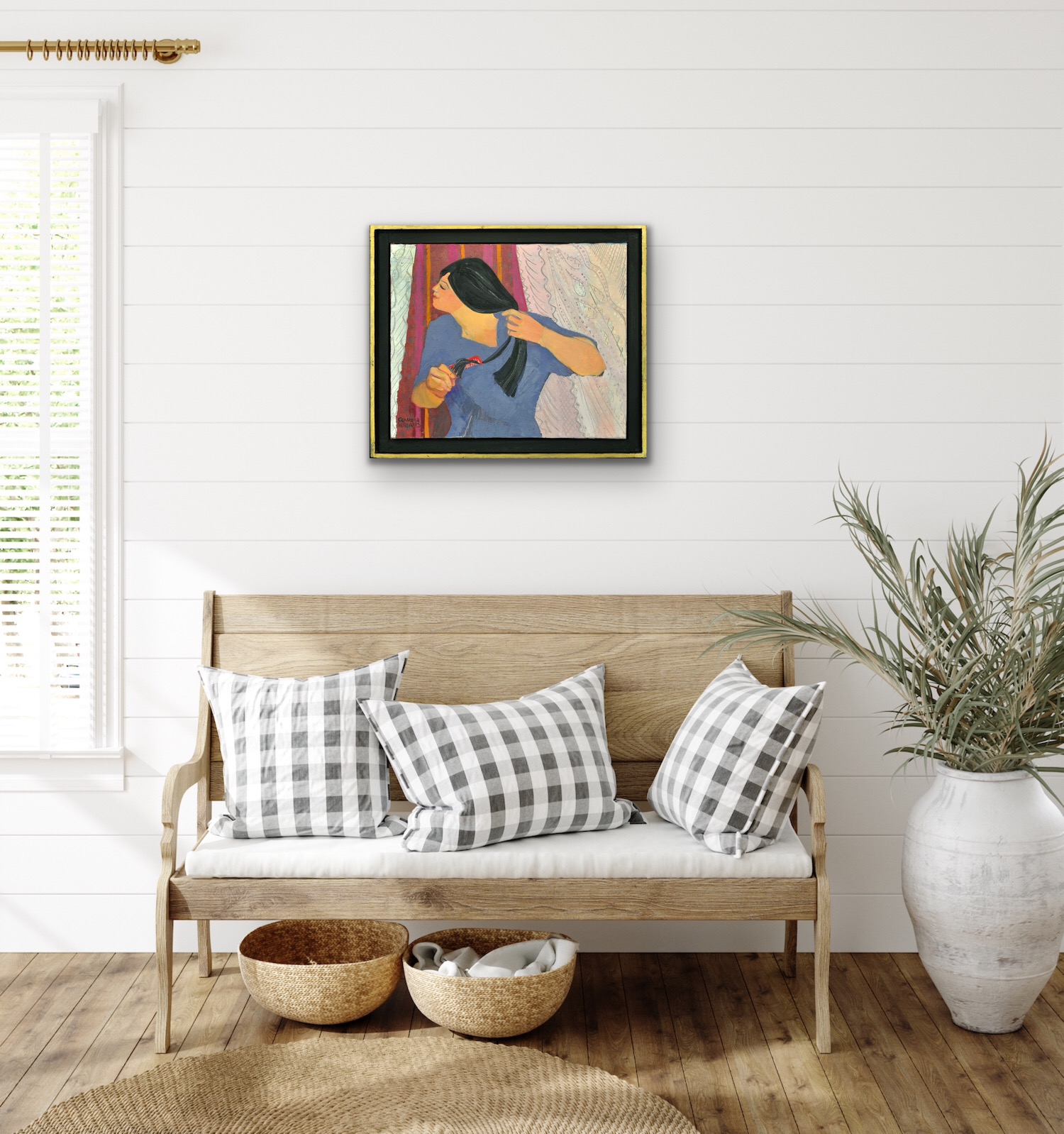 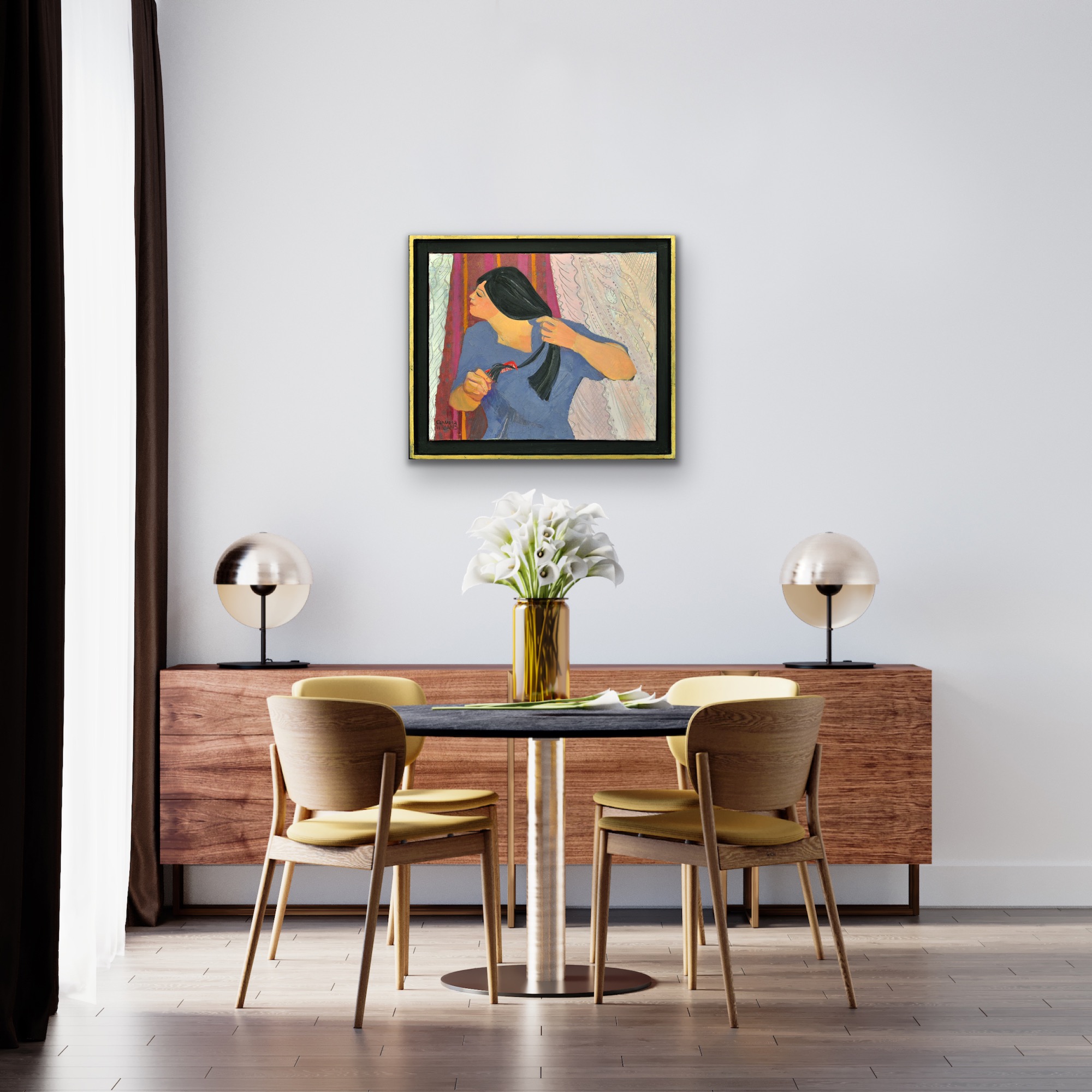 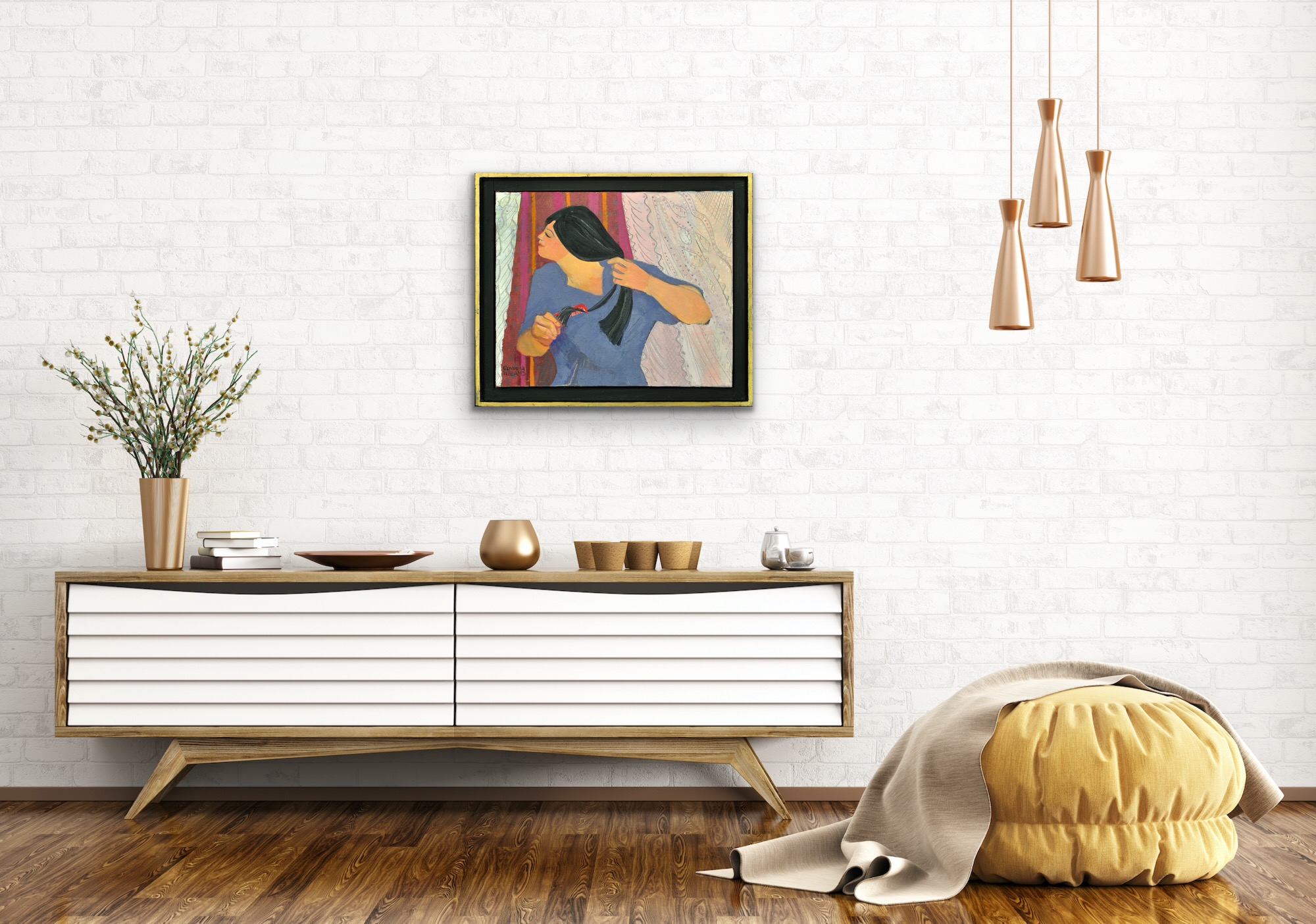 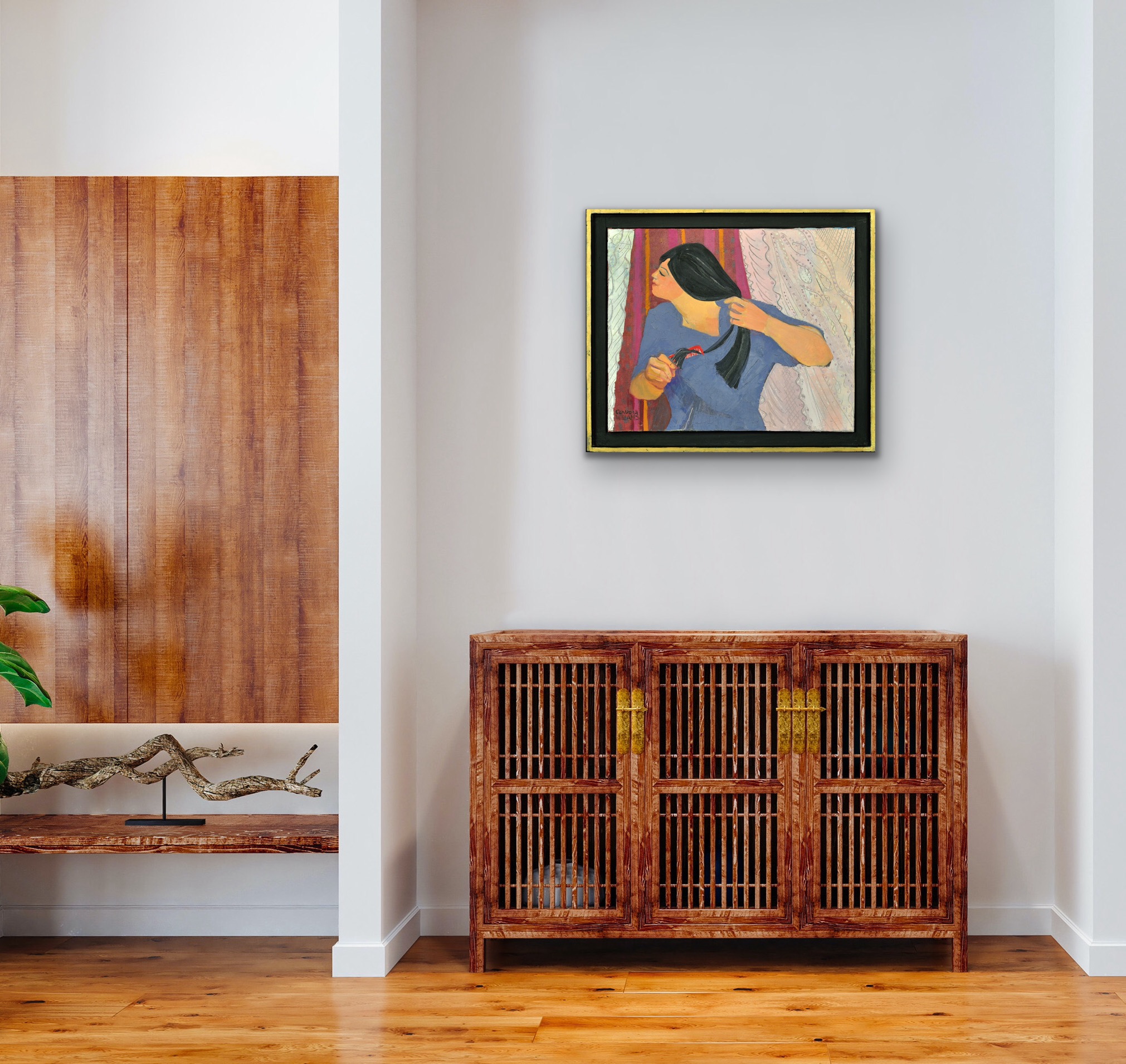 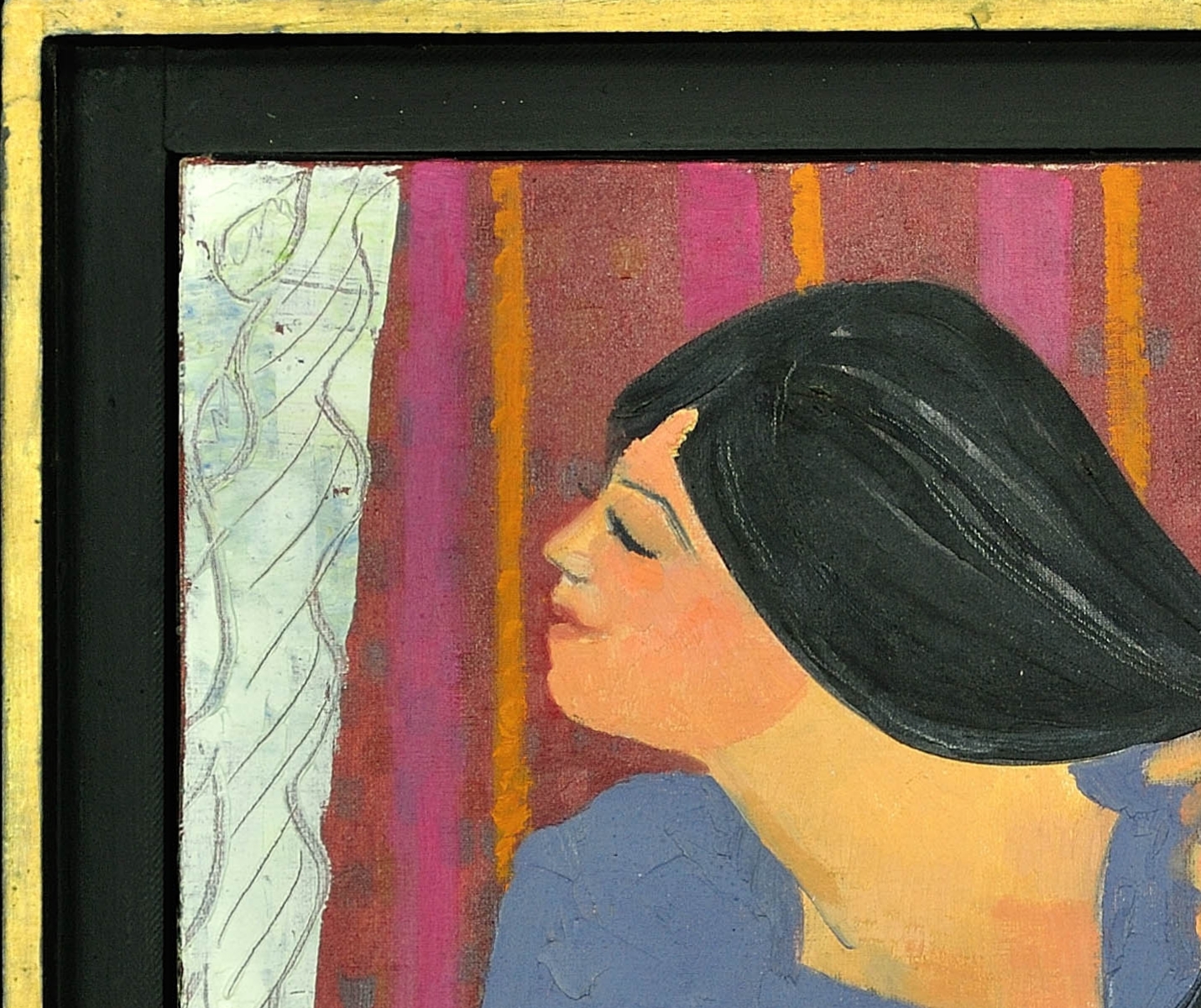 Available for sale from Big Sky Fine Art is this original oil painting by Claudia Williams dating from 1989.
The painting is presented and supplied in its original hand painted wood frame (which is shown in these photographs).
This vintage painting is in very good original, untouched condition. It wants for nothing and is supplied ready to hang and display.
The painting is signed lower left.
Provenance: Direct from the artist’s family. Previously with the Romanet Monique Lucas Galerie, rue de Seine, 75006 Paris.

Claudia Williams is a distinguished figurative artist; although born in England her long association with Wales, from 1946 onwards, means she is very much regarded as Welsh. She was born in Purley in Surrey, but was the great-granddaughter of a Cardiganshire sheep-farmer. She was the only child of Frank and Gladys Williams. She was educated at the Eothen School in Caterham, where she was inspired by the art mistress Christine Walker. She then studied at the Chelsea School of Art from 1950-53 with Bernard Meadows, Frances Richards, Julian Trevelyan and John Berger. Even before she embarked on her formal art studies she was being recognised; in 1949 she won first prize at the Royal Institute Galleries, London, and in 1950 she was the winner of the young persons’ art prize at the National Eisteddford of Wales held at Caerphilly.

After graduating from Chelsea Williams spent the next decade teaching part-time in schools and for the Worker's Educational Association. She also became a regular participant both in group exhibitions organised by the Arts Council of Wales and at the annual Eisteddfod art shows. Her work was included in the Contemporary Welsh Painting and Sculpture exhibition held at the National Museum of Wales in Cardiff during 1957.

Williams married the Welsh artist Gwilym Prichard and they shared their life together for sixty-two years, until Gwilym died in 2015. They had four children and lived a life that was immersed in art, travel, family and love.

As an artist Claudia Williams always focussed her work on people, painting from her experiences as a wife, a mother, and her acute observations of her travels. She painted family members in everyday situations, groups in celebration, youngsters at play. Her themes are often domestic, yet universal and timeless, always depicted with amity and compassion. It has been said that she paints what she knows, family, fellowship and faith, with a personal interpretation. Williams has said that she never gets tired of people watching and that family life was her inspiration. Her work displays a curiosity about the lives of others, concern about the threats to humanity and care for our spiritual wellbeing. Her style is confident, and her palette is vibrant. Her portraits included the composer William Nathias and the children of the Marquis and Marchioness of Anglesey.

Claudia Williams and her husband may have painted different subjects in different styles, (he was known for his rugged Welsh landscapes), but their work complemented one another and they held a number of joint exhibitions together, notably as part of the Bangor Arts Festival. In the early 1980s the couple began travelling through Europe, living for periods on Skiathos in Greece and then, for fifteen years, near Rochefort-en-Terre in Brittany, where they set up something of a small art school, before returning to Wales in 1999. Williams participated in several group shows in Europe, winning first prize at the Salon de Vannes in 1989, exhibiting at the Salon des Beaux Arts in Paris in 1993 and at the Salon de Nantes Biennale in both 1987 and 1989. Solo shows of her paintings were held at the Galerie Romanet in Paris in 1989 and at the Philip Mouwes Gallery in Amsterdam in 1994. In 1995 Williams was awarded with a Silver Medal by the Academy of Arts, Sciences and Letters in Paris, in recognition of her contribution to the arts in France.

Back in Wales Williams took part in many group and solo exhibitions, including the Royal National Eisteddfod of Wales 1952-63, and exhibitions at the Howard Roberts Gallery in Cardiff in 1958, 1959 and 1961.

Williams was elected a member of the Royal Cambrian Academy in 1979 and became an Honorary Fellow of Bangor University in 2002. The National Library of Wales at Aberystwyth held a very popular major retrospective of her work in 2000 and an exhibition of more recent works in 2010 while the Martin Tinney Gallery in Cardiff held an exhibition of new material in 2016. In 2014 the National Library of Wales published a book of some twenty paintings, mostly pastels, by Williams that were inspired by the displacement of local villages to create the Llyn Celyn reservoir.

The work of Claudia Williams features in many important public and private collections. These include the art collections of Cardiff University, Bangor University, Aberystwyth University, Southampton Art Gallery, Newport Museum and Art Gallery and the Contemporary Art Society for Wales. Her work has also been purchased by the Welsh Arts Council and the National Museum of Wales in Cardiff holds one of her paintings for the National Collection.

This original oil on canvas by Claudia Williams, painted in Brittany, depicts a young woman combing her long dark hair. She is looking to her right, so that we see her face in profile, holding her hair on her left hand and a red comb in the right hand. She is wearing a simple blue dress and behind her is a purple and orange striped curtain and a decorative lace-like backdrop. The piece is stylish and distinctive with a confident use of colour; this is classic Claudia Williams. 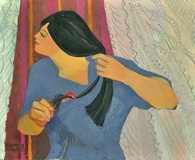