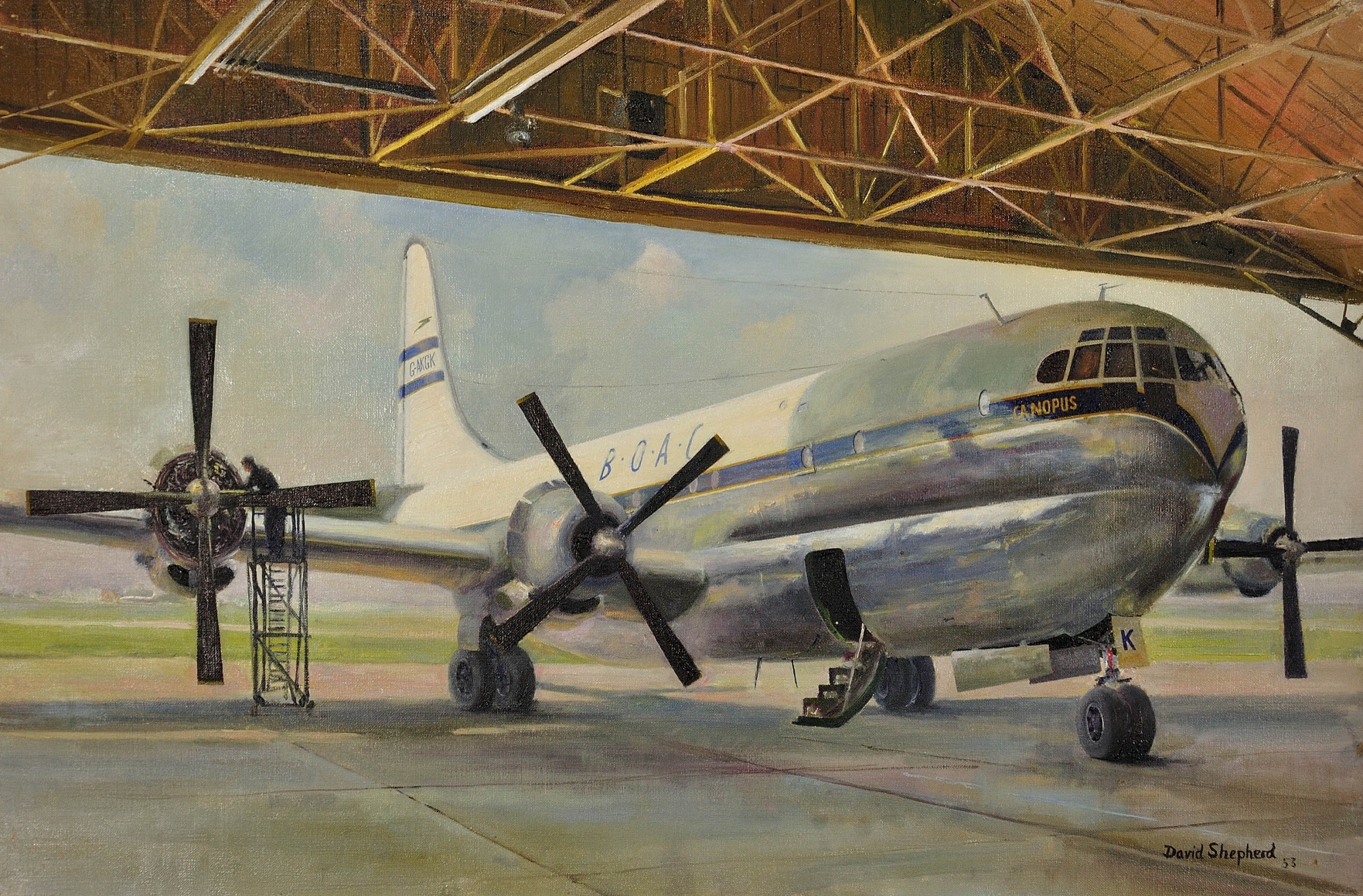 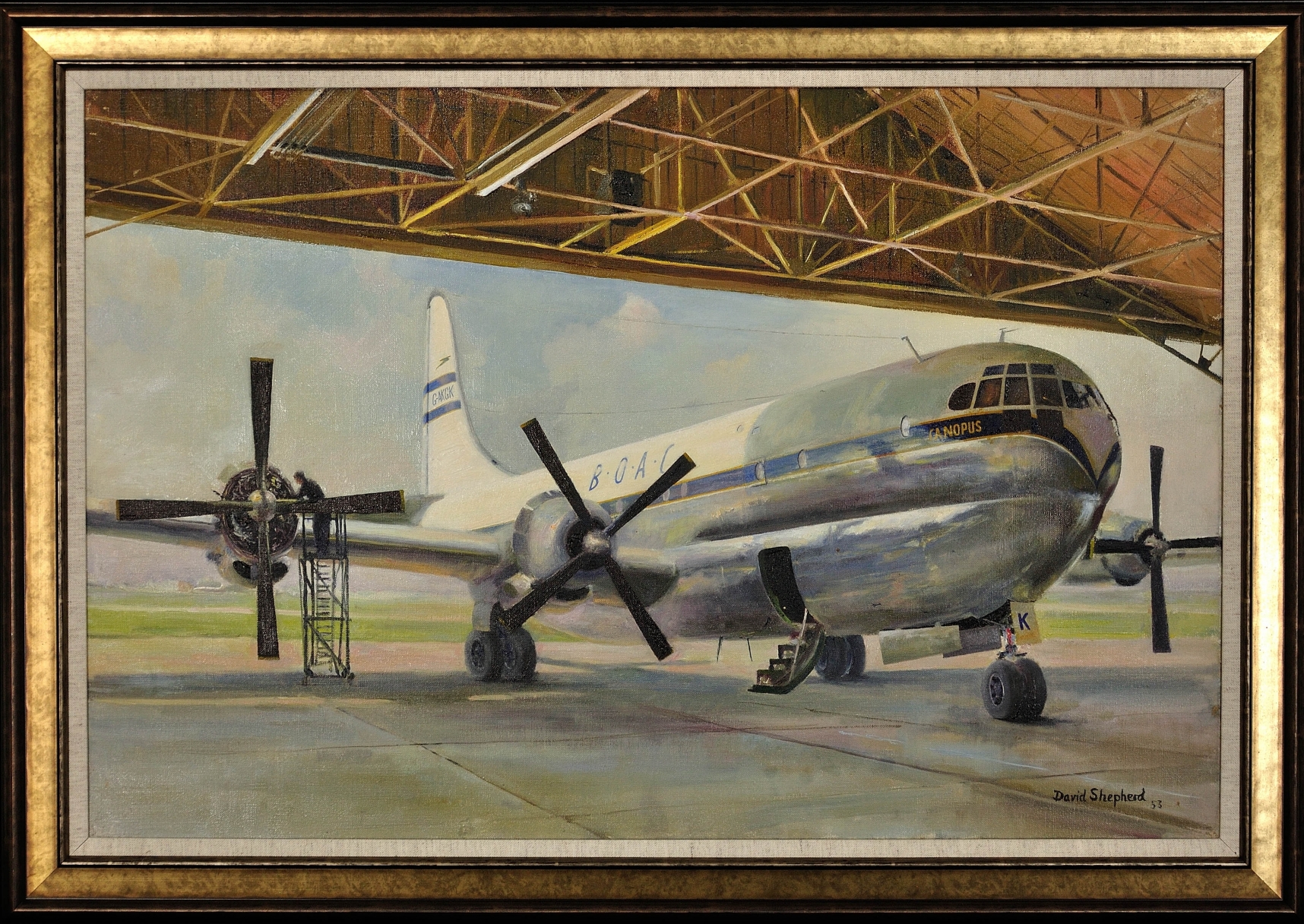 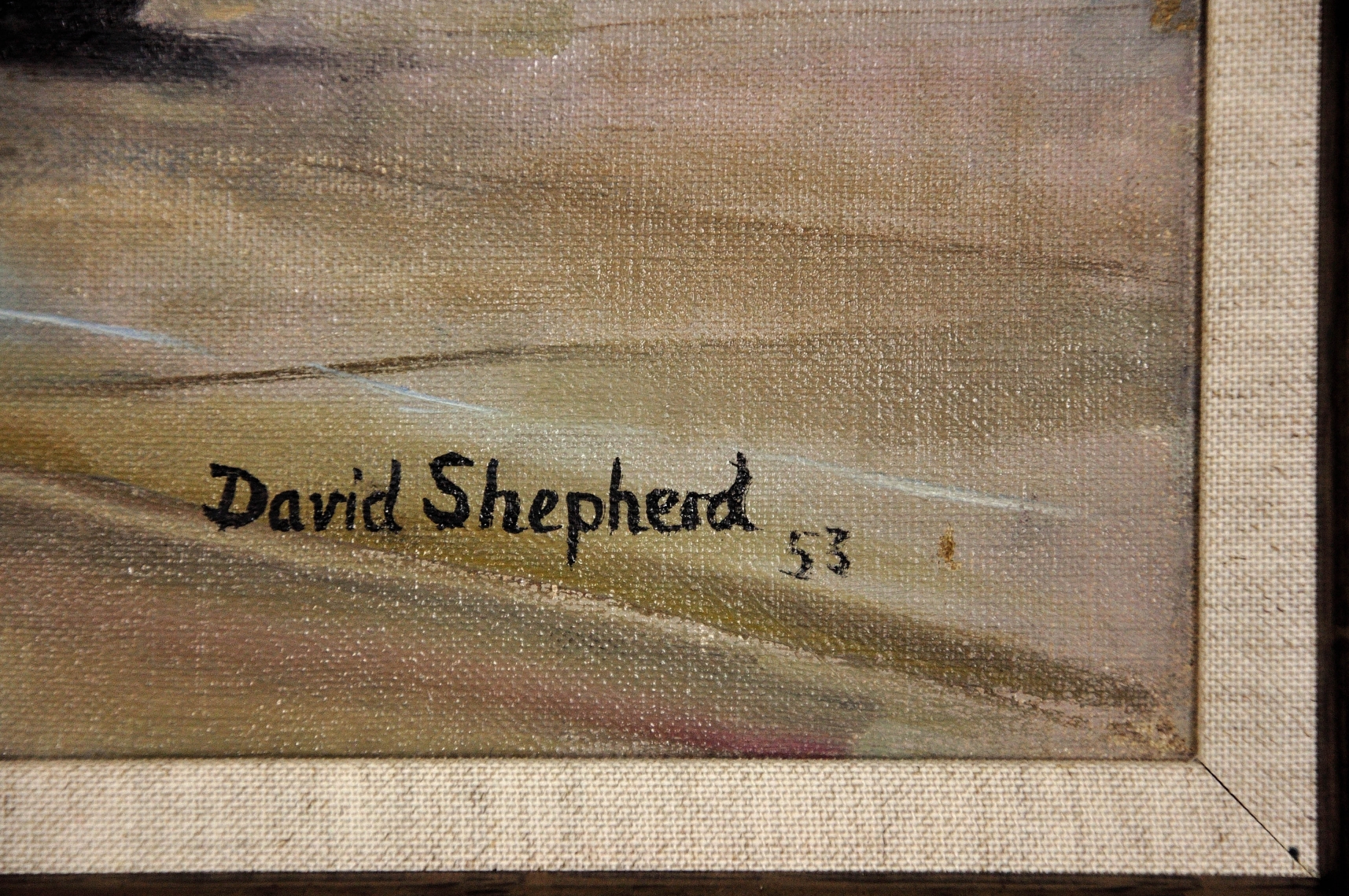 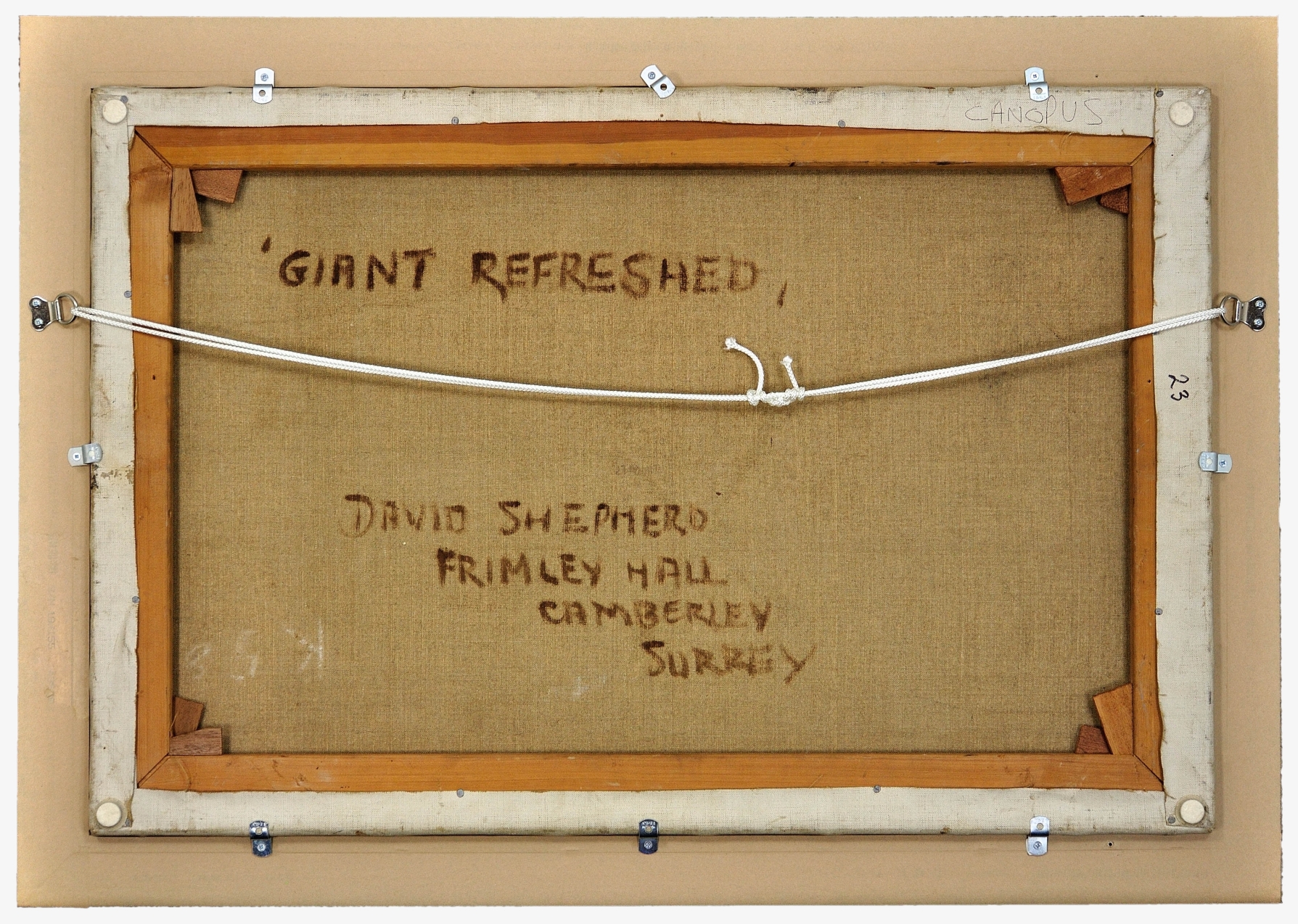 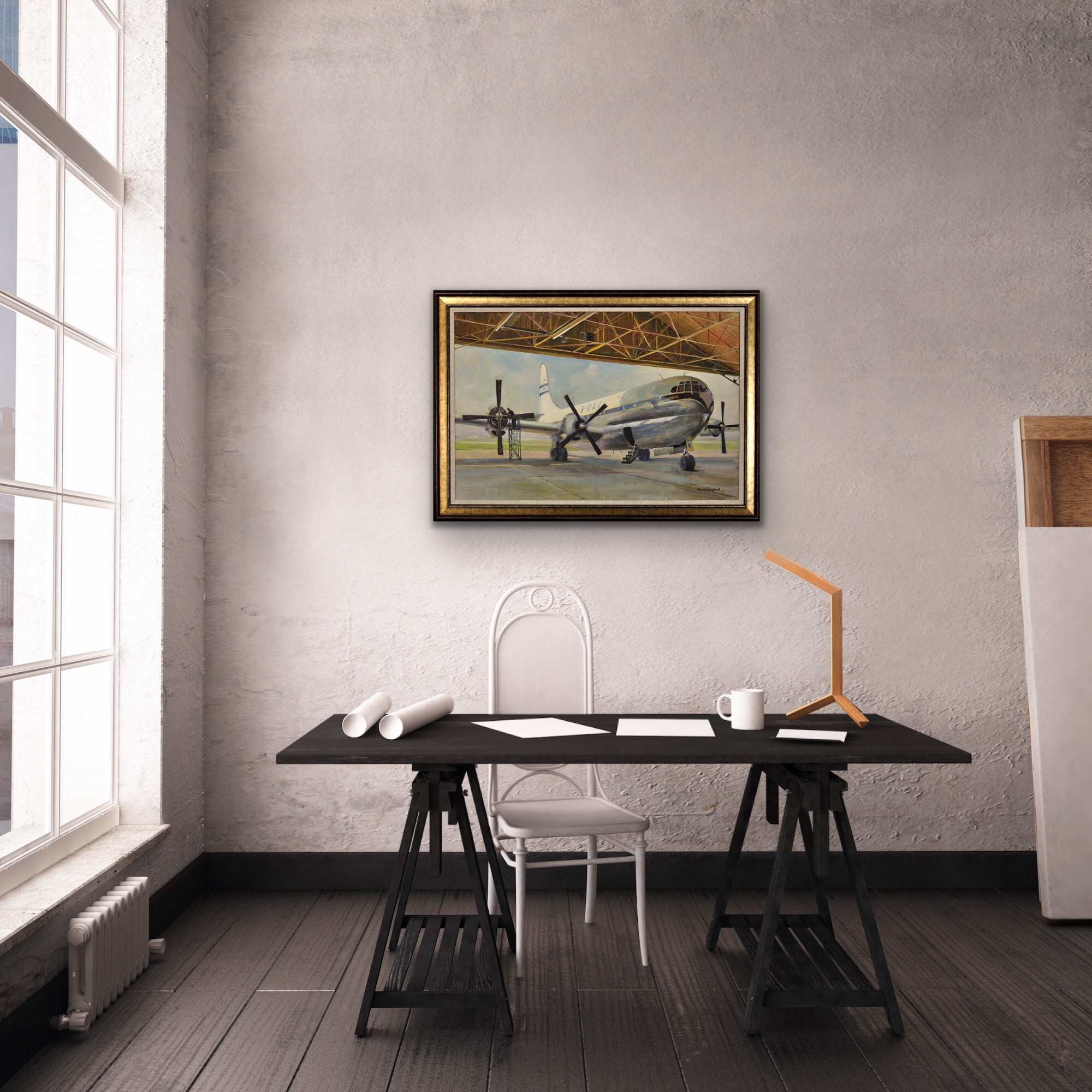 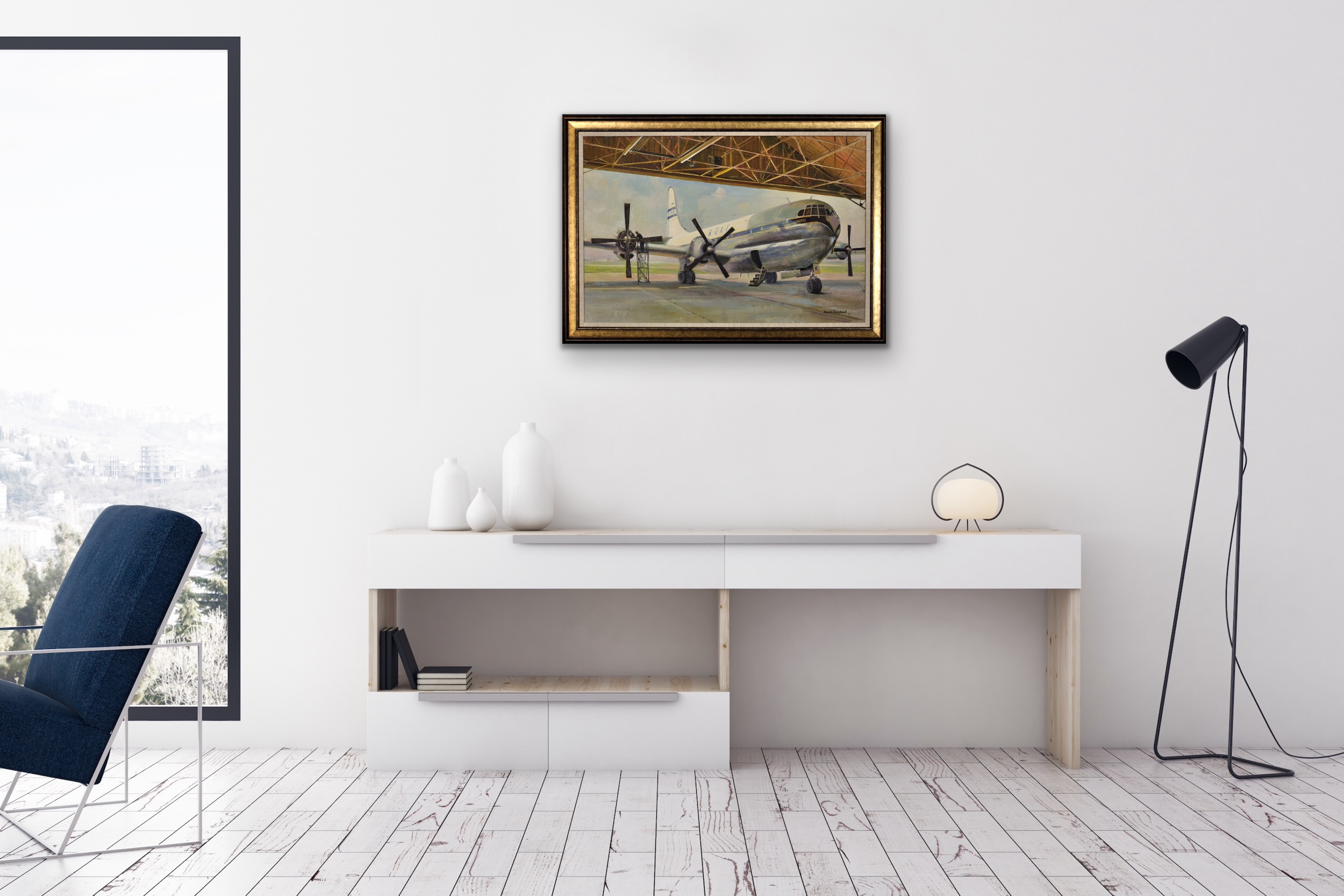 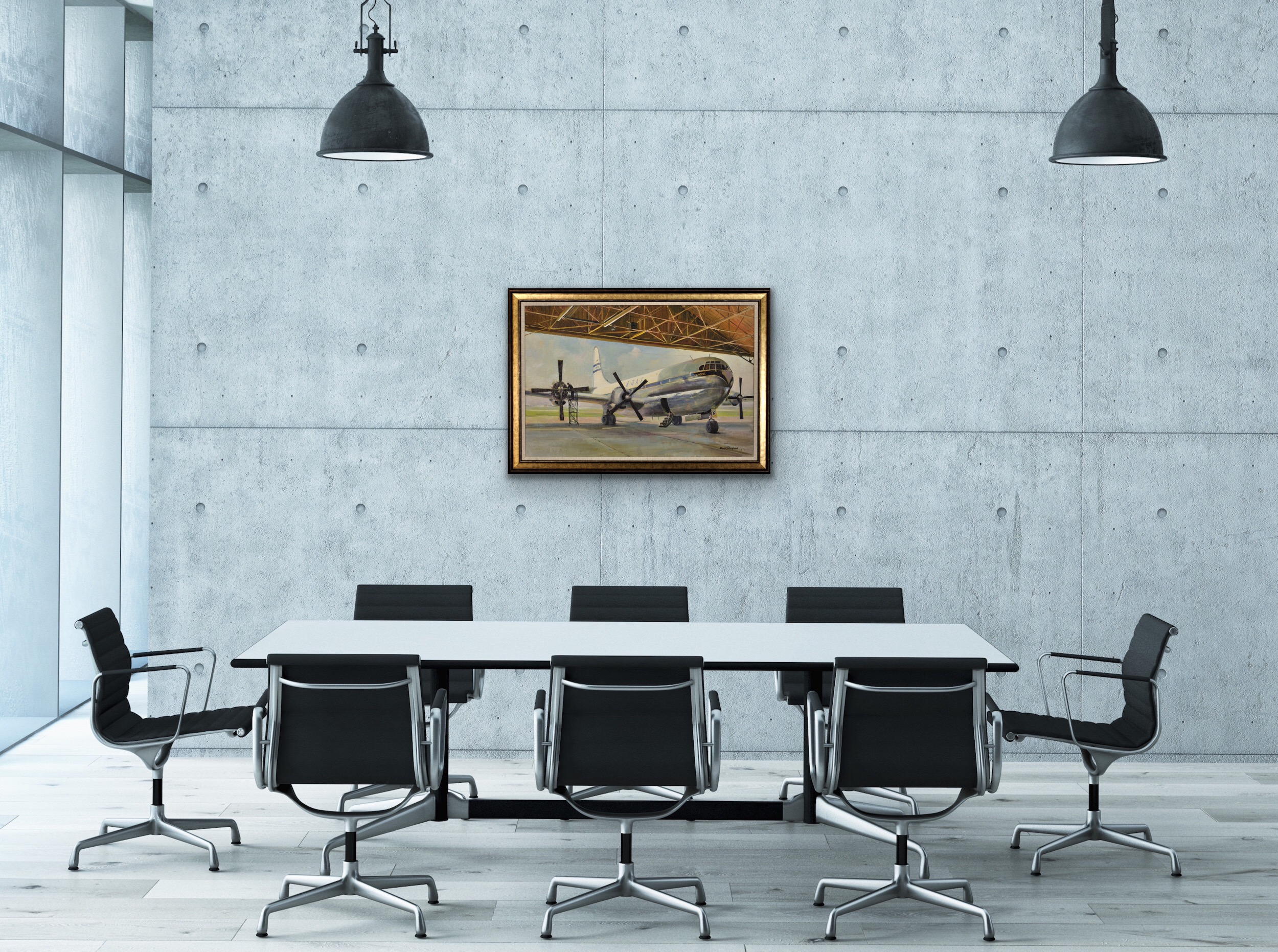 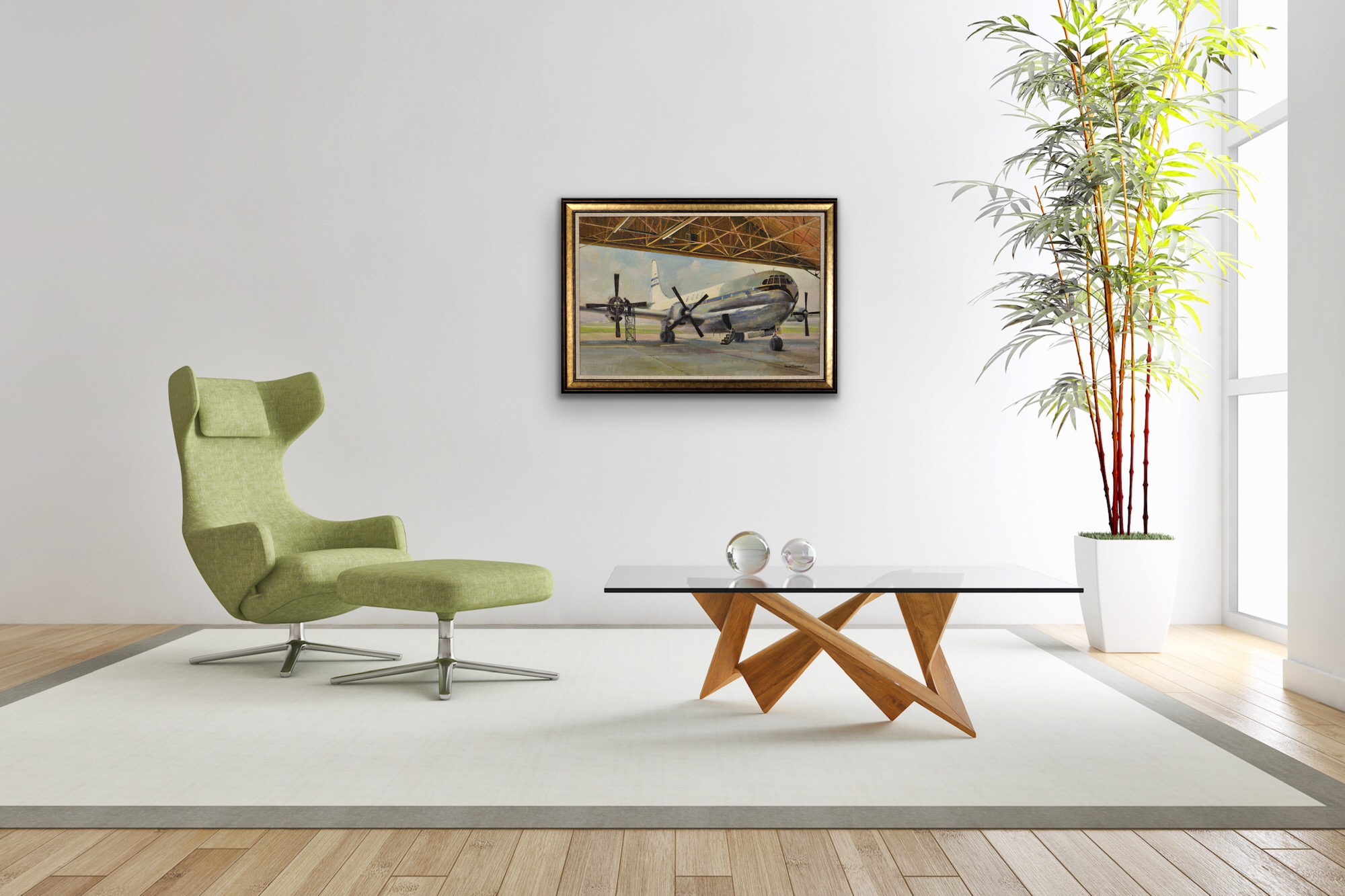 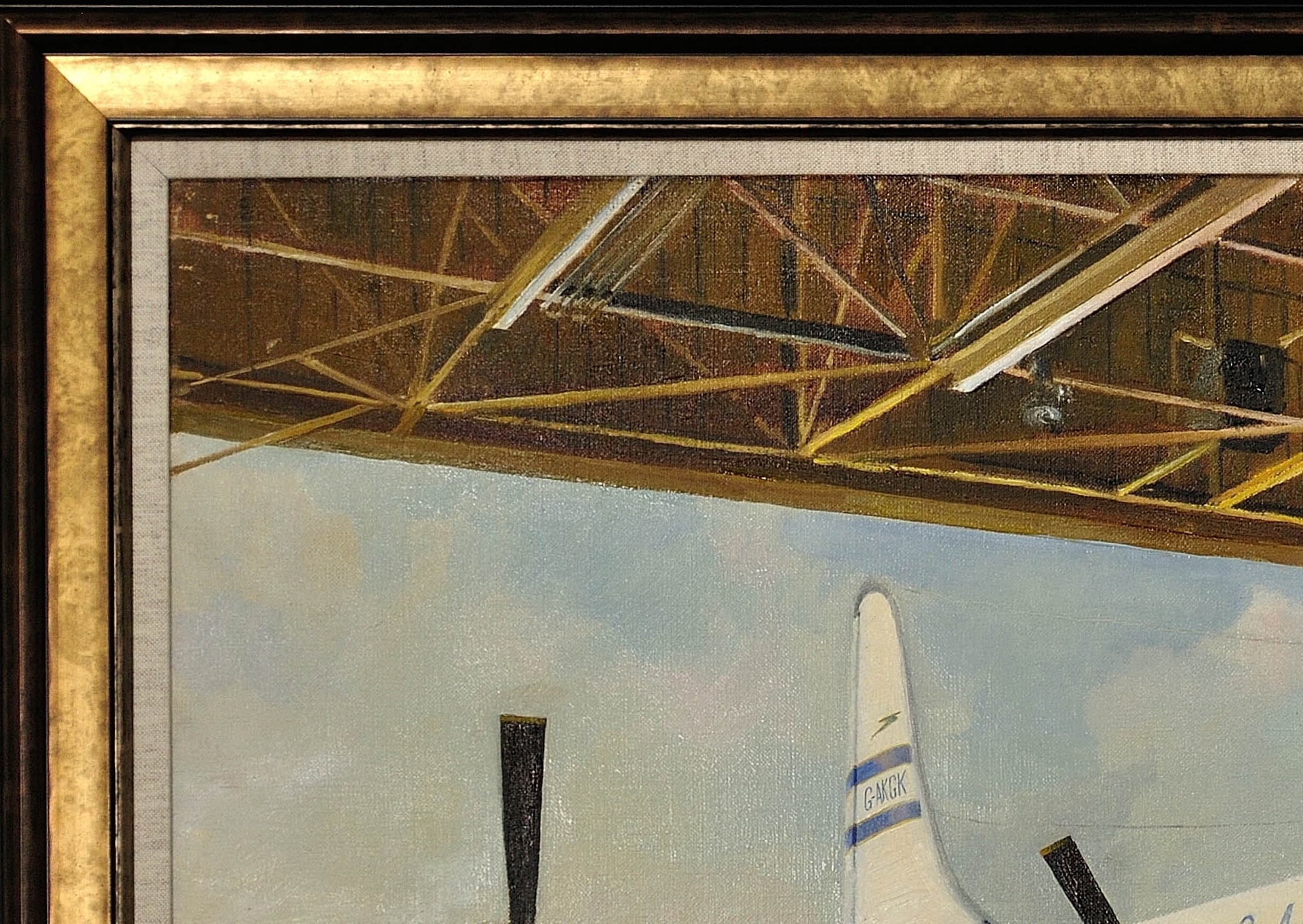 Available for sale from Big Sky Fine Art; this original oil painting by David Shepherd dated 1953.
The painting is presented and supplied in its original frame (which is shown in these photographs).
The painted surfaces, the canvas and the frame are entirely in their original untouched condition. No restoration, cleaning or conservation has been performed on the piece.
This vintage painting is in very good condition, commensurate with its age. It wants for nothing and is supplied ready to hang and display.
The painting is signed and dated 1953 lower right. The reverse carries the title and the address of David Shepherd’s parents’ house at Frimley Hall, Camberley, Surrey which was his home in his early twenties.
Provenance: The artist’s estate.

One of Britain’s best known and loved artists, David Shepherd CBE was a passionate advocate for engineering achievements and conservation, both of which are widely represented in his wonderful works. This respected artist and author was hugely successful, earning an enduring international reputation and wide collector base.

Richard David Shepherd was born in Hendon, London on 25th April 1931. He showed early artistic talent and attended Stowe School in Buckinghamshire. After leaving school he travelled to Kenya in the hope of becoming a game warden but was rejected. He returned to the UK with the hope of studying art at the Slade School but was rejected there too. He was considering becoming a bus driver when, following a chance encounter, he was taken on by the artist Robin Goodwin, who trained him in Chelsea for three gruelling years.

Shepherd began his artistic career as an aviation artist, prompted by his early boyhood experience in London during the Blitz. He was well suited to painting aircraft because he had been taught to be accurate, while avoiding the pitfalls of making a painting look like a photograph. His passion for aircraft endured and he was a founder-member of the Society of Aviation Artists. Shepherd’s talents were recognised and he was commissioned to paint many military works by the Royal Navy, the Parachute Regiment, the Green Howards and the Special Air Service. His love of transport with finely tuned engineering extended to steam locomotives too and he personally bought two mainline steam trains, Black Prince and The Green Knight and founded the East Somerset Railway.

In 1960 the Royal Air Force flew Shepherd to Kenya and asked him to paint the local wildlife. From this point his career really took off and he never looked back. He subsequently gained an international reputation for his sensitive portrayals of animals, particularly the big cats and elephants. Images of his most famous paintings are familiar to us all as prints, and other merchandise. Shepherd was also known for his stunning portraits, including HM Queen Elizabeth and the Queen Mother.

After his early expeditions into the African bush Shepherd became interested in not only painting wildlife but conserving it too, and he later devoted much of his life to campaigning to preserve the endangered species of Africa and their natural habitat. He founded the David Shepherd Wildlife Foundation and raised millions of pounds to help this vital cause.

David Shepherd was given many awards for both his artistic and charitable endeavours; he was awarded an Honorary Degree on Fine Arts by the Pratt Institute in New York in 1971 and, in 1973, the Order of the Golden Ark by HRH The Prince of The Netherlands for his services to conservation. He was made a Member of Honour of the World Wide Fund for Nature in 1979 and in the same year received the Order of the British Empire for his services to Wildlife Conservation. In 1986 David was elected a Fellow of the Royal Society of Arts and in 1988, President Kenneth Kaunda of Zambia awarded him the Order of Distinguished Service. He was made a Fellow of the Royal Geographical Society in 1989 and he was awarded an Honorary Doctorate of Science of Hatfield Polytechnic (now the University of Hertfordshire) in 1990. In 1996, David was made an Officer (Brother) of the Order of St. John. In 2008 he was awarded the CBE for his contribution to conservation. In 2012, David was the first artist to receive the 'True Englishman' Award.

Shepherd published five books about his art, including two volumes of autobiography, The Man who loves Giants, An Artist among Elephants and Engines, 1975, and David Shepherd, The Man and His Paintings, 1985.

Shepherd was married to Avril; they lived in Hascombe, Godalming, Surrey, where they raised four daughters, all of whom are involved in David Shepherd wildlife conservation work. He died on 19 September 2017, after suffering from Parkinson’ disease. His artistic achievements and charitable work will ensure that his legacy lives on.

This magnificent original oil on canvas by David Shepherd depicts the aircraft in BOAC livery named Canopus, a Boeing 377 Stratocruiser.

The plane is viewed from the inside of a vast hanger. We see the wooden structure of the inside of the hanger roof, and this gives a sense of perspective and space. The plane itself is stationary, its main doorway open, steps lowered. There is a mobile platform positioned aside one of the wings with a figure carrying out checks on a propellor blade. The plane is seen as a magnificent giant, a feat of engineering, in perfect condition and ready for its next mission.

It was painted in 1953 and is signed and dated lower right.

The Stratocruiser set a new standard for luxury air travel and represented Boeing’s re-emergence into the commercial market after World War II. This new giant benefited from all the speed and technical improvements available to bombers at the end of the war, but was built for a new passenger era with its tastefully decorated extra-wide cabin and gold-appointed dressing rooms. A circular staircase led to a lower deck beverage lounge, and flights attendants prepared hot meals in a state-of -the-art galley. As a sleeper, the Stratocruiser was equipped with 28 upper and lower bunk beds. Between 1947 and 1950 Boeing built 56 Stratocruisers; this model marked the company’s first significant success selling passenger planes to airlines in other countries. 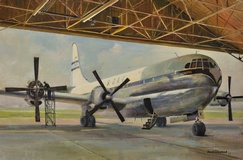