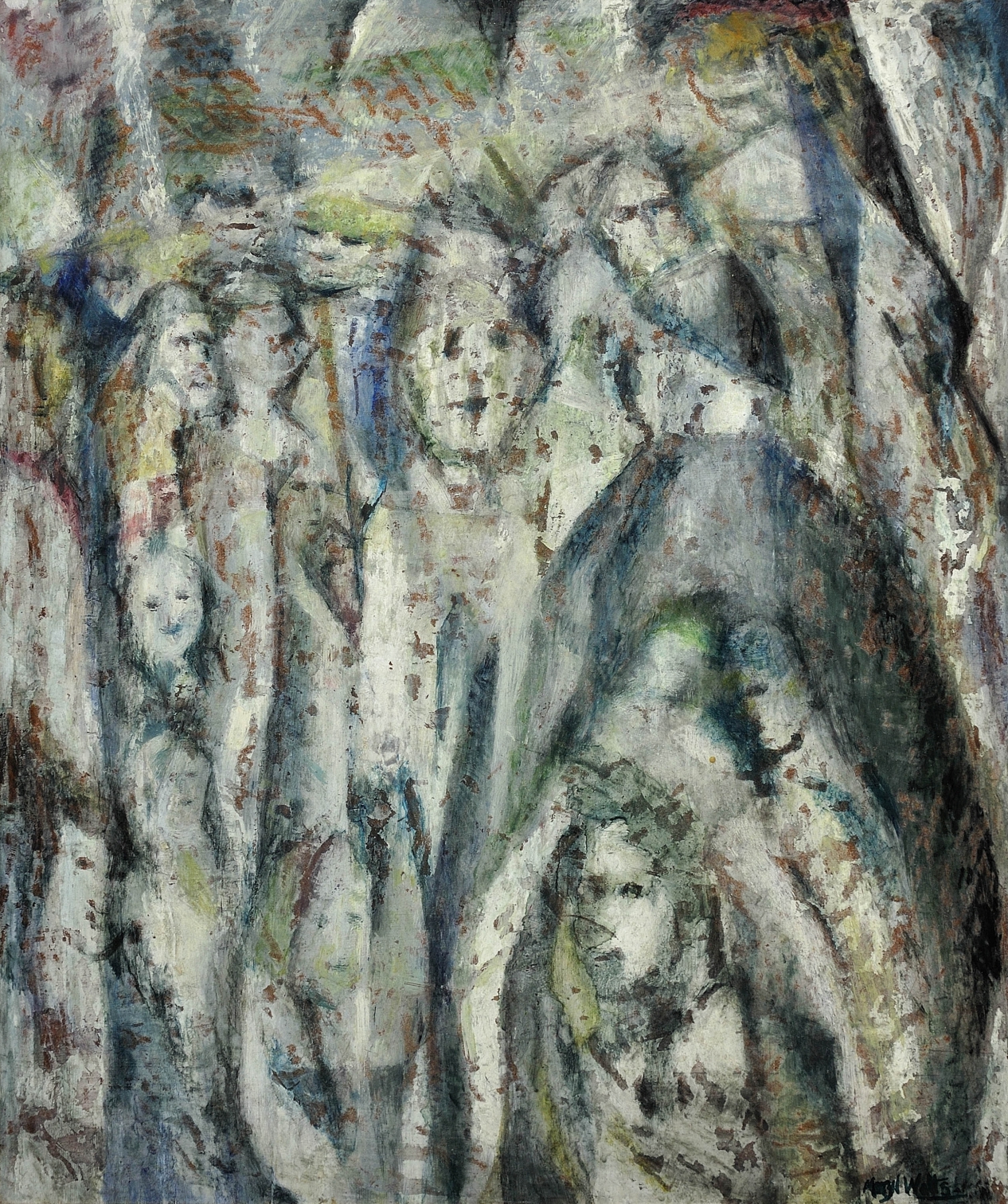 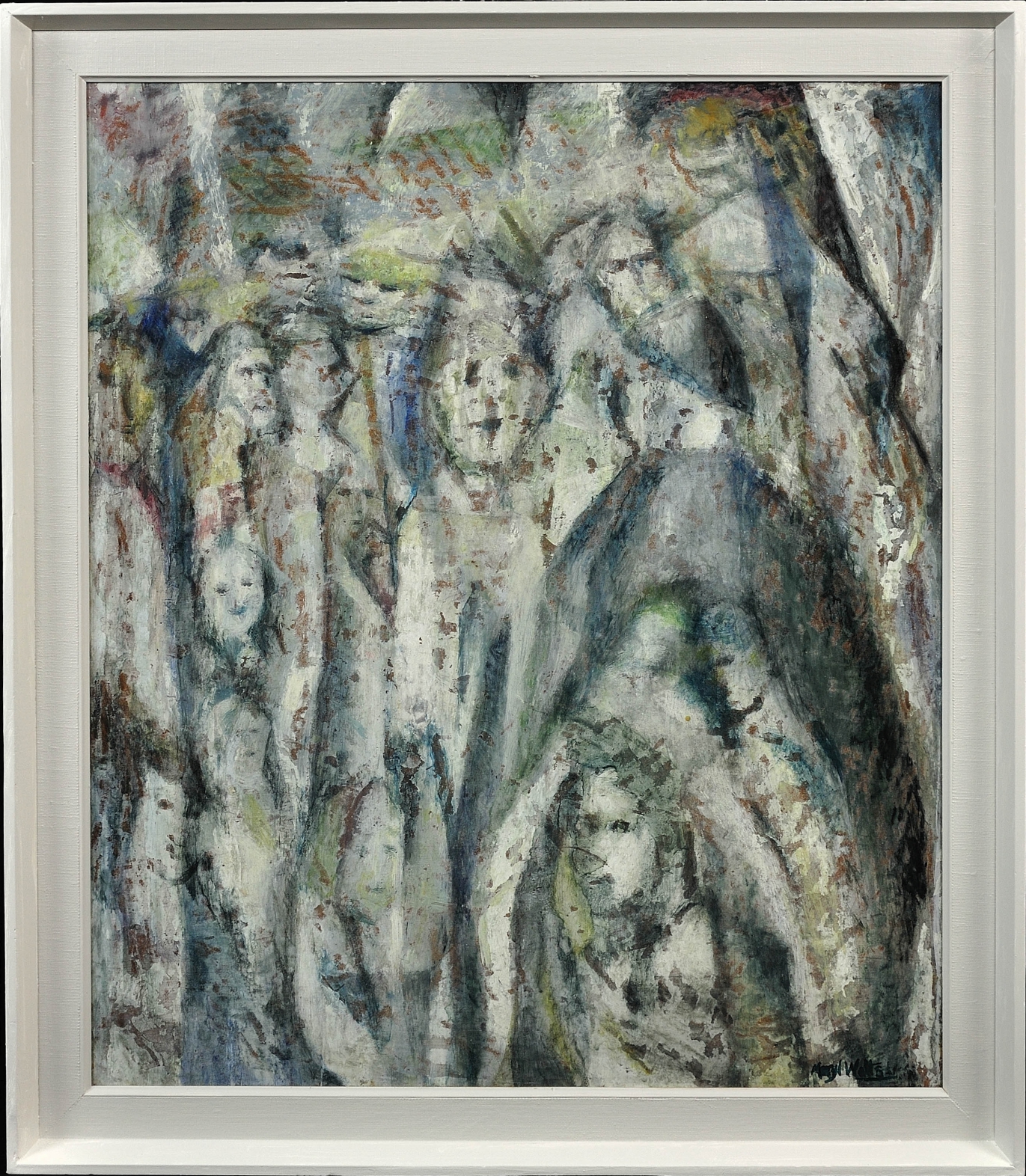 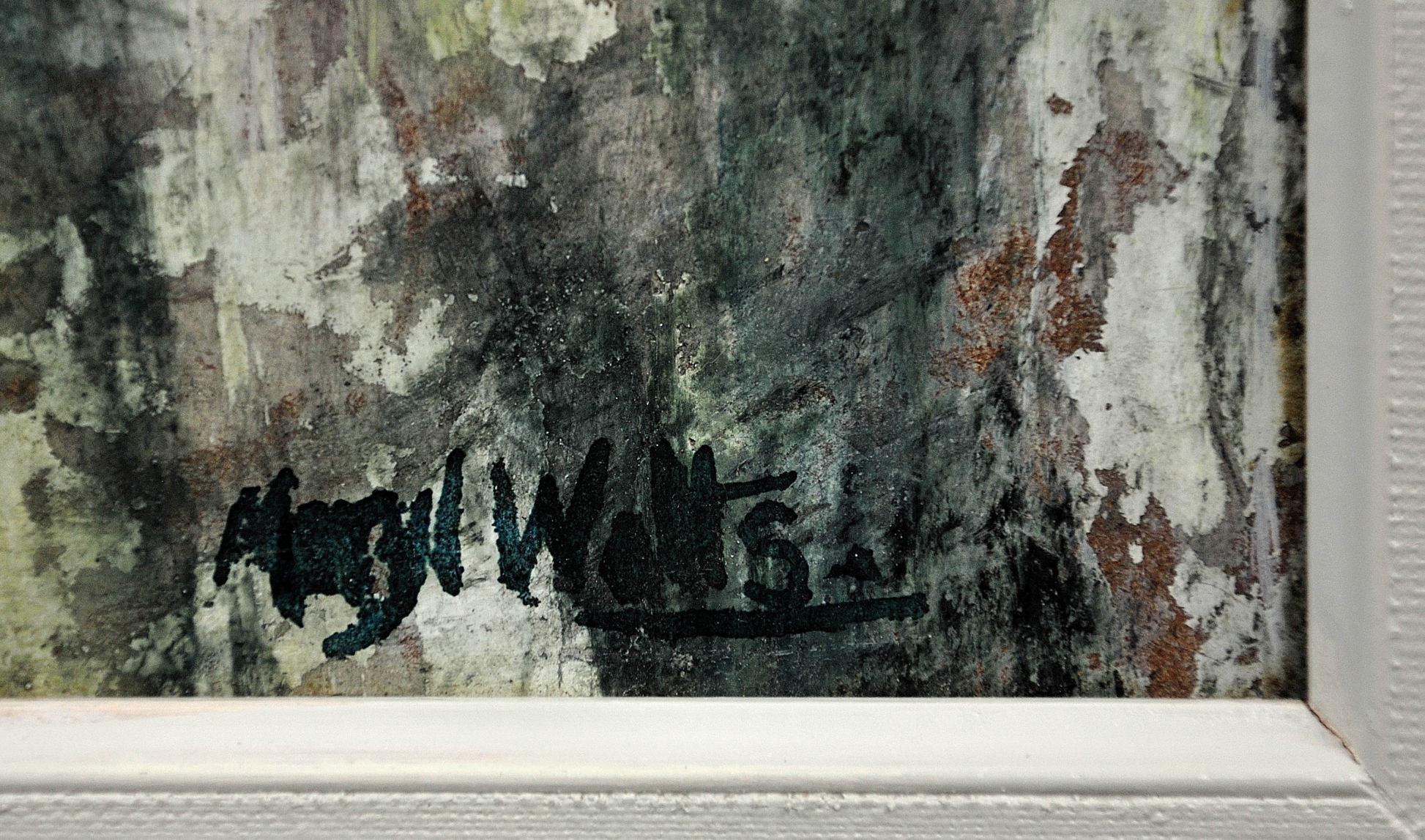 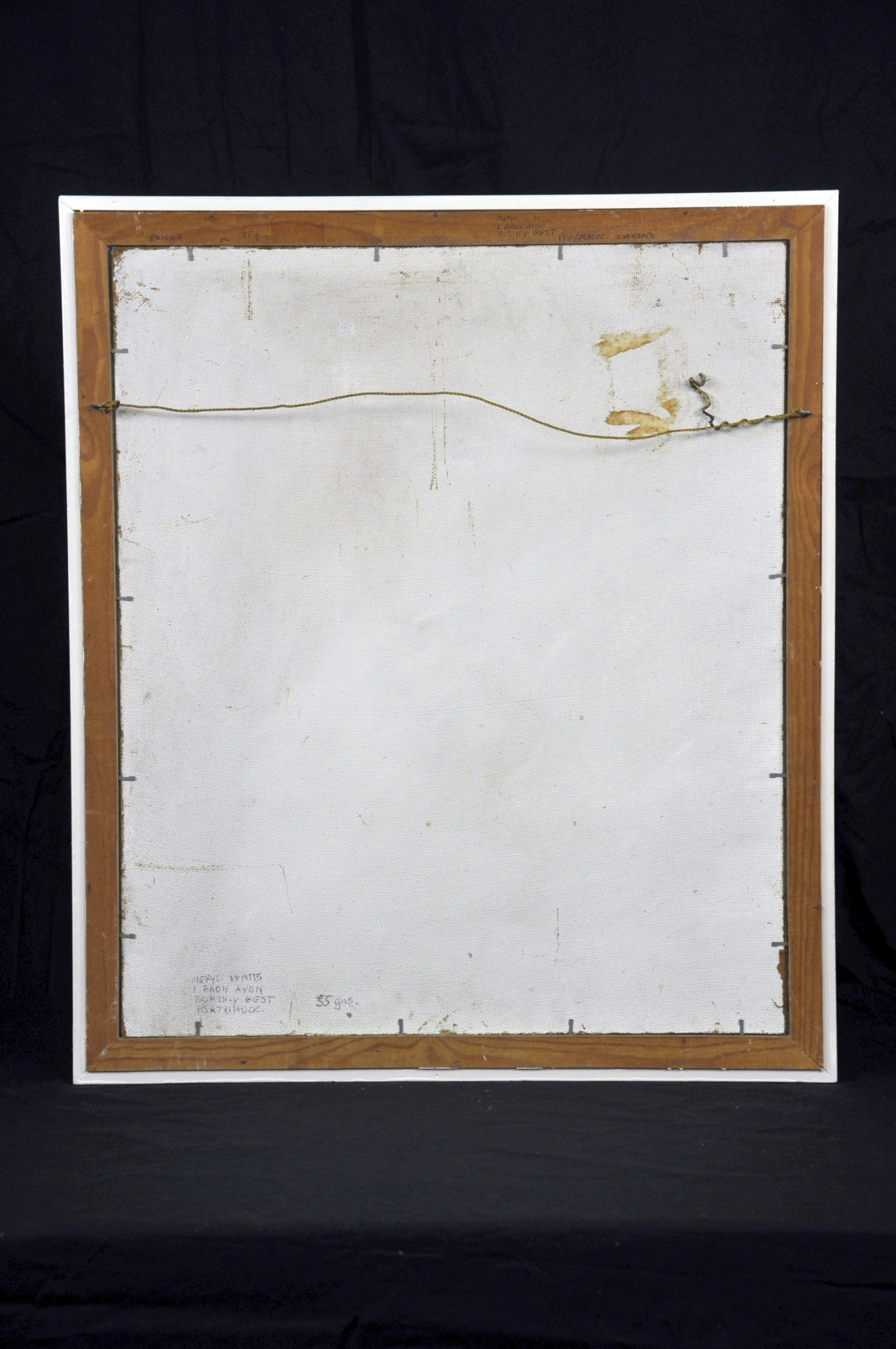 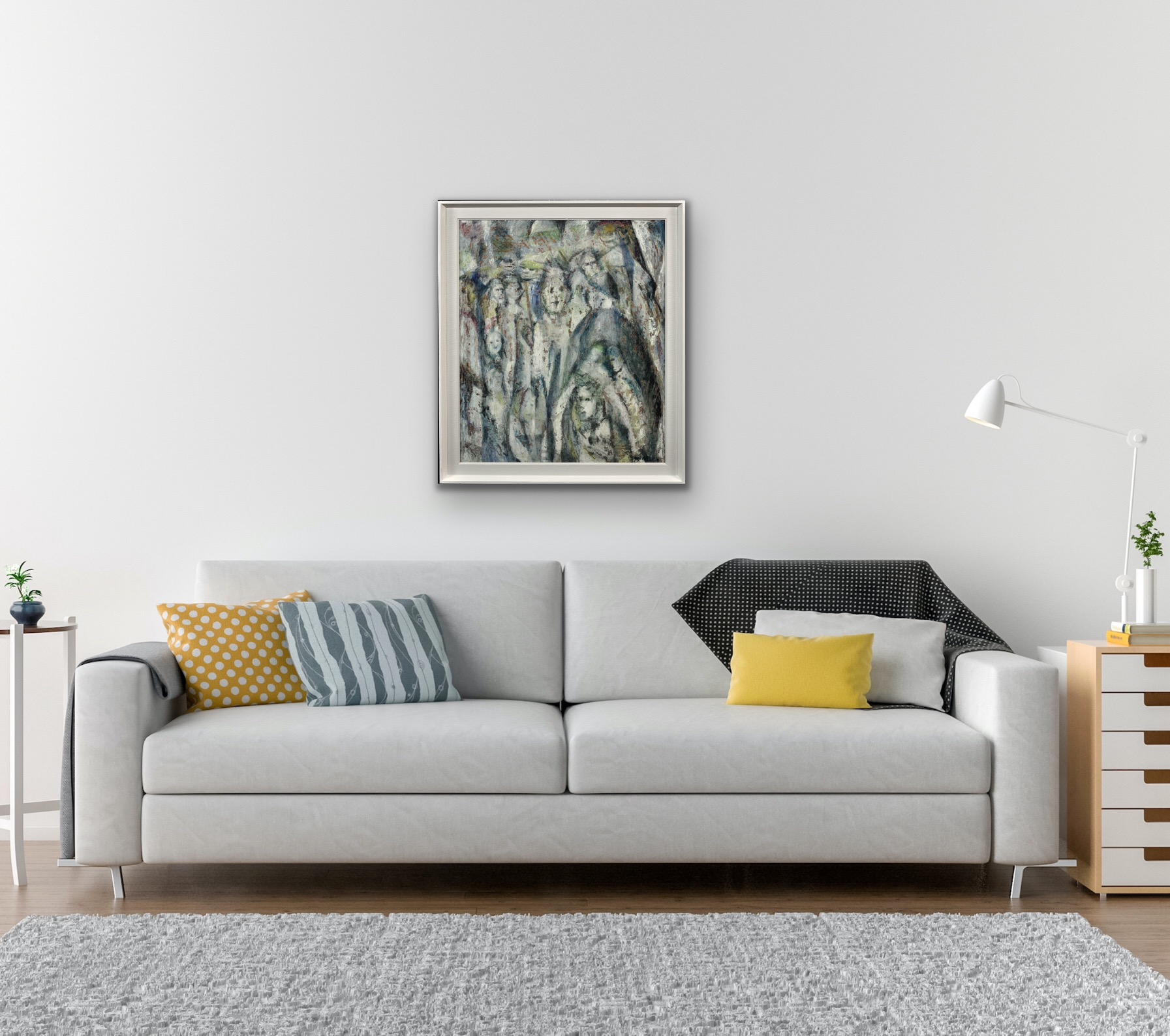 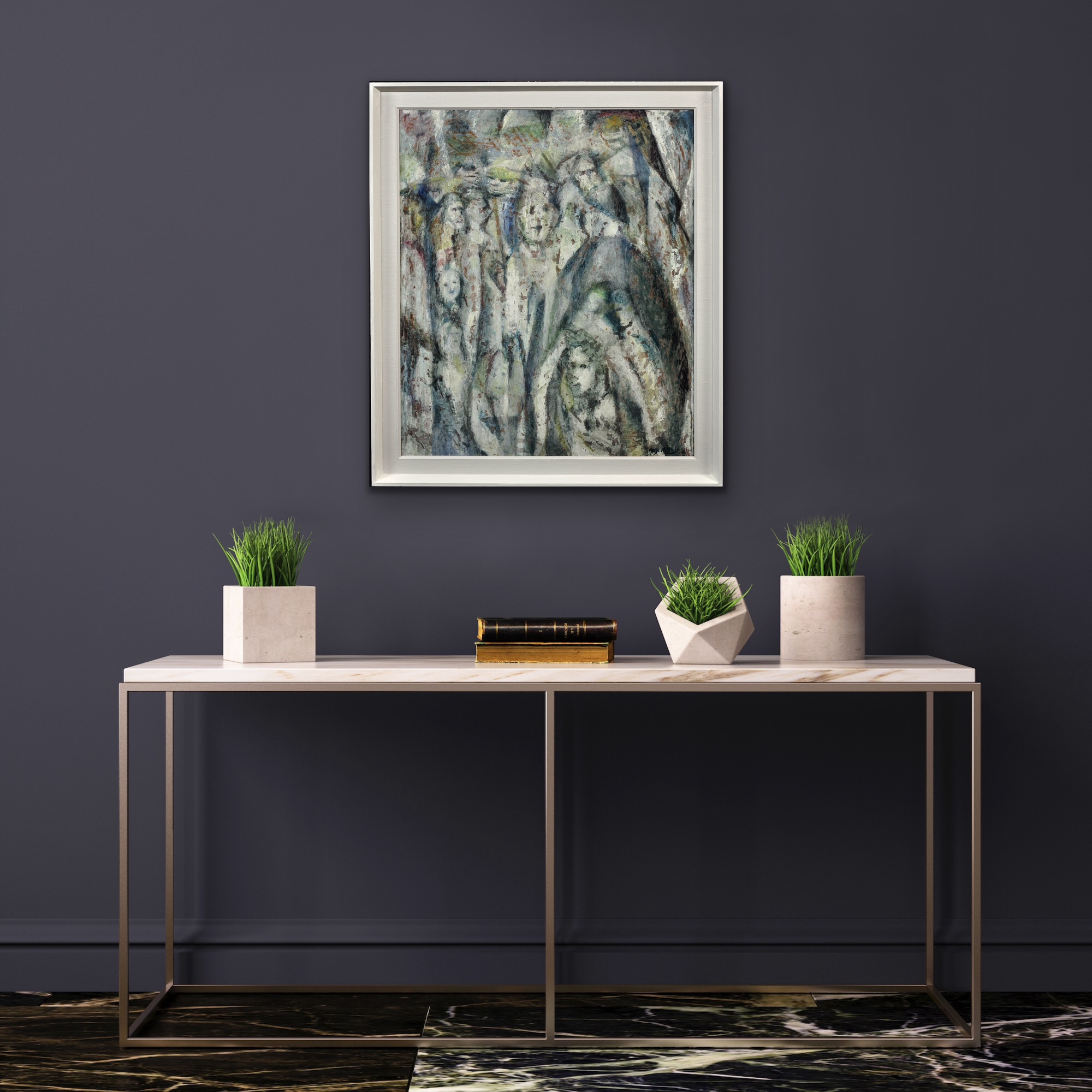 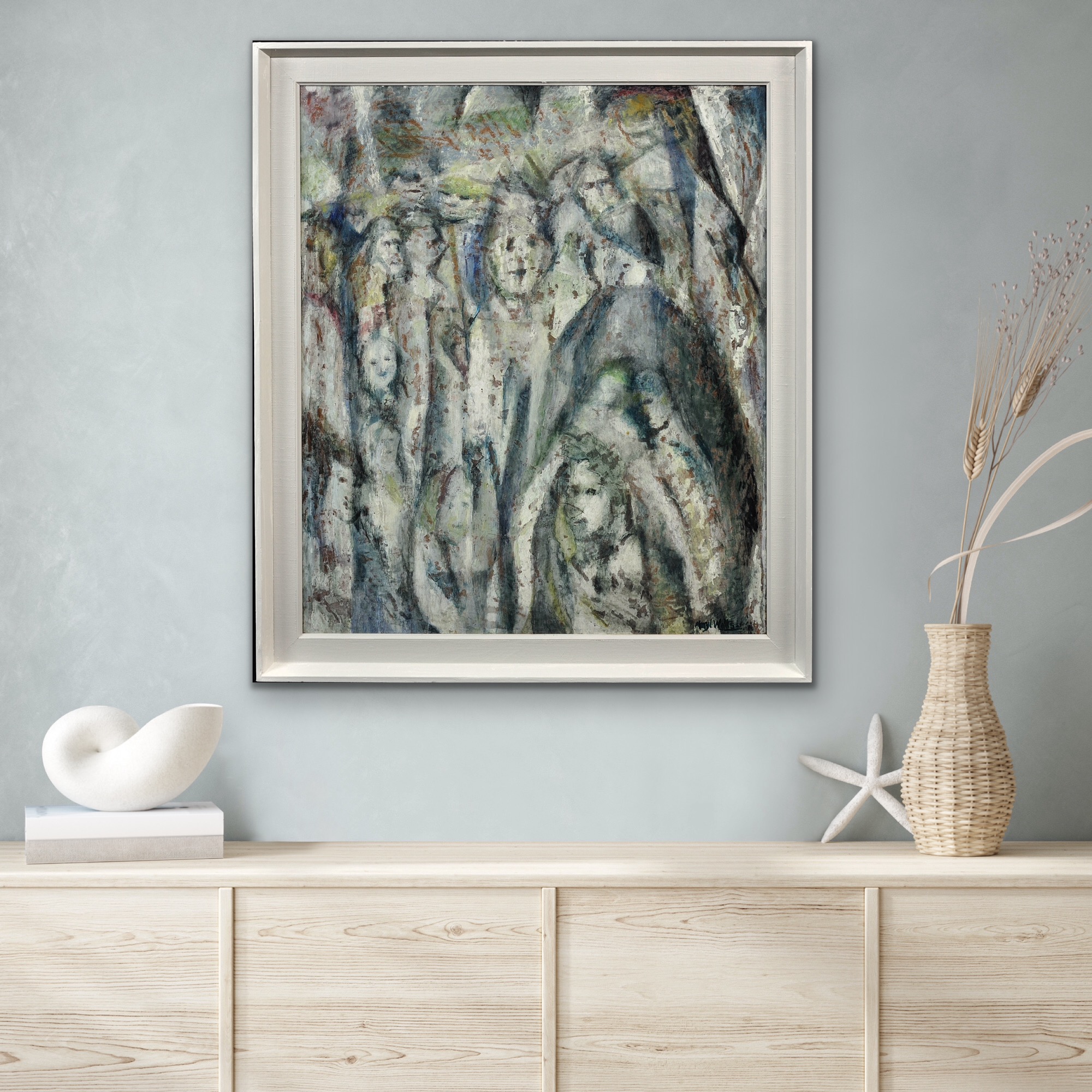 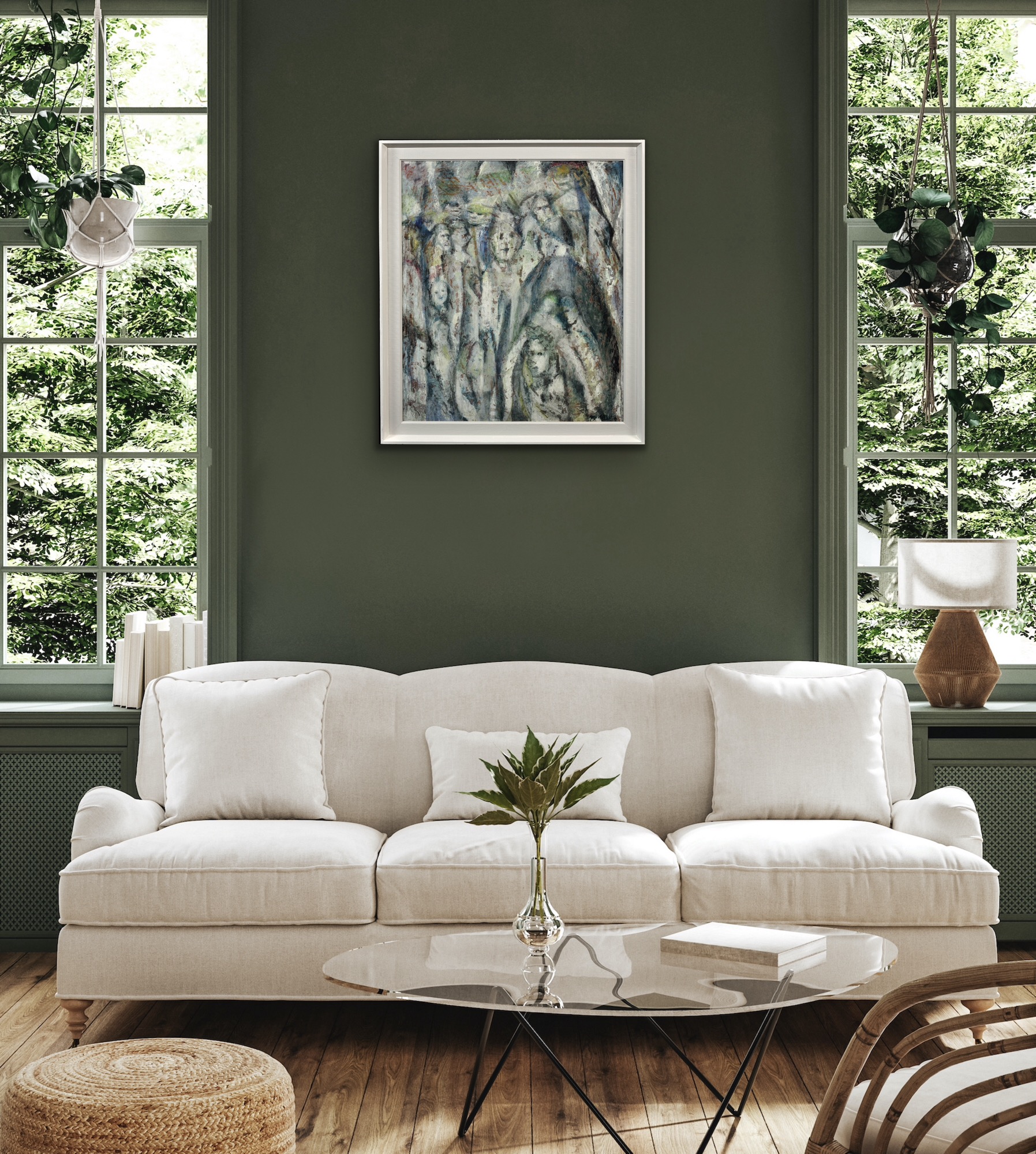 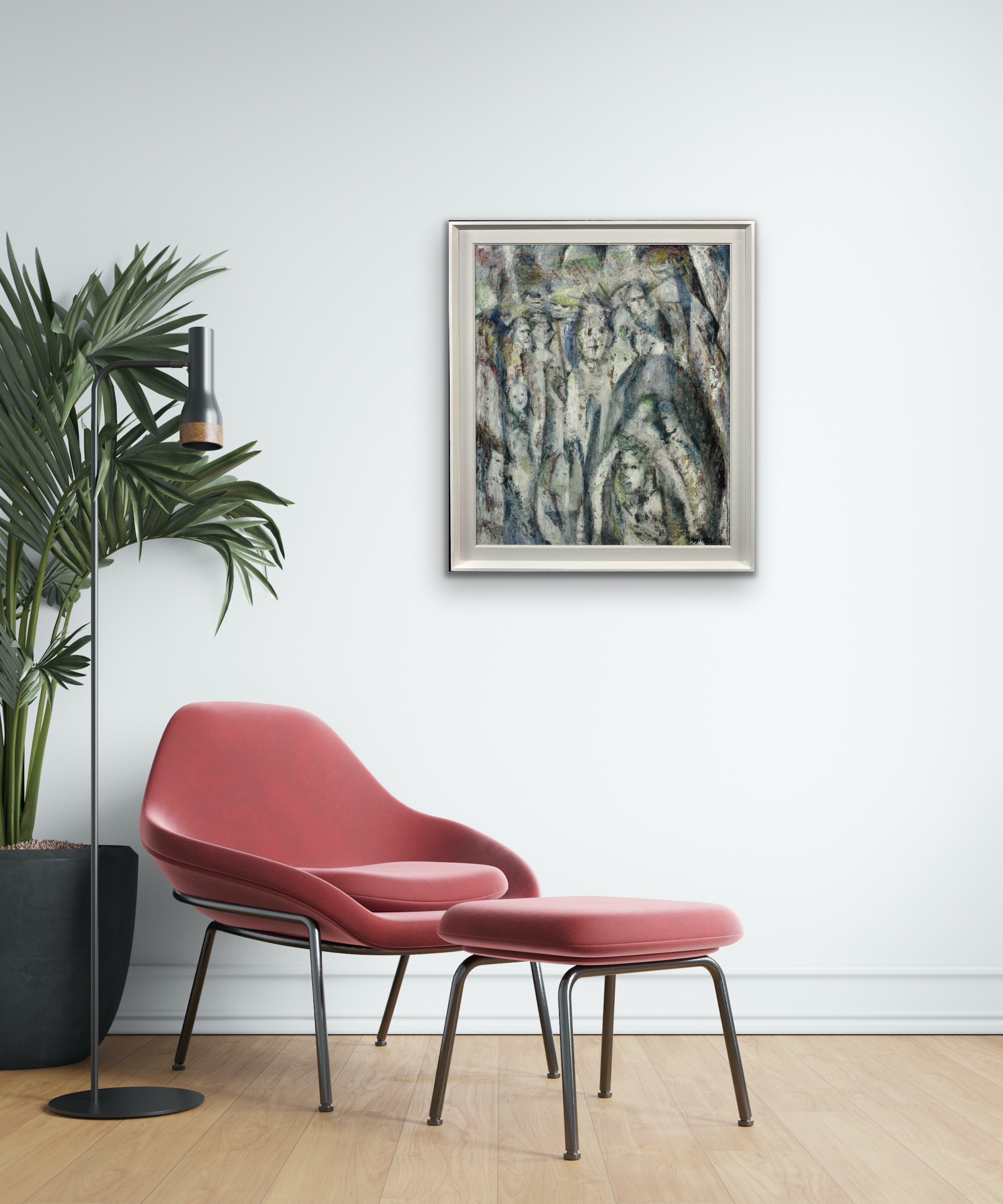 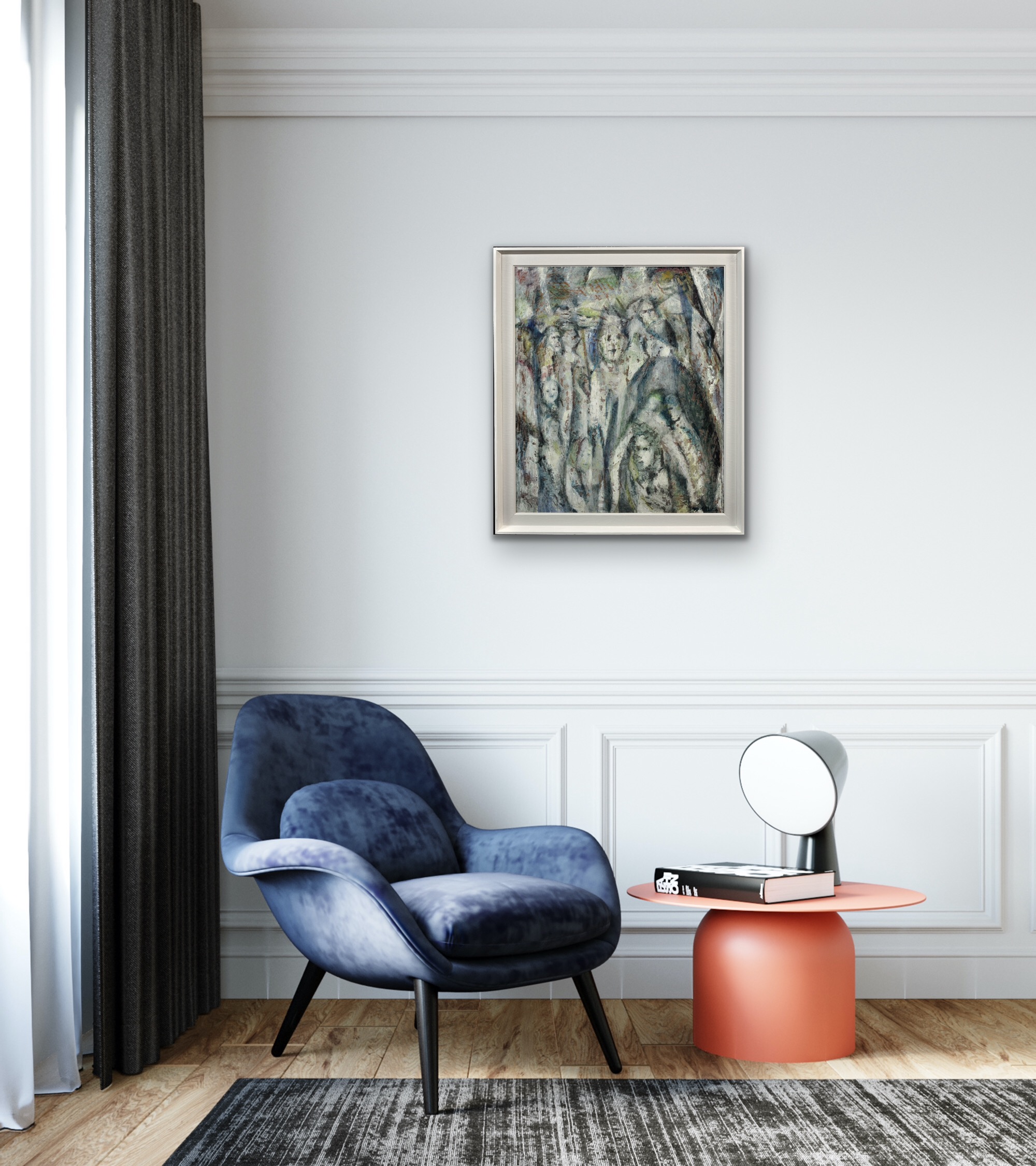 Available for sale from Big Sky Fine Art; this original oil painting by Meryl Watts. The painting was created whilst Watts resided at 1 Bron Avon, Borth-y-Gest, Porthmadog. (Today’s postcode would be LL49 9TU).
The work is presented and supplied in its’ original hand painted frame (which is shown in these photographs).
This vintage painting is in very good condition, commensurate with its age. It wants for nothing and is supplied ready to hang and display.
The painting is signed lower right.

An acclaimed painter in both oil and watercolour, Meryl Watts was proficient in various media, but particularly noted for her woodcuts.

Meryl Watts was born on 5th April 1910, the only child of Charles and Evelin Watts. They lived in Germains Place, Blackheath and she was raised in east end of London where her father was a printer.

She studied at the Blackheath Art School, where the Principal was John Edgar Platt, one of the major artists using the technique of colour woodcut. She learned this technique from Platt and was influenced by his style, as shown in the attractive and colourful designs that she subsequently produced.

Meryl began to work independently in 1937, producing her own work while still living in Blackheath. During World War II the family home and business were destroyed by German bombing and Meryl and her parents were given just a few hours to collect whatever valuables they could before their house was demolished to protect neighboroughing properties from further damage. As a consequence much of her early work was lost.

Having left their home the family evacuated to Portmeirion in Wales, where they had frequently stayed on holiday before the war. They struck up a friendship with the Portmeirion architect and founder, Sir Clough William-Ellis. Portmeirion was founded in 1925 and took nearly fifty years to complete. It was a homage to Sir William-Ellis’ love of the Italian Riviera and incorporated the grounds of a twelfth century castle. The resort became extremely popular with tourists and was the backdrop for various TV programs and films, including The Prisoner. Meryl Watts became artist in residence at Portmeirion, where for the next few years she produced a variety of artwork that included sketches, oil paintings and watercolours of famous scenes from the Snowdonia coastal region and other traditional landmarks. This was a new and very successful chapter of her artistic career.

From Portmeirion Meryl and her parents moved to a rented house in Borth-y-Gest, Caernarvonshire, North Wales. In 1944 Meryl’s father bought the house and Meryl began to work there, using the endless views in the area for her inspiration. After the death of her father in 1957 and her mother in 1969 Ms Watts lived alone in Borth-y-Gest until she married Professor Joseph Allen in 1978. He came from Northumberland, and they subsequently split their time between Northumberland and Wales.

During her time in Borth-y-Gest Ms. Watts was known in the village as “an aloof and eccentric bohemian, wearing exotic hats and constantly smoking cigarettes”. She played an active part of the community, and was involved with all sorts of arts and women’s groups, but she never invited her friends in to her home! She was however a kind person, who for years cared for a well-known itinerant gypsy around the town, when he had no-one else to turn to.

Over the years Ms. Watts turned her skills to many media – she was best known as a woodcut artist – printing up to fifty pieces from each painting, so many people own a limited edition woodcut work. Her original paintings are somewhat rarer. She used Indian ink to create a series of black and white postcards, and also practiced plaster sculpture.

The work of Meryl Watts was shown three times at the Royal Academy, regularly at the Walker Gallery in New Bond Street and also exhibited with the British Council all over the world, including Reykjavik, Prague, Baghdad, Palestine, China, New Zealand, Canada and Britain. Examples of her work are held by the British Council and the Contemporary Art Society

Meryl Watts died in 1992; because of the nature of her work for Portmeirion her art is scattered among tourists and visitors from all over the world. In 2010 there was a major sale of over seventy of her works from the collections of two of her biggest collectors, which fetched record prices.

This is a haunting and atmospheric piece from the former Portmeirion artist in residence. Although largely abstract we see a crowd of people, their faces and expressions, and the soft muted colours promote a peaceful and benign feeling of wellbeing.