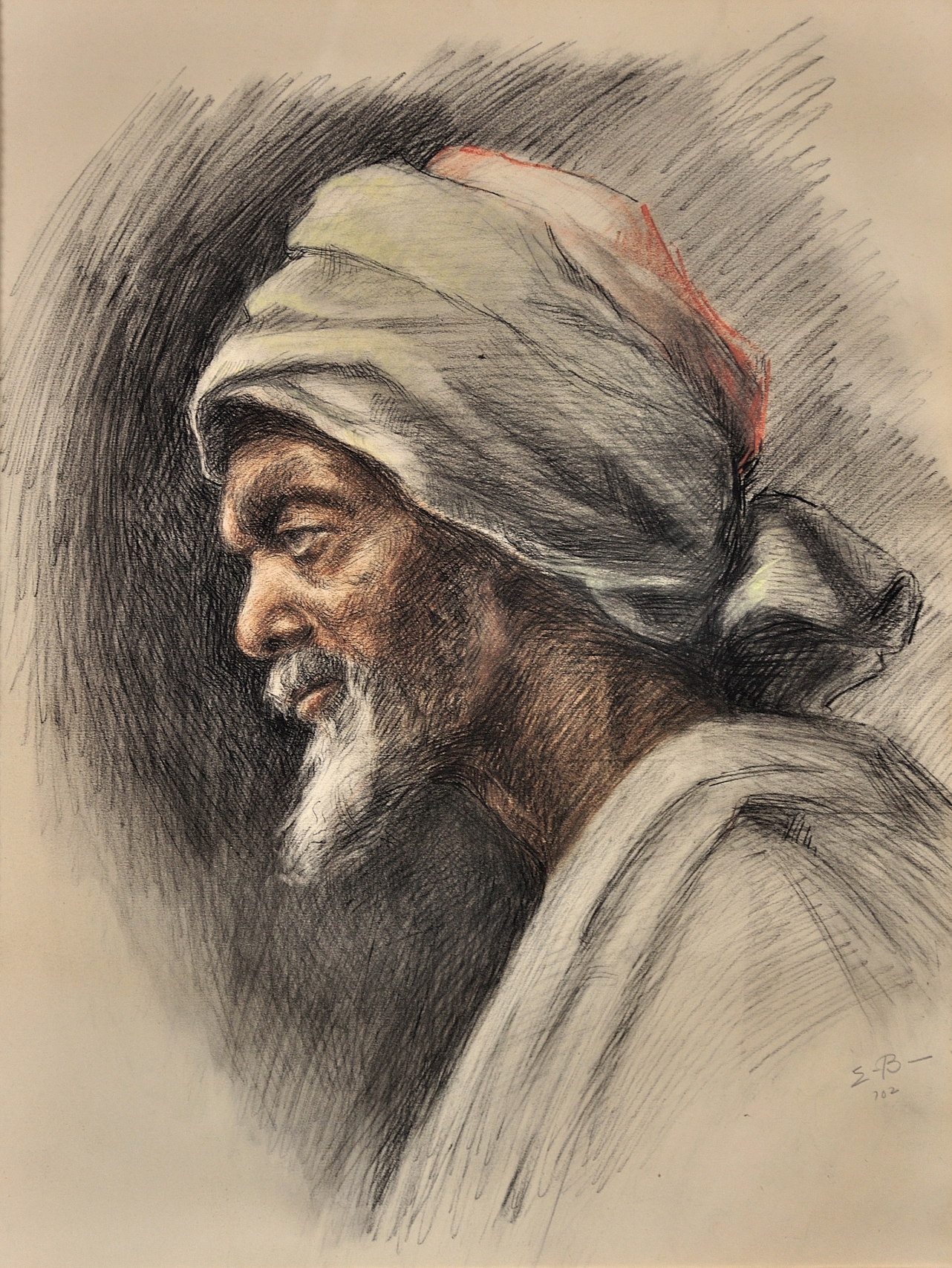 Sold by Big Sky Fine Art; this original drawing by Lady Elizabeth Southerden Butler; dates from around the 1880s.
The work is presented and supplied in a sympathetic contemporary frame, mounted using conservation materials and behind glass.
When the work was removed from its dilapidated original frame an embossed US federal motif (spread Eagle with “In God We Trust” in a riband) was discovered in the top right hand corner of the paper.

Lady Butler was born Elizabeth Southerden Thompson in Lausanne, Switzerland on 3rd November 1846. She went on to become Britain’s foremost battle painter of the nineteenth century, specialising in painting scenes from British military campaigns and battles, including the Crimean War and the battle of Waterloo. Lady Butler was not only extremely unusual in being a woman artist working in the highly masculine field of military art but she was also an innovator, particularly in her sensitive and humane depiction of the ordinary soldier. She was credited with the resurgence of British military art in the nineteenth century.

Elizabeth Thompson was the daughter of Thomas James Thompson and his second wife Christina Weller. Her sister was the noted essayist and poet Alice Meynall. Elizabeth was largely educated by her father, as opposed to the more usual governess at this time, and began receiving art instruction in 1862, while growing up in Italy. In 1866 she went to South Kensington, London and entered the Female School of Art. She made the acquaintance of both Millais and Ruskin. She became a Roman Catholic along with the rest of the family after they moved to Florence in 1869. While in Florence, under the tutelage of the artist Guiseppe Bellucci she attended the Accademia di Belle Arti. She signed her works E.B., Eliz. Thompson or Mimi Thompson (she was called Mimi from childhood).

Initially she concentrated on religious subjects like The Magnificat, but upon going to Paris in 1870 she was exposed to battle scenes from Jean Louis Ernest Meissonier and Edouard Detaille, and switched her focus to war paintings. With the painting Missing a Franco-Prussian War battle scene, depicting the common soldiers’ suffering and heroism she earned her first submission to the Royal Academy. Her first commission, known as The Roll Call, was purchased by Queen Victoria and when shown at the Academy in 1874 became one of the most popular paintings in the history of the Royal Academy exhibitions, requiring its own policeman to control the public. This and other works such as Scotland for Ever, still widely recognised today, became part of the nation’s consciousness and made her a celebrity.

She did not seek to glorify battle, but to show the nobility of the men who fought; her emphasis was on the soldier rather than the officer. In her autobiography, published in 1922 she wrote, “ Thank God I never painted for the glory of war, but to portray its pathos and heroism”

Queen Victoria was an immediate admirer and feminists also held her work as an example of what a woman could achieve in fine art. Her major works were complimented simultaneously for being equal to those of a man and for displaying a womanly sensibility. The impression she made with her set piece celebrations of British soldiery was such that her admirers within the Academy put her up for election to membership in 1879, even though women were not officially eligible. She failed however to be elected by just two votes – this proved to be the summit of her career and she did not stand for election again.

As her paintings toured Europe, along with photographs of Elizabeth, she gained even more notice because people found out that she was both young and pretty, something not normally associated with painters of battle scenes. It also helped that during this time there was an incredible amount of Victorian pride and romanticism for the growing British Empire. Lady Butler’s topics reflected such romanticism but her paintings were generally realistic in detail with aspects such as confusion, mud and exhaustion being accurately portrayed. Her works tend to focus on British troops shown in action, or shortly after it, but avoiding moments of close hand-to-hand combat.

Her career and fame peaked with her marriage on 11th June 1877 to Sir William Francis Butler, a distinguished officer of the British Army, from Tipperary in Ireland. Her marriage broke the hearts of many young men, but enabled her to travel to the far reaches of the Empire with her husband. Together they raised six (five?) children. During her marriage Lady butler came under the influence of her husband’s belief that the colonial imperialism of the United Kingdom and other European powers might not be in the best interests of the native people on far-off lands. However she continued to paint scenes showing the valour of the ordinary British soldier. She also did some black and white illustrations, including of poems by her sister, and of works by Thackeray. Her popularity as an artist waned after the 1870s although she continued to paint until 1929.

When her husband retired from the army she moved with him to Ireland, where they lived at Bansha Castle, County Tipperary. She showed pictures at the Royal Hibernian Academy from 1892. Among the paintings that she took with her to Co. Tipperary was a set of watercolours that she had painted while with her husband in Palestine. During the Irish Civil War they were transferred to her daughter in Gormanston Castle for safekeeping, but were almost all destroyed later by German bombs during World War II.

Lady Butler was widowed in 1910, but continued to love at Bansha until 1922, when she took up residence with the youngest of her six children, Eileen, Viscountess Gormanston, at Gormanston Castle, County Meath. She died there on 2nd October 1933 shortly before her 87th birthday and was interned at nearby Stamullen graveyard.

It has been said that Lady Butler has a dual claim to fame. She pioneered a new, more realistic depiction of warfare in British painting, one which was to prove immensely influential at the end of the nineteenth century. And she briefly enjoyed critical and popular success of such magnitude that, for a while, it seemed a new era for women artists in Britain was about to dawn.

A major retrospective exhibition of her work was presented by the National Army museum in 1987 and today they hold many of her paintings and drawings.

An online book was published on 3rd October 2012 by Project Gutenbuerg called From Sketchbook and Diary by Elizabeth Butler. It comprises a collection of her diary entries and sketches as she travelled around Ireland, Egypt, The Cape and Italy. Chapter II covers Egypt and the descriptions and sketches she made there are consistent in every way with the drawing of the tribesman we have here. It seems very likely that this sketch was one of those she made during her stay in Cairo around October/November 1885. The sketch in the book of a Cairo Bazaar is strikingly similar. (see pages 33-88).