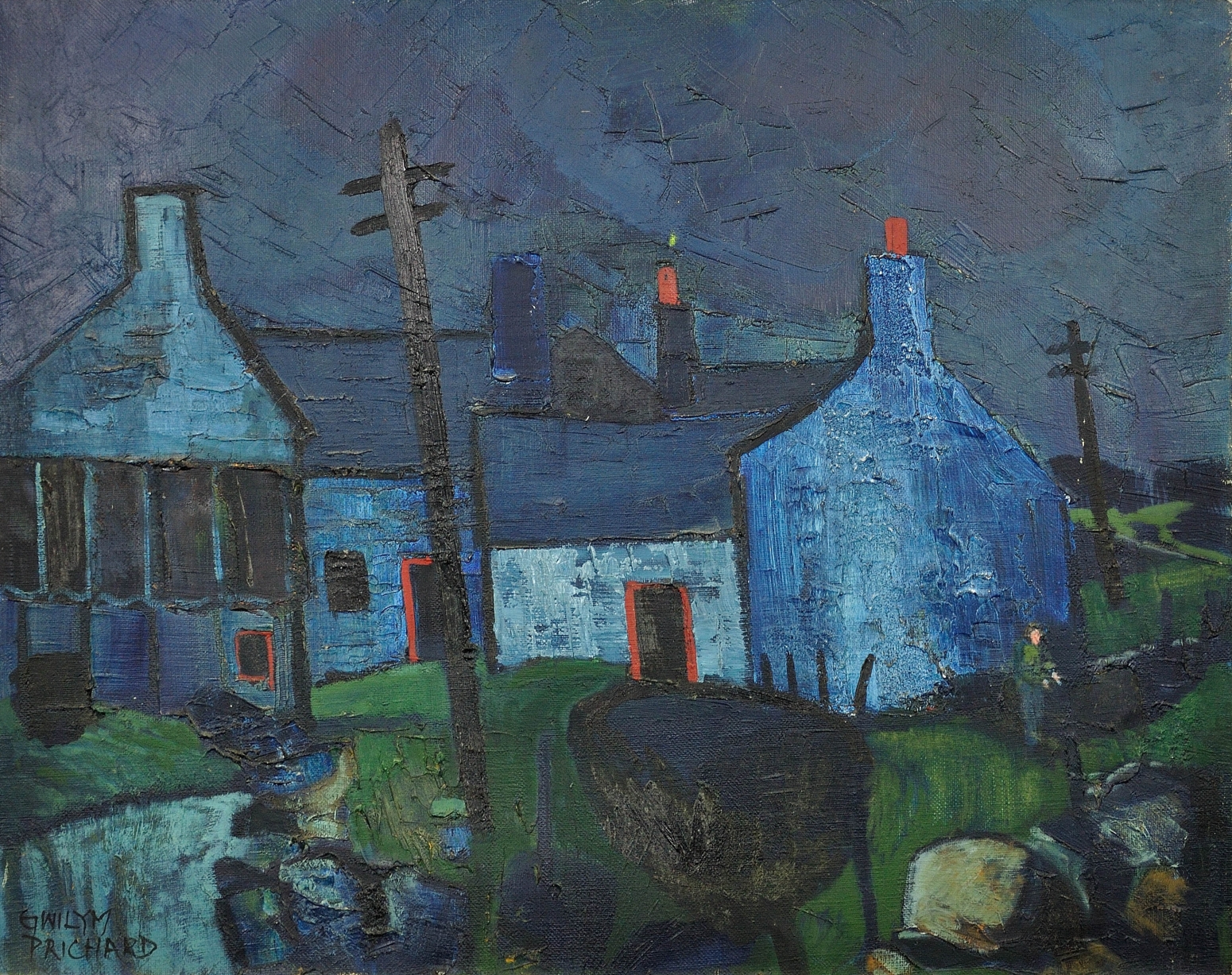 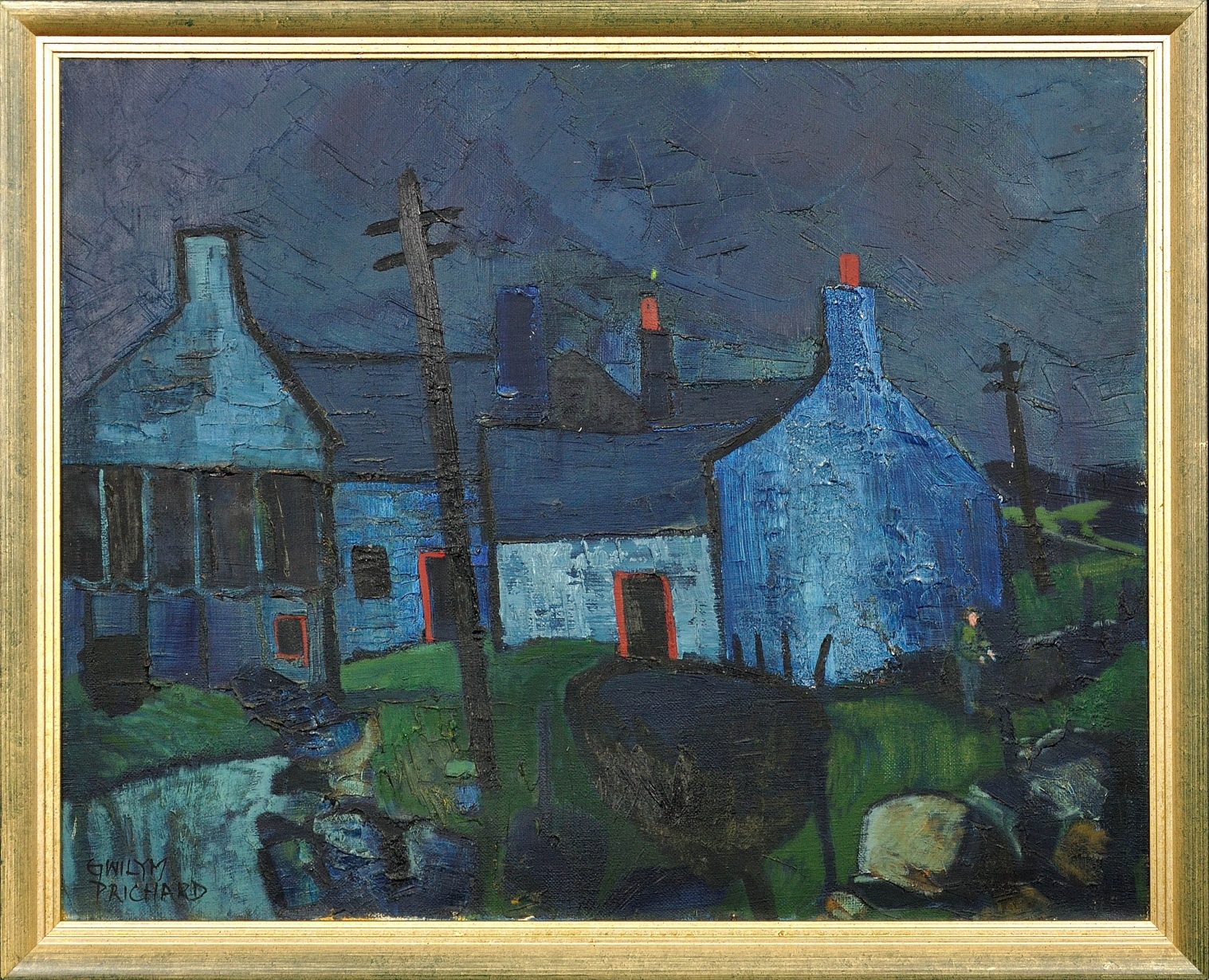 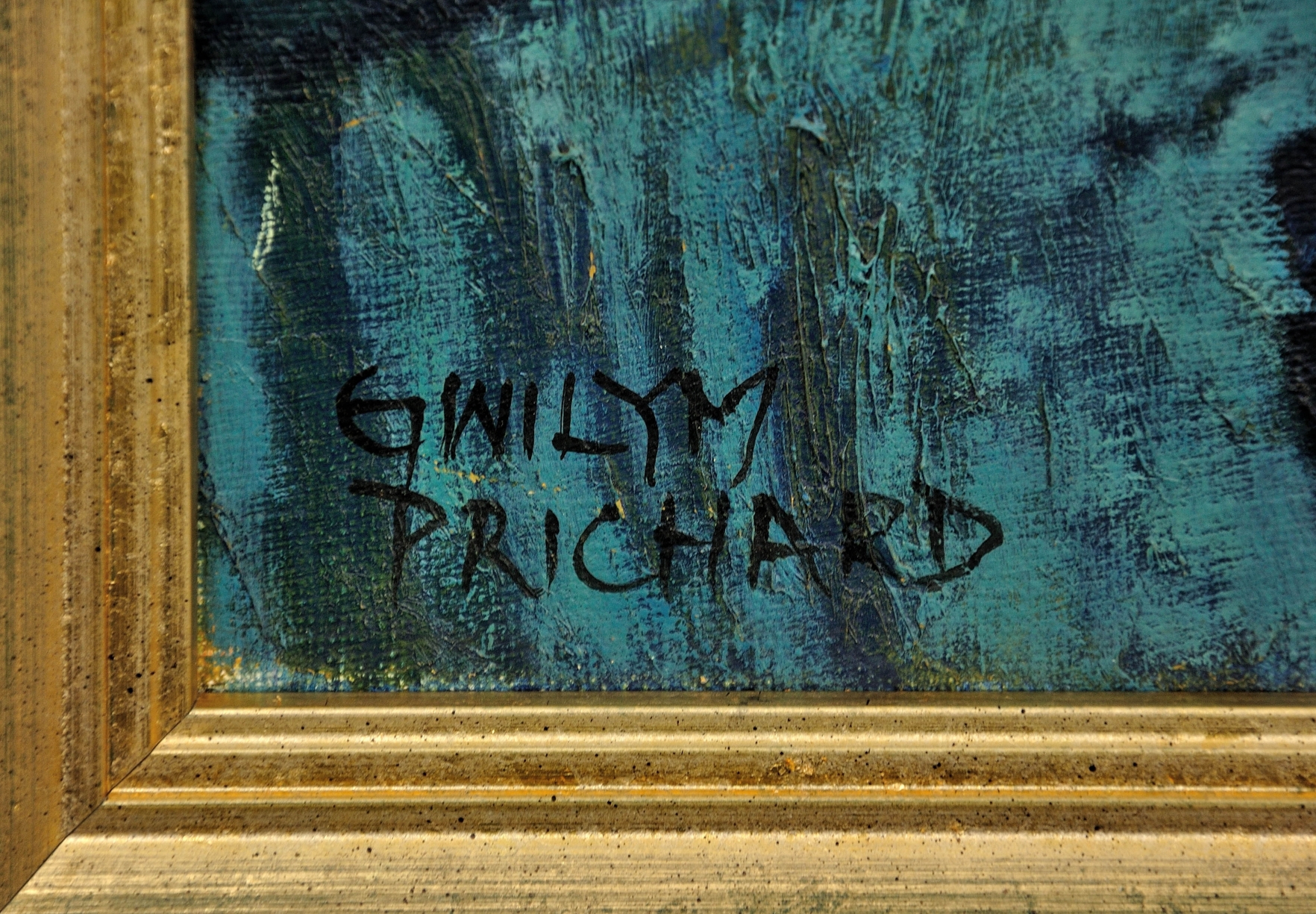 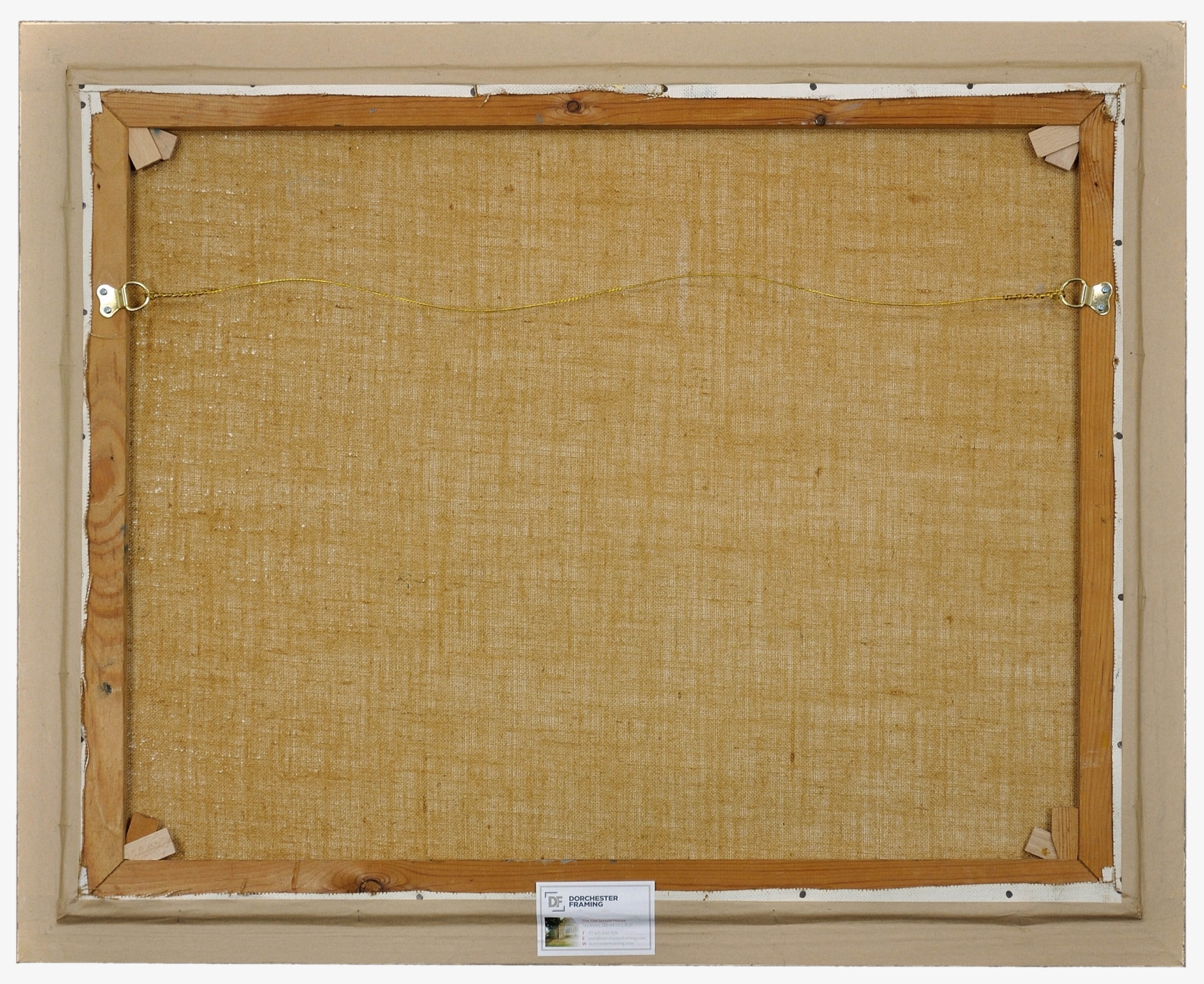 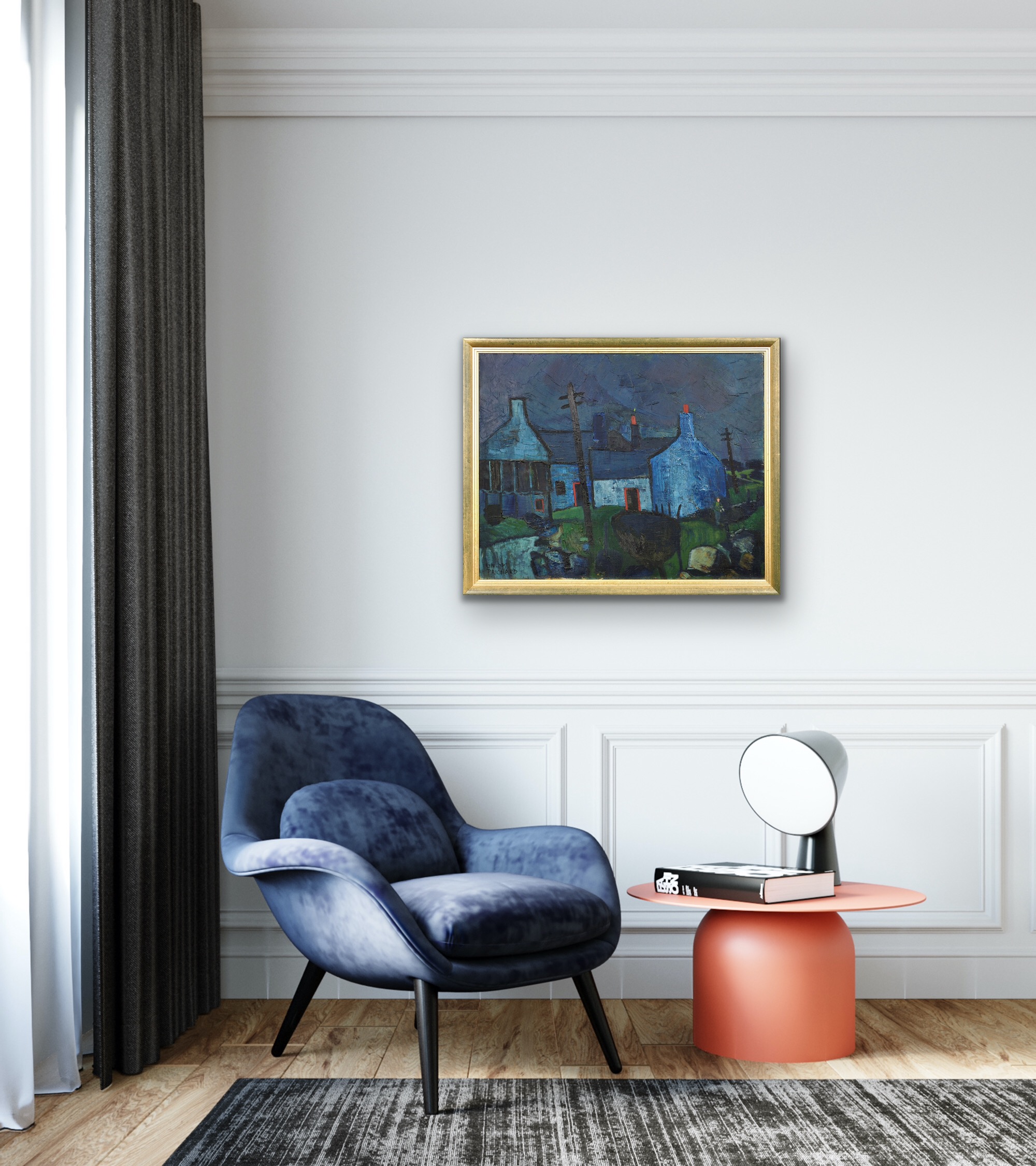 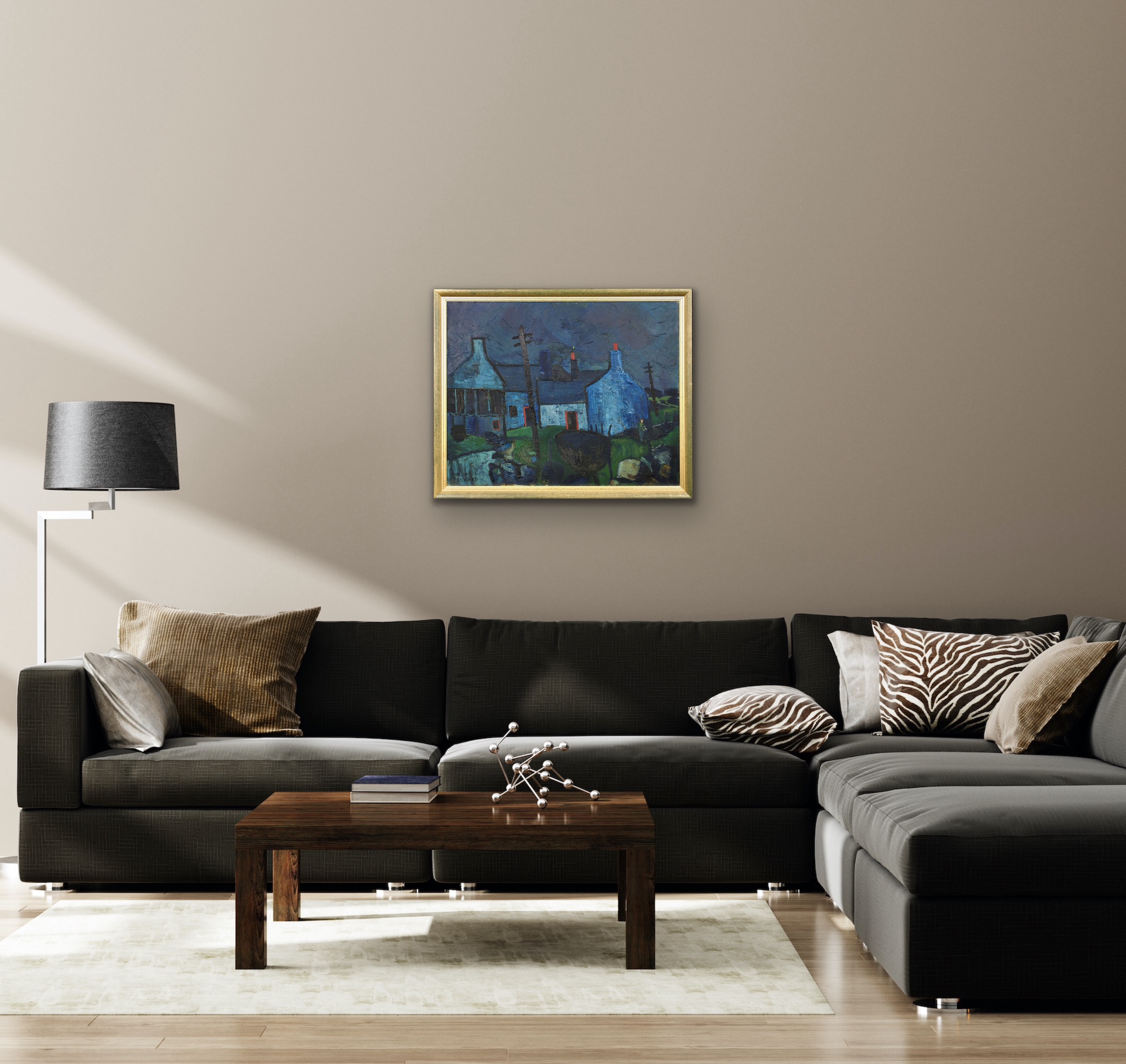 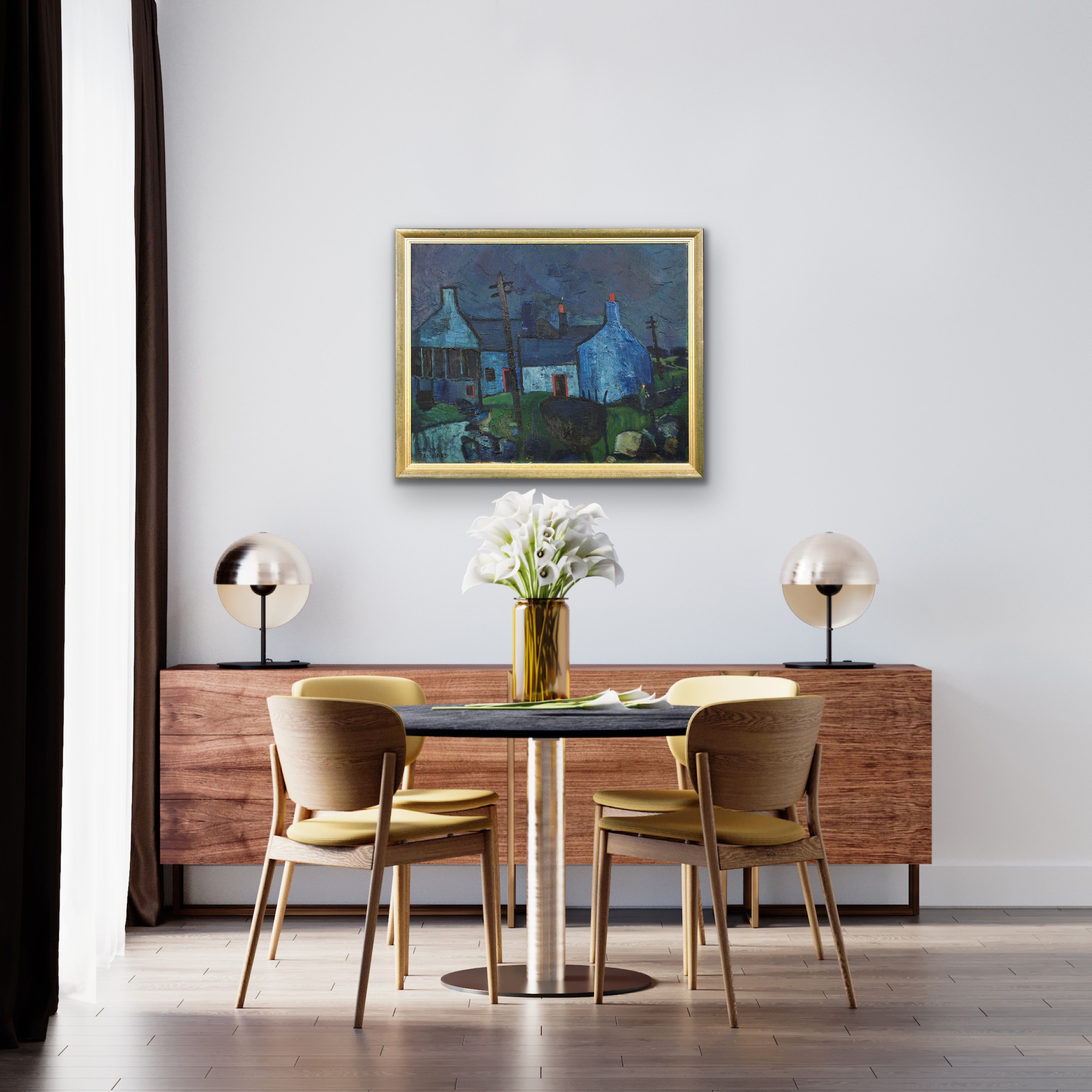 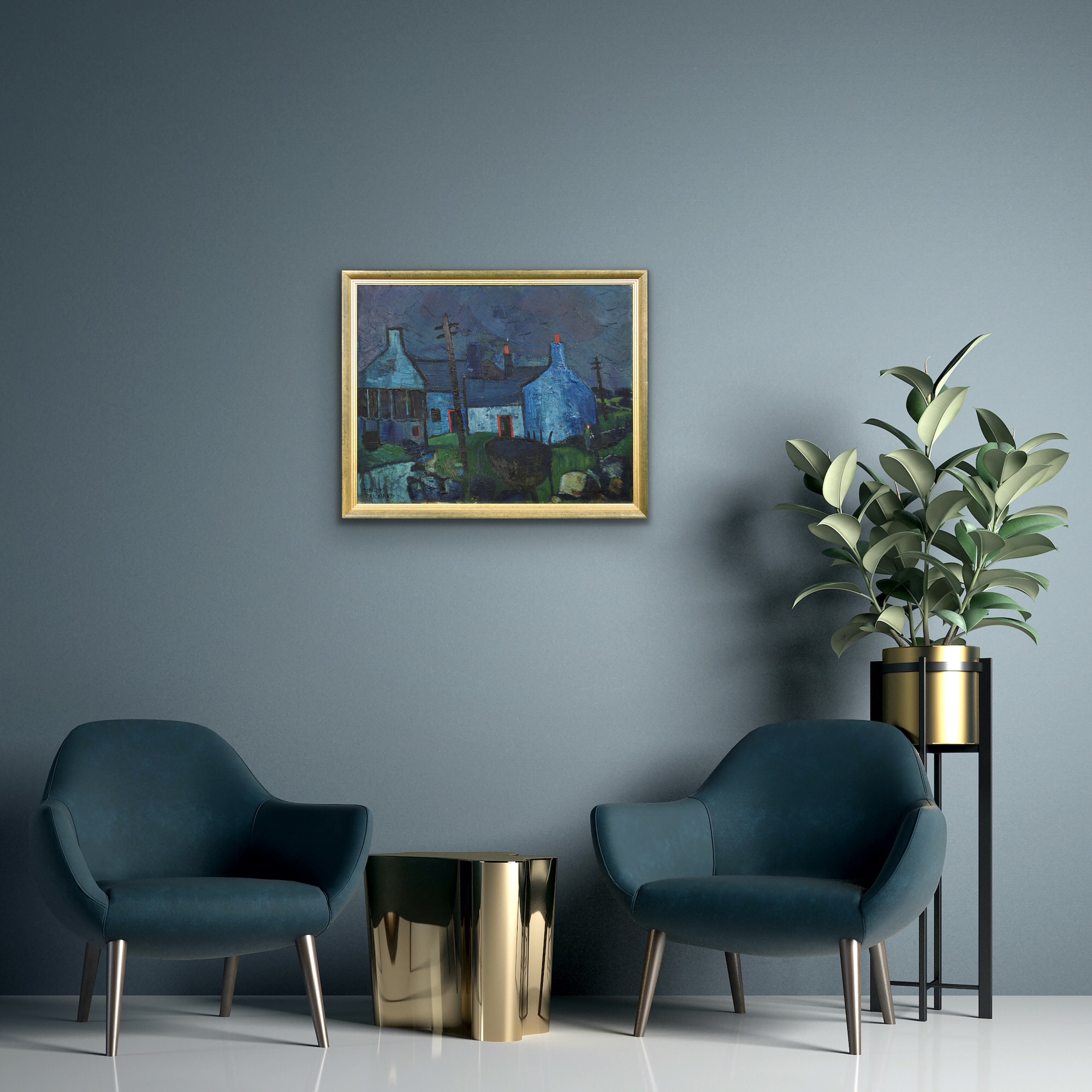 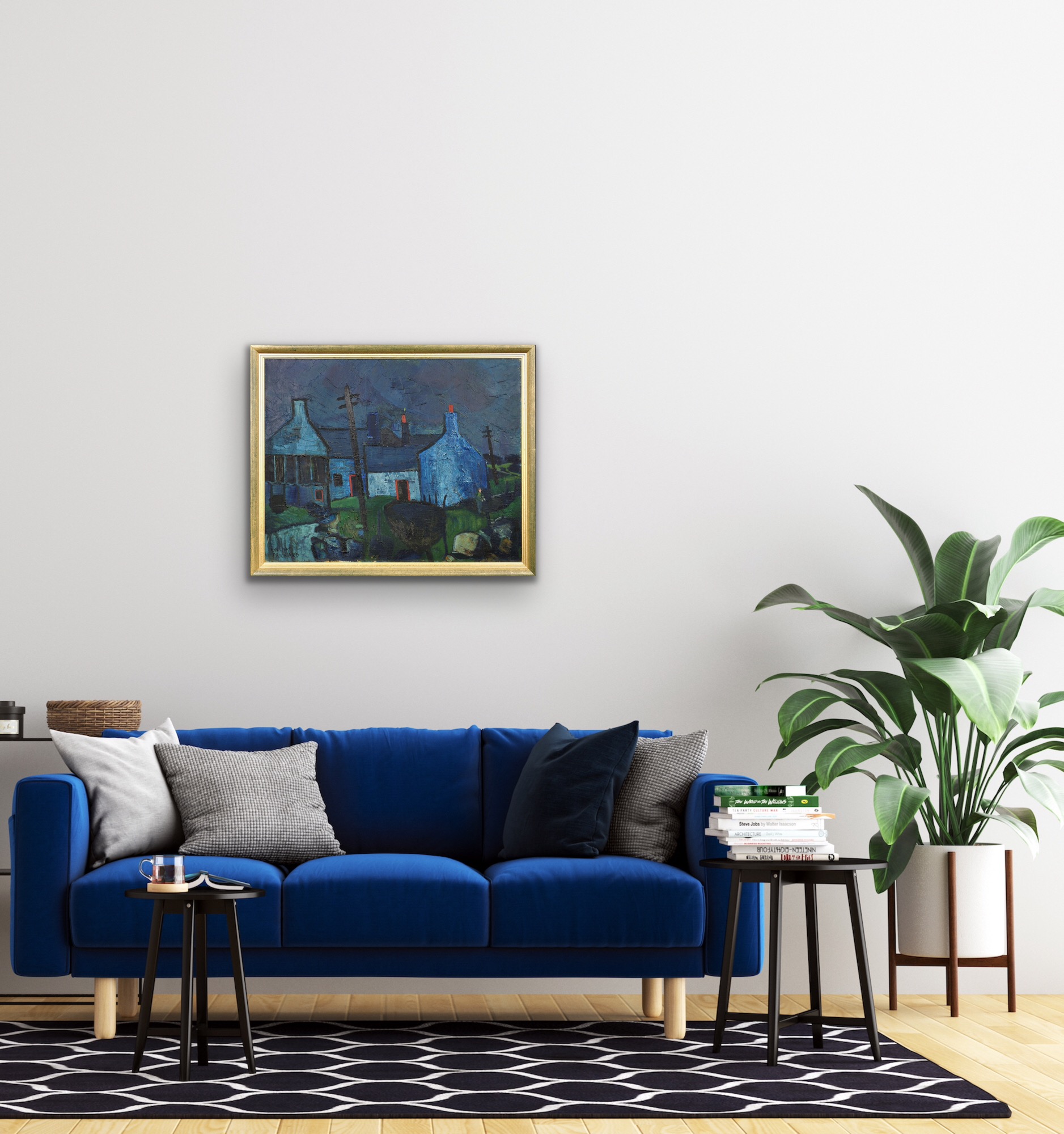 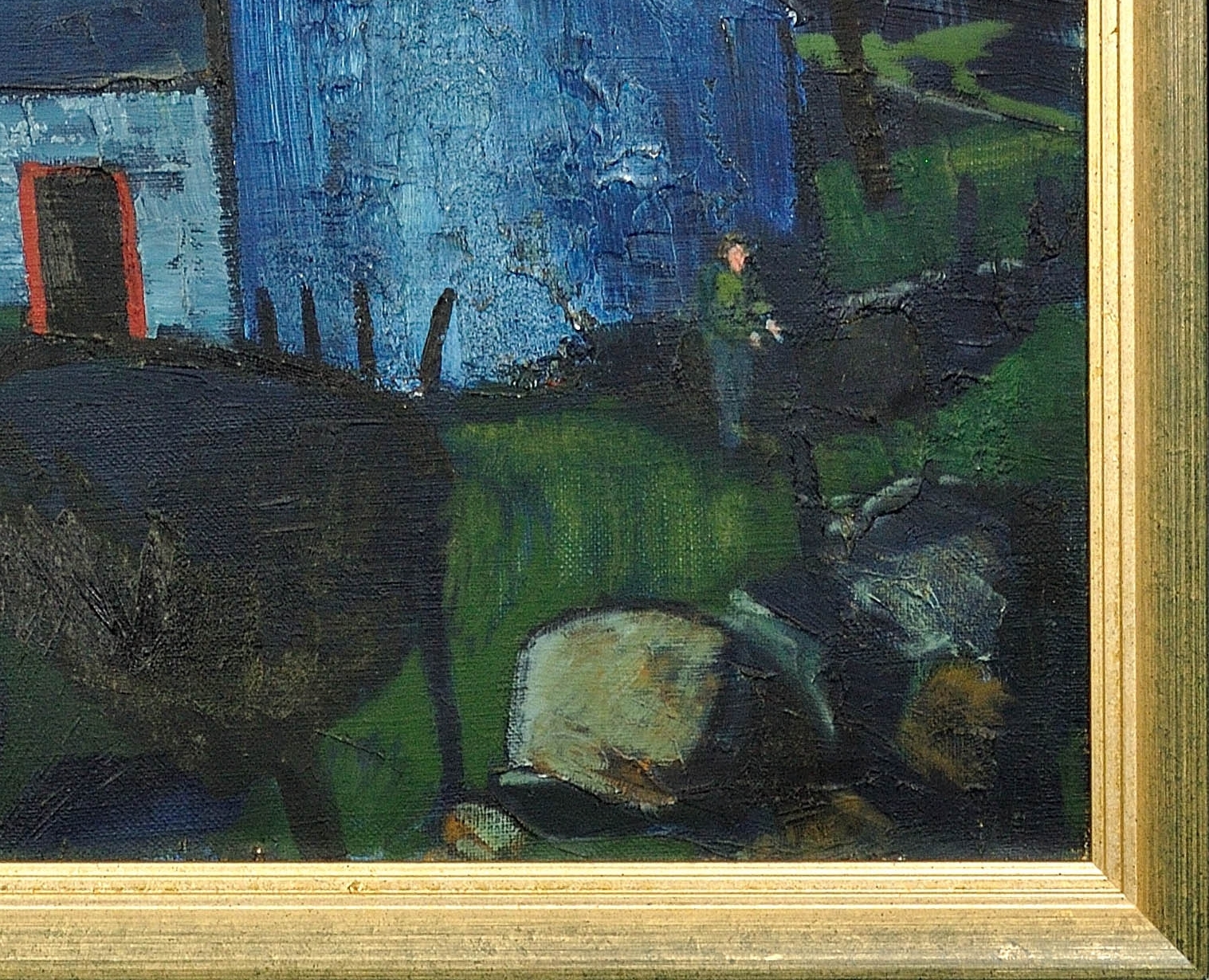 Available for sale from Big Sky Fine Art is this original oil painting by the Welsh artist Gwilym Prichard dating from the 1970s.
The painting is presented and supplied in a new contemporary frame that compliments the artwork’s colouration (which is shown in these photographs), the artwork never having been framed before.
This vintage painting is in very good condition. It wants for nothing and is supplied ready to hang and display.
The painting is signed lower left.
Provenance: Direct from the artist’s family having never previously been offered for sale.

Gwilym Prichard was one of the most admired and successful painters of the Welsh landscape. Indeed, after the death of Sir Kyffin Williams in 2006, he was considered to be the senior figure in Welsh landscape painting. He liked to experiment in pastel, gouache and collage as well as watercolour, but his preferred medium was oils. He was noted for using a colourful palette and generous application of paint. It has been said that he “painted the bones neath the land.” His life, like his art, was full and colourful.

He was born Gwilym Arifor Pritchard on 4 March 1931 in Llanystumdwy, Caernarvonshire, north Wales. He later changed the spelling of his surname to Prichard (no ‘t’) when he discovered another artist of the same name.( His son, Ceri Pritchard is also an artist and has reinstated the ‘t’ in the spelling of the family surname ).Until the age of eight young Gwilym spoke only Welsh. His father was a schoolmaster, but Gwilym often skipped off school to go fishing. Once, whilst he was fishing, an old man with a shock of white hair, dressed in a black hat and coat, began to chat to him in Welsh. Gwilym was a generous boy and gave the old man all the fish he had caught. He discovered later that the old man was the former British prime minister David Lloyd George; when he died he left Pritchard all his fishing tackle in his will.

Pritchard studied at Normal College, Bangor, 1951-53, and had planned to be a chemist, but he fell for a young woman, Claudia Williams, who had just moved to north Wales with her parents. He later said that “Love and art hit me at around the same time”. In order to woo Claudia, he took up art, and when she went to study art at the Chelsea School of Art he went to the College of Art in Birmingham. They married in 1954 and went on to enjoy a creative and romantic journey that spanned seven decades. They worked alongside each other and raised four children. They had different strengths but complemented each other in every way; Pritchard was gentle and reserved and became celebrated for his skill in capturing the wild beauty of Snowdonia and other landscapes, whereas his dynamic and outgoing wife was a figurative artist, fascinated by the people in her life. Their enduring partnership was the subject of several radio and television documentaries.

Pritchard worked as a teacher in schools in north Wales and England from 1954-73, although he painted as much as possible at the same time. The family moved often, but settled for a while on Anglesey, which became an area of key importance to Pritchard’s painting. In 1958 he won a prize at the summer exhibition of the Royal Cambrian Academy and during the early 1960s he started to exhibit regularly at the Mansard Gallery in London, soon gaining national recognition. In 1973 Pritchard stopped teaching and became a full-time artist. The family moved to near the border with England, after which he was commissioned to do some work by the British Army in Belfast. Thus, at the height of the Troubles, Pritchard, accompanied by two bodyguards, found himself painting soldiers on the streets of Belfast. In 1978 Pritchard received an East Midlands Arts Association bursary to make a record of National Trust properties in the St. David’s area of Pembrokeshire. In 1979 Pritchard returned to north Wales, where he taught again at University College, Bangor’s extra-mural department, and at Plas Tan Y Bwlch, Maentwrog.

In the 1980s Pritchard and his wife decided to undertake a road-trip to Greece, their children having grown up and left. They set off for a three-month trip to the island of Skiathos, but got somewhat distracted on their return journey through France and ended up living in Brittany for 17 years! They lived for most of this time in a former bakery in the charming hilltop town of Rocheforte-en-Terre, where they set up a small art school. They returned to Wales in 2001, living in several places, including near Caldy Island. The couple eventually settled in Tenby. Pritchard continued painting almost until the end of his life; up to the age of 81 he would regularly drive his camper van into the wilds of north Wales, where he would sleep under the stars and paint the landscape that he loved. In 2013 a major exhibition of his work was held in Cardiff. In 2015 he was elected for the Eisteddfod Gorsedd of the Bards, a gathering of artists, writers and musicians deemed to have made a notable contribution to Welsh culture. Sadly, he died at home on 7 June 2015, aged 84.

Pritchard’s work invigorated British landscape painting through his particular brand of observation and understanding. He said that he painted the land and farms and sea and sky because they shaped his life. He described his approach as emotional rather than analytical. Even when a finished work tended towards abstraction, he insisted it must have its foundation in reality, and that it must not be so far removed as to have lost the first inspiration.

Amongst his many accomplishments Pritchard had been a Fellow of Bangor University and a Member of the Royal Cambrian Academy. He had completed several commissions for Gwynedd Artists, was awarded the West Midlands Arts Association bursary in 1978, and the Silver Medal from the Academy of Arts, Science and Letters in Paris in 1995.

Pritchard took part in numerous national and international exhibitions, including the Royal National Eisteddfod of Wales 1955-60 and 1963. He had regular solo exhibitions at all the major Welsh galleries between 1958 and 2002, including the Howard Roberts Gallery in Cardiff, the Attic Gallery, Swansea and the Martin Tinney Gallery, Cardiff. He and his wife had also had several successful joint exhibitions.

Today the work of Gwilym Prichard is held in many public collections including the Arts Council of Wales, the Contemporary Art Society for Wales, the Government Art Collection, Lincoln College, Oxford, Southampton Art Gallery, the Universities of Aberystwyth, Bangor, Glamorgan and Swansea and the National Library of Wales.

This stunning original oil on canvas painting by Gwilym Prichard is called Anglesey Farmhouse and shows a building that would have been familiar to the artist when he lived on the island. The building is depicted in solid shapes and shades of blue, but the doorways and tips of the chimneys have been accentuated in bright red, giving an impression that it is cold on the outside, but warm in the heart of the home. There is a figure at the end of the property, who appears to be holding something white in his hands – perhaps this is the farmer bringing in the milk bottles left at the end of his drive! There is green grass all around the farmhouse, and a rough stone wall in front, and what appears to be a feeding trough for animals in the foreground. There are two wooden telegraph poles, one either side of the house, representing a connection with the outside world, and the sky above is a deep indigo blue. This is likely to be first thing in the morning, just before daybreak. 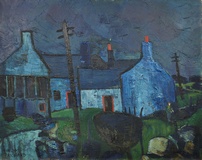